May the 4th Be With You! Wednesday’s MiLB Recap 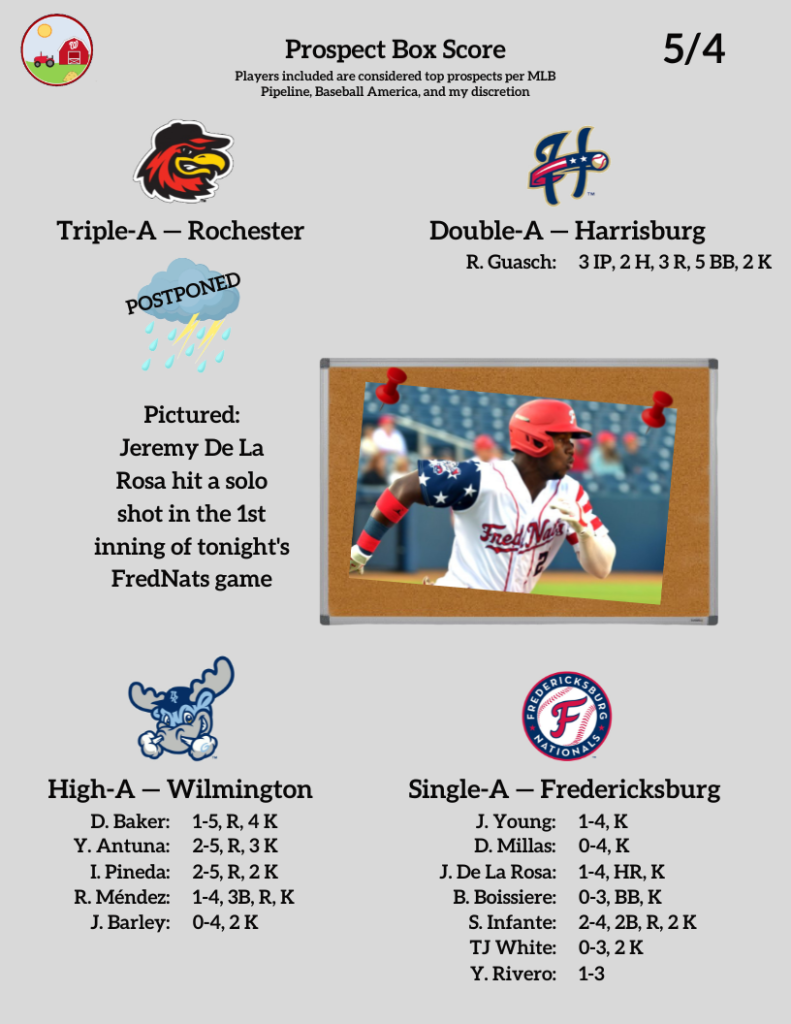 May the 4th be with you, and Happy Star Wars Day!

On this fine Wednesday, the FredNats played their first game against the Hillcats due to a rainout last night.

Wilmington is coming off an emotional walk-off win courtesy of Darren Baker on the night his dad, Dusty, won his 2,000th game as a major league manager.

The Senators are also coming off a big win over the Baysox.

The Red Wings couldn’t get their game in due to rain in Rochester.

Alvarez went the rest of the game (two innings) while allowing two runs (1 ER), four punch outs, and no walks as well. Both pitchers pitched well today, however it wasn’t good enough for the win, FredNats lose 4-2.

The juggernaut offense mustered all of two runs in a losing effort. The first coming from a Jeremy De La Rosa solo shot in the 1st inning and the second from a sacrifice fly from catcher, Geraldi Diaz.

It’ll be interesting to see how this offense does without Brady House. Today was an indication that he will be sorely missed.

The Bowling Green offense got out to an early lead against Michael Cuevas and never looked back. They knocked him around for five runs by the 3rd inning then tacked on another one in the 5th.

The Blue Rocks would respond with six runs of their own via multiple RBI singles from Kevin Strohschein, a Jose Sanchez RBI single, and an Onix Vega RBI groundout.

Israel Pineda, Yasel Antuna, and Strohschein were the only hitters to have multiple hits (the last had three), however seven of the nine hitters in the starting lineup tallied a hit. It’s also worth noting that they struck out a combined 13 times and walked once.

On a dreary afternoon in Bowie, Harrisburg’s pitchers had a rough day. Their starter, Richard Guasch, struggled mightily. Guasch consistently fell behind hitters throughout the game and ended up walking five of the 17 he faced. In total the Senators pitching staff issued 11 walks and four of the five pitchers gave up multiple runs.

The offense had only scratched two runs across heading into the 8th, but that would change.

Brad Lindsly drove in Justin Connell with a sacrifice fly after Connell found himself on third base due to back-to-back fielder’s choices and an error by the Baysox first baseman. Entering the 9th, the Sens were still down big, 10-3.

Red-hot Jake Alu led off the inning with a single then Wilson Garcia brought him around with a big fly. Four of the next five batters singled and the Sens cut the lead to three runs.

It was a heroic push, but the 9th inning rally would end with that, ultimately falling short. Senators lose 10-7.

The Red Wings’ game against the Scranton Wilkes-Barre RailRiders was postponed due to rain and will be played on Saturday, the 7th.

Top prospect, Brady House was moved to the 7-day IL today for an undisclosed injury. This comes after he was out of the lineup for Tuesdays game (later postponed).

On the other hand, Jackson Rutledge was activated from the IL after he started the season in Florida to nurse a bicep injury.

We also saw TJ White back in the lineup tonight since his leg injury in last week’s series.