Opinion: The CBA didn’t do enough for the fans 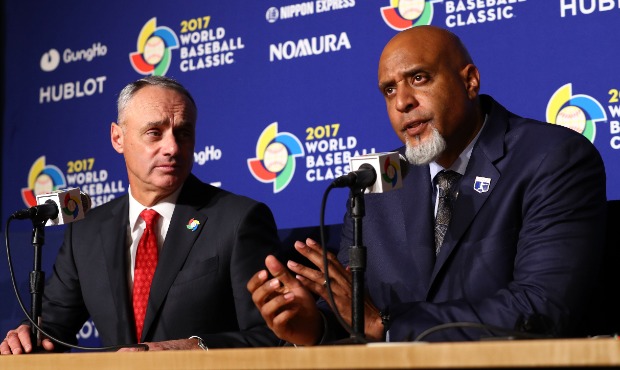 Most fans have already forgiven Major League Baseball for the self-imposed lock-out that lasted 99 days. It delayed Spring Training camps from opening on-time and Opening Day was pushed back. We were supposed to be playing real baseball games today.

This collective bargaining agreement (CBA) was the one that player-union-rep Max Scherzer seemed to indicate would make the game better for the fans. Some fans, maybe, but not this fan. While the anti-tanking measures were a good start, it didn’t go far enough. They instituted a universal DH, but many fans like myself liked the National League game “as is” with pitchers batting just like they did 120 years ago. The rest of the CBA squabbling was just the typical finger-pointing and tug-of-war about money. In the end, the fans didn’t get much and were short-changed as usual.

The biggest issue for fans isn’t the length of the games — it is the retention of star players. Braves’ fans finally found out what it’s like to lose a star player.  They lost Freddie Freeman to Tinseltown. Without a CBA initiative for teams to retain their stars, this will continue to happen over and over. The pressure is usually on the team, or in Freeman’s case, most of the blame seemed to go on his agents for his departure. The Orioles dubbed the Yankees the “Evil Empire” when they signed Mike Mussina in 2000. Orioles’ owner Peter Angelos turned the tables on the Yankees and made them the target of the fan’s anger. But Nats’ fans seem overly ready to blame ownership 100 percent when they haven’t retained star players like Bryce Harper and Anthony Rendon. Without a way to retain stars, isn’t this on MLB and the union to figure this out?

All of the major sports, except for baseball, has a star retention system. My plan was simple and I have vetted this with insiders who liked it from both the player’s side and the team side. Here’s the plan:

There are pros and cons of this system. The MLBPA could say that taking the current team out of the negotiations could lead to a lower offer, but let’s face it, the current team is rarely in it on most of these negotiations at the end. Because of the CBT clause in #6, spending should increase by design. The teams could say that this will make them look bad if they don’t match as they will be exposed to their fan base.  Yes, once an for all we will know the truth, and the fans deserve to know that. Would Atlanta have matched Freeman’s offer with the Dodgers? Would Houston had done it with Carlos Correa? Would the Dodgers have done it with Corey Seager?

This could also change the dynamics of trading a player like Scherzer and Trea Turner at the trade deadline.

The next item tops my list of pet peeves. The rain delay situation has been topping ten games a season for the Washington Nationals. Sure, it was worse when the Marlins did not have a roof on their stadium, but with modern technology and all of the money lost when rain is in the forecast, game day ticket buyers who would walk up the day of the game to buy a ticket decreases, and food and beverage sales are lost. So with all of the millions at stake with these stadiums that could stand for 30+ years, why doesn’t MLB require retractable roofs for most teams? Sure, the extra $150 million sounds like a ton of cash, but financed over 30-years is only $6 million a year with interest.

A stadium with a retractable roof could then be used for year-round events such as concerts and other large scale indoor events. Maybe the teams can’t make up enough revenue to cover the costs of a roof, and it really is about the economics. But when people complain about the length of games, sitting for two hours through a rain delay is awful given the technology that allows for a roof to open and close with the click of a button.

Getting back to tanking teams, the new CBA sure had no effect on those tankers this year. We will once again pick on the Nats’ closest neighbors to the north in Baltimore as they have been tanking hard since 2018 and have averaged 111 losses per full season which is mind-boggling why they are still tanking. The Orioles are picked to be dead last in the MLB again by Fangraphs. Their roster is made up of what appears to be 22-players who will earn near league minimum of the 28 on their Opening Day roster. Spotrac projects that the O’s Opening Day payroll will be under $32 million. That number is below what the Nationals are paying just Stephen Strasburg this year.

MLB and the MLBPA clearly did not go far enough with the discouragement of tanking. Maybe it will improve next year when draft picks will be impacted. For this year, the bottom-feeder teams didn’t care to spend. The CBA needed to set a minimum spending limit in my opinion while also making it that teams like the Dodgers and Mets cannot spend $175 million more than the average team.

The expanded playoffs keep more fans interested through the stretch run instead of giving up in July, but the tanking teams have already lost their fans before the season has even started.

The NFL preaches parity in their league that has hard caps, and generally it works to keep the fans interested in their teams. While the Braves bucked the trend last year for World Series winners being in the top 20 percent of spenders, the Royals shocked the baseball world when they won it all seven years ago as a small market team. So yes, it can be done, but mostly the big market teams have a chance to buy postseason berths, and at least get into the dance for the chance to win it all.

The point of this all is that the fans deserve better. Soon, MLB might eliminate the shiftiest of the shifts on defense. They want higher scoring games at the expense of rewarding hitters who hit into predictable patterns. Keep in mind, they tried to shift on Ted Williams when he played. Extreme shifts are based on the analytics in the sport that have placed defenders at points on the field where the path of the ball is supposed to go. The great batters like Juan Soto are still hitting over .300 because they are that good. Go ahead baseball, reward the imperfect players.

Baseball might try pitch clocks that limit the time between pitches, and while that is great, if they really want to save time, get Robo Ump ™ up and running, sooner than later. A three hour game that starts on time is what I want and expect. Less sitting around between pitches is great, and a fair system that all batters use with the robotic umpire will reduce any calls for foul play, especially with gambling so much of a part of the game now.

Today’s announcement from MLB is that umpires will talk to the crowd about what they are reviewing when video replay is used.

This season Major League Umpires will conduct in-park announcements during the Replay Review process. We’re pleased to launch this enhancement to the ballpark and broadcast experiences. Training has been held in Arizona and Florida this spring. pic.twitter.com/vQvMXXPMjw

What ideas do you have to make the game better?