Point-CounterPoint: How Bad Was the Nationals Bullpen 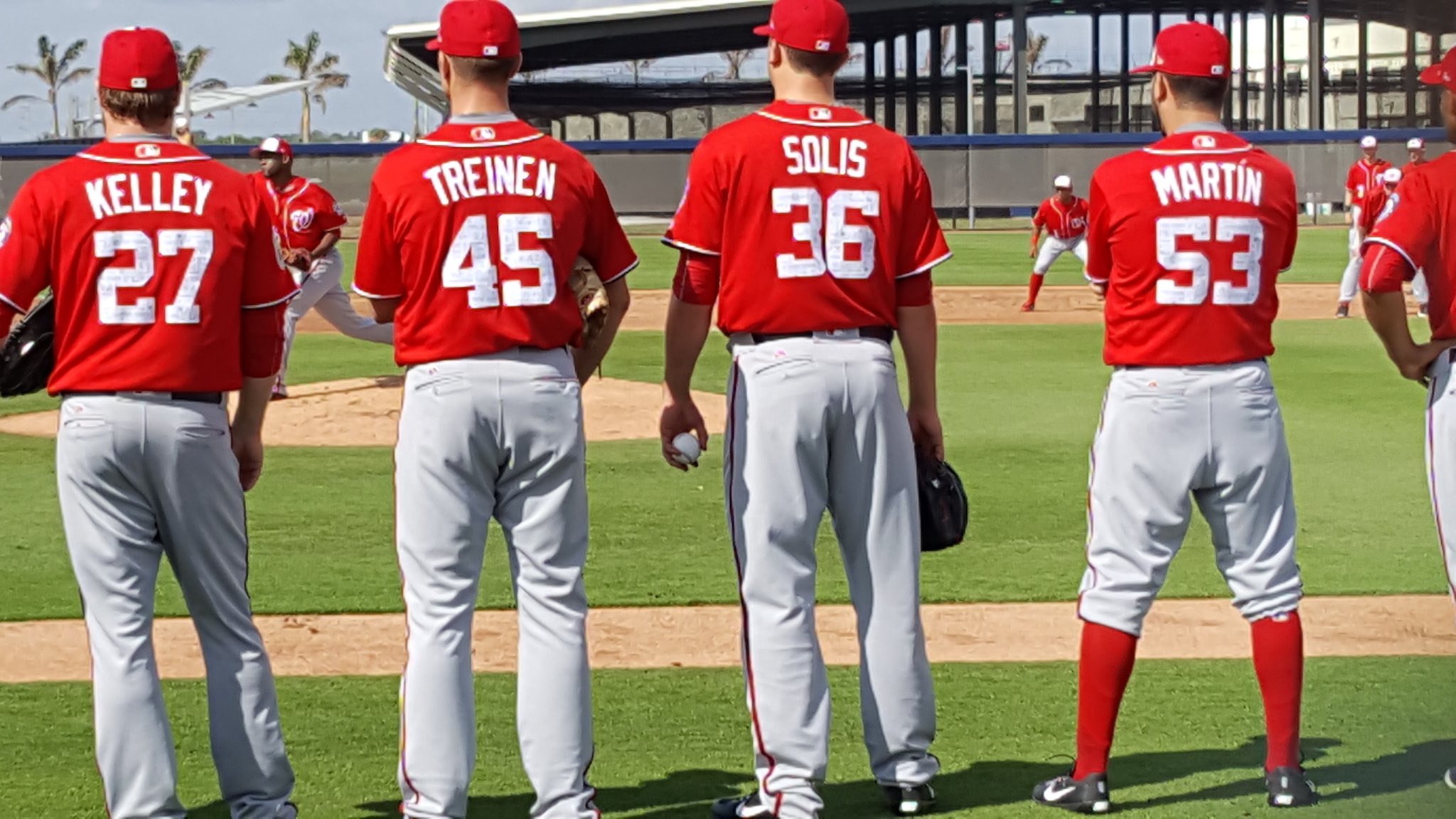 How times have changed in the bullpen; Stan4Nats for TalkNats

It is the off-season, so time to bring back our Point-CounterPoint series. Today we cover the Washington Nationals’ bullpen that set a record in ineptitude in 2021 for most blown saves in a season (36), and their 5.08 ERA was the worst in the NL.

Steve: First off, is the name of the ‘bullpen’ officially changing to the ‘arm barn‘? I guess not. We know the bullpen was historically awful in 2021; just how bad was it if we peel away the layers of the onion and look deeper?

Don: I was trying to remember what someone had suggested that the BullPen be renamed the Arm Barn. It went absolutely nowhere and so I remembered there was a suggestion, but not the details. It obviously got no traction!

Now back to the topic at hand, one doesn’t need to look at the data to say they were pretty bad. But sometimes looking at the data can provide insights.

I used the MLB GameDay data for this analysis but only included the games since August 1st. The motivation for that is to evaluate the team going into 2022 before any additions or subtractions.

This first table summarizes what the status of the game was after each inning starting with the fifth inning.

A few notes to help you understand the data in the table:

Steve: Wow, those numbers are even worse than I could have imagined. How do the Nationals compare to the other 29 teams in the league?

And can you collapse the Up and Down columns into just one for each. I appreciate the additional detail, but I’d like to see it based on Ahead, Behind or tied.

Don: Sure. This is how the Nationals winning percentage compares to the rest of the teams. They are downright awful. For example, they were the worst in all of MLB when up by 2 after the 8th inning; and when tied, they were either tied for last place after the 5th and the 7th innings and only better than two other teams after the 6th and the 8th.

Per your request, the following table just collapses all the Down By and Up By columns into single Down and Up columns. 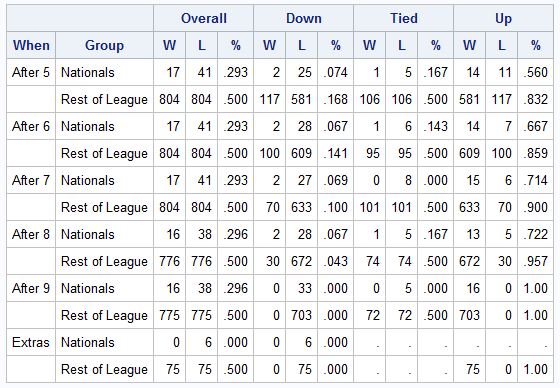 Steve: First off Don, this is just great research. I knew they were bad. But this is worse than I imagined.

So one immediate question that comes to mind is what would the results have been if the Nationals simply had a league average Bullpen.

Don: Ditto. I can do that. For example, consider the 11 games that Nationals were down by just 1 run in the 5th inning. Instead of a winning percentage of .091, suppose it was .294 – the average for the rest of the league. The following table does those calculations across the board. (Note an extra decimal for wins and losses and the % is a bit off due to rounding to 1 decimal point).

Lo and behold, with a league average bullpen, and the game status as of the end of the 5th inning, the Nationals are a .500 team (admittedly, lots of assuming here). But it does suggest that fixing the bullpen will go a long way towards improving the Nationals to be more competitive.

Part of the problem was the team losing Will Harris early on and the struggles of Brad Hand. Some relievers seemingly got overused — but also used in spots they weren’t ready for in the late innings. After Daniel Hudson was traded, it was even worse. General manager Mike Rizzo’s job is to fix it. Can he?

“I’d love to run a guy out there in the ninth inning where you know that when he comes in, the game is over. I think that’s the goal of every team,” Rizzo said. “But I think that the bullpen as a whole is more important than one specific person to pitch one specific inning. … It’s always part of the puzzle that you have to put together, and often-times it’s the most difficult.”

Don: That is a great quote from Rizzo. And it leads me to say that as a data analysts, looking at aggregate statistics can only do so much in helping one understand what the data is trying to tell you. A key point is to look at the aggregate statistics to decide what to research further.

Steve: Wow. That is a great point. So what do we do next? There is also the issue of how to evaluate the impact of runs scored vs. allowed in late innings. If the Nats are ahead by 1, expecting a shutout from the bullpen doesn’t cut it; you have to try to have some add-on runs for  some insurance.

Don: You are leading me right to the next thing I wanted to look at. What these aggregates are telling me is that the splits and perhaps the detail most likely to lead to insights is for the After 5 row (which using the league average guesstimates resulted in a .500 team).

This table shows the average number of runs scored after the 5th inning. I decided to calculate both the Mean and Median since, when you have limited data, the Mean is much more sensitive to extreme values.

From this perspective, it seems pretty clear that the problem is not a lack of scoring.

Steve: You really drilled down to so many key data points. It would be interesting to see that chart broken down by the score at the time.

Don: So I decided to break this down differently – by the status as of the end of the fifth inning. The above tables suggest that the the Down By 1, Tied, and all three Up columns – but especially the Up By 1 column for the After 5 row are the most obvious ones to look at. 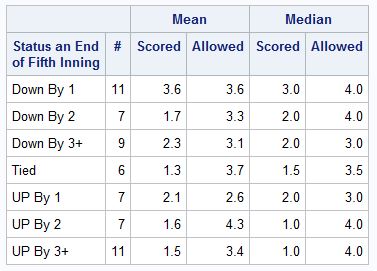 In all of those cases, it seems pretty clear again that the issue is not a lack of late offense.

I could drill down to individual games, but not sure at this point what that would add. I think a better plan is to crowd-source for ideas of what else to look at. I’m sure the TalkNats comments will have lots of opinions.

Steve: that chart showing what happened with the lead and how the add-on runs were never enough just turned possibly 25 wins into losses.

Don: My upshot of this is that, as you commented above about blows my mind, implies that perhaps just fixing the bullpen gets this team closer to being a .500 team. So clearly that needs to be Rizzo’s number one priority. That is the insight I got by looking at the details of how bad was the Bull Pen.

Steve: On quick fix problems, the bullpen no doubt is at the top of the pile of problems. The issue is there are few closers on the market and while my personal pick was Raisel Iglesias, he now is collared with a Q.O. tag, and no longer a fit for the Nats. Rizzo has a tall order here. It isn’t even about throwing money at the issue, it is about finding the right fits. Maybe Mark Melancon would bring the type of leadership needed. I just don’t know how much mileage he has remaining on his arm.

You’ve done such a great job at showing how bad the bullpen was collectively as it was just about everyone who failed when you go through the names.

Who knew that Hernan Perez was going to be the Nats best reliever of 2021 🤣. Obviously Daniel Hudson was the best of the bullpen arms in 2021. It would be difficult to pick a second best as Kyle Finnegan and Andres Machado would not even rank high in a good bullpen. Finnegan’s W/L record was 5-9. Who would you trust in 2022? I’m sure Tanner Rainey will be part of the plan because he finished strong, but his season was really bad. Tough decisions to be made.

Don: Lots to ponder. I have to say however, that the problems with the Bullpen are about a lot more than who the closer is. I agree that the QO rules out Iglesias. Not a fan of signing Melancon either.

Steve: The other chart I wanted to show was how bad the bullpens got under Dave Martinez’s tenure as manager:

For comparison, in 2016, the Nats bullpen was the 2nd best in the NL at a 3.37 ERA and just 0.02 from being the best bullpen in terms of ERA, and they had 15 blown saves which was the best in the NL. Even though you would never know it based on Dusty Baker’s use and usage of that best bullpen when it came time for the postseason, the record stands on what that bullpen did in the regular season and not the small sample sizes of the postseason that year.

The statistics tell a good story for that regular season in 2016.  They went from one of the best to the worst under Martinez from 2018 to 2019 in the regular season. The crazy part is the 2018 team did not even make the postseason, and Martinez took that 2019 team and that poor bullpen all the way to a World Series parade. The change as we know was getting Daniel Hudson and using starting pitchers as relievers in the postseason — a luxury you really do not have in the regular season.

Don: Blown saves is just one metric, albeit an important one. I purposely tried to look deeper and that is what led me to conclude that the problems began as soon as any reliever was brought in. Maybe I need to repeat some of this analysis  on the 2019 season. Both 2019 and 2021 the Nationals had too many blown saves – the question is whether the problem was the late inning guys versus everyone?

This entry was posted in Analysis, Bullpen, Point-CounterPoint. Bookmark the permalink.
← Previous Article | Next Article →