The money, the Juan Soto contract status, and roster moves! 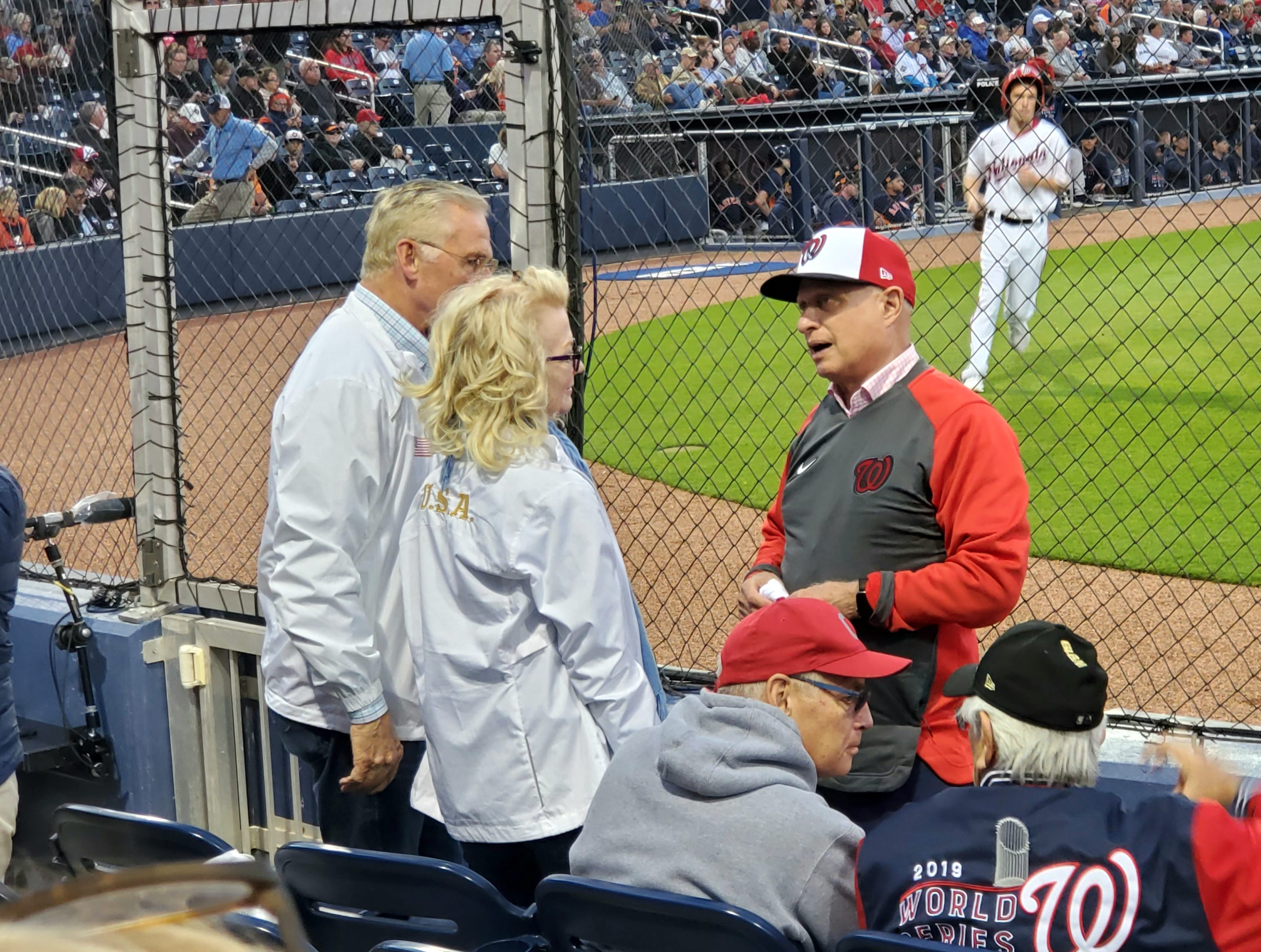 They say when a team is bad you cannot fire all of the players, and while that is true, the Washington Nationals will remove several players off of the roster by the time the team finishes Spring Training. The team does not have many free agents, so most of the change will come from 40-man DFAs and possibly a non-tender or two.

We will touch on some of the names who will be at risk of losing their jobs. Surprisingly, there are no swirling rumors that there will be changes in the coaching staff. That might come as a surprise for a team with the worst bullpen in baseball history when judged by blown saves and losses which both set records in their failures. And while some thought that pitching coach, Jim Hickey, should be fired, he actually got a vote of confidence from his boss: Dave Martinez. This Washington Nationals team lost more games this year than any year dating back to 2009.

The biggest complication is we do not know when and what the new collective bargaining agreement will say. The CBA is currently set to expire after the World Series.

Moves for the next 30-days

The first official roster move of the off-season was done yesterday when Alcides Escobar was signed to a 1-year deal. The next moves 30 days from now could be to add-back players who are currently on the 60-day IL with Stephen Strasburg and Will Harris added back to the roster. Most likely Luis Avilan will be released, and Joe Ross could be non-tendered due to his UCL injury. The other 60-day IL decision involves Kyle McGowin and his issue is that he is out of options. He could stay on the roster and compete for a spot in Spring Training. These moves are due five days after the end of the World Series.

The list was complied by Sao Magnifico on Rule-5 candidates not on our 40-man roster — Alex Dunlap, Donovan Casey, Jake Noll, Cody Wilson, Andrew Lee, Carson Teel, Joan Báez, K.J. Harrison, Cole Freeman, Omar Meregildo, Gage Canning, Jacob Rhinesmith, Tim Cate, Reid Schaller, Jackson Tetreault, Alex Troop, Israel Pineda, Justin Connell, Ricardo Méndez, Evan Lee, Jordy Barley, José Ferrer. This isn’t even a comprehensive list, and it’s still very difficult to see most of these players getting a 40-man roster spot this offseason. As Sao pondered, Casey, who is headed to the Arizona Fall League as one of the seven player chosen to go, seems the most likely to be protected from the Rule-5 and I agree. And Pineda and Noll could be the other players I foresee to be protected. This could expose Tim Cate who was at one time a top-prospect. You just cannot add everyone, and you just hope they aren’t poached by other teams.  These decisions will come in mid-November.

Also compiled from Sao, arb-eligible players on our 40-man roster — Josh Bell, Juan Soto, Erick Fedde, Tanner Rainey, and Wander Suero, and I will add Joe Ross to this list. As Sao noted, Fedde and Suero are candidates to be non-tendered after ineffectual 2021 seasons. Fedde is out of options, and Suero finished the year languishing at Triple-A. Take your pick which is worse. This could potentially free up one or two roster spots on or before December 2, although putting off a decision to that date would be too late to open spots for the Rule-5 eligibles.

There are a few players who are out of options like former first round pick Erick Fedde, pitchers Sean Nolin, Kyle McGowin, Patrick Murphy, Austin Voth and outfielder Andrew Stevenson. It is hard to see that all of these players will make the roster. It is possible that none of them will make it. Nolin might have had the best season of all of those players while all of the others had glimpses of good play.

The bottom-30 WAR rankings from Fangraphs

If your name is on this list, you should be very concerned about your future employment with the Washington Nationals. Now there is some rationale for a player like Josh Rogers to make a case that his WAR ranking of -0.1 is not a good representation of his value. But most are very fair and in the case of Sam Clay, the numbers are too kind. Also, many of these players like Jakson Reetz are off the 40-man and players like Jonathan Lucroy who were DFA’d already. 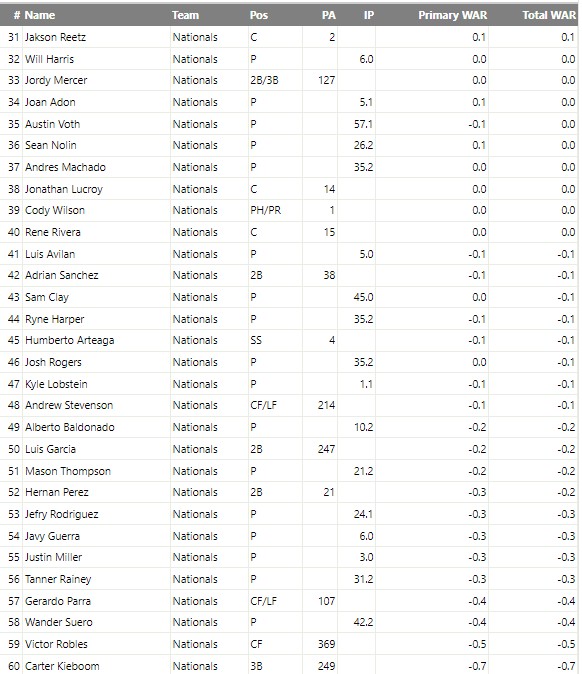 Other players “on the bubble” of the 40-man roster

The most obvious players on the bubble are Carter Kieboom who was the team’s worst player per Fangraphs, and barely ahead of him on that list is Victor Robles. While neither are in risk of being DFA’d, they are in risk of starting the 2022 season in Triple-A or being traded.

There are many assumptions here given the new CBA. We have tried to be conservative setting a new minimum salary of $750,000. If we had to guess what level the Nats will spend to, we think $185 million is going to be near the 2022 target. The one wild card in that is if Juan Soto is signed to a long-term extension then management would most likely spend much more than $185 million. We will discuss Soto below.

“I think if you see the right moves that are going to sustain you through the rebuild and the championship years — I think that makes sense,” Rizzo said over the weekend. “I think some really good one-year deals make sense. We implemented that last winter, and we signed a couple of really fine one-year contracts to some players.

“I think we’re going to be open-minded about both of them and I think that this off-season is going to be exciting for us. We’re looking at putting together a roster in a different way this year, so I’m excited about the challenge, and I think the coaching staff is also.” 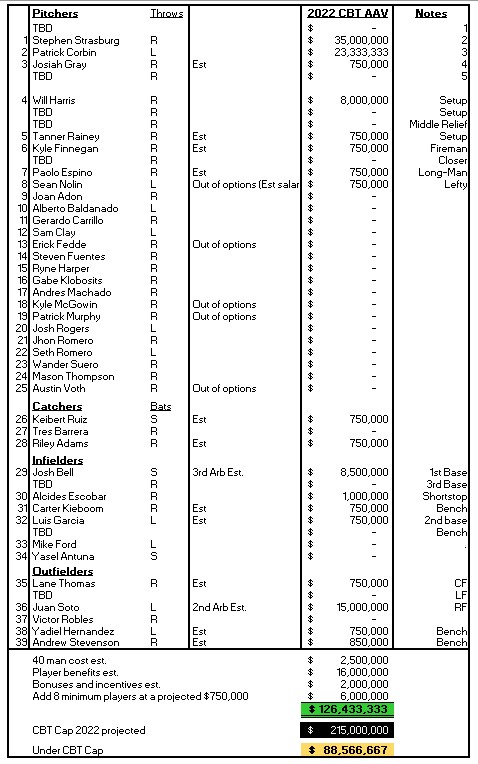 This is where the most disagreement and angst will take place when we discuss what Soto is worth. You have several position player contracts to use for comparison like Nolan Arenado, Giancarlo Stanton, Manny Machado, Bryce Harper, Fernando Tatis, Mookie Betts and Mike Trout. While some want to offer up $500 million to Soto, that probably will not happen, at least not in guaranteed money. The Nats control the next three years of Soto’s employment. They could do nothing and allow him to go to free agency after Soto turns 25 years old. If he is healthy and viable then, he could easily get a 12-year contract at a very large number.

My feeling is that long-term contracts rarely work out for the team. Albert Pujols and Miguel Cabrera‘s contracts give you reason for pause. They were the two best players of the previous decade and their contracts didn’t finish well. Harper’s contract is looking good so far, but who else looks good on that list? Even Trout’s deal, the largest in baseball history doesn’t look too good right now. A Harper type of contract for Soto would look like a bargain and so does Tatis’ deal. We all know Soto’s agent, Scott Boras, would like to break Trout’s contract of $426.5 million which covers 12 years. That is $35.5 million a year.

All of this factors into the “butts in the seats” revenue generation numbers. Soto’s real value is what he does on the field. His winning is what puts butts in the seats. What is that worth? It is very subjective which will lead to opinions. As we know, few will agree because the numbers have been debated before for departed Nationals players. Some will come up with a whole lot of numbers and the “pay the man” comments. Baseball is a business. It has to make sense, and the chances are probably slim and none that a long-term contract happens. It is never going to just be “pay the man”.

This entry was posted in Analysis, DaveMartinez, Lerners, MikeRizzo. Bookmark the permalink.
← Previous Article | Next Article →