One priority checked off the list as Alcides Escobar is locked up! 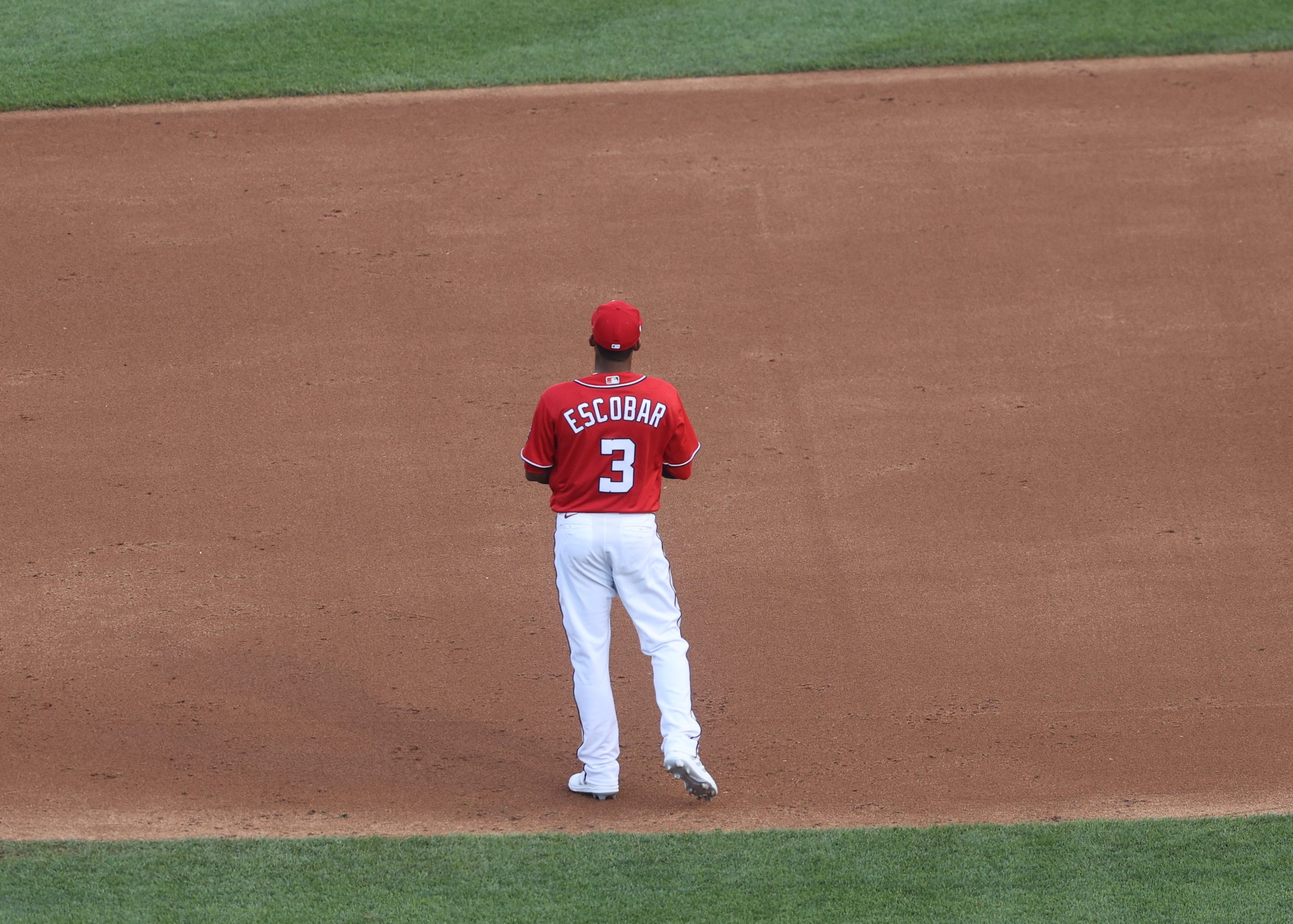 Priority #5, Alcides Escobar, is now under contract for the 2022 season, and we can check that off the list. Priority #5 also calls on general manager Mike Rizzo to upgrade third base. Rizzo has already said that Luis Garcia will go into Spring Training as his second baseman which is his job to keep. With Escobar at shortstop and Josh Bell returning at first base, and Garcia at second base, the fit is there once again for Josh Harrison, and the team could also take a look at Matt Duffy and the lefty Brad Miller as a I suggested in the original article.

Alcides Escobar arrived on July 3rd for the #Nats. He played for exactly 3 months and finished as #Nats 4th most valuable player at a @Fangraphs +1.7 WAR. If you extrapolate that to 625 PAs, he would’ve been a +3.1 player which is mind-blowing how good his overall 1/2 season was. pic.twitter.com/s5m4uj75qC

Last September, the Washington Nationals were eliminated from the postseason early, and we set our 2021 top-10 priorities which were actually quite telling if they were all done. Trea Turner was never extended, and the pitching rotation was never really upgraded even though the team added Jon Lester late in the off-season.

Many moves were made on last year’s priority list like extending Dave Martinez as the manager, extending Josh Harrison, and even trading for Josh Bell who not only solidified the first base spot, but also the spot after Juan Soto in the batting order, and it did allow the team to get Kyle Schwarber. Overall, the team had a great run in June and was actually in first place to open the month and then they fell apart almost simultaneously when Turner hurt his hand on a slide while going for a cycle, and Schwarber pulled his hammy and was lost for the remainder of his tenure with the team as he was traded while on the IL. The team went from two games above .500 to the cellar of the NL East and wisely sold-off at the trade deadline.

The bullpen was supposed to be a strength for the 2022 Nats after general manager Mike Rizzo spent big for Brad Hand to go with Daniel Hudson and Will Harris at the back of the bullpen with Kyle Finnegan and Tanner Rainey in the middle. But Rizzo never got a competent lefty for the front of the bullpen and instead rolled the dice on Sam Clay and crapped out. Of course Harris was injured, Rainey ineffective for most of the season, and Hand blew 5 saves in his time with the Nats. The only competent arm was Hudson. Overall, the bullpen’s 5.04 ERA doesn’t tell the full story because it doesn’t account for all of the inherited runners they have allowed to score. Their 1.429 WHIP gives you an idea that there were few clean innings when a reliever was called into a game this year.

Maybe the craziest stat ever is the offense has been better since the trade deadline at 4.70 runs per game than before at 4.38. The new offense hasn’t provided many blowout games or many low scoring games. They only had 1 game above 9 runs scored and four games of scoring 1 or fewer runs compared to the pre-trade deadline offense that was feast or famine. How is that possible when you trade Turner, Schwarber, Harrison, and Yan Gomes? It kind of starts that Soto really clicked in after the All-Star break, Bell had a long hot streak in the second-half, and several other players stepped up including some of the newly acquired players via trades.

But let’s not get too carried away here with the improved offense, it sure didn’t translate into wins. The team was 48-55 at the trade deadline and since then has gone 17-39 — yes, that is a .303 winning percentage. Keep up that pace for a whole season and you lose 111 games. The pitching has been so bad that they have lost 20-games in which they scored 5 or more runs since the trade deadline. That is mind-boggling and a complete reversal from traditional Nats baseball. As of this writing, the team in 2021 also has a record 35 blown saves. This would be a winning team if they had a great bullpen and probably in the playoffs. If if if.

So what is broken? Clearly the bullpen, the front of the starting rotation, and third base. There are spots to shore up and improve.

Priority #1: Get Juan Soto extended on a long-term contract. Easier said than done and unless general manager Mike Rizzo and the Lerner ownership group are willing to commit to 15 years and a half-billion dollars for Soto, this probably won’t happen. There won’t be a Ronald Acuña bargain deal. Scott Boras is the agent for Soto so no deal unless this is record breaking money which would start at Mike Trout money of $426.5 million. Odds on anything getting done is probably 10%, so enjoy the next three years.

Priority #2: We wrote about this months ago and for years that the poor development of prospects and the way the team drafts would catch up with them and it has to now everyone is clamoring for an overhaul of the developmental system. The easy fix is to hire someone who has done it in the chain of Andrew Friedman. This is about finding someone who has done it. Tampa and Friedman did it right and he took that to Los Angeles and people under him have been promoted to other levels. You have to embrace it. Saying you love analytics doesn’t mean much. Put it in action.

Priority #3: Fix the bullpen. Do you keep Rainey, Finnegan and hope Will Harris has fully recovered from his thoracic outlet surgery? The team will give their many arms on the 40-man roster a shot at making the team, but expect at least three free agent arms to be signed in the off-season including a closer.

Priority #4: Sign a front of the rotation starting pitcher. Easier said than done as this will cost a lot of money but because there is much unknown about Stephen Strasburg who won’t even start throwing until November after his thoracic outlet surgery and the issues with Patrick Corbin, the team really needs a “sure thing” near the top of the rotation. You have to think that Marcus Stroman would be a solid fit for this team. A reunion with Max Scherzer is doubtful, but there are so many other names.

✅ Priority #5: He would certainly bridge the gap to the youth in the minors like Armando Cruz who is still two to three years away if it happens.

I’ve seen all I need to see with Carter Kieboom to know that he is either going to be a late bloomer or a bust. His defense is horrible and he is the lowest rated defender if you extrapolate for a full season using Statcast’s OAA which is a minus-13 outs above average. Add to that the .214 batting average and his Fangraphs -0.4 WAR for the one-third of the season he has actually played and you have an easy upgrade. The team could try to re-acquire Josh Harrison or even get Matt Duffy who is a half-time player and has put up a +1.1 WAR. The issue with both is that you would want a lefty to platoon so how’s about Brad Miller. That’s why Josh Harrison makes more sense as he can play more than one position. Get Miller and Harrison. Easily this could be a +2.0 WAR swing here without breaking the bank.

Priority #6: This might not be the popular decision based on results but I would stick with pitching coach Jim Hickey for at least another year, and I would try to tie-up hitting coach  Kevin Long  long-term.

Priority #8: Spend money. In the short-term, the only way to fix this sooner than later is to spend. By our count based on the current CBA formula, the Nats 2022 payroll is at $128 million with projected arb-eligible salaries. Spend to $185 million in total, and give Rizzo $57 million to spend this winter.

Priority #9: If you have the money, try to sign the right-handed outfielder Adam Duvall who can play any outfield position as well as DH. That allows you to play Yadiel Hernandez in leftfield and DH. It also lengthens the bench if Ryan Zimmerman does not return for 2022.

With a good bullpen that is an 81 win team kind of like the 2011 Nats who went 80-81 that season. They did that with a starting rotation of Jordan Zimmermann, John Lannan, 36-year-old Liván Hernández, Jason Marquis, and only 11 games from Chien-Ming Wang and 5 from Strasburg. It is possible.