What to expect for a potential Max Scherzer Trade 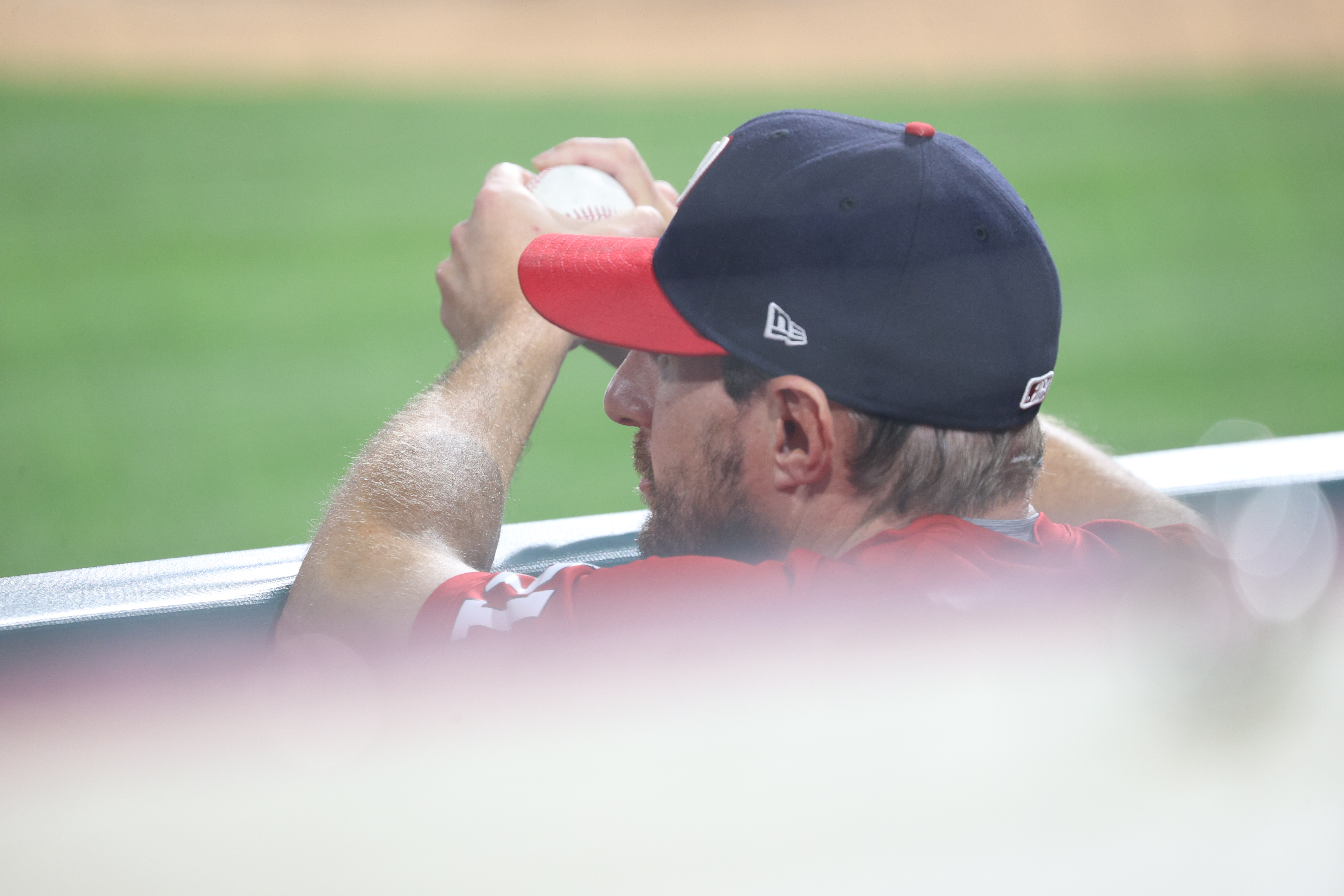 The 2021 season has, in the past few weeks following the All Star Break, soured for the Nationals. The past week has been the biggest indication for the front office that this current roster is incapable of making a run. For the first time in his tenure as general manager, Mike Rizzo is preparing to sell off pieces at the Trade Deadline, one of which is Max Scherzer. Remember, Rizzo sold-off in 2018, but did so after the trade deadline. The Nationals’ ace is one of the biggest names on the trade block this year. He is in his contract year, and the Nationals owe it to him to give him another chance to win a World Series if Scherzer wants to waive his no-trade rights. Of course even if Scherzer goes to another team, the door could still open for him to re-sign in the offseason with the Nats.

There are some very compelling scenarios for Rizzo to score some top prospects, and all packages will be hinged to how many dollars the Nationals will eat for the current season, and if the package includes more than Scherzer such as Daniel Hudson and Brad Hand. The Nats could also look at larger deals to include Trea Turner, Kyle Schwarber, Yan Gomes, and Josh Harrison too. Turner, who is under team control through 2022, would require a haul back just by himself.

The NL West teams where it is rumored that Scherzer would like to go is loaded with top prospects.  Would Rizzo go for quantity or the quality of headliners in a trade? You would hope that it is the latter where Rizzo could score a team’s top prospect in a trade.

Some trade partners and scenarios include:

This package is one that probably makes the most sense for both clubs depending on the Nats desire to go after Josiah Gray who just made his debut for the Dodgers or if they pivot to Keibert Ruiz who has been their top-prospect at catcher. It is very rare for a team to give up a player on such an expensive contract without sweetening the deal with a little bit of money going the other way. If the Nats do not want to pay for part of Scherzer’s contract, odds are that the Dodgers are reluctant to part with a prospect like Beeter.

As for the haul coming back to DC, it is a very strong one. Gray is a very polished pitching prospect from the Dodgers’ system. They are one of the best farm systems in terms of developing pitchers. Gray recently made his MLB debut this past week, going eight innings over two appearances, one start. A major league comparison is Marcus Stroman with more physicality. Like Stroman, he was a position player in high school, but transitioned to the mound. His fastball is in the 92-97 MPH range and pairs it with two sharp breaking pitches.

Hoese is one of the most polished hitters in the Dodgers’ system. He should be able to translate his prowess seamlessly. Many within the Dodgers’ organization compare him to a right handed Corey Seager with his pure hitting talent. As for Beeter, he is more of a project than the other two. He was only drafted back in 2020 and is currently in high A. He needs to work on his control. That being said, his raw stuff is very well received.

If the Nationals were able to pull this trade off, consider it an absolute steal. This package from the Giants can be viewed as a highway robbery for Mike Rizzo & Co. Any combination of Luciano and Ramos plus a pitcher like Corry should be enough to get the deal done although the Nats might covet catcher Joey Bart as a headliner and that might be more amenable to the Giants if they do not want to part with Luciano.

Although, if the Giants really want Scherzer, then potentially the Nats can add Brad Hand and even Daniel Hudson to expand the deal. The biggest thing working in the favor for the Nats is the fact that there are a number of suitors for Scherzer. The Nats can drive up the price tag on Scherzer due to that, forcing teams to overpay for him. Also , the addition of Hand in this deal means the Nats can ask for another prospect in return for a better package.

Luciano appears to be a bonafide stud at shortstop. The cream of the crop at his position in the Minors, it is easy to see what makes him special. He has plus power and speed. His defense needs a little refinement, but overall is solid for his age. A good comparison would be the bat of Javier Baez and the glove of Elvis Andrus. Heliot Ramos is another intriguing prospect that the Giants have in their system. He is less of a sure thing as Luciano, but still projects to be a solid player for years to come. His main draw is his balanced skillset. He is a master of none, but solid in all categories. Think of a player like Charlie Blackmon in his current state: middling contact, average, etc. However, Ramos has room to grow into a bigger impact type of guy.

Finally, Seth Corry is one of the more unheralded prospects in the Giants’ system that can really make an impact. While he is yet to play above high A ball, he is still a solid prospect. He does not blow guys away with velocity, but rather his breaking pitches are some of his biggest assets. Overall, think of a Gio Gonzalez type due to his control issues.

This might just be one of the best hauls the Nats can get for Scherzer, and expand the deal as the Padres have more needs than most given their injuries. The Padres have an extremely talented roster, but they also boast an amazing farm system, one that allows them to make big time trades due to their organizational depth. They have been talking about wanting to add a starting pitcher, and Scherzer is about as good as it gets. There is arguably no better place to be a pitcher than Petco Park. The weather is superb, and the dimensions are so pitcher friendly. For the Nats to make this deal go through, however, they probably have to give up Hudson in order to get the amount of high level prospects they so desperately desire.

Abrams is the big piece on the move here. His season prematurely ended due to an injury, but the upside is still there. He boasts speed that is an 80 on the 20-80 scale (80 is elite). His bat skills are also very highly touted and should be someone that could make an impact pretty quickly if traded to DC. Additionally, he is pretty much blocked at any infield position in San Diego with Fernando Tatis Jr. signing on with the club for the better part of the next decade.

Hassell is another player drafted recently in 2020. He looks like a Jake Croneworth type of hitter: lots of bat skills and will simply hit regardless of the situation. It is important to note that he has not moved to the higher level of the Minors yet, but is still seen as a player who can fly through a system and make an immediate impact. Finally, Lawson is another very good player. He is making a steady ascent after being drafted back in 2016. He is developing into a really good starting pitcher, though some projections see him in the bullpen long term.

Of course Rizzo might want Luis Campusano who is their top rated catching prospect in the package, and this is all part of the give and take in any negotiation and might require a restructuring of any deal.

Overall, this is the best haul the Nats could hope for if they were to choose from these options listed.

For all intents and purposes, the Nationals are most likely not going to trade Scherzer to the Red Sox. There are simply more lucrative deals that lie on the West Coast. In addition, Scherzer stated that he prefers to be dealt to a West Coast team. However, if they were going to trade him to a non-NL West team, the Red Sox would certainly be that team. The Red Sox do not boast the same type of farm system as the other teams on this list, but they still offer some pretty good players to dangle.

Casas looks like their best Minor League hitter. He is a player that can very easily slide into a Major League lineup and produce. He is not anything of a speedy guy, but is similar to a Daniel Murphy type of hitter. Duran is the opposite. He recently debuted for the Red Sox and has manned centerfield. He can fly, simply put. His bat skills will need refinement, but he looks similar to a Lorenzo Cain type of player when he finishes developing. Finally, Jay Groome is someone that Nats fans will love watching pitch. He is a very well rounded pitcher and one that can be put into the rotation as soon as 2022. Think of him like Trevor Rodgers in terms of the fact that he can really make an impact right away.

While the thought of dealing away the ace of the Nationals’ 2019 World Series team is tough for fans, it might be a good thing moving forward. The Nats’ farm system is relatively barren. They had a very good draft in 2021, but many of those players will not be close to ready until at least 2022-23. That means the Nats must use their current resources in order to be in contention in the coming years. Max Scherzer has been everything for the Nationals, and now, it is time for the Nationals to maximize that and make the most of the situation.