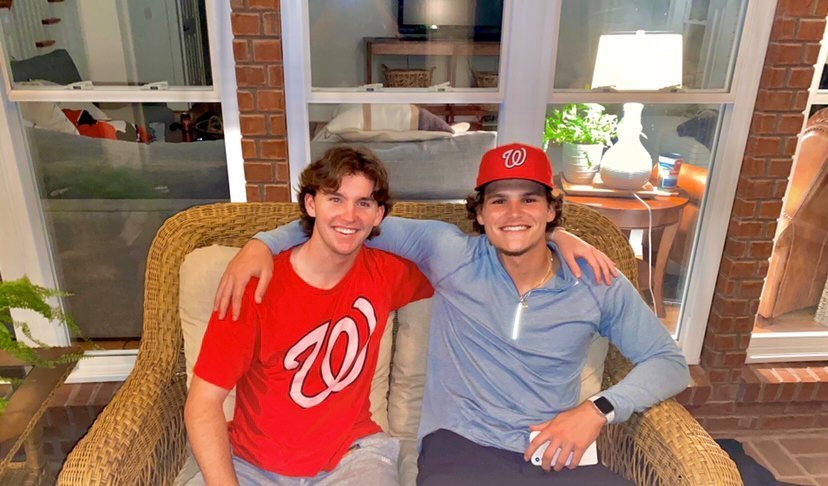 The 2021 draft is done! Now, we wait for the new draftees to sign their contracts then the slow cooking as the talents show first glimpses before the season winds down. Will any of the talents sign quickly enough to make an impact? Certainly. Will we know what we have before mid to late next year? Certainly not. Players who set themselves off for their tools and performance in 2021 will make it to the Instructional League camps this fall, where the heavy polishing begins, especially for the pitchers. Then, how they mature and transition into the pro game slowly begins to take shape, from months to years.

This is a heavier high school draft for the Nationals, and that has attracted a lot of buzz. Everyone has a theory as to why, and here’s mine: With the draft only twenty rounds, the team can get a lot of organizational arms, sleeper pitching talents, and lower minor league talent from the free agency ranks of who is available after round 20. Judging by Nationals’ drafts of recent years, and how may players have stayed in the system for several years from later rounds relative to earlier rounds, there is merit to the idea of flagging lottery tickets in the same way the Nationals use the international signings. Spend a lot on a few, spend a little on a lot, and let your scouting show its merit by flagging under the radar bargains. The Nationals heavily scouted THIS senior class, for the past three years (19-20-21) in fact because of COVID’s opportunity for kids to get another year of eligibility, and so I am curious to see who those post-draft senior free agents are who sign.

What the Nationals draft also has been is heavier on high school position players. That in particular is a huge aberration. To me, this heralds organizational appreciation that TJ is inevitable for too many young talents and therefore a less appealing organizational risk. Think about it – Jordan Zimmermann, Lucas Giolito, Mason Denaburg, the list goes on, and primarily (not exclusively) high school talent. So if a high school arm who wants to go pro is there for the taking, like a Michael Cuevas at 125K, that’s one thing. But to spend millions on a player who takes forever to see the mound? Those days may be gone, especially as the first round can net a healthy and accomplished college pitcher even at the mid-latter end of the round (Cavalli, Rutledge, Henry).

The Nationals’ system-wide power outage is impossible to ignore. The poor developmental progress of Nationals’ position players overall is impossible to ignore. The organization has aggressively promoted certain mature players whose on-field performance has underwhelmed. These opportunities may be a last gasp for those talents in the lower and upper minors before the next wave comes in.

What the top picks also reveal is that the Nationals have confidence in their top-end pitching. That there are enough high-end pitchers in the lower and mid minors that the organization could prioritize position player needs this year while the arms fruit ripen another year. That is a big statement and a big step forward from how we sized things up after the Eaton and Doolittle trades. And we have yet to appreciate a true yield from the Latin American haul of recent years.

Before we look at the specifics, keep this in mind. Rankings of prospects are altogether overrated. There are measurables, and there are non-measurables, which is why quality scouting is imperative. The only thing we can gather are general understandings of certain players – their builds, their speed, their power, their polish at this stage, their on-field performance, their off-field qualities. For example, the Gators marginalized Dane Dunning. The Nationals got him late in the first round. He is now in the major leagues. Tyler Dyson likewise had the SEC pedigree that the Nationals have long coveted and regularly drafted. But players have not necessarily delivered at their good schools or even received their opportunity. Andrew Lee did not pitch at Vandy. Reid Schaller did. Who has the higher ceiling now?

You can bet that rankings help manage signability, though. If drafting a high school player at 47 like Daylen Lile “ranked” 80 improves his overall signability as it relates to slot value, great! He’s still well-thought of as he is, and the Nationals have still scouted him as they have.

What’s the point I make? That one truly has to be realistic about over-reading what one cannot account for, but not over-read what is known (injuries, off-field mishaps and good and bad character). That’s a lot of what you will get below, and I hope you enjoy, as we all enjoy Nos Amours (what we all used to call the Expos).

1st round – Brady House – Whether he was ranked third best or eighth best, whether he projects to be Ryan Zimmerman or Joey Gallo or Kris Bryant is all just immaterial because it is unknown. So it matters not. What is known is that he has the most powerful bat in the high school class, coming to an organization in which power is limited to the pitching inventory. He doesn’t have to “develop” power — he has it and he has arm strength. He has succeeded on the field and has failed and has thereafter succeeded. So I am delighted with this pick with a capital D. The fact that he is a shortstop with a strong arm means that he can eventually slot into any one of six positions. What’s not to feel good about? The fact that he likes the Nationals and admires Trea Turner is a plus as well. The Nationals drafted him knowing what the budget expectations would be of an SEC commit, and it’s their money. He fits an organizational need immediately and is worth the investment.

2nd round – Daylen Lile – I am likewise delighted with this pick. Some perspective; look at the second-round picks of the Nationals in recent years. This is a player drafted to develop into a starting outfielder, whose floor is dictated by his power trajectory, but his ceiling is a starting major league, top flight hitting outfielder. His hitting approached is deemed to be advanced; he hits tough southpaws from the left side and has a wonderful batting eye. The Nationals, philosophically, have done well with Soto-like players who work a count and draw their walks. Lile has already shown power as a high schooler. He was a national high school player of the year, and coming out of a low exposure state like Kentucky. And in the Nationals, he comes into an organization utterly lacking in outfield talent that is producing anything exciting on the field. Lile in the second round is also the organizations’ way of acknowledging that Juan Soto is the Dominican exception, rather than the Jeremy De La Rosa rule. Compare Justin Connell and Ricardo Mendez, for example, and their costs and trajectory. Top high school talent has to be grown from diversified sources, including the American soil as well. Lile is part of that and worth the stretch to bring him aboard. Now we can see Lile and Daniel Marte in the same FCL outfield, and follow them in parallel as instructive of team building approaches.

3rd round – Branden Boissiere – A capable first baseman with an outstanding and ever-improving bat who likewise can manage both left and righthanders. What is not to like about a proven major college hitter with emerging power who can handle his position? He hit well in the playoffs, when it mattered – big time players make big time plays in big time games. Arizona fans note that the left field wall at their home park is farther than some major league fields, and the dry air does not exactly make for inflating home run totals. And exactly whom do the Nationals have to be excited about for 1B? Drew Mendoza, converted from 3B and unable to hit his namesake in AA? Mendoza, who despite the hype and Boras has not translated into power even in A+? Boissiere here shows a willingness to acknowledge that the Mendoza pick may not work out and if it does, well hey, competition is great and a necessity of successful sports franchises. I’m foolish enough to believe that the flash of Yadiel Hernandez’ early 2021 (as well as being in a contract year) lit a fire under Kyle Schwarber’s arse. Enter Boissiere, again “ranked” lower and therefore perhaps a more affordably signable sophomore that we can hopefully soon see at Fredericksburg. The Nationals have a need, though he is also in the transfer portal and rumored to transfer to LSU with two years of eligibility if he returns to school for a senior year.

4th round – Dustin Saenz – After three underclassmen who have options and negotiating power, the Nationals did it once again, dipping into the SEC for the ace of the A&M Aggies staff. This being the Nationals, once can always count on a longing for the next lefty starter hope. This is Saenz (as Skip Caray liked to say about Rudy – spelled differently), who had over 11 K’s per nine innings this year. He had been inconsistent at times, getting hit hard against SEC competition, but shut down LSU but good in his last outing. Saenz fields his position well and is known for his tough competitive nature. Best of all, he has already agreed to terms, with the Nationals waiting to sign in the context of ongoing negotiations and number crunching. No small matter, as he does have a year of eligibility remaining. Again, what is known: lefty, starter, has multiple pitches, only 23 career starts so lower mileage, major competition, high character pitcher.

5th round – T.J. White – Another high school position player, and again, a power bat. White is going to sign with the Nationals; so two and perhaps three teenage power high prospects come into the system. At a 300 plus K slot value, for an organization looking for plus power, such a get from the international market would have cost more and with greater risk (as 16 year olds’ power is hard to project). He has a pedigree of athleticism and dedication to the game, so the hope is that they can polish his defense enough to stay in the outfield. If not, and if he eventually winds up at first base as a power hitting switch hitter, that ain’t shabby either.

Five draft picks and not one is ticketed for being an extra player. The “knowns” of all five fit organizational needs. In an organization with under-performing position player offensive talent, and with a system wide power outage, the skills already there are badly needed. Would these folks have been acquired in a deadline deal, we’d be pretty happy. So the top-5 will work just fine once signed.

This entry was posted in Draft, Feature, Prospects, Roster. Bookmark the permalink.
← Previous Article | Next Article →