Game #4 of the season takes the Nats back to the scene of the rhyme! 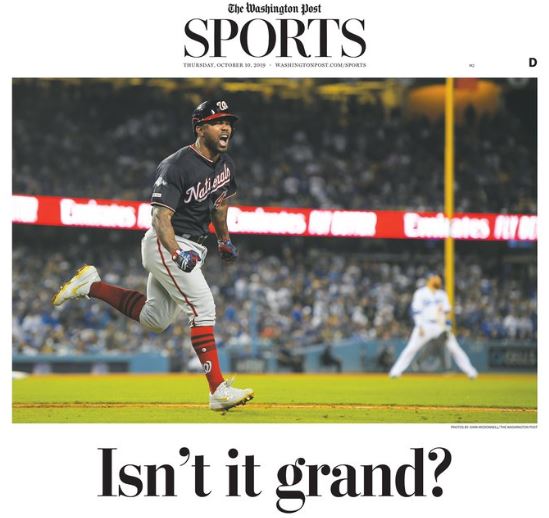 It was 544 days ago when the Washington Nationals were seen in Los Angeles. On that day, they were celebrating the Howie Kendrick grand slam to beat the Dodgers in the finale of the NLDS. It was the Howie Wowee. A defining moment for the franchise to progress past an NLDS and get off that schneid. Minutes earlier, the Dodgers thought they had a walk-off by Will Smith that Adam Eaton caught in front of the rightfield wall. The bounces finally went the Nats way.

This afternoon, the Nats will play the Dodgers and witness their team hoisting their 2020 World Series banner. It is their Opening Day. But winning a World Series in that COVID season of just 60-games was like winning a sprint. A regular baseball season is a marathon. The Dodgers didn’t even run a half-marathon. To many, the Nats still hold the crown. But there is no denying that the Dodgers have been the best team overall in the past four years. They deserve credit for their success and over the past 10 years, the Dodgers and Nats are the two best franchises in baseball.

It was 530 days since Joe Ross last pitched in a game which happened to be Game 5 of the World Series. After Ross opted-out of the entire 2020 season, he is hopefully returning with some new tricks up his sleeve. We have been waiting for a new-and-improved version year since his debut in 2015. We are hoping to see Ross pitching a mix of sinkers, sliders, curveballs, and changeups.

Facing Ross is the Dodgers’ ace, Walker Buehler who didn’t have a great debut with a fastball that averaged 94.7 mph and has him looking for answers. We will wait and see which Buehler we see today. The key for the Nats is to hit him early and often.

Perhaps the big news of the day is that the Nats got 4 players off of the COVID list and indeed will go with 3 catchers with Jonathan Lucroy starting today, and Yan Gomes and Alex Avila on the bench.

There are several other roster moves such as INF Jordy Mercer and LHP Brad Hand returning from the COVID IL. The players sent back to the alternate site are Carter Kieboom and Cody Wilson. In addition, catcher Tres Barrera and Ryne Harper are moved to the road “taxi” squad.

More news from @dougherty_jesse on returning players plus Patrick Corbin has not been activated yet but is working out with the team and will practice today. That leaves just Josh Harrison, Josh Bell, Kyle Schwarber, and Jon Lester as the unknowns right now on the IL. https://t.co/QXYtGkl1sV