WASHINGTON D.C. — Major League Baseball debuts for relief pitchers are generally spots made for low lev situations. That was not the spot you would expect to signal in a newbie to face the former Rookie of the Year, Ronald Acuna Jr., reigning MVP, Freddie Freeman, and two-time All-Star, Marcell Ozuna. But that is exactly what Washington Nationals’ manager Dave Martinez did when he handed the ball to Sam Clay in a one-run game. The 27-year-old lefty was only up with the team because of the decimated roster that was riddled with COVID-19 that required a total of 9 replacement players. Clay was officially called up on Opening Day, and now has the opportunity that dreams are made of.

The kid from Georgia grew up a fan of the Braves and had to focus at the task at-hand while putting aside any boyhood fan allegiances. The lefty knew that he would be facing the face of the Braves’ franchise who was third in their order. Clay did the unthinkable. He struck out Freeman on an 86.4 mph inside slider that caught him looking. Last year, Freeman had a 2.5:1 BB/K in 3-2 counts.

That strikeout was magical and gave the reliever enough confidence to then go after Ozuna. To start that at-bat, Clay dotted a perfect 93 mph sinker above Ozuna’s knees, and over the inside corner. But the newbie was bilked by homeplate ump Lance Barrett who called it a ball. It didn’t matter as Clay kept his composure and stuck with his plan. Veteran catcher, Jonathan Lucroy, was on the same page to get Ozuna on chase pitches below the zone. Clay threw Ozuna a low sinker for a swing and miss, and then a slider below the knees, that looked like another fastball. Clay induced a filthy swing and miss to end the inning with his second strikeout, and put a much needed zero up on the board.

To think, Clay was just 13 years old when the Braves drafted Freeman, and he sat many times in old Turner Field cheering on those Atlanta teams of yesteryear. If all goes well, Clay will get to face Freeman many more times in the future. 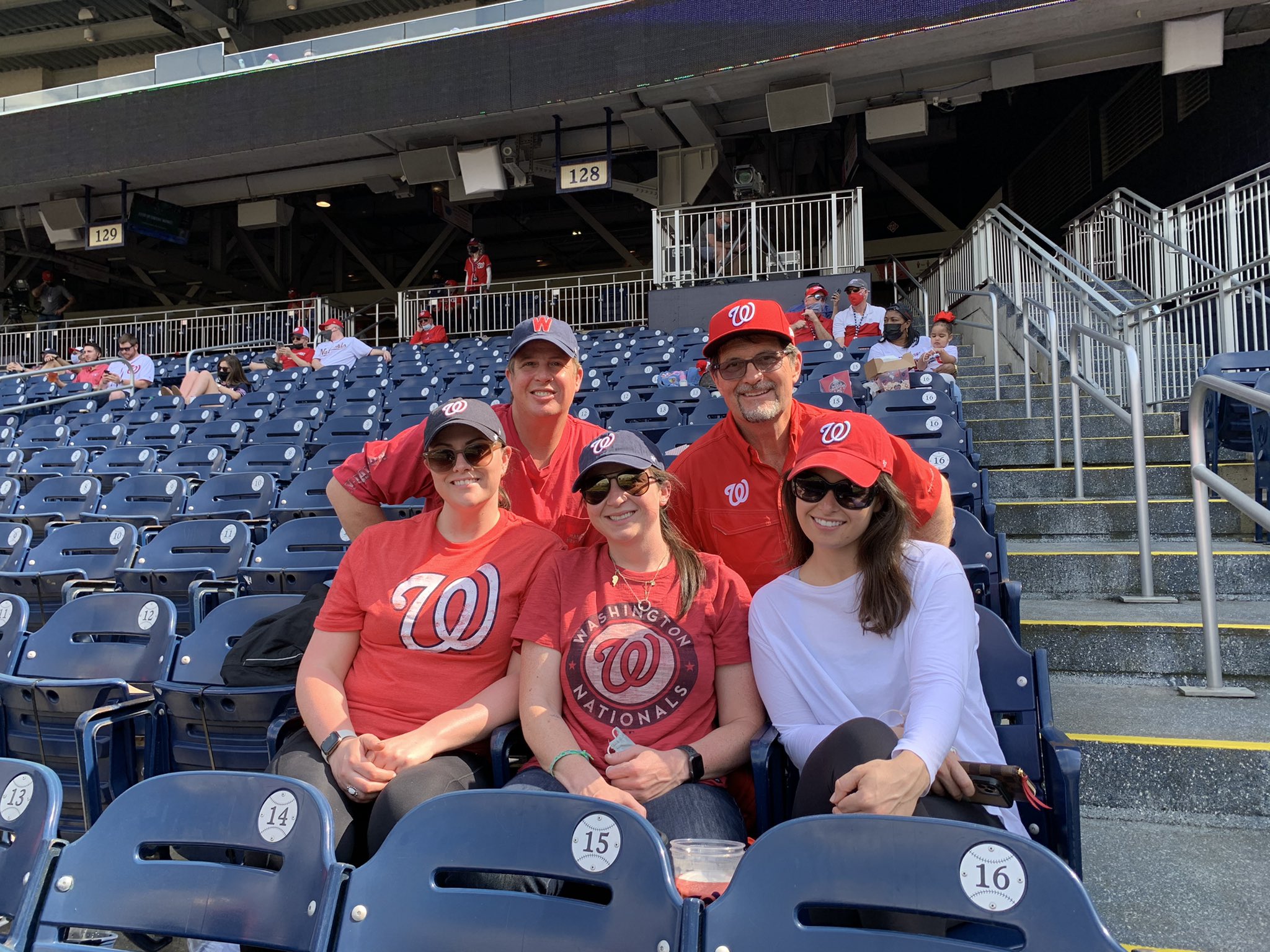 All smiles after Sam Clay’s debut

In all, Clay took care of all 3-outs himself with a grounder back to the mound that he fielded for one of his patented groundouts plus the two strikeouts. It gave Clay a +0.1 WAR per FanGraphs on the day. He exited the mound to a great round of applause from his dad, Darby Clay, girlfriend Jordan Smith, sister Justine Clay, brother Cody Taylor, and family friend Emily Cheek who were all in attendance (pictured above).

“Made all the outs himself,” Cody told us. “Pretty nerve-wracking for us.”

Yes, the families are probably more nervous than the player. They all traveled from Georgia to D.C. without a guarantee that Sam would ever enter one of the games. They  had to go through their own COVID testing and intake procedures if they wanted to get close to each other. The other necessity was buying Nats gear. They’ve been living in Georgia for over 20 years before the Nats existed, and Clay has converted them all from Braves fans to Nats fans.

“I grew up a Braves fan,” Clay said. “It was a little crazy just because you see these guys on TV, and then you’re standing up on the mound and you see them standing there, and they just look like giants.”

The Georgia Tech alum lives miles from Truist Park. He grew up in Buford, Georgia and works in the off-season for his brother Cody at Heirloom BBQ in Atlanta. Sam does food deliveries for Heirloom where you would expect most customers are Braves fans in one of those strange twists of irony.

With the debut in the books, Clay will always have that moment of striking out Freeman. The team kept that K baseball and presented it to Clay after the game. That will be a constant reminder sitting on his trophy shelf of this special day.

“It felt pretty good to get the first strikeout, especially against such a great hitter like Freddie,” Clay said.

With that strikeout, Clay became the first Nats’ pitcher in an MLB debut to strikeout a reigning MVP since John Lannan first accomplished that rare feat on July 26, 2007 against the Phillies’ Ryan Howard, but Lannan did that as a starter in a game where the Nats were deeply in last place and the implications were just to get the Nats in a good draft position the following year. This game was on the line at the time. Clay, by the new rules, had to face the minimum three batters and go up against Freeman.

While this day seemed like the perfect day, it was bittersweet. Clay’s mother could not be with the family. She passed away in 2018 after fighting cancer. In Sam’s heart, Belinda Clay was certainly a guiding light on this day.

“Only thing that could’ve made it a better day for my son would’ve been to have his mom here. She passed away to cancer on November 5, 2018. She was his biggest fan!,” Darby Clay told us. 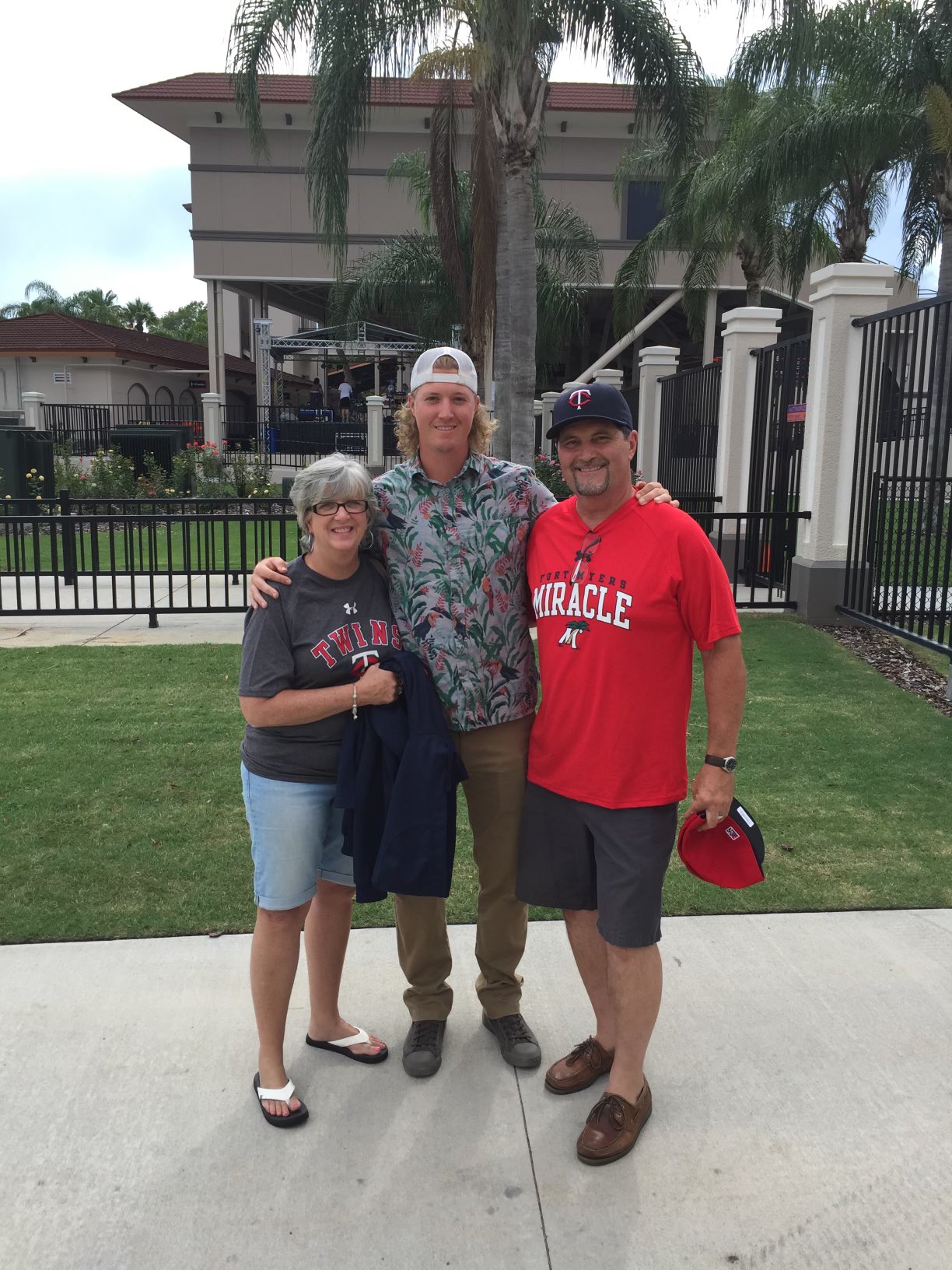 In 2014 when Clay was drafted by the Twins, he was a 4th round draft pick and a standout in their Minor League system for seven long years. But he never got the call even during seasons when many expected he would get his chance, but it never came, and Clay’s mom never got to see him pitch in a Major League game. That was certainly one regret.

A key word often overused in sports is when they say “opportunity” knocks. Could this opportunity be the one that makes Clay, the guy, who the team cannot send back when Brad Hand, Patrick Corbin, and Jon Lester all return back to the team? Could we see someone Wally Pipp‘d? It has happened before. Time will tell, and Clay has had been building up to this moment and knows all too well how the system works. Fair or unfair, the best players don’t always get their chance.

This Spring Training, Clay was in the final cuts. He was looking real good until he had a poor final outing which seemed to seal his fate.  But prior to that, it looked like it was down to Clay and veteran lefty Luis Avilan for that lefty spot in the bullpen. Clay’s first spring training with the Nats finished with a 3.12 ERA over 8 2/3 innings. That final outing made a tough decision a little easier for Martinez to go with Avilan who was only with the team on a minor league deal.

“That’s what this game is about, getting chances and succeeding — and [Clay] did that today,” Martinez said. “He’s going to be a big part of our future, no doubt about it.”

The manager liked what he saw. He put Clay immediately into a tight game that turned into a hi lev situation. If Clay didn’t do the job, it would have been egg on his manager’s face as to why he made that move. But according Sam Clay’s girlfriend of four years, Jordan Smith, she told me that Sam thrives in high pressure situations.

“You put him in a situation where there’s pressure — he shines, so I feel like they must’ve seen that,” Smith said.

Although Clay admitted there were some nerves going, he didn’t melt on the mound like you see over and over with some pitchers in their debuts who lose all control.

“There was a little bit of nerves, but that always seems to happen,” Clay said after the game. “I was just glad I could come out and pitch pretty well and put up a zero.”

Some relievers need that pressure to get the adrenaline going, and Clay’s fastball was humming. He topped out at 94.2 mph on a sinker to Freeman for a strike. Until today, he did not even realize he hit that on the radar gun.

“I didn’t know that I hit 94,” Sam said to me laughing. “I try not to check the scoreboard for velo. I usually start off in the low 90s and throw harder as the season progresses. So it’s good to see that I’ve got 94 so early in the season.”

Clay was advertised as a soft-tossing sinkerballer with a slider and changeup who specializes in groundballs. There was certainly extra octane on that fastball.

“Well, I feel like what I do best is I get a lot of groundballs. I have a very high groundball percentage. … I get a lot of strikeouts,” Clay told me. “Those are the two things I do very well, and are big for me.”

Next up for the Nats is the Los Angeles Dodgers for their home opener. Ho hum, just the reigning World Series champs, and they have two former MVPs on their team in Mookie Betts and Cody Bellinger. Maybe Clay will face both of them. 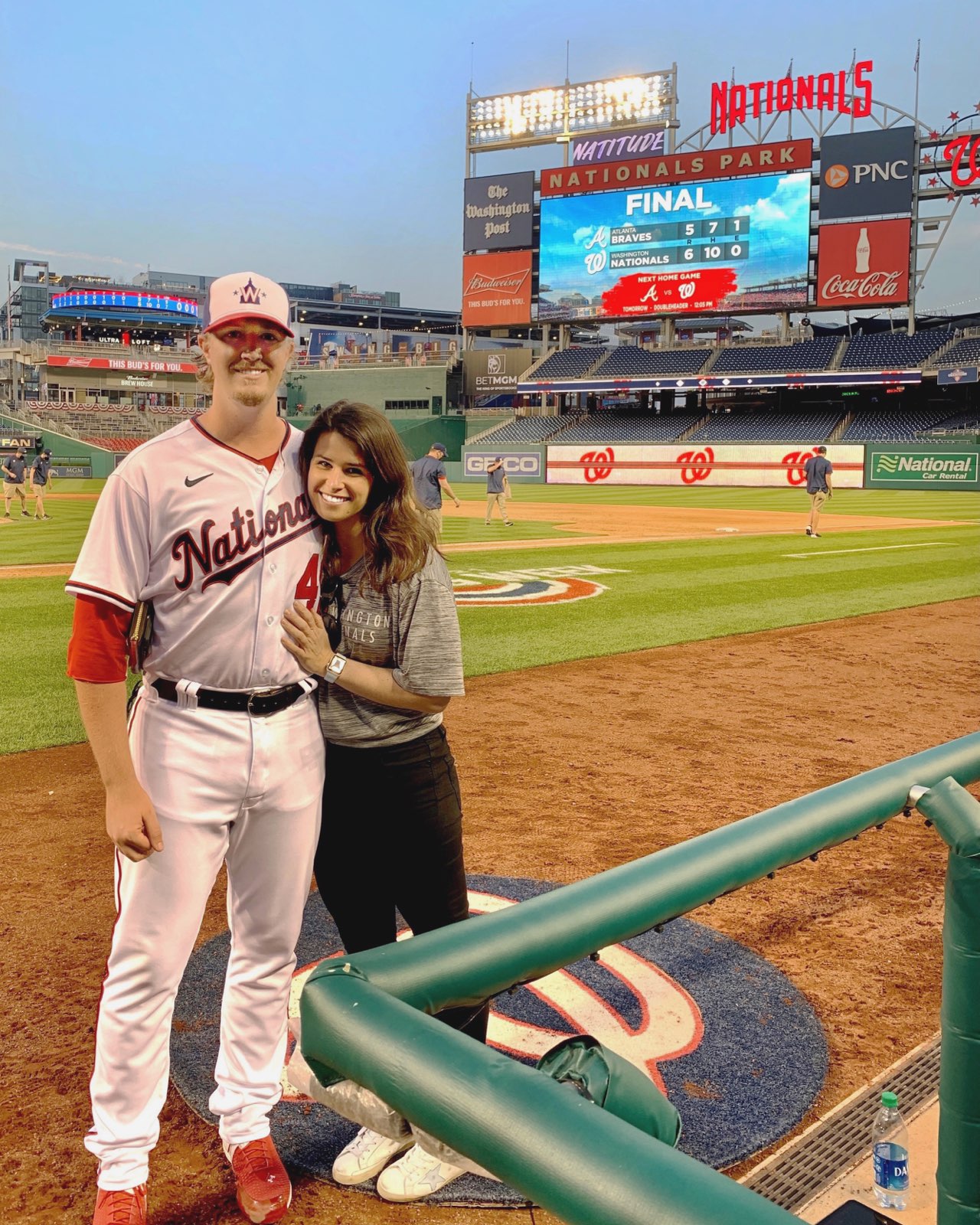