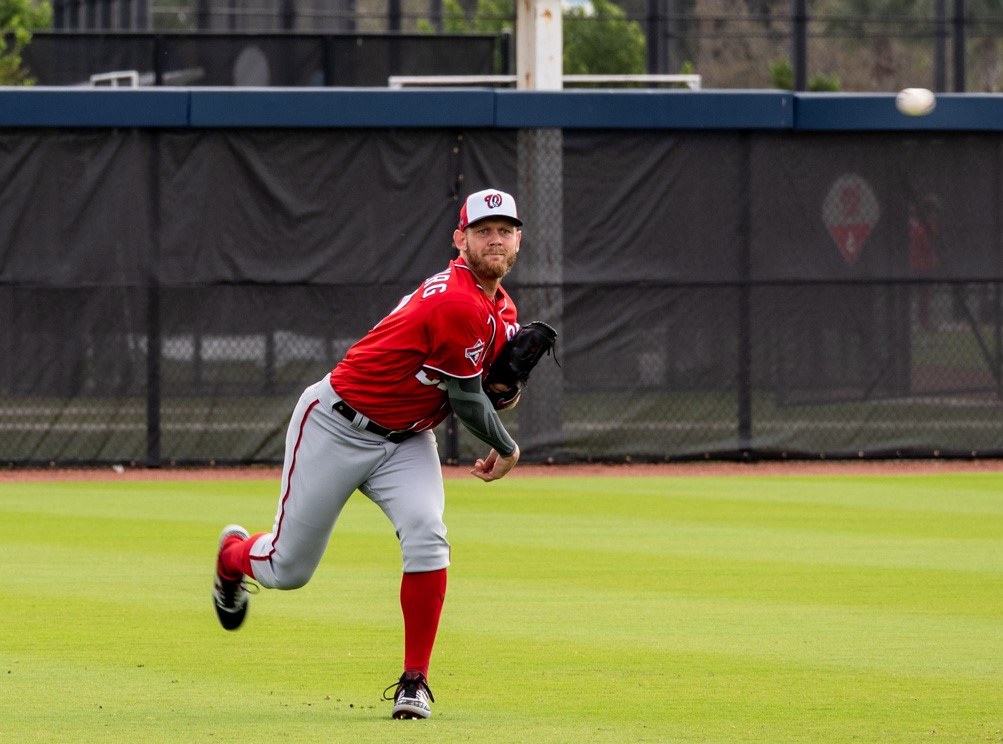 The most serious of the injuries would be with Gerardo Parra and Aaron Barrett who both had knee procedures done, but neither player was projected to be key parts of the 2021 roster. Right-hander Rogelio Armenteros who is a fringe starter was shutdown late last month with arm pain but is reportedly back to throwing. Welington Castillo who was signed as catching depth is dealing with a shoulder issue, and he is probably fourth or fifth on the depth chart. A different story with Strasburg, Jon Lester, and Tanner Rainey who are all key components with Stras and Lester combining for 40 percent of the starting rotation.

Stephen Strasburg exited today’s game against the Astros with an apparent leg injury after landing awkwardly on the mound in the third inning. pic.twitter.com/Pg41RD5Sa2

Fortunately for Strasburg, the doctors are calling this a minor strain of his left calf muscle. But they do not want it to lag, and need to get it to be at 100 percent.

“It’s definitely not something I’m concerned about,” Strasburg said. “Everything was feeling good, and then the calf grabbed me a little bit. Luckily, the reports and stuff from the doctors [show] nothing major. It was just kind of more of a precautionary thing, and take it day-to-day and see how it feels tomorrow.”

Strasburg then got philosophical with some more thoughts when asked about the number of injuries he has endured in his career.

“We’re all on different journeys — I guess,” Strasburg said. “[I have] just got to keep telling myself I’m going to keep grinding, keep working hard and roll with the punches.”

For the left-handed Lester, he threw a bullpen sim with live batters earlier today as he recovers from thyroid surgery. His path to the mound in a real game could come later this week or certainly the following week.

“He looked good,” manager Dave Martinez said. “He was about 75 to 80 percent, but the ball was coming out well. … He mentioned about getting in a game. We’ll see how he feels tomorrow.”

Lester’s road to getting back was not as crucial until Strasburg went down today. The Nats could start the season with four starting pitchers due to day’s off. Now with question marks on both pitchers, things just got more dicey.

As far as Rainey goes with the soreness in his collarbone area, he is now recovered from that, but now has to get into form and get back into action. Like Lester, he also threw a live BP session this morning. Reportedly he threw 20 pitches at 80 percent effort as he builds up.

“What I’d like to do with him is give him another two days in between,” Martinez said. “Get him back on another live and let him amp up a little bit — as if he was coming in a game like he normally does — and get him up to about 90, 95 percent. After that, hopefully everything comes out well and we can start plopping him in the game.”

While playing in Japan, Parra injured his knee, and we were told had MCL surgery which has a 4-5 month recovery time. The Nationals signed him to a minor league contract on February 17 with an invite to Spring Training with the knowledge his knee would keep him out.

“We still believe that he can play and help us win games,” Martinez said. “We’re trying to get him healthy right now. … As soon as we get him on the field and get him some games, we’re going to give him every opportunity to play. He was such an influence in our roster in 2019. But with that being said, the reason why he’s here is because we feel like his veteran presence, the way he goes about his business, he’s always pleasant to be around, but also he could still play.”

The veteran right-hander has unfortunately known the injury bug too often in his career. This time he underwent an undisclosed  right knee surgery, and he was scheduled to return to Florida this weekend. The good news is Barrett’s arm is supposed to be fine. He’s had Tommy John surgery and endured a broken bone in his arm in the past. His road back to the Majors was a minor miracle. The Nats signed him back on a minor league free agent deal, but it appears his physical did not show the knee issue.

“He was here early [in camp], and he was throwing, and he felt something in his knee,” Martinez said. “[He] went and got an MRI, and he had to get it cleaned up.”

The right-hander was shut down after reporting soreness in his arm, and is back to throwing. The 26-year-old pitched one scoreless inning in a Spring Training game and has not been seen since. He is on the 40-man roster after a waiver claim was made by the Nats.

“After his first outing, he had some discomfort in his arm,” Martinez said.

Last Wednesday, we learned that the veteran catcher was bothered by a shoulder issue at the start of camp. He is the same player who opted out of last season due to COVID concerns.

He is reportedly now throwing and taking dry swings with the bat. At, 33, he signed a minor league deal with the Nats and is probably fourth or fifth on the depth chart behind Yan Gomes, Alex Avila, and Tres Barrera depending on where you see Raudy Read and Blake Swihart.

The other injuries are on the minor league side of camp with players like prospect Tim Cate and Jefry Rodriguez. As we broke the news on Cate, he hurt his arm early in camp and is back in a strengthening and soft-toss program.

Rodriguez signed with the Nats as a minor league free agent, and he has yet to see any action in spring training due to shoulder stiffness. Martinez  indicated that Rodriguez had not received medical clearance to pitch (as of last week) so his timeframe is unclear at this point.

Neither player was projected to make the Opening Day roster, but both are seen as depth pieces.