The bullpen mix favors those with MLB success, but don’t count out Sam Clay! 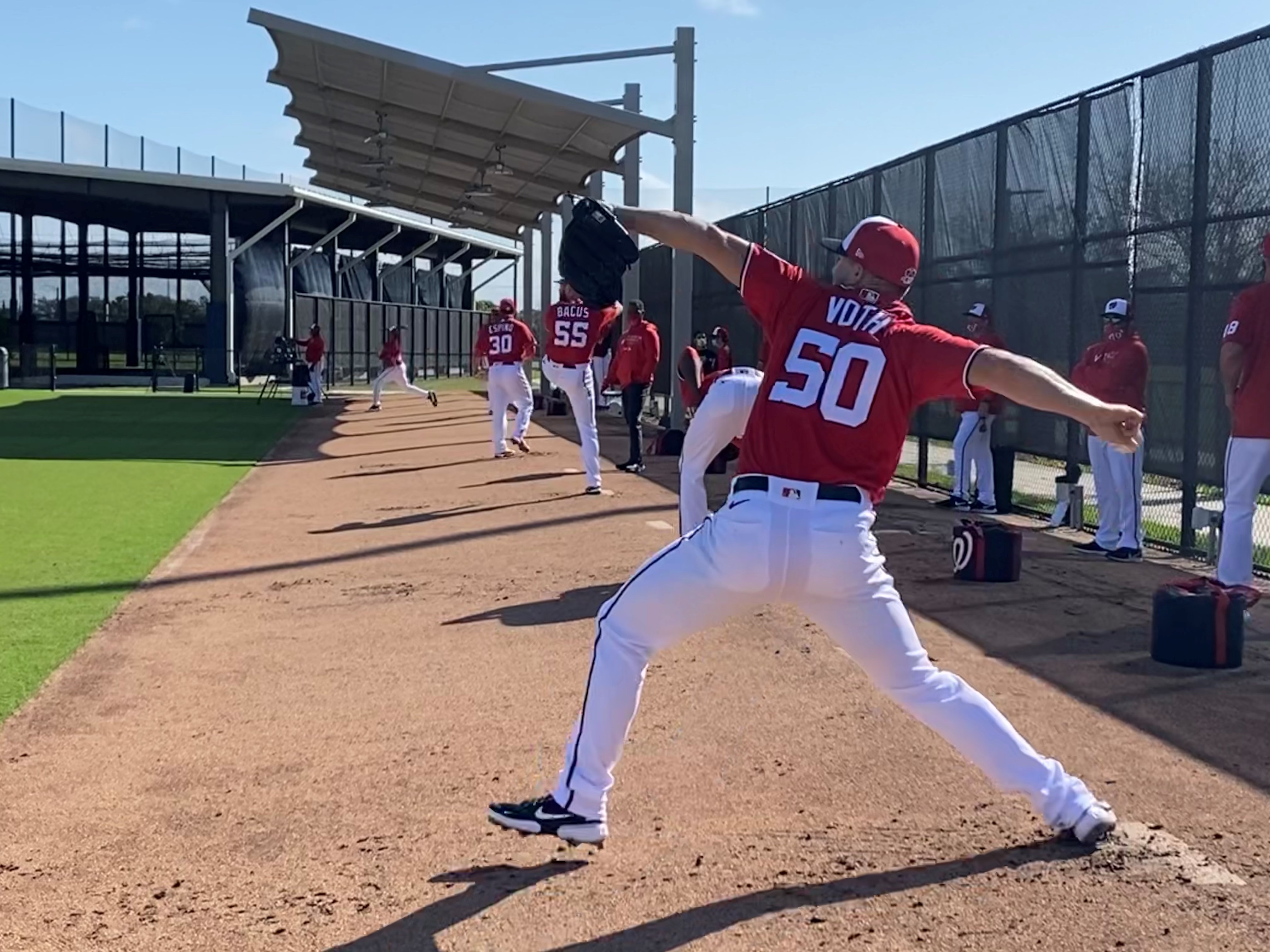 Photo from the Nationals for the media

If you went by professional experience versus MLB success, Sam Clay might be a shoo-in for this Washington Nationals bullpen for Opening Day. He had not surrendered an earned run off of a home run in his entire career as a relief pitcher. If his shortstop Jordan Gore doesn’t boot a ball then Clay gets through that 7th inning without giving up that home run in August 2018. Maybe it was a frustration pitch to Jason Morozowski. But it was an important reminder to a sinkerballer that your infielders occasionally boot balls. After an error, stay with the plan — and get your 3-outs without giving up any runs.

At the end of last season, the only current lefty pitchers who were healthy from the 60-man pool: Patrick Corbin, Matt Cronin and Ben Braymer. Of course one of the first moves of this offseason from general manager Mike Rizzo was to add lefty depth to the bullpen. He followed the path he took last year with Kyle Finnegan and did some early minor league shopping and snagged Sam Clay on November 18. Last year, the team relied a lot on right-hander Wander Suero to get lefties out, and this offseason, Rizzo was determined to add lefty depth.

“We feel like some of our right-handers [in the bullpen] can get lefties out,” manager Dave Martinez said. “Obviously we have some lefties in camp who we will take a look at. It’s nice to have a multitude of lefties in our camp. So we’re going to take a look at everybody and put the best team that we can possibly put out there to start the season. Today we saw some good ones. Today I saw a bunch of left-handed pitchers throw.”

Clay, a fourth round pick for the Twins out of Georgia Tech in 2014, spent the last seven seasons in the Twins system but never reached the majors. He pitched in Rochester which is now the Nats Triple-A home. When he became available as a minor league free agent, Rizzo signed him to a big league deal just like Riz did with Finnegan last winter. That move immediately gave Clay a coveted spot on the 40-man roster which was unexpected when he entered free agency.

“[Sam Clay] threw [yesterday] and he looked really good,” Martinez said. “He throws a heavy ball, and we like him because he throws a lot of groundballs and has a good mix of pitches. We’re going to keep a close eye on him.”

What Clay specializes in begins with getting strikeouts if he has a batter in a 2-strike hole, groundball outs when bases are empty, and keeping the ball in the field of play. He relies on a good defense behind him to keep those bases empty. Also, he led all minor league pitchers with a 71.3 percent groundball rate. In his entire minor league career spanning 405 1/3  innings.

“There’s a really good culture here and a lot of good players. I’m excited to be part of it,” Sam Clay told me. “I throw a sinker, a slider and [circle] changeup. I try to throw every pitch to really any batter — left-hander or right-hander.”

Obviously Clay will rely on his scouting reports and study video with his pitching coach and catchers. He will find out how specialized it is when he gets an opportunity to face a Bryce Harper, Freddie Freeman and Michael Conforto who were the three top names that Brad Hand rattled off.

The lefty has a good opportunity in front of him as one of the few southpaws in the system, and he has the advantage of being on the 40-man roster which the newly acquired lefty veterans Luis Avilan and T.J. McFarland do not after they both signed minor league deals. The top reliever prospect, Cronin, who was drafted less than two years ago is not on the 40-man. Right now, the only lefty ‘lock’ for the Opening Day bullpen is Brad Hand, and he was acquired via free agency last month.

Clay began his professional career the way most relievers do — as a starter, followed by a  conversion to the bullpen. The rare exception is Cronin who was drafted as a proven reliever. Clay switched mostly full-time to the bullpen in 2017. While his reliever ERA in the minors is not stellar at 3.48, he did compile 20 saves and 200 strikeouts in 188 2/3 innings pitched in the Twins system. He knows he has to cut down on the walks.

What changed this week was the Nationals added the right-handed Jeremy Jeffress, 33, on a Minor League deal with a $1.25 million salary.  He would bolster a bullpen that is crowded with hi-lev talent when you look at Hand, Daniel Hudson, Will Harris, and Tanner Rainey as locks plus Finnegan and Suero look like they have very good shots to make the roster, and then Rizzo and Martinez have to consider a long-man from their pool of players without minor league options like Austin Voth. That is seven names for a bullpen that might only carry eight players until rosters expand in September. Some think if Jeffress looks good he will snag the last spot in the bullpen, and in 2020 he pitched slightly better against lefties than righties.

Having so many pitchers with closing experience could keep the back of the bullpen fresher. 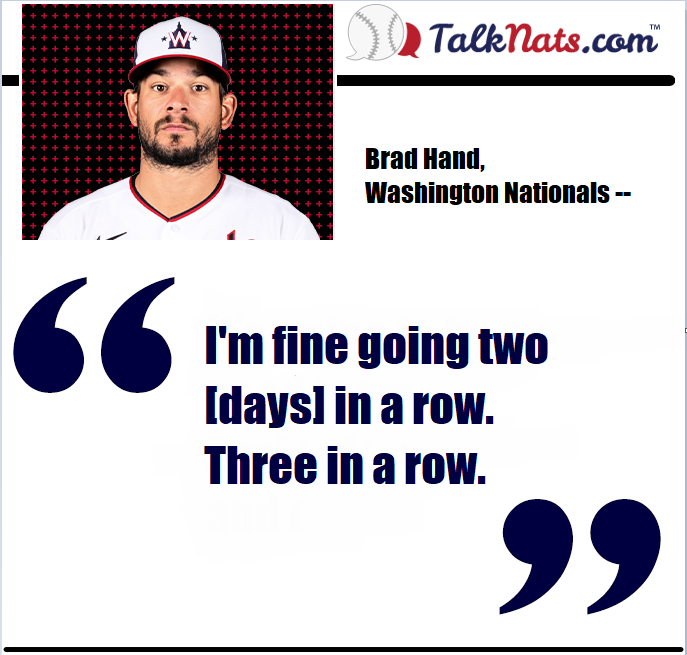 In 2020, Martinez had 5 relievers pitch three days in a row in 2020. That can work if the pitch counts are low. Rainey did it twice in 2020 and his season finished abruptly with a forearm strain.

“It’s nice to NOT have to use these guys three out of four days,” Martinez said. “A lot of these guys, they’ll pitch back-to-back days. That third day is kind of …”

Yes, teams in the analytics era have tried to stay off of pitching relievers three days in a row, and while Hand said he can do it — you try not to.

If you believe there is an opening in the bullpen competition, there are several candidates.  Clay and his former teammate in the Twins system, Ryne Harper, should not give up hope. If the last spot does favor a lefty, it could come down to Clay, Braymer, Cronin, Avilan, and McFarland. For Clay, he told us why he thinks he deserves a shot.

“Well, I feel like what I do best is I get a lot of groundballs. I have a very high groundball percentage. … I get a lot of strikeouts,” Clay told me. “Those are the two things I do very well, and are big for me. I try to pound the zone as much as possible, and my command has only gotten better the last two years. … There are a lot of good pitchers here so I’m trying to give myself the best opportunity to compete and get a spot.”

That is the formula. Get outs, and prevent runs. At some point Clay will make his Major League debut. When that will be sometimes relies on circumstance. Since he has options, he could start in the minor leagues and get a call-up. He has certainly paid his dues, and the 27 ¾ year old thought he was going to get that opportunity last year with the Twins, but he was not on the 40-man roster. Last year the Nats gave numerous pitchers their MLB debuts like Finnegan, Braymer, Seth Romero, and Dakota Bacus.

In Clay’s family, he is not even the most famous of the five children. His brother Cody and sister-in-law JiJi own the best barbecue joint in Atlanta and have been featured on several TV shows from the Food Channel to numerous articles in food magazines. In fact in the offseason, the Nats pitcher makes extra money running deliveries for Heirloom Market BBQ. Yes, he has delivered to plenty of Braves fans, and Sam lives within a few miles of Truist Park, home of the Braves. This offseason he worked out with Matt Wieters and some players in the Braves system. Off the field is one thing, on the field is another, and Clay is laser focused on helping this Nats team win.

New this week, the latest edition of the #Nationals Daily Bases on https://t.co/2qXDtdFXFz is in both English (this tweet) and Spanish (following tweet). pic.twitter.com/Up6dqkJUYW