Jon Lester is officially on the Washington Nationals roster! 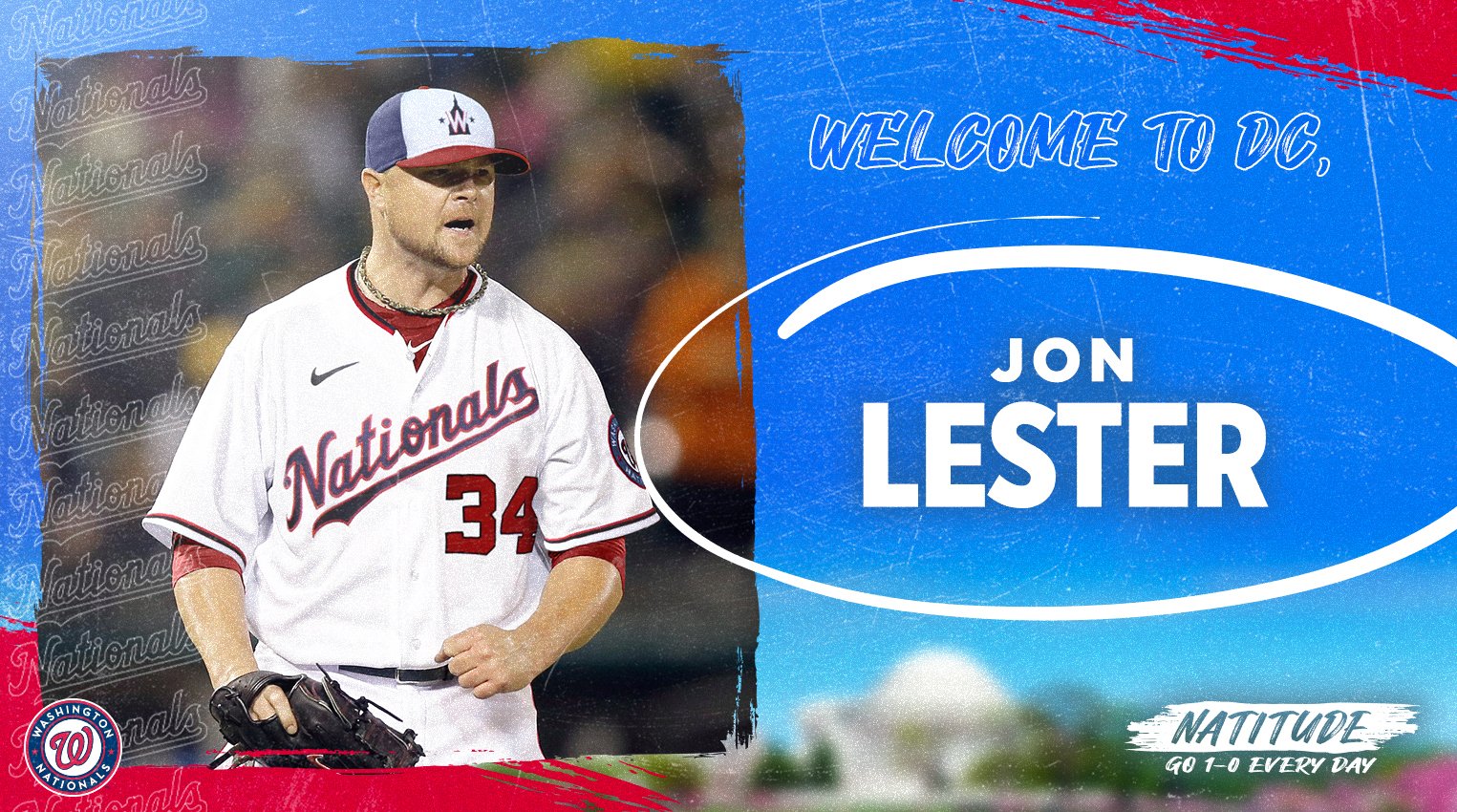 Graphic by the Washington Nationals

It took nearly nine full days to announce that Jon Lester was officially added to the Washington Nationals roster due to delays in getting his physical completed. Normally, signings are delayed due to making roster room for a player, but in this case the Nationals 40-man roster had three open slots before they added Lester. In other situations which are rare, there are issues with the physical that would require a second opinion. In Lester’s case, he was playing in the Pro-Am portion of the Diamond Resorts LPGA tournament near Orlando over the weekend, and he took his physical today and obviously passed.

Now that Lester is official, the Nationals rotation is completed and could be seeded in a way to separate the two lefties, Patrick Corbin and Lester, by possibly pitching Joe Ross in between Corbin and Lester.

The rotation could seed:

In order for the 2020 Washington Nationals to be successful, all of these pitchers must pitch better than the projections that FanGraphs have posted. Erick Fedde pitched to a 4.95 ERA last year as a starter averaging exactly 5.0 innings per start. The Nationals did not bring in Lester to pitch worse than what Fedde was putting up in 2020. The same goes for Corbin who is being paid in excess of $23 million, and they are not paying him to pitch north of a 4.00 ERA.

Each of these pitchers had a long off-season to work on their stuff. Lester made it clear he was coming to the Nationals to win another ring.

“I want to win,” Lester said today on a ZOOM call. “I still have the drive to win. I want to bring another ring to D.C., and hopefully we can do that.”

That is music to our ears. It is clear from anyone who knows Lester that he is a competitor who signed with the Nats to win.

“We already have a great staff with Stras, Scherz, and Corbin,” Kyle Schwarber said. “We have Joe Ross, Fedde, Voth, and you’re adding Jon Lester. You’re adding a lot of postseason experience.”

“I think Jon is really going to thrive in this rotation here. You have a bunch of established veterans who have done a lot in this game already. I think [Lester] is gonna want to go out and show these guys what he is about and how good he really is. … That back-end of the bullpen is legit. … It’s a really good bullpen.”

While the heart of a champion is a key, Lester turned 37 a few weeks ago, and the body won’t always do what the mind asks of it. Age regression is real so Lester is trying to evolve as a pitcher.

“Every year has changed for me as far as what I’m doing to try to stay durable and try to pitch as many starts as I can,” Lester said. “Just because you get older, things change. You can’t do the things you once did when you were 23, 24.”

“It’s just an evolving thing, and something I’m learning every day.”

Anyone with an analytics background can read a chart to see what generally was not working. The best pitching coaches and scouts can see it. Most pitchers can feel it. To have Rapsodo and Trackman to help a great pitcher through it is invaluable.

What we found in Lester’s 12 starts in 2020 was that he was excellent for 7 games and awful in the other 5 starts. That’s a .583 winning percentage. The Nats probably saw this as a real plus because his overall stats were heavily tainted by the 5 duds. They probably also saw that Lester has to rework his four-seam fastball, curveball, and in 3 of his 5 duds, his cutter did not have the desired negative horizontal movement and on average — did not cut. Suffice it to say that if Lester’s cutter is working, he is generally going to have a good outing. In 9 of his 12 starts, the cutter was his most used pitch.

Because I wanted to neutralize the 5 dud games in 2020 for Lester, we created a chart to look at pitch usage and for the year how each pitch worked or did not work. In order to simplify the chart, we did not include pitch movement which we had on another chart. Here is the basic chart we created:

Lester started his 2020 campaign with three very good starts. There were extra rest days between those three good starts. No start lasted more than 6.0 innings for his season. The duds seemed grouped together in sets of two except obviously the season ended before we could determine if a dud was going to come after the 9/26/2020 start. His best statistical game of the season was on 9/11/2020. Overall, the sinker, changeup, and cutter were his best statistical pitches for the season.

One other issue that has dogged Lester is his lack of a traditional pick-off move. He has improved his delivery time to the plate with runners on-base the last few years. Since 2016, there have only been 46 stolen bases off of Lester in that timeframe with a 61% success rate which happens to be 12 points better than the league average of 73%. Part of that success has also been credited to his catchers like Willson Contreras who has caught Lester more than any catcher in his entire career.  Speaking of catchers, a fun fact, ex-Nats farmhand, Derek Norris, had the best catcher’s ERA (2.35) with Lester based on their time together in Oakland. New Nats’ minor league acquisition Blake Swihart caught Lester in bullpens back in spring trainings with the Red Sox.

The other positive is that Lester does not have to be feeling the pressure that he must be the ace of this staff. With Scherzer, Strasburg and Corbin in front of him, he can relax and will often find himself in pitching matchups opposite some of the other team’s back of the rotation starters who are struggling to keep their jobs.

“I’ll tell you what, it’s going to be nice to just kind of sit back and watch these guys work,” Lester said. “Obviously, I’ve seen them from afar and got to compete against them for a long time, and I’m excited to work with them.”

“I’m just excited to dig into their minds and see how they prepare and really just stay out of the way. I want to be kind of a fly in the wall with this rotation and just try to help out as best I can.”

Jon Lester is a three-time World Series champ and five-time All-Star. He has the desire to win. If the Nats can keep a .583 winning percentage in Lester starts, that will be a big boost to this team and keep them on a 95 win pace — and that is a good thing!