The Hot Stove boiled over yesterday! 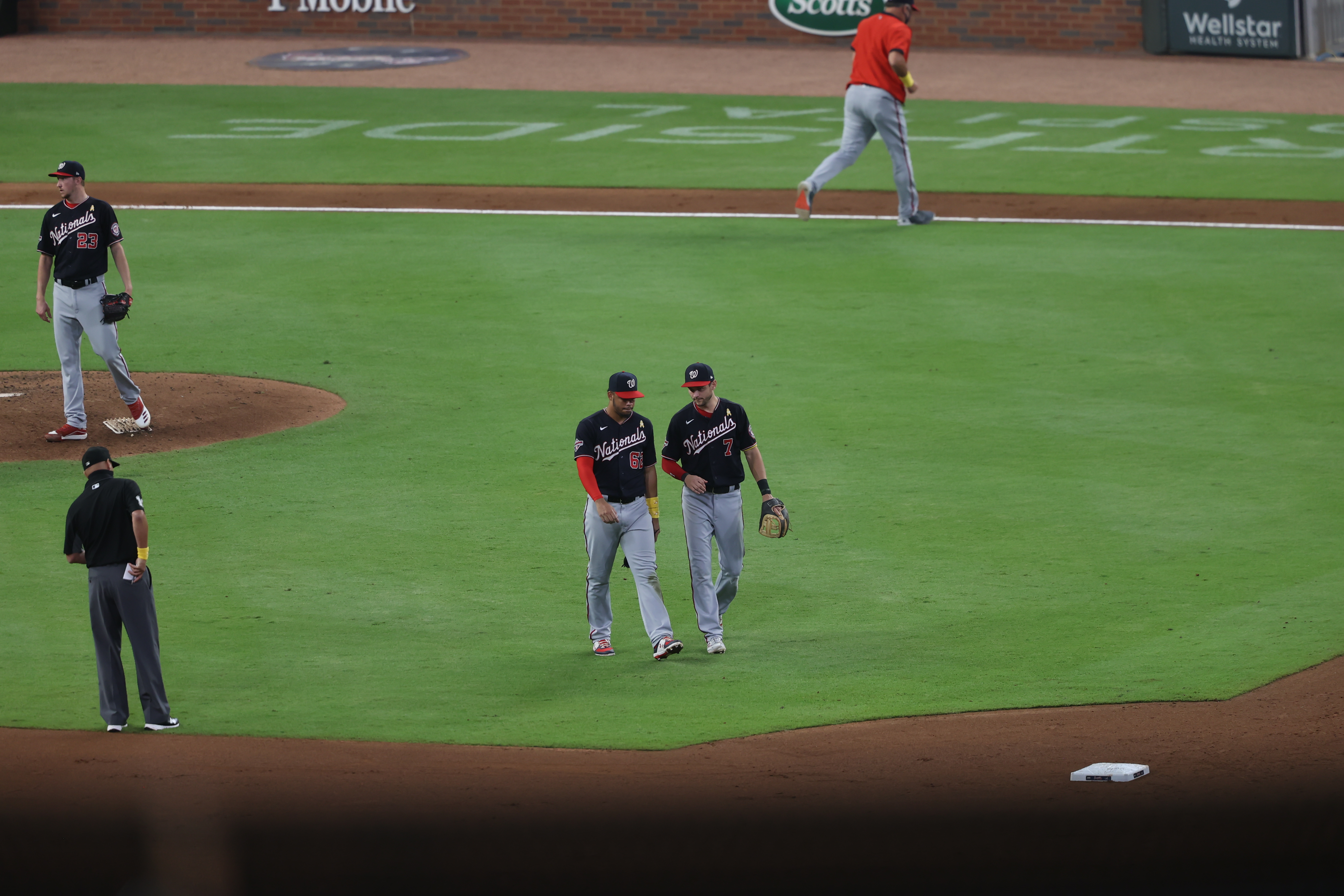 Within hours, several free agents were reportedly signed yesterday including Cesar Hernandez, Tommy La Stella, Marcus Semien, Andrelton Simmons, Freddie Galvis, Wilson Ramos, and J.T. Realmuto. The available infielders and catchers inventory shifted dramatically in the wake of those signings. Almost every name on that list, sans Galvis and Simmons, had been discussed here in detail as well as on the rumor mill. In fact yesterday on TalkNats, lineups were formulated if general manager signed Hernandez, La Stella or Semien. Back to the drawing board. Of course the Washington Nationals have enough players on their roster to fill what many people consider the weak links on the team which notably are third base, backup catcher, and fifth outfielder.

As of now, according to manager Dave Martinez, his starting lineup would be:

Yes, Kieboom as the manager said will go into Spring Training as his starting third baseman. Of course all of that could change in an instant if the team acquires an upgrade. The only internal challenge to that lineup would be shifting Castro to third base which he manned in 2019 for Miami and place the 20-year-old, Luis Garcia, at second base.

If the season started today, Tres Barrera would be the backup catcher to Gomes unless the team signs Tyler Flowers or Alex Avila or traded for a player like Willson Contreras. Of course Welington Castillo and Blake Swihart will additionally be in Spring Training as non-roster invitees according to a source.

Breaking news: catcher Blake Swihart, former #1 pick and top prospect of the Red Sox, signed a minor league deal with the Washington Nationals with an invite to spring training a source told us. #Nats

For those who do not know Swihart, in 2014 he was a top-25 prospect in all of baseball as a Nº. 1 pick by the Boston Red Sox in 2011. His debut season was in 2015, and he looked to be ready for a great career until the injury bug hit him. He became a free agent going into last year and was in Texas’ camp. The switch-hitting catcher turns 29 in April. For now he is a depth piece in the Nats’ system. Coincidentally, Swihart had caught Jon Lester in bullpen sessions back in the Red Sox days in Spring Training.

Otherwise, the last spot might be an outfielder who hits righty to pair up with Schwarber unless Josh Harrison is that player. There are so many directions that Rizzo and Martinez can go in to fill the remaining roster spots.

“I think this lineup is going to score a lot of runs and be dangerous,” Schwarber said to an invited group of Nats VIPs on ZOOM last night. “I’m all about winning. I believe in my team and my teammates. I want to impact the game some way. I want to help this team win.”

Schwarber spoke about working hard to get better defensively and he welcomes the padded outfield walls in Nats Park as compared to the hard walls in Wrigley behind the ivy. He is already working out in Florida and admitted that he met up with Nats’ hitting coach Kevin Long already.

“I was actually able to have Kevin Long come down to Tampa already and have a couple days to work with him,” Schwarber said. “I told him the biggest thing I wanted to work on was being able to get back on my legs. I felt that the thing that really hindered me this past year was I was out of my legs, I was super-upright, and I was really floating forward at contact and you can hit the ball as hard as you want but if you hit it on the ground to the right-side — you’re out.”

“And I think being able to get back on my legs to stay behind the baseball to drive to all fields. Everyone always says ‘hit the ball the opposite way’ is great, and I agree with that especially when the pitch is away. You know what, when you get pitched inside you want to turn on the ball and you don’t want to put it on the ground — you want to put it in the air. So I think just getting back on my legs and stay behind the baseball, make sure you’re hitting the ball where it’s at and go from there.”

Those who got to listen to Schwarber talk got to hear his thoughts on walk-up music and dugout dancing. He is very much aware of the Nats dugout dances after home runs, and said he has dance moves.

"Fun fact … I was in show choir. A lot of singing & dancing & spirit fingers. But I love to keep the energy high in the dugout. Any type of dancing is good for me and I'm ready for it." — Kyle Schwarber @kschwarb12 pic.twitter.com/SKFkVunwBH

Right now, officially, the 40-man roster is at 37 players. But if/when Jon Lester‘s deal becomes official, there will only be two spots open on the 40-man. We are into the ninth day since news broke a week ago Monday that Lester agreed to a one-year $5 million deal with the Nats. Several members of the media confirmed that. Hopefully that becomes official soon after his participation in the LPGA’s Diamond Resorts Tournament of Champions in Lake Buena Vista, Florida as part of a pro-am foursome over the weekend. Yes, Lester tied for 33rd place.

“We already have a great staff with Stras, Scherz, and Corbin,” Schwarber said. “We have Joe Ross, Fedde, Voth, and you’re adding Jon Lester. You’re adding a lot of postseason experience. I think Jon is really going to thrive in this rotation here. You have a bunch of established veterans who have done a lot in this game already. I think [Lester] is gonna want to go out and show these guys what he is about and how good he really is. … That back-end of the bullpen is legit. … It’s a really good bullpen.”

As we await news on Lester’s status, we will be in wait-and-see mode on any new acquisitions on this Nats’ team.