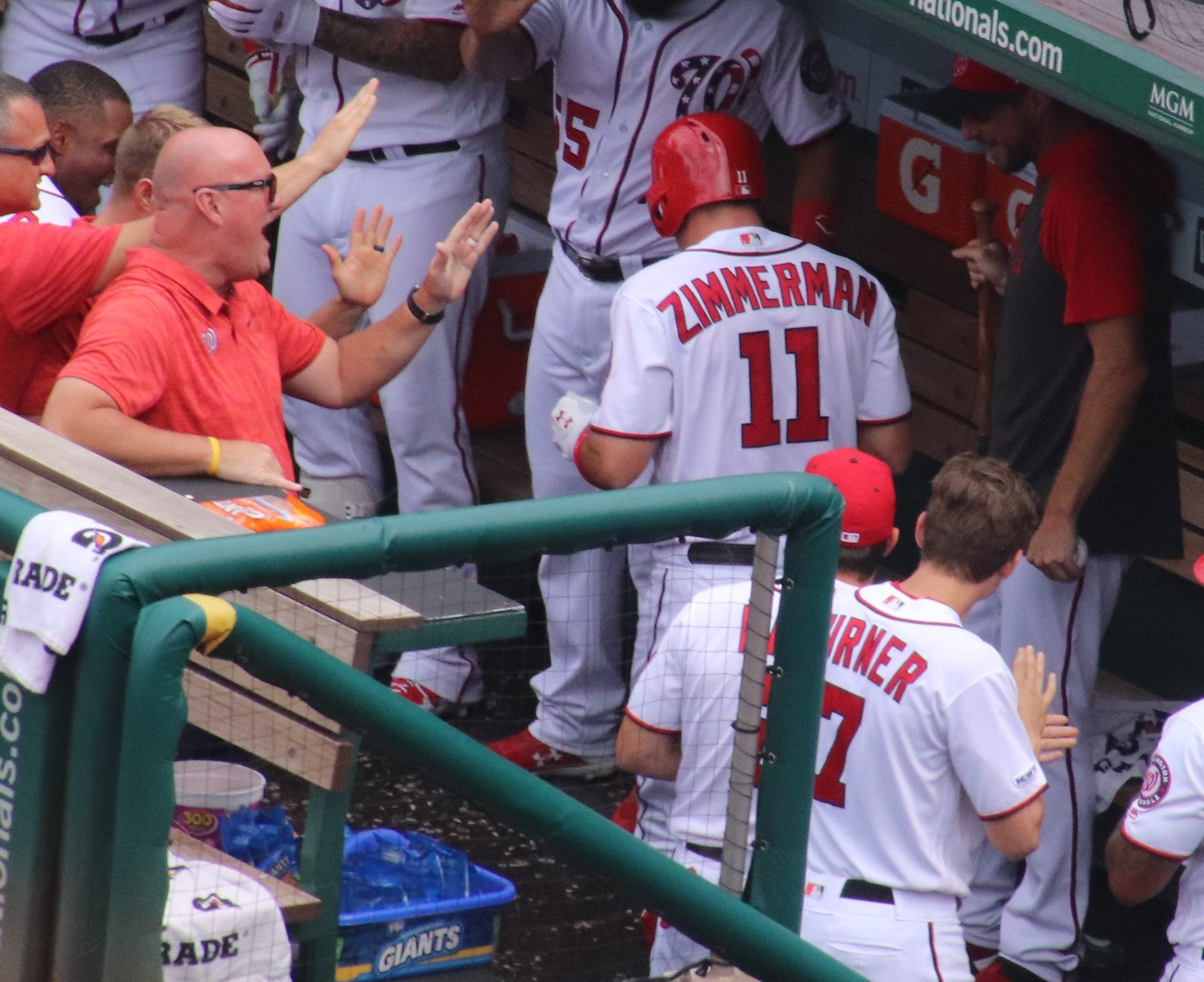 Now that Ryan Zimmerman is on board with the Washington Nationals, we can expect he will get a number of the starts at 1B when the opposing starter is a left-hander. It is time to evaluate alternative lineups.

Sao: Happy to be here!

Don: Sounds like a plan. And welcome to the conversation Sao.

I decided to format the line up so we could see them side-by-side. Makes it easier to see the differences IMO.

Don: So the first step is the relevant splits for each batter. I see players like Trea Turner and Juan Soto get all the starts and others are platooned. We know that won’t happen, but it is a good starting point. We also know that Gomes won’t/can’t get all the starts.

As in our other posts using this approach, the data are the 2019 and 2020 Game Day AtBat data table.

Sao: So what really jumps out at me here is Starlin Castro. Those are some massive platoon splits for a player I think we all figure is going to be an everyday guy. And the numbers suggest maybe he should be on the short side of a platoon after all? The free agent options on this table, Cesar Hernandez and Marcus Semien, have negligible splits and probably don’t make sense in a platoon configuration.

Steve: Sao, I’m also intrigued by Carter Kieboom. Would they play him as a bench guy? This will be interesting to see how the final 3 full weeks shakes out before the scheduled start to Spring Training camp opening. FanGraphs had Castro in a reduced role or they expect him to be injured — but now they moved him up I see to 511 plate appearances. It would be nice if there was a lefty infielder who could take some ABs. You’re also correct on some of the players with negligible splits. Their rest days should come on the days when you can get favorable matchups. That is where I want to see this team evolve to.

Don: If Kieboom is not going to start a lot of games, I would like him to spend some time in minors improving his game. I am still cautiously optimistic about his potential.

The 1-8 lineup for Today’s LH Starter

Sao: Just based on these numbers, we project like we’re going to do damage against left-handed starters. The bottom of the order is anemic, and we could obviously use another bat to lengthen the lineup, but we already knew that.

Steve: That’s the Davey “back of the napkin lineup” probably with Zim and JHay subbed in. As mentioned, FanGraphs thinks this lineup will score the most runs in the NL East. They did take it from 5.02 runs per game to 5.00 and today to 5.05 after tinkering with the Zim addition. Back to 83 wins and a team WAR of 32.7. It is a bouncing ball to follow all of their tweaks. So FanGraphs clearly likes the Nats offense over the Nats starting pitching and I feel the opposite. I would feel much better if you gave me Justin Turner or Marcus Semien on the high-end or Cesar Hernandez or Tommy La Stella on the low-end of the payroll spectrum.

Don: I have done some data modeling using regression analysis, and based on the models I have looked at so far, around 5 runs per game seems pretty much spot-on. I assume FanGraphs has better and more complete data than I do, so I feel good about their runs per game projections.

The 1-8 lineup for Today’s RH Starter

Sao: This is…less good. Especially when you consider Robles is almost certainly not going to start the season ceding this much playing time to Stevenson, especially given that he actually has modest reverse splits, and Garcia probably isn’t going to platoon with Kieboom with the Nats wanting both of their young infielders to get regular reps. The topline numbers can lie to you; going down the lineup, this is a starting eight/nine that’s really going to struggle to get anything going south of the cleanup spot. I’ve been thinking like Bo Porter, that Mike Rizzo still needs a big right-handed bat, but these numbers really suggest the Nats match up well against the few lefty starters they’ll see in 2021 and are going to be exposed by the much more numerous righty starters.

Don: Yes, we have the right Garcia in there. However the Baseball Reference linker linked the wrong guy. I have fixed that. But the numbers are the Nats Luis Garcia. Good catch Steve.

Steve: Thanks for fixing that! If Andrew Stevenson can step up that would be HUGE!

The 1-8 lineup With Hernandez LH Starter

Sao: I don’t think it will surprise anyone that I’m rather bearish on Kieboom, but even still, this isn’t a huge difference versus the previous lineup.

Steve: Fangraphs is bullish on Kieboom. Not as much as before but they still think he will progress to be a good player. I’m bearish on Kieboom until he proves he can do it in the MLB. He is a great kid with a very good minor league record. I am rooting for him to put it together.  I see a kid who gets into the batter’s box in MLB games and looks like he doesn’t have a plan. His power was non-existent in 2020 and I worry about his plate coverage in the outer-third of the plate but also inside. He kills balls over the middle of the plate as he should. If I take out the middle and upper middle of the plate where he is getting his hits, he is batting .123 in all other zones. So pitch him extreme-in or outside and don’t miss in the middle. That is too many holes for a Major League batter. 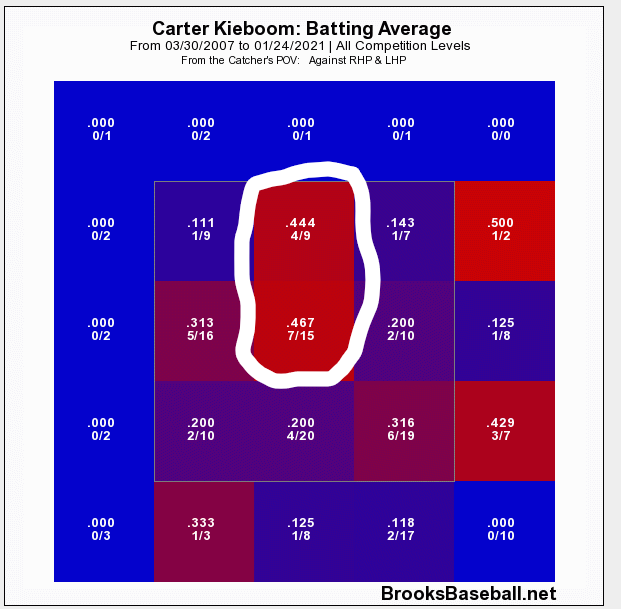 Don: I am a bit more optimistic on Kieboom for the simple reason that he has shown he gets better the second and third time he sees the same pitcher in a game. I see that as a sign that he is learning. Regardless, I would like to see him get more time in the minors.

The 1-8 lineup With Hernandez RH Starter

Sao: My feeling is any value the Nats get from signing Cesar Hernandez — who is a dirt dog, a scrappy guy I’ve always respected — is going to be largely on the defensive end. But no question that based on these numbers, he makes the lineup a little longer, and that could go a long way. Although I think it’s an open question as to whether the Nats would get more use out from bumping Garcia out of this go-to lineup, or Castro.

Steve: I like what I expect on Cesar Hernandez to be an overlooked bargain. I love the defense. I love the speed that if you bat him 7th or 8th with Robles just puts ridiculous speed on the basepaths before Trea comes up to bat. Hernandez is a +1.9 WAR guy who does things that don’t show up on paper. Yes, it shifts Starlin Castro to 3rd base where he surprisingly is better in his defense comparatively in that 2019 season. So maybe we just made the entire infield defense better???

Don: Hernandez is a good option. I look forward to seeing what Rizzo does.

The 1-8 lineup With Semien LH Starter

Sao: This lineup would really, really, really crush left-handers. I mean, we knew that, but seeing it laid out like this is dramatic. The question is whether spending whatever payroll space the Nats have left to go from being very good against lefties to being stupendous against lefties is the best use of those dollars. Maybe, if only to see if the Mets can set another new record for most runs given up in a game started by Steven Matz…

Steve: There are no holes there. I think Harrison in this new role will be even better knowing he is just a platoon guy. Get Robles going and woof woof this lineup will frustrate the lefties.

Don: I am not sure that Semien is an option, but I agree with both of you.

The 1-8 lineup With Semien RH Starter

Sao: No doubt that adding Semien gives us a lot more “bop” than adding Hernandez. But that choice isn’t made in a vacuum. Lengthening the lineup of guys projecting to an .800+ OPS against right-handed starters, though, really would be huge. That pencils out to a lot more innings with legitimate run-scoring opportunities.

Steve: Semien was a superstar in 2019. If that was an outlier, which some GMs fear, he will be a slightly above average player. You know what you got in Cesar Hernandez. A guy to give you length in the back of the lineup and coach up. In Cesar’s career, and this might shock you, as a #7 batter he has batted .314 in his career with a .388 (YES) OBP in 328 plate appearances. That is where I bat him unless you decide to lengthen the lineup by batting him 2nd where is numbers are almost as good.

Sao: Not to give you more work to do, but it would be interesting to see how Tommy La Stella compares.

Don: Ask and ye shall receive. Seriously, I have spent my entire career as a consultant dealing with the yeah but can you do X.  As a result now that I have the programs in place, doing another lineup is just a matter of cutting/pasting the into the program I wrote and pushing a button to create the tables.

Don: Great suggestion to look at La Stella Sao. Based on a quick look, he adds more value than Hernandez and is comparable to Semien – but likely more affordable.

Sao: It looks like the Nats as constructed are already going to handle lefties, assuming Zimmerman can stay healthy and Castro comes back all right from his injury. So even if La Stella vs. Kieboom in the go-to lineup after lefties is a push (as the numbers suggest), the added value against righties is tremendous. He doesn’t have as much power as Semien, obviously, but the Nats are going to be relying on their hairy-chested sluggers to supply power. My concern with the roster as it’s built now, if Rizzo stands pat, is that it won’t be able to keep the line moving and will therefore minimize the RBI opportunities for the top of the order. Seems like adding La Stella would go a long way toward addressing that. A .370 OBP against right-handed starters is rarified air.

Steve: I think I’d rather have La Stella or Cesar Hernandez to add to the pressure on RH pitchers. Both would be upgrades. Who costs less and who would Rizzo want?

This entry was posted in MikeRizzo, Point-CounterPoint, Roster. Bookmark the permalink.
← Previous Article | Next Article →