Fangraphs WAR rankings for the 2021 Nats and a COVID-19 vaccine!

How are WAR rankings related to a COVID vaccine? Few teams are as dependent on fan revenue as the Washington Nationals and if the COVID vaccine is here earlier than expected, the Nats could raise their outlook on revenues and simultaneously on free agent spending. More spending generally adds more WAR in projections.

When you have the worst TV deal in baseball and no stadium naming rights, the reliance on fan revenue is paramount to how this Washington Nationals team spends money on payroll. Fangraphs first 2021 roster WAR projection has the Nats as the 16th best team in baseball or the 15th worst team depending on how you want to look at it. Don’t worry, even if spending was not back fully, we would have expected some spending in the off-season. But this team has needs and needs require funds and funds are very dependent on projected revenues.

Will the Nats ownership group take this Pfizer news on a COVID-19 vaccine and give Mike Rizzo more money to spend? That is an unknown at this point because it is doubtful to assume full stadium attendance will be allowed from the start of the season. Part of the issue will be availability of vaccines to Americans by April 1st and beyond. Would the D.C. Government require proof of vaccination to enter Nationals Park? That is a distinct possibility.

But if you look at the Robbie Ray deal over the weekend — it was a healthy $8 million paid by the Blue Jays for a coin toss on a pitcher who some thought might only get $4 million given the tight spending environment that has been widely anticipated. Sure, we won’t say that the Ray deal is a barometer for what is to come, but it does set a mark for the other reclamation pitchers. Will Chris Archer get more than $4 million for instance? Stay tuned.

Buster Olney wrote this in ESPN yesterday, “The numbers in the contract offers this winter are going to be shocking for a lot of free agents, reflecting how far team payrolls will be scaled back for 2021. Club officials can’t change the terms of existing long-term deals, so it will be the veterans in the open market who will take the biggest hit. This will be especially true for those players who happen to play a position that bears a high volume of available options.”

Olney basically is saying again what we have been writing for weeks. It won’t be pretty, but there could be some optimism among the dark clouds.

Let’s look at what we do know. The Nationals WAR as projected by Fangraphs is currently at +29.3. The Nats were at a +45.8 WAR heading into February this year to give you an idea of where the team should be when Rizzo is finished. By the way, Fangraphs is projecting full-time designated hitters in the NL for 2021.

Here are the Nats individual WAR rankings for the position players. You will note that they are not projecting Trea Turner as a superstar in 2021, and their projections show Andrew Stevenson as a negative WAR. Maybe the only positive in the entire rankings is that Victor Robles is shown to be back to a positive contributor after a rough 2020 truncated season. 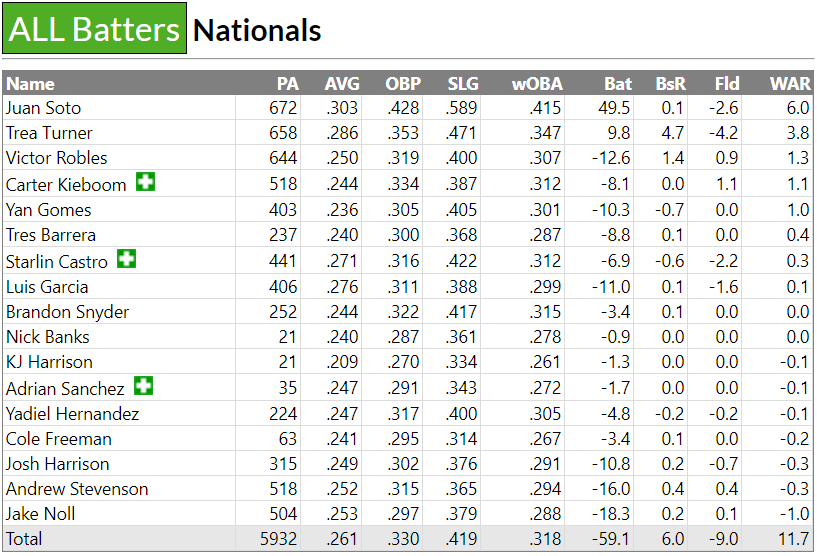 For the pitchers, Fangraphs is only projecting Stephen Strasburg at 163.0 innings pitched which means they think he will spend some time in 2021 on the IL. They also are projecting Max Scherzer to miss some time. Yes, age regression stinks, but a +4.9 WAR from Scherzer would be nice at a minimum. One other point to make is the inflated ERAs for Nats pitchers doesn’t have an ace in the bunch. Of course that is a large factor of the poor showing in 2020 that is being projected forward. 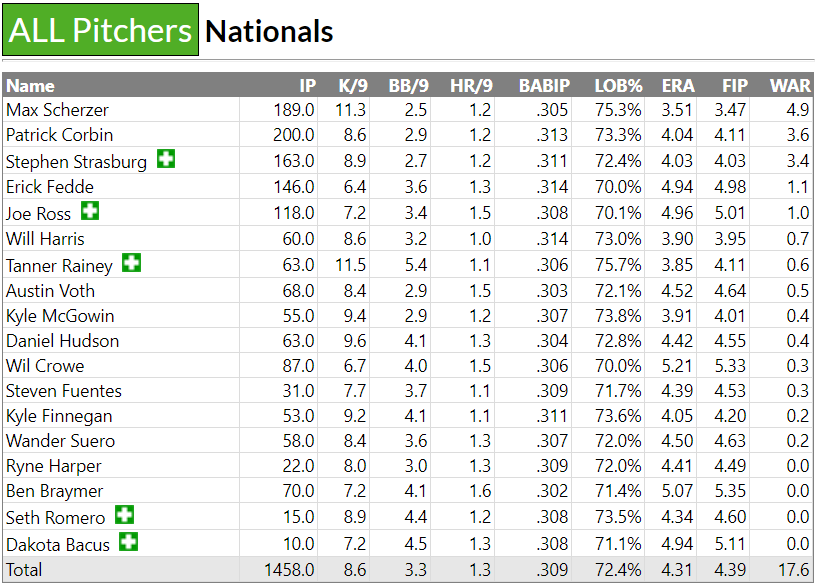