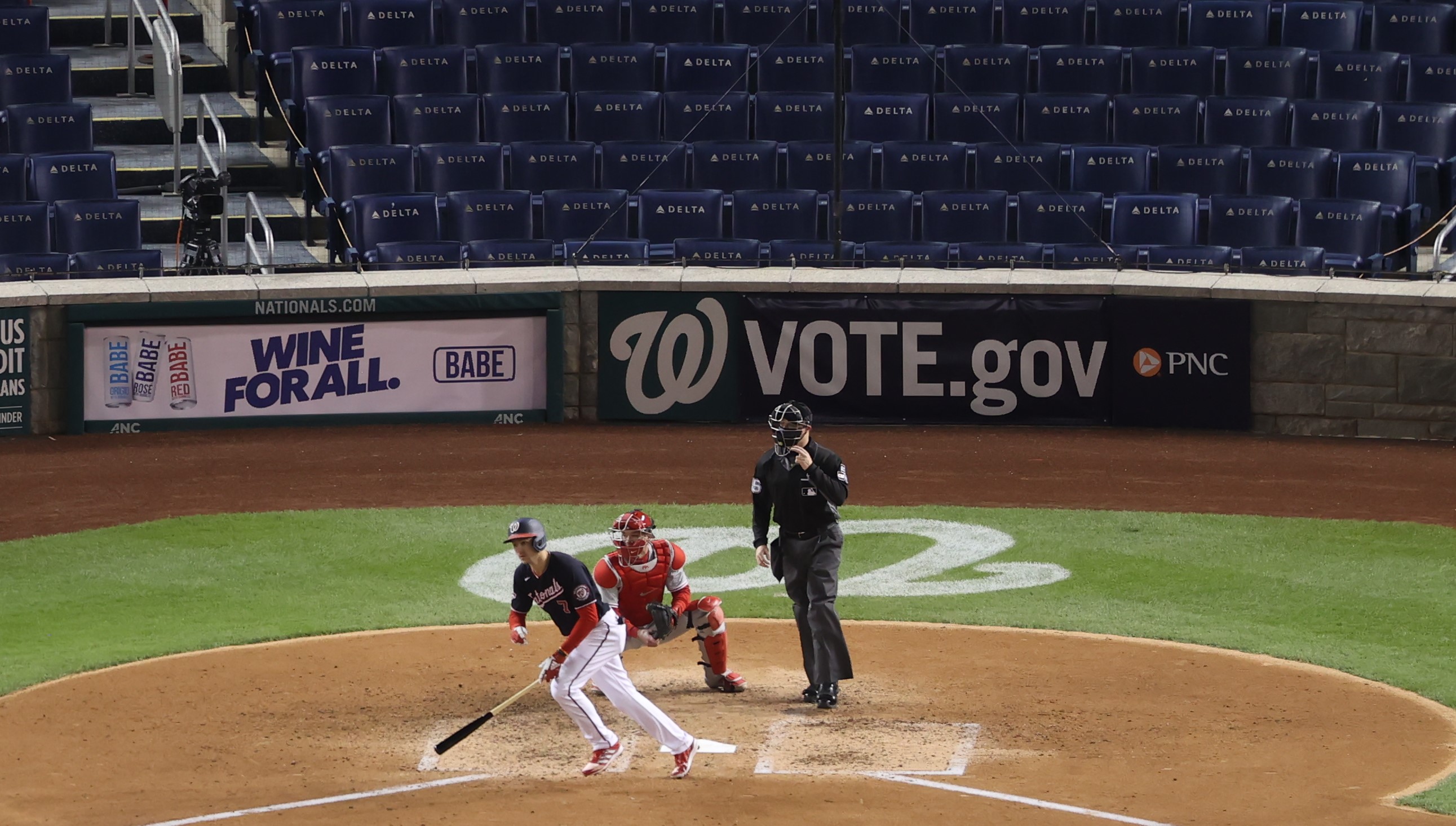 Over the next few weeks we will go through the Washington Nationals’ priorities we laid out for the off-season. In 2016, Trea Turner looked to be destined for stardom in his rookie season. With all of the negative press on Turner that his arm was too weak for shortstop, and he would never hit for power — Turner proved the doubters wrong again and again as the arm was more than adequate, and the power has been better than average. In the truncated 2020 season, the Nats’ shortstop put up elite numbers that surpassed his rookie season stats and flashed all five-tools in his .982 OPS season.

“He’s got a bright future,” Mike Rizzo said last month to NBC Sports. “I know that much. Going to make a lot of money.”

According to Rizzo, the extension talks started in that February/March portion of Spring Training and it did not come together. Our opinion is that it now has to get done before Turner enters this 2021 season. He is under team control right now for 2021 and 2022 and would be a free agent after that if he is not extended.

Valuing Turner could be a replication of Jose Altuve‘s deal because both players would be nearly the same age when Altuve signed his extension. Besides both players manning the middle infield, Altuve signed his extension after winning the AL MVP, a 5-time All-Star, 4-time Silver Slugger, and one gold glove. Turner, so far, has none of that, to date.

What did Altuve get on his extension? 7 years for $163.5 million of extremely backloaded dollars. Altuve only got paid $9.5 million for each of the first two years of the deal then $29 million for the final five years. There were no options on the deal which expires after Altuve turns 34. Did we mention that Altuve is represented by the Boras Agency?

In Altuve’s MVP season, he had a +7.6 fWAR a year after he had a +6.8. Turner’s best season was a +4.8. But Turner also has nursed some injuries that skewed his full season’s worth for two of those years. This year Turner was healthy all season and baseball could not say the same as the world was afflicted with COVID-19 and MLB had to shave the schedule from the normal 162 to just 60 games so when Trea turned in a +2.7 WAR this year, it would be a +7.3 extrapolated for a full-season and darn close to the output Altuve had in that MVP season.

My initial number was $152 to $155 million over 7-years for a Turner extension, and I would add two options on top of that to potentially put the deal over $200 million. That just feels like the right number to put it just below Altuve. Of course salary projections are subjective and the Turner/Lerner camps could feel differently on either side of that number. If Trea does not do an extension and could put up a full-season of WAR above +7.0, he would solidify a larger deal. There is risk to waiting due to market conditions but also future performance.

As shortstop Ian Desmond learned when he reportedly turned Rizzo down on a deal of  $107 million, sometimes the offer you turned down was the best deal you would ever see. Easy to see in hindsight — not so easy in foresight. Desmond’s earnings never came close to what Rizzo offered him on that day. At the time, Desi asked bench coach Randy Knorr afterwards, “Did I make a mistake [turning down the deal].”  Yes, yes you did.

On the other hand, there was Anthony Rendon who bet on himself and got his huge payday. But will that money be worth it in the end? You cannot buy happiness.

That is always the bottomline with taking new jobs as to whether the grass was greener on the other side. It never was for Albert Pujols, and the change of scenery many times is like forcing a square peg in a round hole like Bryce Harper in Philadelphia.

“If the deal’s right, if I like it, I’m not scared to take [an extension],” Turner said in January at the team’s WinterFest. “Same thing, if it’s not right, I’m not going to settle. Everyone, I think, knows their worth. [They] at least think they’re worth something — whatever that is, high, low, willing to take less or try to get more.”

“For me, I’m all ears. I’ll listen and communicate. At the end of the day, I like it here. I don’t think the grass is always greener on the other side, per se, and I’m happy where I’m at. If it comes to that, I’ll be happy to play here hopefully my entire career if they’ll let me. But, I’m also weighing all options. I think everybody should. If you don’t listen, I think it’s a little foolish.”

The only other deal that seems in the realm was Troy Tulowitzki‘s deal that would have paid him $126 million for that same 7-year period. The Rockies agreed after the 2010 season to a $157.75 million, 10-year contract that added $132 million over seven seasons, then traded him in July 2015 to Toronto and the contract was a disaster. Tulo only played 66-games from 2017 forward and his last year under the deal will be 2021.

This offseason, Marcus Semien could hit the free agent market. A year ago he had a breakout season, and this year he just looked broken at times. It is the classic “what have you done for me lately.” If Semien does not turn in a big postseason, his free agency could be a dud similar to what Didi Gregorius went through last year. Gregorius had a +4.7 WAR season with the Yankees in 2018 and did not sign an extension and had a disastrous 2019 and had to settle for a one-year free agent deal for $14 million and will be 31 in February looking for a new deal. Those are the risks.

In the not too distant future, shortstops like Francisco Lindor, Corey Seager, and Trevor Story could also be in the free agent pool. It is possible that Turner’s name will be included in that free agent list.

Yes, those long-term deals for Altuve and Tulo won’t pay-off, but it does not mean the Nationals should not try to extend Turner— and we have made it our top priority because this is a player to build around.