Photo from the Nationals team store

This game was suspended on August 9th in Nationals Park due to the infamous tarp calamity as the rain soaked the infield and made the field unplayable. The game will be finished in Camden Yards with the Nats as the home team because that is how things are done in 2020.

This is now a “Back to the Future” look to what happened last Saturday into Sunday as officially this is the 12th game of the season. The Nats suffered a tough loss in Game 11. Sometimes sports brings out the ugliness in people. The Nats lost a winnable game on Saturday night and were mired in a 3-game losing streak to match the 3-game winning streak that preceded that. It was so ugly on social media for Sean Doolittle that he deactivated his Twitter account. Doolittle stood up to the microphone after the Nats lost the game. He didn’t sneak away. Doo faced the music. Now as we hinted at as one of the options with the roster, we thought Doolittle could be placed on the 10-day IL when Will Harris was activated. It actually happened and both Ryne Harper and Kyle Finnegan remain.

“I don’t have a lot of answers right now,” Doolittle said to start his postgame comments. . “So, I’ll do my best with the questions.”

Doolittle has been  searching for answers. Sometimes ballplayers never find them. Hopefully Sean Doolittle does. Maybe it is best to read Britt Ghiroli’s updated article on Doolittle. It gives additional insight. Here were quotes from Doolittle on Saturday night:

“Mechanically, I might not be exactly where I want to be, but I feel physically like the ball should be coming out a lot harder than 89-90,” said Doolittle after Saturday’s game. “It should have some life on it. I should be able to get through an inning.

Huddy is Daniel Hudson who was collared by the blown-save-loss. Doolittle was actually credited with a “Hold” which is one of the those statistical gifts that distorts the true value of the situation. From Doolittle’s first pitch to his last in a total of 9-pitches and a span of less than 4-minutes as I timed it, Hudson had to warm-up and enter a game teetering on the edge of disaster. It took Hudson only three batters to give up a 3-run homer that statistically and simultaneously was a blown-save and later a loss when his team could not at least tie the game.

Fingers were getting pointed everywhere as often happens when a sports disaster strikes, and fine, point fingers, but don’t cross the line into hate like some ignoramus who has never lived through a tough loss in sports before.

“He’s tinkering around with his mechanics but we got to figure it out,” manager Dave Martinez said regarding Doolittle’s issues. “Moving forward, we need Doo to be right and hopefully we can get him right sooner rather than later.”

We will see how the situation is handled. Stephen Strasburg will make his 2020 debut after a bout with nerve impingement in his wrist/hand on the arm he throws with. The World Series MVP’s warmup for this start was 32-pitches four days ago. Erick Fedde might just be his backup today as we discussed a few days ago when we pondered this situation when the Nationals did not name a starter for Sunday and left it as TBD.

This is a salvage game in this series and a chance to look forward if the Nats can grab a W today in this 12:35 pm early start time.  The Orioles start Asher Wojciechowski in this game.

The scene is set with runners on 2nd and 1st with one out in the top of the 6th inning of this suspended game. Sam Freeman was pitching and now he is on the 10-day IL so you have an anomaly that he cannot even finish his inning. Clearly another pitcher will have to begin this suspended game. 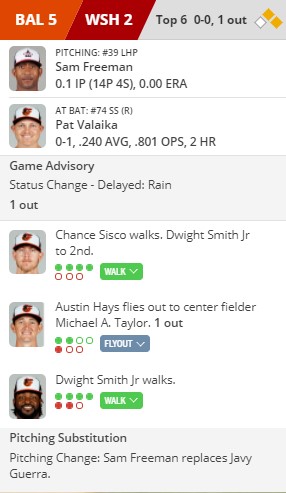 Baltimore Orioles vs. Washington Nationals
Stadium: Game has been moved from Nationals Park, Washington, D.C. to Orioles Park at Camden Yards for the remained of the suspended portion of the game
1st Pitch:  5:05 suspended game continuation
TV: MASN; MASN2, MLB App out-of-market
Nats Radio: 106.7 The Fan and via the MLB app

As noted, no Victor Robles and no Howie Kendrick (day game after night game):

Time to get our Grinch on. pic.twitter.com/jz5zalryoB