The storm that ended the game after the 5th inning wasn’t the only thing that ruined the day; Photo by Sol Tucker for TalkNats

The Nationals posted their Opening Day roster at 2:24 PM EDT. They were the last team to post, and before their tweet came the bombshell Tweet from Jeff Passan about Juan Soto testing positive for COVID which came out at 2:19 PM EDT.

But I knew something was wrong before the Passan tweet. I sat on the story because my source went with this provision “if it’s off the record I’ll spill” was his exact message followed by these words that sunk my sleep deprived body into a dark hole “soto tested positive for COVID this morning“.

It cut me like a knife. I had not slept a wink as I was trying to break news all night on who was making the roster. We already had Sam Freeman, Emilio Bonifacio, Javy Guerra, Wilmer Difo and Carter Kieboom as in. But we didn’t have Soto as “out”. It was a crushing blow on the day — on Opening Day. You could feel the change. It was a gut punch that sucks all the air out of you.

Here I had the Soto news, and I asked around the Nats to see what I could find. Then I had something when the response I got was “where did you get that from?” We never thought that Passan would “out” Soto like that. We figured we would see Soto to the 10-day IL not to see the his medical record put out there like that. No player has been outed involuntarily for COVID until Passan tweeted. At 2:11 PM EDT and 13 minutes before Passan, this was our tweet that would explain the panic inside Nats Park:

Well it was not a rumor. It was fact. The Nats were retesting Soto with a rapid saliva and nasal test and both came back negative. The team tested everyone from players to coaches to staff. Rapid testing is part of MLB’s protocol. Remember, the primary source of testing is the every other day test that is being shipped to labs in Utah or at Rutgers University. You can’t put out a roster until you know what you are dealing with. MLB was aware of what was going on. Who knows where Passan got his information from.

But there was a failure when Passan outed Soto. MLB wanted to protect the players. This was protected medical information that would only be exposed if the player put it out there like Freddie Freeman. General Manager Mike Rizzo had no choice but to respond and confirm Passan’s report, but there is more to it than that. The team’s thinking was that maybe Soto’s test had been a false positive. My tired brain was working overtime and thinking conspiracy theory went to “tampering”.

Soto was showing no symptoms of COVID-19 and contact tracing and Soto’s timeline revealed he had been going to the stadium to his apartment in a regular routine even on the road game in Baltimore. Source told us he did not stray away, but lives in a high-rise apartment and that was the only concern that high-rise apartments have hundreds of people in one building. A tainted railing is enough to pass COVID to an unsuspected person. Even a person following precautions can catch COVID by making a move of habit and pushing that elevator button with a finger that rubs up against an exposed part of the body that was not cleaned right away. But was it a false positive? What did contact tracing reveal?

“We are casting a wide net, and at this point, there’s nobody else that’s ineligible because of the contact tracing,” Rizzo said.

Contact tracing might have been the only good news on the day along with Adam Eaton‘s booming home run that saved the Nats from total humiliation in the 5.1 inning game of which Eaton accounted for the only hit and only run. Could you imagine the headlines if that didn’t happen and it was a no-hitter?

Where do we go from here? If it was determined that Soto’s test was incorrectly read or tainted. The new tests must show two negatives over a span of at least 24 hours apart to meet the MLB protocol. Fortunately, the DC Government made an exception to their 14-day rule to allow the Nats to follow MLB’s testing guidelines and back-to-play protocol. In theory, Soto could return on Saturday if two negative tests came back in time.

“We’re following the MLB protocol and the CDC protocol,” Rizzo said. “Next man up. Let’s go. We’ve got to make our roster move. We’ve got to contact everybody we’ve got to contact. Of course, our first priority is to take care of Juan and his family, and then we go into baseball mode. We make roster moves. We make lineup changes, and we make strategic changes with the Major League manager and the coaching staff. I think you have to take a business-as-usual approach to it, just like any other injury during the season. I think that’s really the way we attacked it this morning.”

The day was supposed to be a celebration of the 2019 World Champs. With ESPN covering the game, commercial time to ring their cash registers took precedence. They cut the flag raising of the World Series flag short to go to commercial, and we never got to see the pennant raised that would fly on top of the scoreboard to form a quartet with the Washington Senators’ 1924, 1925 and 1933 pennants. ESPN had not come back from commercial break to show the pennant raised. 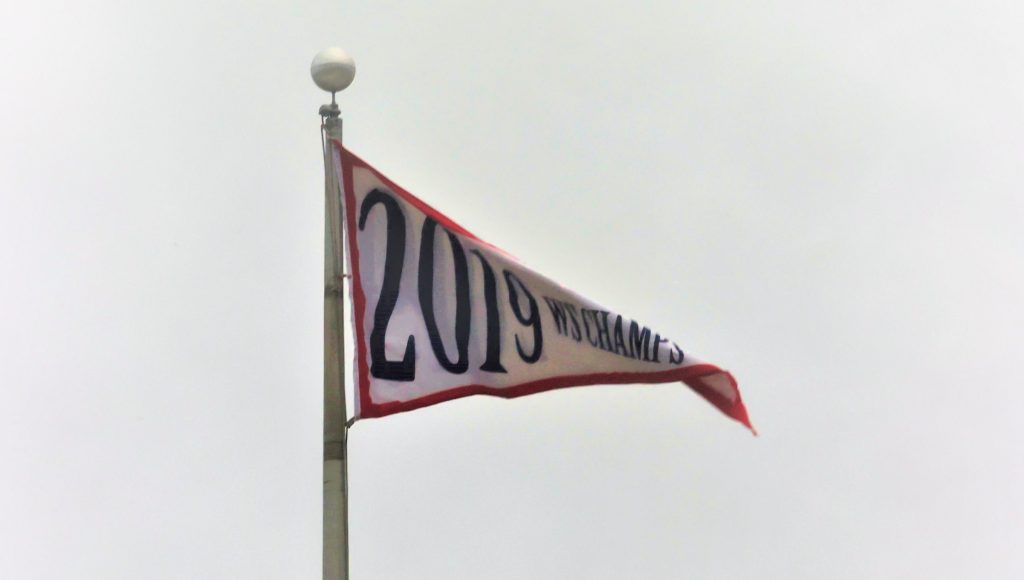 The commentary from Alex Rodriguez on the mic for ESPN was as bad as it gets unless you were a Yankees fan tuning in. Most Nats fans tuned out. Max Scherzer threw a HR Derby fastball to Giancarlo Stanton which almost put a hole in the back wall of the Budweiser Brew House over the Red Porch seats. It was just the icing on the cake. Then the rains came in and saved us from the rest of the misery as incompetent homeplate umpire Angel Hernandez called the game with Yankees on 3rd and 1st base at the 5 1/3 inning mark at a final score of 4-1.

You try to come up with some positive spin on a day that you would rather forget. Right, why dwell on the past. Look forward and move on.