Game #1 Opening Day with pomp and circumstance, flags raised, crowns, Fauci on the mound, and gold all around! Bad news, Juan Soto moved to the COVID List 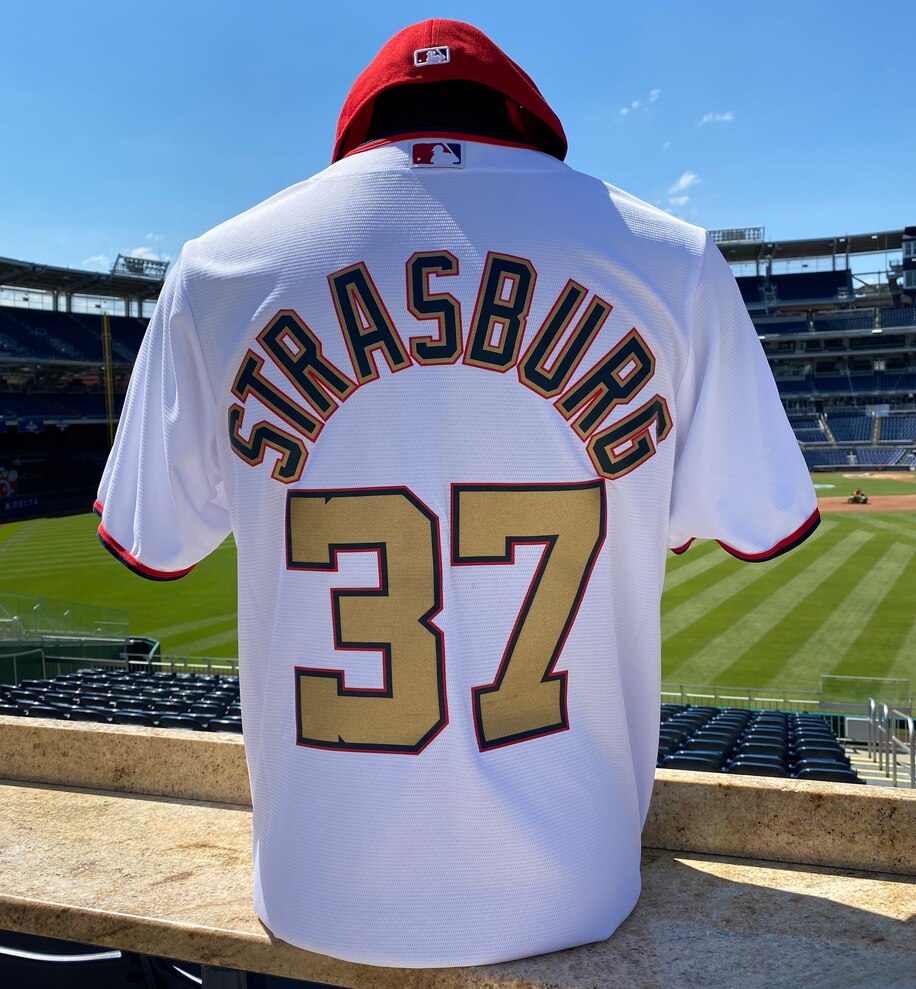 Before today’s Opening Day game that gets started at at 7:08 p.m. ET on ESPN against the Yankees, there will be some special pomp and circumstance. Along with that, this game will mark the first major American sport (MLB, NFL, NBA, NHL) to play a regular season game since COVID-19 sent the U.S. into a national emergency.

“It’s an honor to be the first game being played this season,” manager Dave Martinez said.

The Washington Nationals will raise their World Series champion flag in the centerfield plaza for their well-earned 2019 triumph as well as the 2019 division pennant for playing in the World Series. That pennant flag will fly on top of the scoreboard to form a quartet with the Washington Senators’ 1924, 1925 and 1933 pennants. Also, the team is adorning the players and coaches in the gold threaded “champions” jerseys which now have a fifteen year history to honor the World Series champs from the prior season. The ceremonial first pitch will be thrown by the head of NIAID, Dr. Anthony Fauci, who has pledged his allegiance previously as a Nats fan from New York City. Social justice and Nationals star, Sean Doolittle, will catch that ceremonial first pitch. This is all part of honoring and memorializing the frontline heroes of COVID-19.

One factor that will be inspirational to some, and controversial to others, is whether players kneel during the Star Spangled Banner in support of the Black Lives Matter movement. The Nats announced yesterday that “in conjunction with Major League Baseball,” they “stand with the Black Lives Matter movement ” and MLB will utilize the platform and national stage of Opening Day to express support for the fight against systemic racism and injustice. There will be visual symbolism that will include a BLM logo on the mound, and a black heart with “D.C.” in the middle painted in the centerfield grass. Players can wear BLM wristbands, write messages on their cleats, plus wear Black Lives Matter shirts for batting practice. Players will have the option to wear one of two social change jersey sleeve patches: “Black Lives Matter” or “United For Change.”  By the way, the anthem will be in a pre-recorded format sung by the very popular D.C. Washington.

D.C. Mayor Muriel Bowser will perform the ceremonial “Play ball!” call and all of that takes place before first pitch at 7:08 PM on the ESPN national broadcast.

The starting pitchers are a marquee matchup between Max Scherzer and Gerrit Cole who were supposed to have faced each other in Game 5 of the World Series before Scherzer was scratched with a neck injury. Of course, Cole headed to free agency and cashed in on the largest free agent contract ever for a pitcher and surpassed Stephen Strasburg‘s deal as well as Max Scherzer‘s $210 million deal which was the highest ever for a right-hander. There will be over half a billion dollars on that mound.

If you follow Fangraphs, here is the final standings projections: 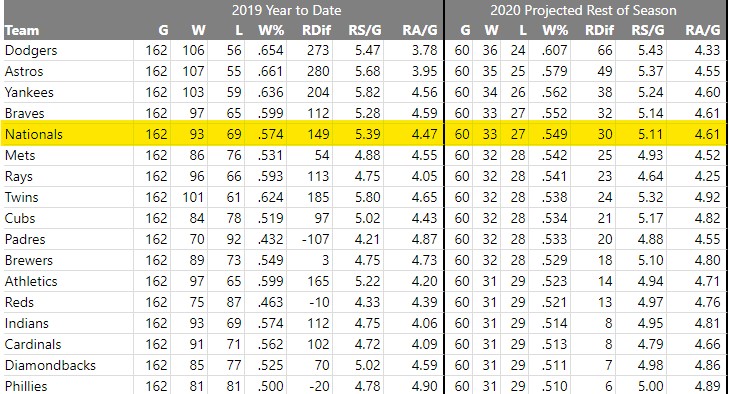 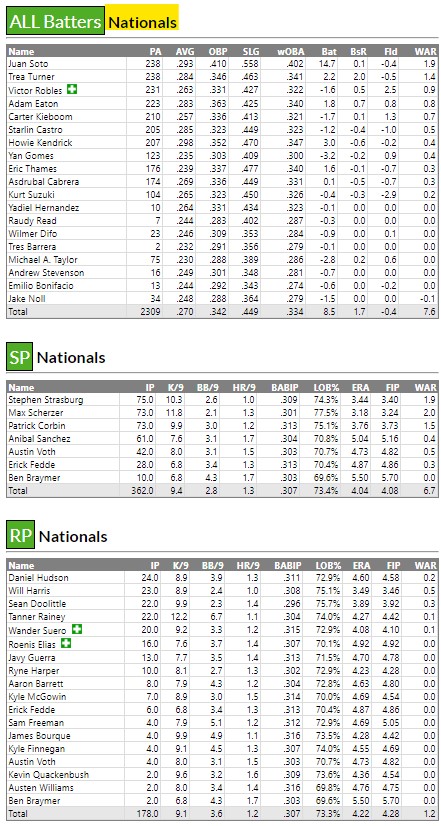 On a small scale, but also significant, Howie Kendrick will also become the first National League player in a home park to DH in a regular season game which might not be a big deal in comparison to Ron Blomberg becoming the first player to DH in MLB history.

For the stats people, a 60-game season translates to a 162-game season by a multiplier of 2.7X. A 20 home run season would be the extrapolation of 54 homers in a full-season. One win or one loss is like the equivalent of winning or losing a series in a full 162 game season. It gives a whole new meaning to “Go 1-0 today”.

In other baseball news, the negotiations on expanded playoffs will come down to the wire. The discussions between the MLBPA and commissioner Rob Manfred will continue. Owners wanted a 16-team playoff scenario instead of the current 10-team mix.

On a large scale, no fans will be allowed to attend the game due to COVID-19 restrictions, and for now, this is the case across baseball. You will hear piped in sound, chants, and cheers. Some of the cheers will have familiar voices as TalkNats’ own Laura Peebles was part of a ZOOM recording with the Nats yesterday, and she said, “It went well.  We recorded general cheering, HOWIE! HOWIE! HOWIE!, N-A-T-S (for one, two and three runs), “Let’s Go So-to, clap, clap, clap-clap-clap” and 10-second personal thanks to the 2019 players and/or wishes for 2020.”

LegNats added about the Zoom, “The recording was organized by Maribel from the Nat’s organization. She had about 25 of us on the Zoom call. First she had us cheer “Go Nats” and go crazy for about 30 seconds. Then she had us do a “Doooooooo” cheer, followed by a “Soto“ and a “Howie” cheer. Then we did the N A T S cheer for each run. (4 separate cheers.)  Finally, each one of us got to personally thank the Nats players and organization which was really cool. The tech team will synchronize and edit the recording. She said they’ll be playing [some of this during Opening Day].”

From MASN’s Dan Kolko, “For those curious how our MASN broadcasts will work during this shortened, bizarre season: All of our shows (the game broadcasts with Bob, F.P.  & Alex as well as our pre/postgame shows with Bo Porter & myself) will be from Nats Park. Even when the Nats are on the road in Philly, NY, etc.”

The Nationals also announced giveaways for Opening Day with special food and beverage partners.  One of those partners is Buffalo Wild Wings who have hired three well-known beer vendors from Nats Park. Perry Hahn aka “RoboVendor,” Clarence Haskett aka “Fancy Clancy” and Todd Georgelas will be serving them up at the BWW in the Navy Yard blocks from the ballpark. Hahn, a mechanical engineer turned beer vendor, is best known for his unique contraption for speedily opening and pouring beers. Arguably the most entertaining vendor of the bunch is Haskett, he’s been serving beers for over three decades with his signature move – backbend over a railing – and tagline – “If you want it served fancy, get it from Clancy.” Georgelas is a seasoned vet in his own right, having kept Washington fans hydrated for over 10 years.  To keep the sounds of the game alive, B-Dubs hired Washington’s organist, Matthew Van Hoose, who will be bringing his talents and the real-deal organ to BWW on Opening Day.

If you live in a zip code in the DC area, you might be able to get the gameday experience delivered to you with ballpark fare, team merchandise and game used items. It is all available on the new app: https://nationals.tryhungry.com/choose-items

We were told yesterday that relievers Roenis Elias and Wander Suero who are both on the 10-day IL will not be activated today for the game and they will rehab at the Alternate Training Site in Fredericksburg, Virginia. From the non-roster invitees, three will make the Opening Day roster including Javy Guerra, Sam Freeman and Emilio Bonifacio. That brings the 40-man roster to 39 players now. Bonifacio has not played in the Majors for over three years with his last game on May 31, 2017. With Ryan Zimmerman off of the roster, it is Bonifacio who now has the longest (non-consecutive) time with the Nats dating back to the 2008 season.

The Opening Day expanded roster of 30-players will be sent to the league office before noon today. Clearly, we know there are about 26 locks, and Davey Martinez said he had 28 locks in his roster.

The rotation is basically set, and the fifth starter looks to be Austin Voth over Erick Fedde, but both probably get skipped in the first time through the rotation and won’t be needed until August 1st in Miami if there are no rainouts before then.

Take your pick of  right-handers Aaron Barrett, James Bourque,  Kyle Finnegan, Ryne Harper, and Kevin Quackenbush  for the final bullpen spots. Of course, two spots are temporary “holding” spots until Elias and Suero are activated from the 10-day IL.

The debate will continue as to who the starting third baseman will be. Whoever starts on Opening Day is not necessarily the player who is the presumptive third baseman. We believe Carter Kieboom is a lock for the Opening Day roster from all reports as of this writing through sources, but we all know what happened in 2012 when John Lannan was announced as the 5th starter by Davey Johnson and two days later it was Ross Detwiler who got the spot over Lannan, and he was shipped to Syracuse.

The bench will certainly be a lock for the first 5 spots. The rest is a toss-up between Andrew Stevenson and Jake Noll who are on the 40-man roster and of course the roster could also carry a third catcher for a while with both Raudy Read and Tres Barrera on the 40-man.

Maybe Davey Martinez goes with 9 bullpen arms and 7 bench players to carry that third catcher or an extra outfielder or power bat. We will know in the next 12 hours.

Here is the official Opening Day roster: Juan Soto is not on the roster and the rumor mill says he tested positive for COVID-19 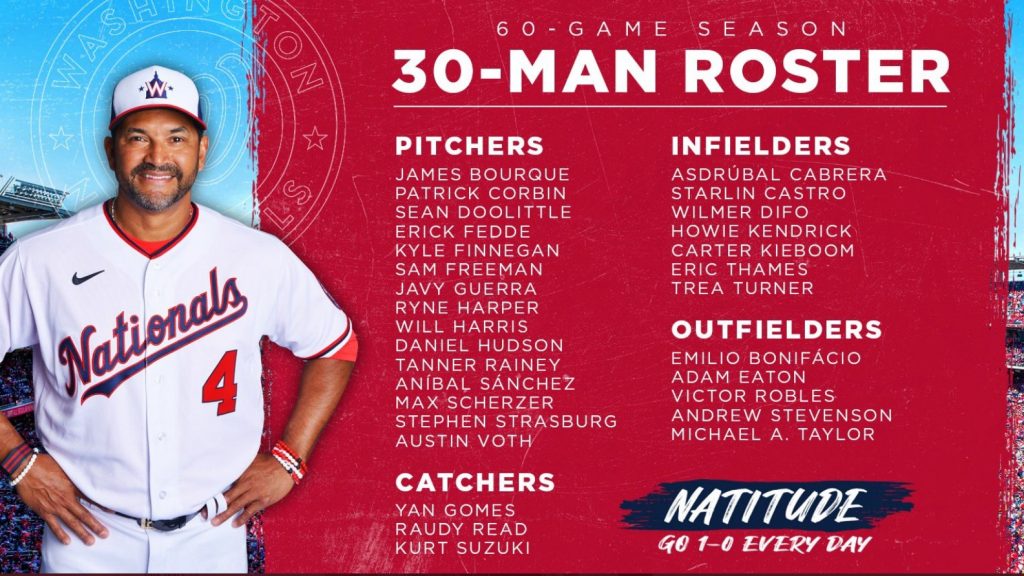 Lineup for tonight and indeed, Robles is starting in CF: