Gold trimmed Nats jerseys are no longer a secret! 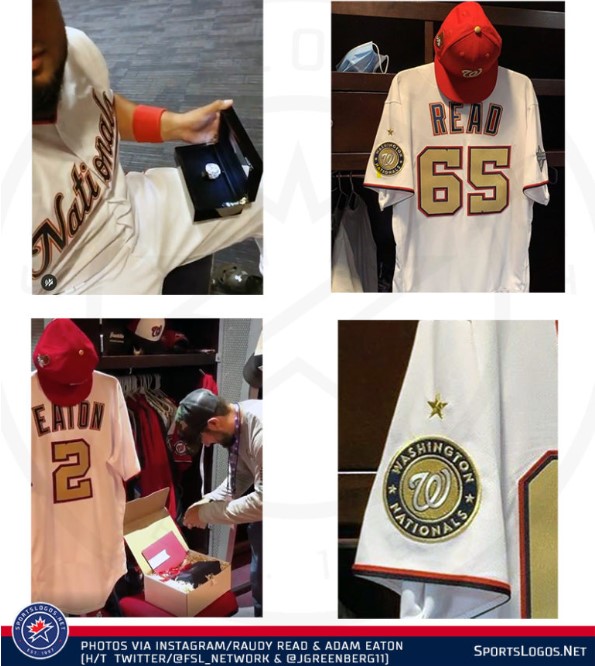 The Washington Nationals “champions” jerseys were on full display on social media last week as players showed us their World Series rings. Neatly hung at each locker was a “champions” jersey which caught the eyes of studious onlookers. These jerseys are set to debut on Opening Night on July 23.

Of course SportsLogos.net was hot on the trail to get out photos as well as Paul Lukas at Uni-Watch. Click on their links so you can read what has been said by the experts and both seem to agree that teams do this by choice and not an MLB mandate, although it has become tradition to wear a jersey with gold trim as the World Series champs. While nothing is official, the jerseys include gold patches and gold stars on the sleeves.

These Nats jerseys have familiar number fonts and the letters in blue and red with the circle patch with gold trim reminds me of the original road uni and similarities to the home uni from the inaugural 2005 season to 2010.

Game used collectors covet those original 2005 vintage first year uni’s now that the Nationals are no longer the lovable losers as they are now lovable winners and if the Nats auction off these “champions” jerseys they will be the first of the Nike branded jerseys to hit the market in demand by the game used fans as well as anyone who wants to don the gold!

The plan is we are told that the Nationals team store will be taking pre-orders next week as well as walk-in sales on Opening Day for the jerseys and the caps. The jerseys will be available in kids and adult sizes for replicas as well as the authentics which is as close as you will get to the jerseys worn on the field. Expect them also after Thursday for delivery from the MLB Shop.