Source: Nats play it by the rules; There was no circumventing DC’s strict rules! 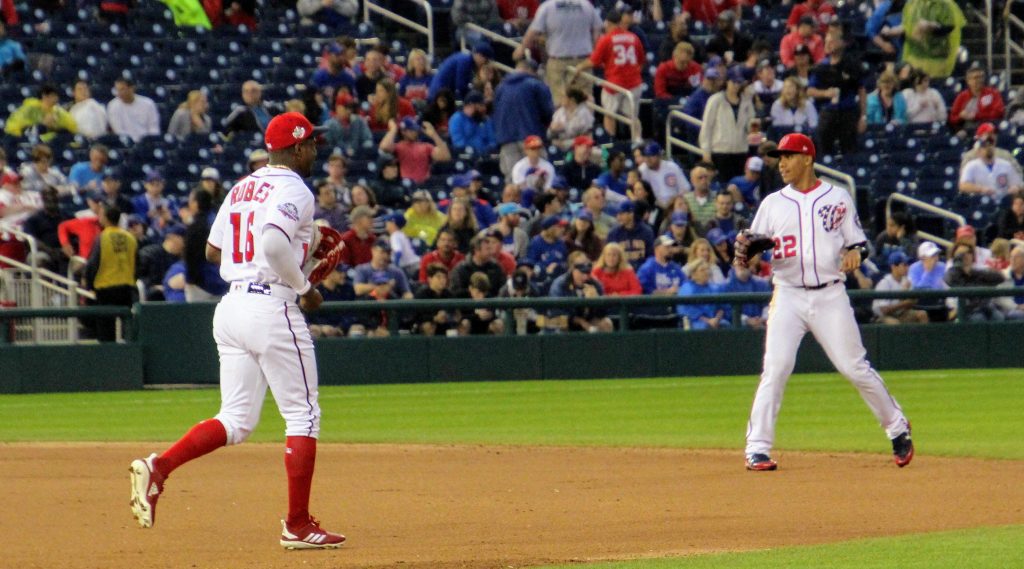 Soto and Robles; Photo by Marlene Koenig for TalkNats

These two youngsters from the Dominican Republic always seemed joined at the hip, but apparently that is not the case based on contact tracing for the infectious COVID-19 virus. Yes, Juan Soto, Victor Robles, and top prospect Luis Garcia all came in contact with a COVID-positive person on July 1st we were told by a source who wishes to remain anonymous. But Robles as we reported earlier yesterday had an additional contact, and we have learned that occurred on July 3rd. The Nats played by the rules set by the D.C. Government which is among the strictest in the country, and much more unyielding than the MLB rules that would allow a player to return after two consecutive negative COVID tests.

There was some confusion when Soto, Garcia, and Howie Kendrick were told self-isolation would end on Wednesday. In the counting of days, Wednesday was actually the last day of isolation and they could return “to work” on the 15th day.

Source: Best laid plans could be delayed again with some of the players on self-isolation. Soto is waiting to be cleared for today but looks like Robles might be pushed back to Saturday now.

We have had bits and pieces of the story on the self-isolation since last week, and what emerged was that the D.C. Government rules which were the most stringent took precedence. That was an important piece of this puzzle, but the contact tracing was also a key as the 15-day clock to return to work does not begin until day of last contact. Robles’ last day of contact was on July 3 + 15 days allows him to return to work on July 18 and that is tomorrow.

In the rumor mill, we learned from a Twitter follower was that some believed that Robles and the boys were out “partying”. I asked, “Where did you hear that from?” She showed me a photo of the boys in an Instagram photo. A mutual friend of Robles and Soto had posted up an old photo that possibly had some photoshopping of a World Series ring. Since Soto and Robles reportedly received their World Series rings on July 9th, people assumed the photo was “new” with this friend wearing one of their rings. You can see from a photo our photographer took of Soto last night that his hair is shorter on top and longer on the sides.

Now look at Juan Soto’s hair in this photo versus the one above. Top shorter & sides longer! Some people thought that Soto & Victor Robles were not self-isolating and were partying. #FakeNews That’s an old picture and that ring might have been photoshopped to make it look new. pic.twitter.com/Td2raGye5E

Yes, some good detective work to almost conclusively prove that the “group” photo was old and possibly photoshopped. But we went further than that and asked the question as to whether these players ever left the self-isolation to maybe get dinner, grab a lunch, go to a batting cage in another locale (Virginia/Maryland), and the answer we received back was an emphatic “NO!”. We were told by more than one source that Soto and Robles never left their apartments.

D.C. sports news has been tabloid quality this week with so many false reports and some true ones on claims of sexual harassment with Washington’s football team. But with the regards to the Nats, they played it by the rules, and we want to set the record straight that to the best of our knowledge from the reports we received that the players did also.

The rumors that Soto tested “positive” was also #FakeNews, and we were told by a source that Soto was aware that some were saying that. The source said he was not pleased about that. We were told by a source who the players came in contact with, and there is nothing to be gained by “outing” people. Fortunately there was no further known spreading of COVID-19 to other players. Wander Suero and Roenis Elias remain in quarantine and are on the 10-day IL. You can come to your own conclusions on them. In addition, Joan Adon and Steven Fuentes have been cleared to practice at the Alternate Training Site in Fredericksburg, Virginia, the Single-A affiliate of the Washington Nationals. Technically those players could have returned earlier since Virginia’s rules on COVID is less stringent than D.C., but the Nats followed the D.C. protocol with them.

Manager Dave Martinez welcomed his new players back with virtual hugs as he safe-distanced and came up with an idea to welcome back Soto, Garcia and Kendrick with a photo montage on the clubhouse TV screens and the words, “Welcome back.”

“I want them to feel welcome, and I want the guys to know they’re coming to join us to play these games in difficult times in life, and they’re ready,” Martinez said.

“When [Robles] gets here, I’ll put a nice picture of him on the TV welcoming him back too.”

Martinez wasted no time and had Soto and Kendrick in the Summer Camp starting lineups in Thursday’s intrasquad scrimmage. It was almost mind-boggling what Kendrick did in his first at-bat. He singled into centerfield off of his teammate, Patrick Corbin, and Soto shook off his rust with a line drive over the leaping Trea Turner against reliever Ryne Harper.

“Right now, my swing feels really good,” Soto said. “I was seeing the ball really well today in the games, and I think we’re going to be good. The only thing is, just try to keep my body in shape.”

Opening Day is just six days away against the New York Yankees. D.C. law could be a problem for the Yankees and any team playing in the District. Once a visiting player enters the stadium, they are technically a “worker” and subject to D.C.’s rules on COVID. That could pose a problem for any player who has not been in self-isolation for at least 14-days after last contact. Rumors are swirling that the Nationals might have to consider playing games outside of Washington, D.C. That is to be determined.

There has to be financial incentive and some homefield advantage playing in Nats Park. It seems the City of Los Angeles might have the same COVID restrictions for visiting players. That could be an advantage to the home team. In addition, sponsors are paying for signage to be seen on TV. In fact, at Nats Park last night you could see the vinyl signage draped over outfield sections with large logos for PNC Bank and Toyota and other sponsors. You hope the Nats have a “Hit Here” promotion for any home runs that hit those signs for home runs.

One more great quote from Soto on how it felt to get back to his teammates.

“It was nice,” Soto said. “I just feel back at home, back with my team, and we’re the World Champions.”

The last thought is how hard our people work at getting you the news and being accurate with it. For almost a week we have been on top of the whereabouts of the missing key Nats players. Our in-house photographer, Sol Tucker, has been capturing exclusive photos to tell a lot of the story from Fredericksburg to Nationals Park which we have posted on the TalkNats Twitter. Thanks to everyone who contributed to our work on these articles and our social media and especially our sources who have entrusted us with this information.