UPDATED: Game #1 of the Summer Camp exhibitions; Phillies at Nats Park; MLB.com for TV; Victor Robles is in the stadium! 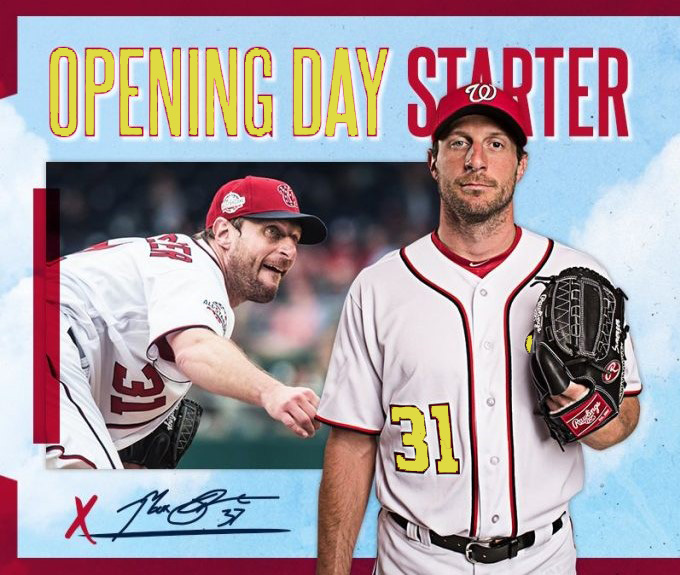 With Max Scherzer starting in today’s exhibition game against the Phillies, it lines him up perfectly for Opening Day on Thursday against the NY Yankees. So yes, as ESPN had hoped, it looks like Gerrit Cole and Scherzer in primetime on July 23. First things first, the Nats have a tune-up game at 6:05 pm in Nats Park against the Phillies. As we reported earlier, because this exhibition is considered a “game” as defined in the MASN agreement, the Nationals can not stream it on video (unless they get a waiver from MASN or MLB). The Nats were able to do streaming broadcasts the past two nights because those were intrasquad practice games. MASN will not air this game, but you will have Charlie & Dave on 106.7 FM radio.

It was reported by Jesse Dougherty that MASN would not be doing any of the Nats exhibition games which total three in all. With no official statement on any of this, MLB.TV’s schedule shows MASN will broadcast the Nats at Orioles on Monday and Orioles at Nats on Tuesday. The sad part is that on the MLB.TV schedule, the only games not on TV going forward is tonight’s Nats game and two Reds home exhibition games. Every other fan can watch live content of their teams. Once again, Nationals fans are short-changed by MASN who would rather show re-runs then provide content that they have exclusive control of the rights to for their customers who pay cable fees.

The other “wait and see” for today is whether Victor Robles (updated below) reports as the lone Nats starter who has been in self-isolation for over two weeks now. As we reported on Twitter two days ago, Robles would be eligible to return to work today, but with D.C. and the Nats reportedly agreeing to new procedures, technically Robles could have returned yesterday but did not. Today would be his 15th day since he came in contact with a COVID positive person. Down south, Freddie Freeman returned yesterday and a mere 13-days after his wife was eliciting prayers for him as he was very ill. Clearly, other teams are operating under much different rules, and that has been a competitive disadvantage for the Nats who just got Juan Soto and Howie Kendrick back two days ago.

This man tested positive for COVID with symptoms and has made it back on the field before Victor Robles who did not have COVID according to sources. This is where the Nats had been at a competitive disadvantage. https://t.co/xycgSWRDLe

We will load more content later as we have line-ups.

A change for tonight, MLB is now listing https://t.co/DJtLyf19Em for TV for tonight’s Phillies and Nats game. Stay tuned. pic.twitter.com/6bKacir1bH

After over 14-days of self-isolation, Victor Robles is inside Nationals Park. The plan according to our source is to get him ready to start on Monday against the Baltimore Orioles.

A source told us the last time he swung a bat was in the Dominican Republic on June 29. That is a day short of three weeks that he has been able to swing at 90 mph fastballs.

Sorry to report that the MLB .com TV broadcast has been taken off the schedule once again for tonight's Phillies/Nats game. pic.twitter.com/pr3eq2pRWO