Analysis: The Washington Nationals World Series windfall was blown away by COVID-19

Every team that surprises the world with a World Series appearance has a huge financial windfall in the following season. Winners get the benefits. It is just the way it is. The Washington Nationals were set to reap the rewards with record crowds this year only to see a pandemic sweep the globe in the form of COVID-19 that shut down life as we know it.

No pattern is exactly the same for how large that windfall would be because some teams maintain good attendance like the Red Sox, Cubs, and Yankees. We decided instead to take a look at the Phillies, Royals, Giants, and Astros for a case study on attendance and what we learned was that no two teams are alike. There is no windfall number you could say would fit the Nationals, but suffice it to say it would have been one of the largest increases since the team’s attendance had dropped from the year before and the 19-31 start to the season created negativity that suppressed the demand for most of the season until a late summer surge as the team was showing signs of life.

Sometimes a team builds a new stadium and gets a bump in attendance or hosts the All-Star game like the Nats did in 2018 and that will spike attendance. Usually sustained winning brings the crowds back, but making it to a World Series is big for any city.

Looking at teams who saw success were analyzing patterns. There was also a pattern for teams that went from winning to sustained losing. When losing returned, there was a slow drop year-over-year and the fourth straight year of losing was usually devastating on their attendance. The San Francisco Giants fourth year would have been this year. The Phillies in 2015 saw their attendance go from sell-outs to less than half full (48%) with a drop of over 100% from 2010 to 2015. The lesson there is don’t have fairweather fans.

For the same reason, while the Phillies were winning for several years, their fans showed up in record numbers making their increase in attendance windfall the smallest at 5.2% while the Royals was the largest at 38.4%. Sustained winning and sustained losing smoothed the curve for teams as you would expect. The Astros seemed more typical at 24% after their World Series in 2017, and the Giants saw an 11.5% increase. The average increase was 19.78% between these four teams. 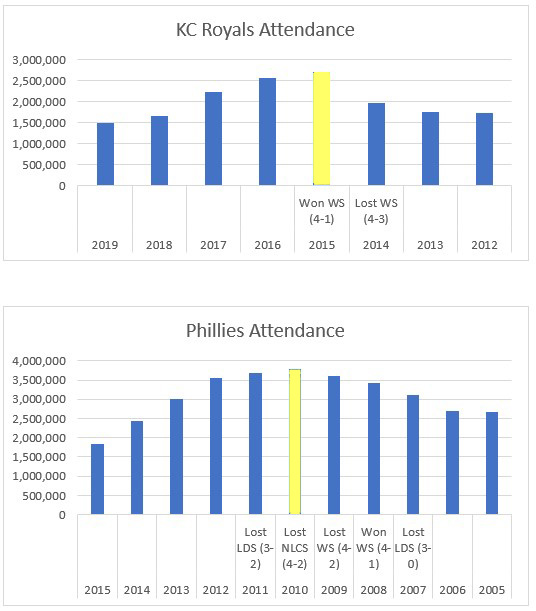 The Nationals attendance in 2019 was 2,259,781 and the team’s high was 2,731,993 set back in 2005. If the Nats saw a surge above that they would have seen attendance grow by more than 20.9% and that seemed to be a certainty for the reigning World Series champs who were at 2,652,422 the year after winning the 2012 NL East crown. Everything was set for sellouts during “Championship Week” only to see those games wiped off of the calendar. That was six games of almost guaranteed sell-outs.

Certainly the Nationals would have seen a spike in attendance by 400,000 over the 2019 season. They could have seen 35,000 on average per game and hit 2.8 million in attendance. What is each fan worth to a team? In the Nationals case more than other teams, it is everything. The Nationals don’t have a stadium naming rights deal and their MASN split for their RSN revenue is the lowest in the majors as a function of payroll. That is the reason we reported from a source last year that the Nationals were headed to a projected loss of between $20 to $30 million unless a miracle happened.

Well, the miracle happened, and there was a surge late in the 2019 season in ticket sales and then the World Series payoff happened and according to Forbes the Nats ended up making a profit of $27 million during a season that some of their baseball brethren made record profits. In all, the Nats ranked eleventh in revenue behind teams like the Astros, Phillies, and Braves and were slightly ahead of the Mets due to the World Series revenue.  Even the small market St. Louis Cardinals soared past the Nats in revenue.

Fangraphs did this handy piece on RSNs but they calculated the Nats RSN money from MASN based on the number awarded in arbitration, and we know that any amount the Nats are paid that the Orioles must be paid the same amount per the original contract with MLB in 2005. If you look at other teams with deals, you will see the disparity based on MSA populations. Washington D.C. is the 6th largest in population, but  № 1 in per capita income. The demographics probably point to the Nats being a top four market after NYC, L.A., and Chicago. Hence, the MASN deal is killing the Nationals franchise over time due to staying revenue competitive with the largest teams. Yes, no team in the National League has spent more on payroll over the last five years than the Nationals which seems great, but the toll was taken when attendance falls. The finality of the MASN lawsuit should come closer to fixing the situation if the Nats are truly paid on fair-market-value, but that remains to be seen.

Chart: Forbes Magazine for all of MLB as to how revenue is paid-out

According to Forbes, the Nationals revenue per ticket sold averages $44.00. Add parking, concessions, and merchandise purchases and conservatively using Forbes standard that it is worth $12.72 per fan. While that sounds incredibly low, we will use their numbers that revenue for each extra fan was worth about $57 to the Nats. A 480,000 increase in 2020 attendance would have been worth $28 million to the bottomline.

When the Blue Jays won the World Series in 1993 their attendance was 4,057,947 and then the strike of 1994 into 1995 happened. The first full year after the strike, the Blue Jays attendance sunk to 2,559,573 then to 1,705,712 just four years later. What effect will this work stoppage hurt overall in baseball? There are so many factors in play here. Time will tell certainly on the future of the game.