The media will be in full force at the World Champion spring training home of the Washington Nationals for the wrong reasons. They are there to cover the Houston Astros cheating scandal on the other side of the FITTEAM Ballpark of the Palm Beaches that they share with the Nats. Sure, the Nats will get more coverage than normal, but this is the time to be happy that “realer” baseball is back as Spring Training camps open around baseball. This pre-season will give us the first glimpses of what this 2020 Nats team will look like plus all of the new faces. Also in the news, the Nats marketing department released the full calendar of promo events which includes the bobblehead releases as usual but this year will have a “Champions Week” to open the home schedule in April!

Also, MLB commissioner Rob Manfred spoke about some of his ideas for the future of baseball. He has spoke about increasing the field of playoff teams from 10-to-14 as well as having the top seeded teams pick who they would like to face. These ideas would need to be part of the next collective bargaining agreement (CBA) with the player’s association. In addition per the discussions, there is also the debate on the designated hitter (DH) being part of the National League. Also discussed is the service time rules, and that will be hotly debated in the next CBA.

No idea who made this new playoff format proposal, but Rob is responsible for releasing it, so I’ll direct this to you, Rob Manfred. Your proposal is absurd for too many reasons to type on twitter and proves you have absolutely no clue about baseball. You’re a joke.

As spring training camp opens tomorrow, we await the official non-roster invitee list which has not been published. We did post up a list last week of several players who will join the players on the 40-man roster.

While Opening Day is almost always a sell-out, this year’s will be even more special as the World Series champions banner will be revealed. In the second home game of the season, the players from the 2019 World Series team will be presented with their World Series rings. You can also expect some special uniforms to be worn on that day and there will be a giant replica World Series trophy on display. The rest of that homestand will include other champions’ promotions.

The home calendar is packed with promotion events including Star Wars and Marvel super hero items. Cat-urday in the park is back this year as well as Father’s Day catch on the field and Yoga in the outfield.

In all, there will be eight bobblehead/figurine giveaways during the 2020 season starting with a Dave Martinez bobblehead during Champions Week. That bobblehead was designed by his girlfriend Tara as we learned during the “Hot Stove” event when they showed it to the crowd. Davey is holding the World Series trophy in this bobblehead. The first Victor Robles bobblehead will be given away on June 3rd. The Nationals will give away 10,000 Trea Turner “The Flash” bobbleheads on Justice League Night (June 5), and 10,000 “Juan Solo” bobbleheads on Star Wars Day (June 20). Before the All-Star break, there is a Stephen Strasburg bobblehead on July 10th and then nothing until Daniel Hudson (Aug. 14) and Max Scherzer‘s Marvel Super Hero Day (Aug. 28). And of course there is a Ryan Zimmerman as “Mr. National” on September 20th near the end of the season which could be his final hurrah. 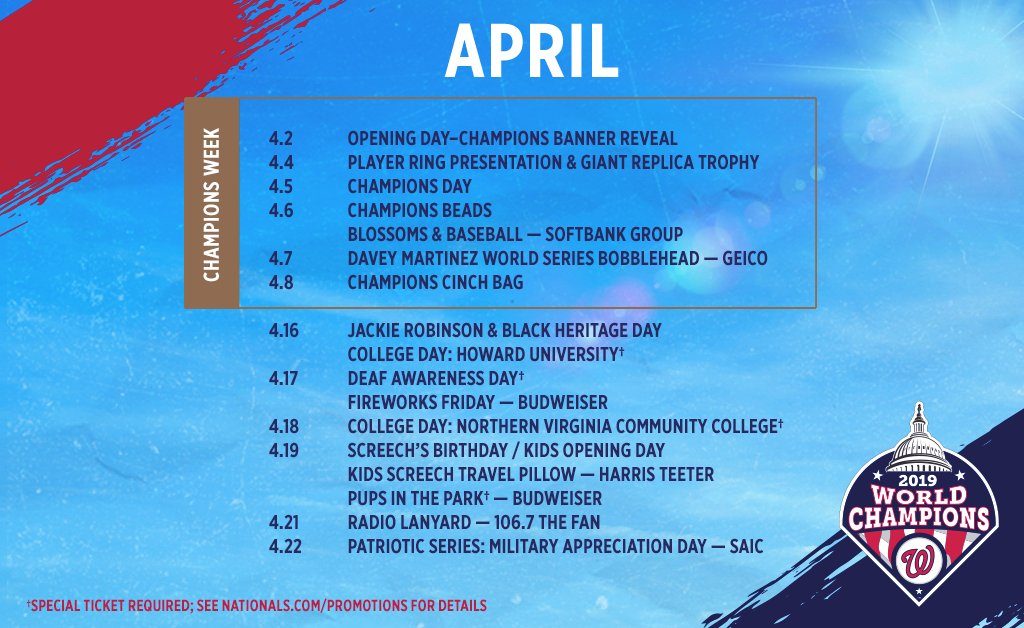 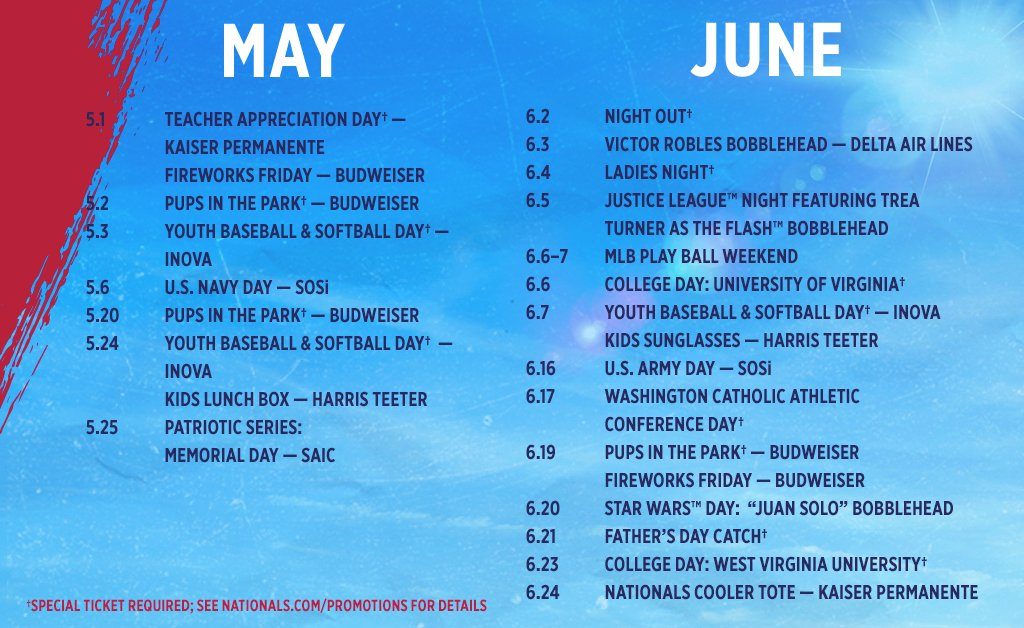 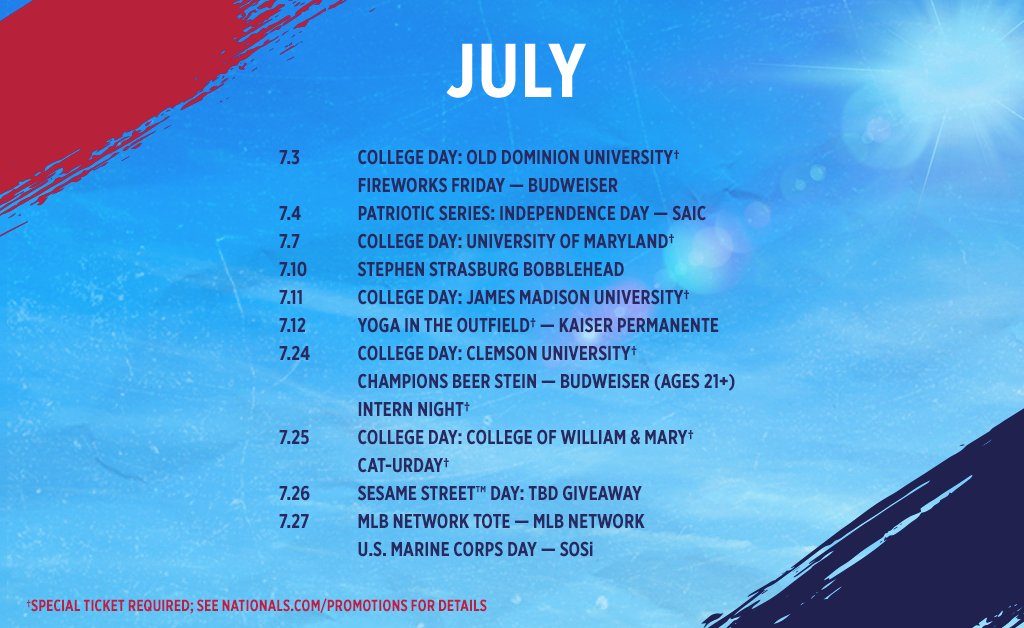 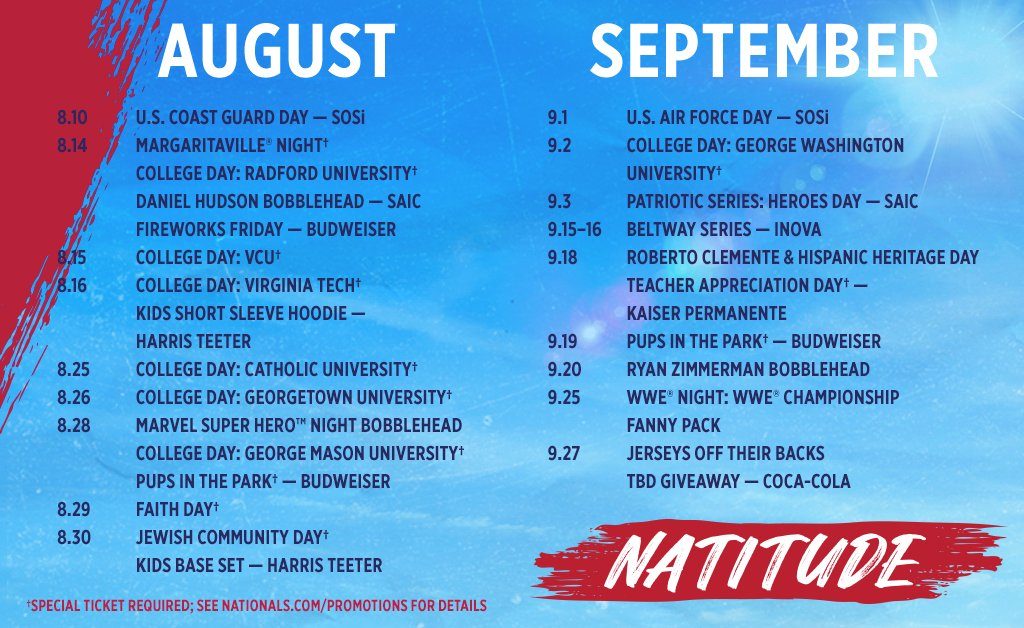 For those wanting single-game tickets for this season, all games go on sale to the general public on February 19th (except Opening Day). The presale for season plan holders begins in two days (February 13th) and for Nationals fan club members on February 18th at 10 a.m. The Nats have not announced when any Opening Day tickets will be available outside of season plan packages.

As we welcome the pitchers and catchers to Spring Training officially tomorrow, start building your virtual calendars because there will be plenty of unofficial events as popular as the Nationals are. For instance, Juan Soto is supposed to have on June 6th in Sterling Virginia an autograph event. With the surge in popularity of this team, expect other appearances, autograph signings, and meet & greets around the DMV. If you know of anything you want to share, post it up!