The Nats open Spring Training camp today; It is all about the pitching! 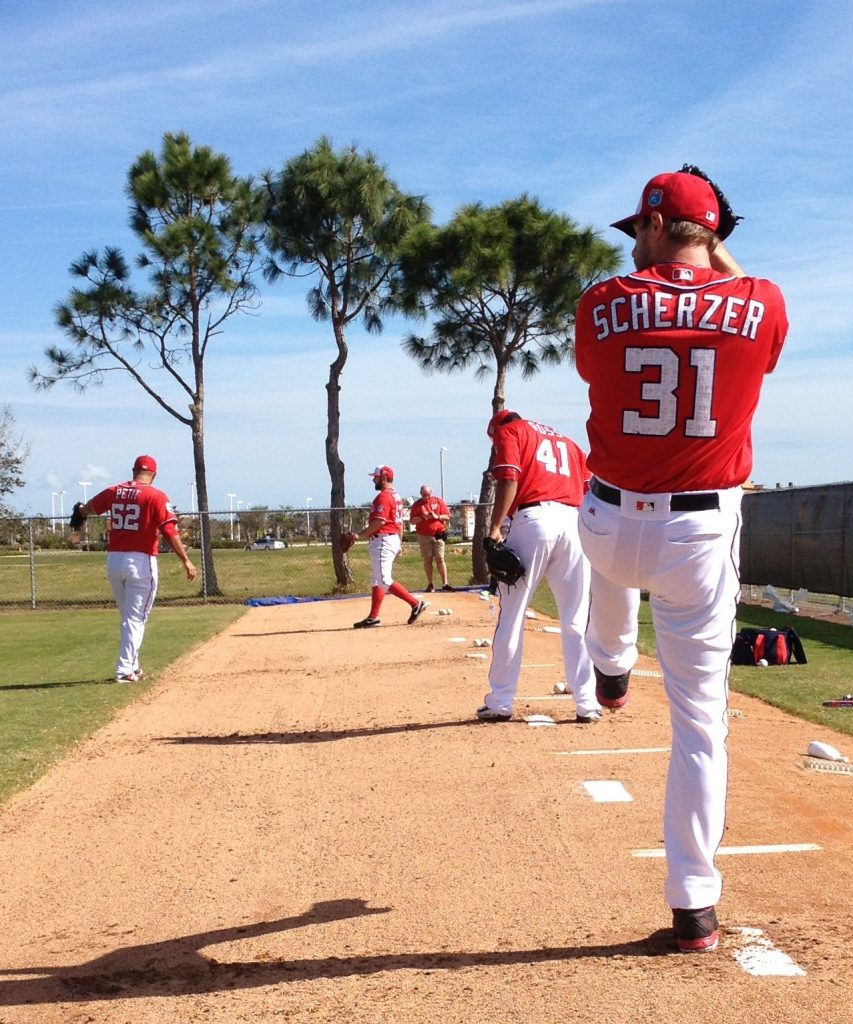 As soon as the World Series parade wrapped up, we were counting down the days until camp opened today for the Washington Nationals at their shared Spring Training facility at the FITTEAM Ballpark of the Palm Beaches in West Palm Beach, Florida. The offseason is over, and the preseason starts with pitchers and catchers reporting first to camp as is the tradition for all teams. The strength of this Nats team is the pitching, and the Nationals are ranked the best in baseball for starters 1-to-4 in the rotation.

“I was taught early in my scouting and G.M. career that once you have starting pitching, anything is possible,” said general manager Mike Rizzo. “And if you don’t have it, nothing is possible.”

“Where the game is going elsewhere, I think [starting] pitching is one of our strengths,’’ outfielder Adam Eaton said. “The organization has really tried to build that starting pitching up. You are seeing what they can do. When you put up a couple runs you feel good about it. We like starting pitching here.’’

This could also be one of the best bullpens the Nats have had in Spring Training. Of course you could debate whether the 2017 bullpen was better with Brandon Kintzler, Ryan Madson, and Sean Doolittle. The common denominator between these comparative bullpens is the closer with Doolittle. He is flanked by World Series hero Daniel Hudson, and Will Harris who pitched in the World Series for the other team last year. This 2020 bullpen seems to have more depth too.

“Starting pitching is absolutely our biggest strength,” Doolittle said. “They absolutely set the tone for this team.”

Doolittle certainly is not humbly deferring compliments on his starting pitching brethren without merit. Rizzo and the Lerner ownership group have made starting pitching an emphasis in where they spend their capital. On a nominal average contract value, Stephen Strasburg ($35 million), Max Scherzer ($30 million), and Patrick Corbin ($23.3 million) are making $88.3 million. In their current deals, that trio along with Anibal Sanchez add up to a commitment of cash that is second to none in baseball history at over $500 million if you include their bonuses and Sanchez’s 2021 option. That number does not even include Strasburg’s previous pay which is over $110 million. He recently signed that über deal for $245 million in the offseason that set a record for right-handers until Gerrit Cole eclipsed that deal days later.

Of course the cash paid for starting pitching this season is about $100 million and did not leave much to spend on the twenty-one other players in order to stay under the CBT cap. Because “ace” starting pitching is so expensive, Eaton is correct that teams have gone away from paying up for loaded starting rotations with expensive free agent pitching.

With the first Spring Training game in just ten days, we will get a look soon on how manager Dave Martinez will set his lineup. Of course that will not be any guarantee of what Opening Day will look like in forty-three days.