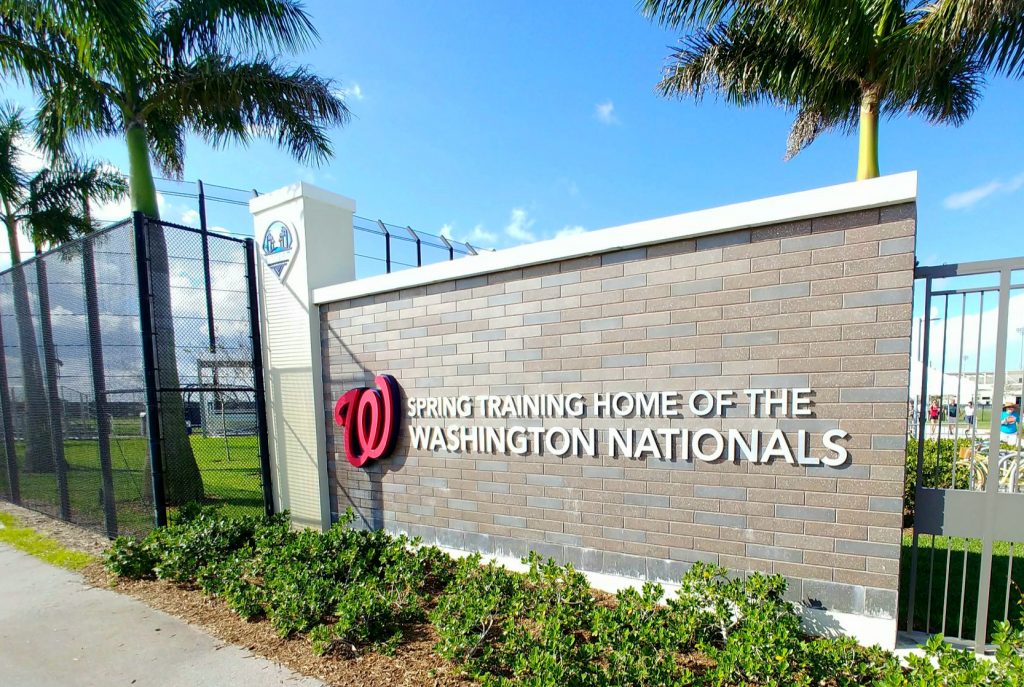 Where will the 2019 World Series champs signage go?

We are just 11 days until Spring Training camp officially opens in West Palm Beach. Several players are moving into their Palm Beach County rental homes on two-month leases. The weather today at the FITTEAM Ballpark of the Palm Beaches is 74°F with rain, and better weather is expected for the Super Bowl tomorrow just an hour down the road in Miami. That is another reason for players to arrive early so they can attend the events. Speaking of championship games, the Nats should be adding “2019 World Series champion” signage to their side of the facility like the Astros have for their 2017 “tainted” win in multiple signage.

General Manager Mike Rizzo and manager Dave Martinez are compiling their invitations for Spring Training. It will include all 40 members of the 40-man roster plus the NRIs (non-roster invitees) who will be alongside the veterans and youngsters hoping to make it. Last year, it was Jake Noll who was the surprise standout and in 2015 it was Clint Robinson.

This year, Rizzo has built depth which will make it difficult for any NRI to make the Opening Day roster. And youngsters like teenager Luis Garcia along with Yadiel Hernandez,  Wil Crowe, and Taylor Gushue can still learn at big league camp, and that is why additional players are added plus veteran minor leaguers who were signed as free agents like World Series champ Javy Guerra. Additionally players like David Hernandez, Emilio Bonifacio, Kevin Quackenbush, Welington Castillo, Tyler Eppler and Mac Williamson will all be NRIs in big league camp according to sources.

Some of the interesting names on that list are Williamson and Yadiel Hernandez. The outfield depth is the thinnest area on the 40-man roster as the Nats only have Juan Soto, Victor Robles, Adam Eaton, Michael A. Taylor and Andrew Stevenson. Stevo is the only pure outfielder with minor league options on the 40-man roster.

From The Athletic’s Ken Rosenthal, he took an AL team’s latest internal projections for how the NL East will shake out and published this:

Will Leitch over at MLB.com posted up his projections also for the NL East (which he corrected after some errors in games played):

Over at Fangraphs, they still have not loaded up their 2020 W/L projections, but their WAR numbers for 2020 have the Nats in the second spot in the NL East trailing the Mets.

The Nats “beat writers” had a change recently. Jamal Collier left MLB.com and moved onto the Chicago Bulls beat in the NBA. Taking Collier’s spot is Jessica Camerato. She was a reporter/producer for MLB Advanced Media before this in Boston where she served in a dual role of reporting responsibilities include covering both the home and away teams as they played each other at Fenway. Being bilingual will be a plus for Nats fans as Camerato can conduct interviews in both Spanish and English.

Camerato did not waste any time jumping in with two feet as she tackled the Inbox to answer some of those burning questions like:

“What are the chances Carter Kieboom lands at third?”
— @KellyKenneally

From a team source, we were told that PNC Bank just re-upped for 5 more years as the top sponsor of the team and the “Official Bank” of the reigning World Champs. Without a stadium naming rights sponsor, the Nats needed a corporation to step up, and PNC put up the cash. They will once again have top billing in signage, best suite in the stadium, premium seats, and special events.

Last night, Patrick Corbin was awarded the Warren Spahn trophy as the best left-handed pitcher in baseball. He joins Gio Gonzalez as the only other Nats pitcher who won the award as a Nats pitcher. 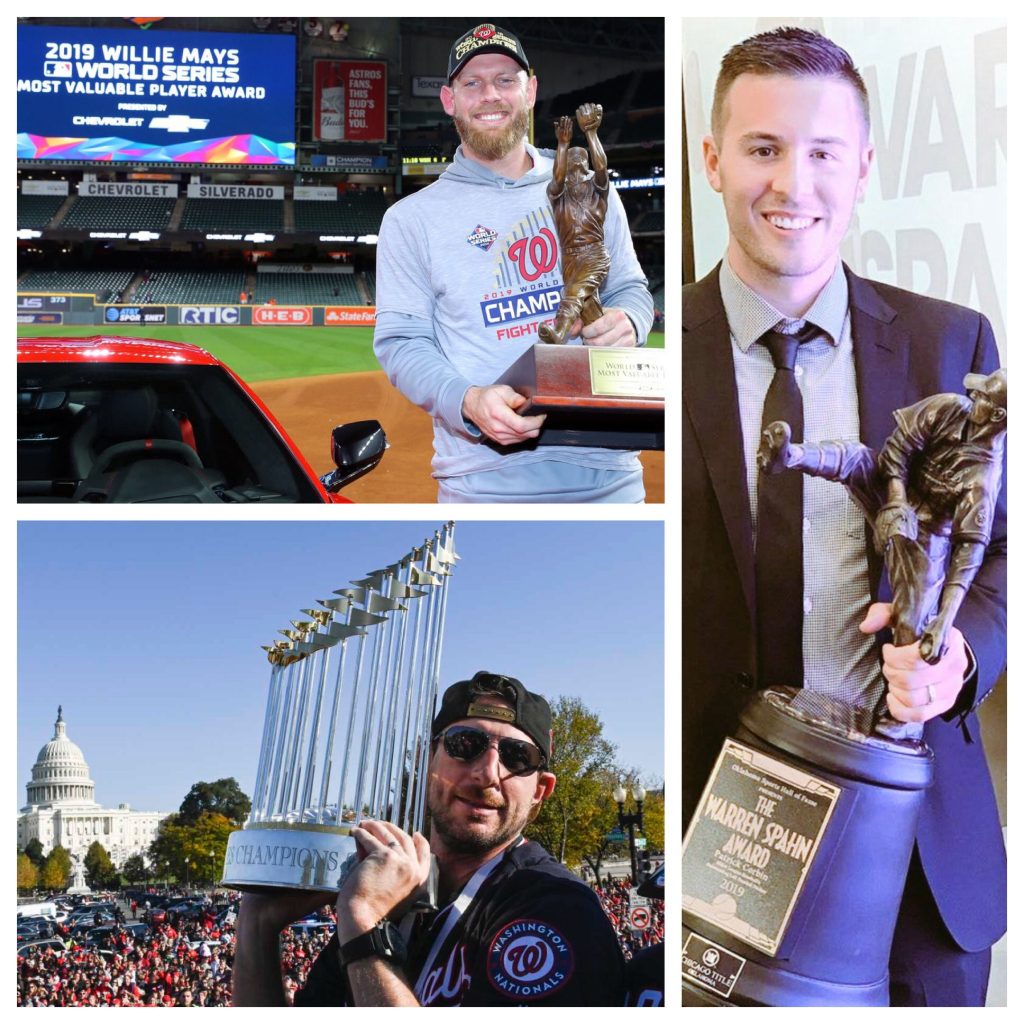 Nats starting pitchers with a haul of the 2019 hardware; Graphic from Tom Sileo via Twitter

After the Nationals traded for Ryne Harper, there was the hope that he would choose jersey No. 34 so fans could pull their Harper jerseys from boxes in the attic. That will be a no-go as Harper won’t go that route he said in an interview even after pleas from fans on his social media.

Maybe don’t take those #34 jerseys out of the closet yet, Nationals fans…@ryneharp | @Nationals | #Nationals pic.twitter.com/LCQBTvhlR8

After the World Series, Mike Rizzo called his soon-to-be 90 year old father, Phil Rizzo, to congratulate him on the Nats big win, and made special mention of what the World Series win would mean for his dad and Ted Lerner who is 94. Mike Rizzo referred to them as his two 90-year-olds. Unfortunately, the elder Rizzo passed away today of an illness. It is with a heavy heart to pass this sad news along. Phil served on the Nationals staff assisting Mike with scouting and sage advice on a part-time basis as a Senior Advisor. He had just turned 90 on November 24th.

Phil Rizzo was a member of the inaugural class (2008) of the Professional Baseball Scouts Hall of Fame and was a key scout for the Diamondbacks in signing Brandon Webb, who won the 2006 National League Cy Young Award and represented Arizona in three All-Star games, as well as signing players such as Mike Matheny, Dick Schofield (uncle of Jayson Werth) and Mark Loretta for other teams.

It is with heavy hearts that the Washington Nationals mourn the passing of Phil Rizzo, the father of Mike Rizzo. pic.twitter.com/8aPZfdvBSU