Analyzing the groups in West Palm Beach and the 1-0 W-factor! 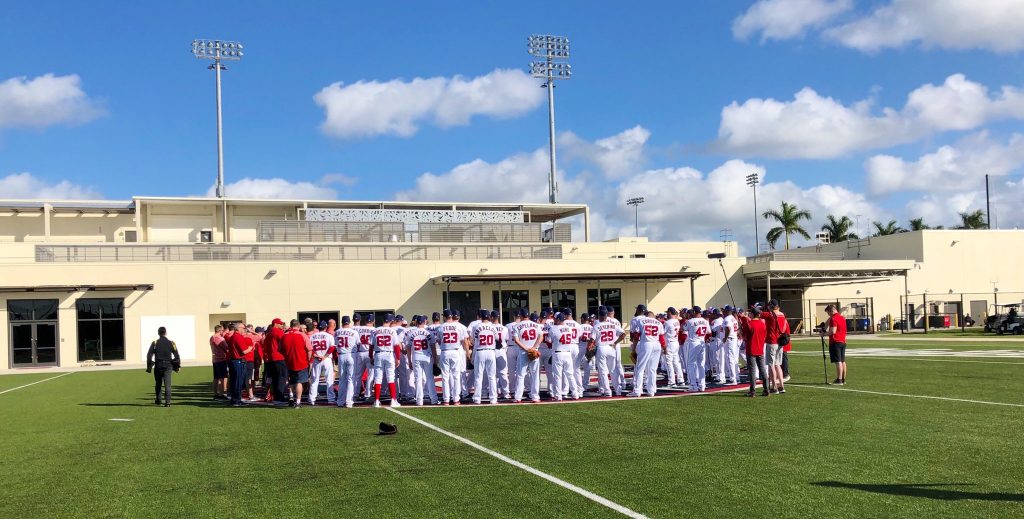 Squad goals are a key to every team, and the Washington Nationals roster as we look at them have strengths and weaknesses as we showed by position — but upside exists. Don’t let the projection sites fool you into thinking this is at best an 88 win team, and by the same notion that 88 wins is a guarantee. We all lived through 2015 as the year of “Where’s My Ring” only to not even make the postseason and then see general manager Mike Rizzo go big in 2016 only to see that team make an early exit the postseason. There are no guarantees in sports. If you saw Bob Nightengale’s tweet where he is ready to hand the World Series trophy to the Dodgers, we all know from 2015 — no guarantees.

First the good news, this could be the best and deepest bullpen that Mike Rizzo has assembled since he acquired the three-headed “Law Firm” for Dusty Baker in 2017. With Will Harris, Daniel Hudson and Sean Doolittle in this rendition of the law firm, and Tanner Rainey, Wander Suero, Roenis Elias, and Hunter Strickland in the middle, and depth with Ryne Harper, and Kyle Finnegan, this should be a strength for manager Dave Martinez. He could also add a long-man from whoever does not win the fifth starter spot from the trio of Joe Ross, Austin Voth, and Erick Fedde. All signs point to Voth in the bullpen, but he could certainly beat Ross for the fifth starter’s spot then Ross could be the long-man in the ‘pen.

That brings us to the strength of the team, and probably the best starting rotation in baseball 1-to-4 with Max Scherzer, Stephen Strasburg, Patrick Corbin, and Anibal Sanchez. We know what this group is capable of doing, and the only trepidation is how the long postseason affected this group. Sure, add to the unknown the age regression, and health issues which Fangraphs accounted for, and this group plus the backup starters are a +19.1 WAR as a group.

The outfield is set and a strength on this team with upside if you believe Victor Robles can exceed the +2.0 WAR that Fangraphs is projecting for him. Juan Soto is the number one leftfielder in all of baseball, and Adam Eaton showed that he can be a solid contributor for the team. Beyond that, the question is depth as Rizzo only has two other outfielders on the 40-man roster, and they are the inconsistent Michael A. Taylor and the career bench player Andrew Stevenson who showed that he could be a very good pinch-hitter. The depth in the minor league system is Yadiel Hernandez and Mac Williamson who Rizzo signed to a minor league deal. There are still depth players available like Kevin Pillar and Billy Hamilton so Rizzo could make a move if he is not satisfied with his outfield depth.

Now to the weak links on the team as the catching tandem is ranked 26th in baseball in a duo that features 36 ½ year old Kurt Suzuki and Yan Gomes. Both can put up good offensive numbers, but Suzuki is a year older and last year only threw out 5 base-stealers for a 10% caught stealing rate. His defensive stats were near the bottom of primary catchers based on blocking skills, framing skills, and his arm. Gomes was slightly below average on his defensive skills, but is known as a good blocker on balls in the dirt which is why he was, and will continue to be, Corbin’s catcher. Rizzo picked up Welington Castillo on a minor league deal, and he was the second worst defensive catcher in baseball. Fangraphs has the Nats catchers projected to a combined +1.4 WAR. Yes, there are four teams worse than the Nats in catchers. The good news is the Nats pitchers like throwing to Suzuki and Gomes.

The infield is the great unknown on this team beyond Trea Turner who anchors the infield at shortstop. The rest of the infield will be figured out in Spring Training from Starlin Castro, Howie Kendrick, Asdrubal Cabrera, Eric Thames, and Ryan Zimmerman. Yes, that is five players for three spots then you have top prospect Carter Kieboom that makes it possibly six players for three spots. Zimmerman can only play first base, but the rest of those players have positional flexibility. Add to the mix Wilmer Difo who has an non-guaranteed $1 million deal and Adrian Sanchez. Both of those players are out of options, and do not have a clear path to making this roster.

There is upside on this roster. But we won’t fool ourselves to say on paper that this team is better than the team that just won the World Series. The “W-Factor” is Starlin Castro based on what he did after the All-Star break last year as he made some mechanical tweaks and it worked as he widened his stance and hit fewer groundballs. Castro is projected by Fangraphs at a +1.0 WAR, and if he gets anywhere close to those numbers for his final two months of the season when he slashed .310/.345/.593/.937, he could jump up to superstar status. Okay, that is a big “could” if Castro became that player, but that is what this team needs to step up to the next level this year.  Also consider Turner‘s slash on his return from the broken fingers after May 26th was .306 /.363/.509/.871. Additionally, Robles slashed .290/.374/.441/.815 while also playing Gold Glove defense in August. Could those players improve enough to carry this team along with Soto and the rest?

“We’ve got versatility. Of course, you’re not going to replace or replicate Anthony Rendon, his numbers on the field, … But we’re going to be a different team,” Rizzo said. “I think we’re going to be a very competitive team and our goal hasn’t changed. We’re here to win a World Series. That’s our focus.”

A lot of pressure has been taken off of the Nats as many of the analysts expect the Dodgers to run away with the NL crown. For that matter, there is not one projection service who has picked the Washington Nationals to win the NL East. Last year, the Braves were picked at best to finish in third place, and they won the NL East. There is a reason we play the games, and if everything goes right for the Nationals, they might surprise a lot of the pundits who are not giving them a chance in 2020.