How do these 2020 #Nats stack up against the competition?

How do the 2020 Washington Nationals stack up with the competition? As Fangraphs tinkers with the numbers each day, the Nationals are at a +43.4 team WAR, and that is 8th best in the Majors and 3rd in the National League. But how do the Nats rank at each position? We have those numbers for you. Clearly after the changes at third base you knew that position was downgraded, but how do the Nats compare to the other 29 teams will expose the strengths and weak points.

The most important number in these projections is the team WAR. An average of 13th in all spots is not a weighted average. Some positions like pitching would be weighted higher, and in the other direction a ranking of 15th in the designated hitter spot is insignificant for an NL team. Being the second best team in starting pitching is significant due to that is the most important overall in weighting a roster if you believe it all begins with starting pitching like general manager Mike Rizzo does.

If we analyze where the Nationals are in the bottom half of the Majors, we can analyze the weak spots, and it feels like 2017 all over again with the first base and catcher position. As much as we like Kurt Suzuki, his defensive ratings were near the bottom in 2019 and that is out of all starters and backups in the Majors where he was 104th of the 113 catchers who played last year. The second lowest defensive rated catcher last year was Rizzo’s newest signing: Welington Castillo. The irony.

The Nats were also rated in the bottom half at centerfield and third base too. If you analyze the centerfield position for the Nats and then compare that to all of the teams in the Majors you can see why the rankings might not be as troublesome as it might appear at first glance. There of course is much hope that Victor Robles can outplay the +2.0 WAR projected by Fangraphs. 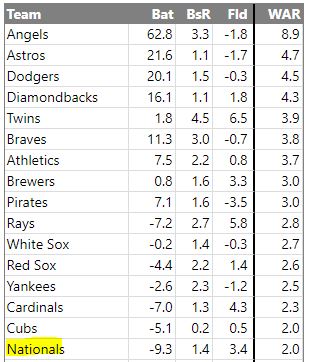 On the other hand, Juan Soto dominates as the best leftfielder in the Majors and the Nationals are 0.1 from the Yankees for the top starting rotation. With Max Scherzer, Stephen Strasburg, Patrick Corbin, and Anibal Sanchez leading the way, the Nats really just need some of their position players to step up to gain in the rankings.

Fear not, Mike Rizzo has payroll left to make upgrades to his roster if he sees a bargain now or closer to the trade deadline.

This entry was posted in Feature, Recap, Roster. Bookmark the permalink.
← Previous Article | Next Article →