The Mookie Betts blueprint for a trade! 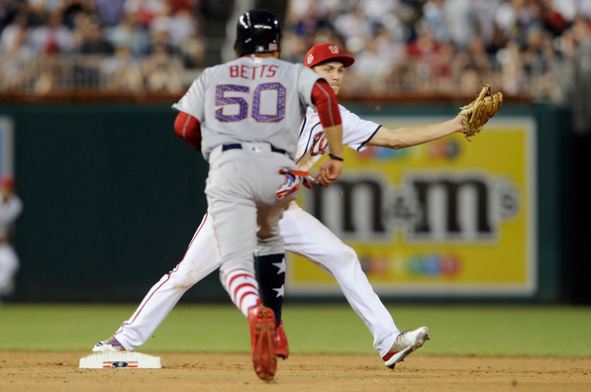 When a trade falls apart and twenty-eight other competitors see your blueprint in bold ink, a general manager from another team could step up to the plate and propose a deal of their own. How could you acquire Mookie Betts and get the Red Sox more than Alex Verdugo and Brusdar Graterol while getting their CBT cap in order? The cash part of the deal is certainly complicated as is including David Price in the Betts deal. What would a smart GM do if he was one of those top teams looking to give his team a better chance to win it all? Here’s the issue — best teams on paper usually do not win it all. Injuries happen, players improve, players get worse, players perform better and players under-perform. Just because a team gets Mookie Betts does not guarantee a World Series championship.

So what is a year or a few months of Mookie Betts worth? He is set to be a free agent after this season. How’s about David Price? He is 34 ½ years old and Fangraphs believes even at a 4.16 ERA he is worth a +2.6 WAR. Price has a $31 million AAV on him for three more seasons. He is a cash drain, and there lies the problem. Betts is set to make $27 million which means the Red Sox are trading a massive $58 million in AAV. If the rumors are right, Boston is willing to send $48 million over for David Price at $16 million a season which would lower the Red Sox burden by a net $42 million and get them $19 million under the CBT cap. There clearly is room in financial flexibility for the Red Sox to eat more cash this year and still remain under the cap.

Any teams that trade for Betts before the season begins could also put a Qualified Offer on him and receive back a compensatory draft pick when he signs on with another team last year or the team that trades for Betts could trade him off before the trade deadline if things do not go well for the acquiring team. But what about flipping David Price for a prospect at his new net of a $15 million AAV?

There are literally hundreds of ways of making a trade and figuring out the cash. With that said, the Dodgers and Red Sox could figure out a revised trade that included the Twins as the third team.

Could the Padres jump back into the mix? What about the Washington Nationals? Betts is projected to put up a +6.6 WAR. That is higher than the +5.7 WAR than Anthony Rendon is projected at. There probably is no way the Nats would factor into a Betts trade unless they committed to going over the CBT cap and were willing to part with at least two prospects.

The Nationals outfield is set with Juan Soto, Victor Robles, and Adam Eaton. Where would you play Betts in a Nats configuration? Eaton to leftfield and Soto to first base is the only way to add enough WAR to make a significant difference in a net gain large enough for the team. Eaton is worth a +2.1 WAR this season and Soto at +5.1. If Soto could replicate that at first base he would be the No. 1 player in all of baseball at that position and ahead of Freddie Freeman‘s +4.3 projected WAR. The Nats weakest position is at first base with a projected cumulative +0.9. With all of the stratagem, there still would not be enough to add a full +6.6 to the team’s projected +43.4 WAR. The Nats could not acquire Betts and bump up to a +50.0 WAR as Soto might not project at a +5.1 WAR at first base and the +0.9 WAR currently on the books at first base has to be factored in. Betts by our projections would take the Nats to a +47.5 to +48.5 WAR and 93 wins.

Of course all of this is hypothetical. Have fun with it.