The Winter Meetings open up in San Diego; Nats payroll is open for business! 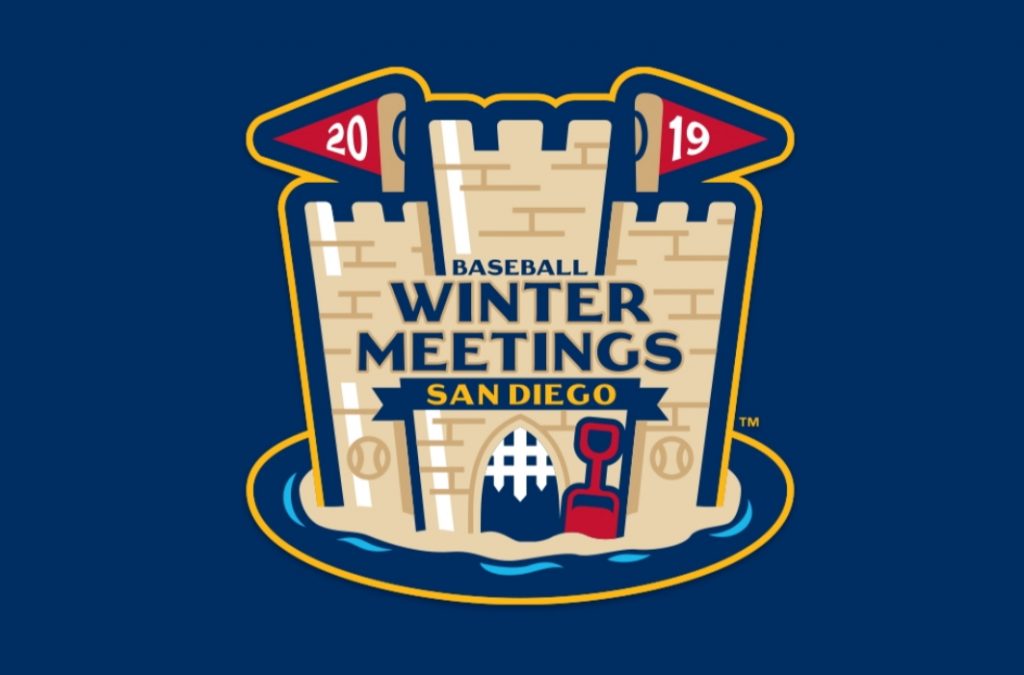 As the Winter Meetings officially open in San Diego, most of the key participants will be relaxing today with some golf at Torrey Pines and some other golf venues ahead of the some wining and dining at the Hilton San Diego Bayfront. The most important singular person at these meetings is super agent Scott Boras who lives just up the beach in Newport outside of Los Angeles, and he will be the man at the center of the free agent universe as he operates the hallways and suites at the Hilton. Boras reps Stephen Strasburg, Anthony Rendon, Gerrit Cole,  Mike Moustakas, Hyun-Jin Ryu, Dallas Keuchel, and Nicholas Castellanos and others. Only Moustakas is signed on that list. In the top dozen players, the non-Boras clients are  Marcell Ozuna, Madison Bumgarner, Zack Wheeler, Yasmani Grandal, and Josh Donaldson. Of the top dozen players, three are already signed and two of those players, Grandal and Wheeler, are not Boras clients.

Get ready for some new Borasisms like “Playoffville”, “Veteranism”, “Playoff Calibration” and “Team Hibernation”.  A feisty Boras did not mince words this week in response to Mark Lerner’s comments on what his team could afford. Two weeks ago Boras was complimenting Ted Lerner on his spending habits and taking risks.

“Those types of owners that do that and base it on a reasoned thought. But really it’s the will. It’s like a player who has a will to perform, to win, to do things. They talk about Howie Kendrick. … By the way I don’t represent Howie Kendrick. But I’m just talking about examples of players who have grand impact on that win barometer.”

This weekend after Lerner’s comments to NBC Sports Washington, the Nationals news leaked that they have re-signed Kendrick. In addition they re-signed Yan Gomes, and the only other 40-man spots they have given up was to Ben Braymer to protect him from the Rule 5 draft, and today the Nats said they signed minor league free agent Kyle Finnegan who spent seven years in the A’s minor league system. Finnegan projects to be a middle of the bullpen reliever.

The Nats  have some major holes to fill with 8 of their 25 players from their World Series roster are still free agents: 3B Anthony Rendon, 2B Asdrubal Cabrera, 2B Brian Dozier, 1B Ryan Zimmerman (option declined), 1B Matt Adams (option declined),  RHP Stephen Strasburg (opted-out), RHP Daniel Hudson, RHP Fernando Rodney. The only Nats free agent who has gone elsewhere so far is Gerardo Parra who went to the Giants of the Japanese League.

Let’s go position by position where the holes exist:

STARTING ROTATION: These Washington Nationals teams are built on the starting rotation and the dividends of that paid-off handsomely in this year’s World Series victory as no team could fully matchup. The Nationals can fill-in the #5 spot with Joe Ross, Austin Voth or Erick Fedde and put the two runner-ups in the bullpen, but who takes the #2 spot vacated by Strasburg to fin in the middle of Max Scherzer, Patrick Corbin and Anibal Sanchez? Right now they are the Big Three, but Strasburg showed that he could move ahead of the aging Scherzer as the Nats #1 starter. If Strasburg did depart, Hyun-Jin Ryu is the type of player who the Nats could look to and certainly there will be some other names available that we will look at in more depth.

BULLPEN: With the new 26-player roster, the Nationals will certainly carry eight relievers. How great did that rental of Daniel Hudson look for Kyle Johnston in that deadline trade? Can the Nats figure out a way to get Huddy back? With Doolittle’s option picked up, the Nationals are possibly in need of only one or two arms but you can also see the possibility that Rizzo could be done in the bullpen with Hunter Strickland tied up for the 2020 season. In addition they will have some young starters (Ross, Voth, and Fedde) who do not make the rotation and could slide into the bullpen. There will be returning relievers like Tanner Rainey, Wander Suero, and Roenis Elias, but who do you see as the 7th and 8th inning set-up men?

FIRST BASE: For the first time ever, Ryan Zimmerman is not with the Washington Nationals. Okay, before he was drafted in 2005 he was not a Nationals player for a few months, and Zimmerman indicated that his agents at CAA spoke to Rizzo in November at the GM Meetings. Zim just got a check for $2 million to say goodbye when his option was declined. The Nats have the flexibility to play Howie Kendrick at first base and the team could look to switch-hitter Asdrubal Cabrera or go outside for a left-handed first baseman like Eric Thames, Mitch Moreland or the switch-hitting Justin Smoak who are all free agents as well as Matt Adams who just got married this weekend. Could the Nationals look to add more WAR through a trade with Cleveland for Carlos Santana or see if they could get Dominic Smith from the Mets?

SECOND BASE: Just like first base, the Nationals can fill second base from Kendrick and look to re-sign Asdrubal Cabrera, but also look to Carter Kieboom to add some youth and athleticism to the mix if he earns a spot in Spring Training. As we wrote about previously, Fangraphs is bullish on Kieboom and project him at a +2.5 WAR.  He is now the organization’s top position prospect, and gives manager Dave Martinez positional flexibility along with the re-signed Wilmer Difo who also is not a “lock” to make the roster.

THIRD BASE: To nobody’s surprise, Rendon chose free agency even after it was rumored he was offered a deal in the $215 million range. While Kieboom has played some third base, the thought is to keep him at second base and look to top free agent Josh Donaldson who is projected to make $24 million a year on a 3-year deal.  Would the Red Sox trade Rafael Devers? Probably not but the Nats could look to the Royals for Hunter Dozier or the Diamondbacks for Eduardo Escobar or possibly take a chance on Miguel Andujar who had a poor 2019 and was injured. Another idea would be going after Didi Gregorius and move him to third base.

CATCHER: The catchers  are set with the re-signing of Gomes. While every day was not perfect with the Kurt Suzuki–Yan Gomes catching tandem, it was still the best the Nats have ever had. The offensive production was strong as they combined for an outstanding 106 RBIs just in the regular season and some huge run scoring plays in the postseason. The issue is more to Suzuki’s durability as the grind got to him and he had elbow soreness, and other ailments. Suzuki ranked #114 of all catchers on defense in Baseball Prospectus and Gomes was about league average.

BENCH: If Ryan Zimmerman is back at first base and Carter Kieboom at second base, the bench should be five players with the backup catcher and hopefully reuniting with Asdubal Cabrera. The Nats did offer arbitration to Michael A. Taylor and the fifth outfield spot could go to the left-handed Andrew Stevenson who has turned into a fine pinch-hitter. Every time you think he can’t do it again, he delivered, and he showed in the Wild Card game that he can pinch-run too. At the league minimum, he would fill the spot well and hopefully he could replicate something close to his 2019 PH slash line at .421/.560/.579/1.139. Yes, that was in a 25 plate appearances ample size. His overall numbers with a .367 BA and .953 OPS were darn good too.

This is what the Nats look like today and going forward there will be many moves that Rizzo and his staff will make. There always is the chance that Rizzo could make a trade that you never saw coming.

The chart below shows that the Nationals have approximately $71 million below the CBT cap in payroll and salaries. The numbers shaded in green are estimates and while Rendon is not signing for $24 million, that number was used to get the numbers under the cap. If Rizzo does not sign another bullpen arm, he has $8 million in additional funds to spend. There could also be some money picked up in other areas and also if Rizzo decided to trade away a player like Taylor. 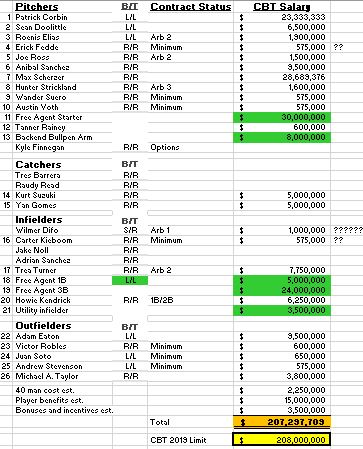