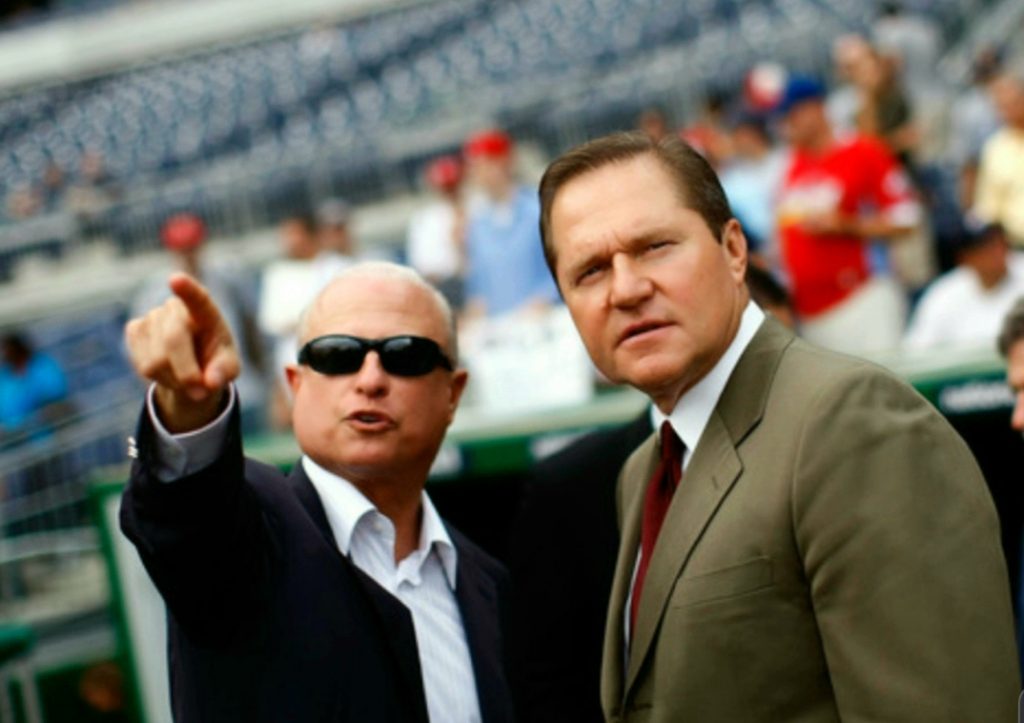 Mark Lerner with Scott Boras in happier times in 2009. Photo by Win McNamee for Getty Images

From Monday’s smashing success at the Nationals premiere of the World Series documentary, Mark Lerner agreed to do another interview today. It turned out to be another of those “cringeworthy” one-on-one interviews like Lerner has done before. Clearly, Ted Lerner’s son lacks the ability to maneuver through the minefield of direct questions about free agents when the situation calls for a more subtle response. The interview with Donald Dell for NBC Sports Washington appears to not have been done with any prepping from the public relations department. When Ted Lerner was the principal owner of the Nationals he was seen but rarely heard. He would never talk about the team’s strategic moves and always left that up to his baseball people like general manager Mike Rizzo. When the reigns of the team was handed to Ted’s son, Mark has given the occasional interview, and he lacks that gift of gab.

We wrote last week that a source told us the Nats would not spend over the CBT limit of $208 million, and while people do not want to hear that, the system has limits. Both Anthony Rendon and Stephen Strasburg remain unsigned and these stars were drafted by the Nationals and were stars for them in the postseason, and if you listen to what Lerner said they will only have room for one of them to return if they want to return.

“Realistically, and this is not really news to anybody, we really can only afford to have one of those two guys,” Lerner told Donald Dell of NBC Sports Washington with regards to Rendon and Strasburg. “They’re huge numbers. We already have a really large payroll to begin with. So we’re pursuing them, we’re pursuing other free agents in case they decide to go elsewhere.”

When you say you “can only afford to have one”, the comment comes off as pure fiction because the Lerner family who are the majority owners of the team are billionaires. Of course they could afford to do it. The team is coming off of a World Series win and with that they have a financial windfall. That is the issue when Lerner talks because he created a public relations nightmare with these comments that have sent fans into a frenzy on social media. What he probably meant to say was the team is operating within the constraints of that CBT cap and will not spend over the $208 million limit for the 2020 season and by signing both players at the asking price would push the Nats over that limit.

There is a harsh reality that the Nats who have outspent every team except the Red Sox the last five year and spent two of those years above the “cap” and penalized for it — and have been trying to stay competitive and spend money, but when your players are always trying to maximize their contractual values which they are entitled to — it makes it difficult to sign everyone. Other players not in the Scott Boras stable have shown the willingness to stay with their current teams and not shoot for record breaking contracts like Jacob deGrom (5 years $137.5 million), Alex Bregman (5 years $100 million), and Ronald Acuna Jr. (8 years $100 million).

“It’s not up to us,” Lerner told Dell. “We can give them a great offer, which we’ve done to both of those players, they’re great people, we’d be delighted if they stay, but it’s not up to us. It’s up to them. That’s why they call it free agency.”

Free agency and free to do what you want is what players get when their period of team control is over. We wrote a piece last week to illustrate that if the Nats paid a third baseman $32 million (AAV) and a starting pitcher $30 million (AAV) and cut corners in other areas, the Nats would still be approximately $5 million over the CBT limit of $208 million. That is the harsh reality — it’s close but not close enough.

UPDATED: On Friday morning, Scott Boras, the agent for Strasburg/Rendon, responded to Lerner’s comments via a text to Ken Rosenthal at The Athletic:

“The Nationals are experiencing a revenue festival in 2020,” Boras wrote via text on Friday morning. “World Series momentum has blossomed, millions in DC.

“The franchise value has increased by nearly $2 billion since their purchase. The Nationals made an extra $30 million winning the World Series. Attendance will increase by more than four to five hundred thousand. TV ratings and advertising rates all skyrocketed.

Rosenthal writes, “In the open market of free agency, Rendon is expected to command a deal in excess of the Nationals’ offer as he enters his age 30 season. Strasburg, who will pitch next season at 31, is expected to receive a contract of at least $150 million and might top $200 million as well. The annual salaries in their new contracts likely would be in the $30 million range. … The right side of their infield is unsettled, and they must rebuild their bullpen.”

“Nationals attendance declined 10.6 percent last season from 2018, falling from 2,529,604 to 2,259,781. The team’s total was its lowest since 2011, ranking 16th in the majors, and its TV ratings on the Mid-Atlantic Sports Network also dropped 10 percent.  (The Nationals remain in a dispute with the Orioles about the TV rights fees they receive from MASN.) … The increase in franchise value since then is perhaps not as dramatic as Boras indicated. Forbes valued the club at $1.75 billion before the start of the 2019 season, though Major League Baseball routinely disputes the Forbes valuations.”

One of the points that Boras misses is that while there is a windfall as we mentioned from the World Series, sources told us and we reported several times through the season that the cash-strapped Nats were seeing a sizable drop in attendance by over 15% through mid-season and the team was looking at losses from $10 to $20 million on their operating budget. Winning the World Series of course pushed them into the black, but what happens in two or three years if MASN is not generating the revenues and attendance declines again after the euphoria over the World Series fades? It is a scenario that could happen and the Nats could be paying a 35 year old Strasburg and a 34 year old Rendon a combined $70 million. Will Boras give a guarantee that these players can prop up sagging MASN viewership (mostly due to the Orioles and cord cutters) and a possible decline in ticket sales?

As the morning further unfolded, in a smart PR move, we saw Twitter blow up as rumors that Howie Kendrick re-signed with the Nats at about 10:00 AM on Adam Eaton‘s birthday. The Nats paid a slight premium of $6.25 million which will further swell the payroll, but well-deserved for Kendrick who was a key piece for the Nats in 2019. His deal reportedly includes a 2021 mutual option.