Reminiscing about Anthony Rendon in 2011 and before and beyond! 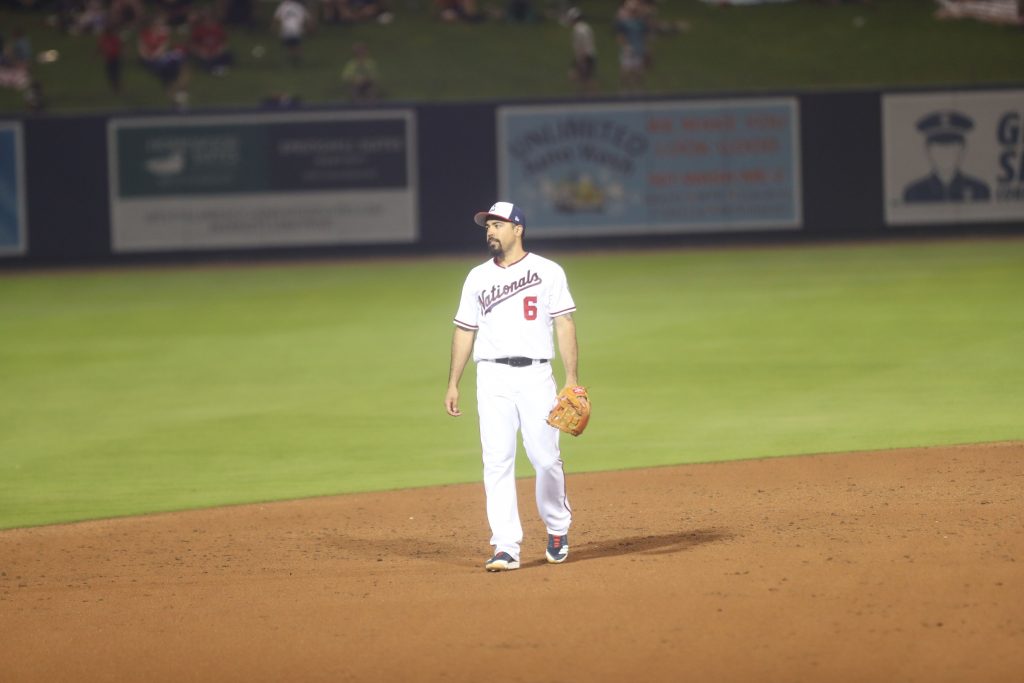 The Washington Nationals plan of tanking during 2008-2010 was painful for fans, but the draft picks resulting from those disastrous years yielded in succession: Stephen Strasburg, Bryce Harper, and Anthony Rendon. Those are three All-Star players who have been at the top of their game for the Washington Nationals. The thought of any of them leaving will shake you at your core. Reality struck last year when Harper signed with the rival Phillies. It was a gut-punch for many. When Jordan Zimmermann left for Detroit it did not hurt as bad. But nobody wants to see other key defections. Drafting stars like Strasburg, Harper, and Rendon can change a franchise and a mindset in the fanbase. The Nationals have not picked in the top half of any draft since Rendon was chosen in the 1st round (6th overall) of the 2011 MLB June Amateur Draft from Rice University in Houston, Texas.

There have been attempts to extend Rendon in prior seasons, and getting a deal done always seemed contingent on Harper’s plans. Without Harper, there was a clear lane to keep Rendon until they hit a fork in the road. A rumored offer of $210-$215 million was too late at the time. Maybe Rendon and his agent will circle back to it — who knows.

“That’s up to them,” Rendon said before the 2018 season about having his agent negotiate with the team. “That’s why I hired him. I dropped out of school. That’s why I got [my agents]. I can just focus on playing. They’ll work out all the kinks. Whatever happens, happens. Awesome.”

The inability to extend Rendon even before 2019 is on a similar path as Harper’s tenure went. There were attempts to do an extension and all attempts failed so far. Have they given up? Who knows. Time will tell. The good news was after Harper went to free agency the Nationals did not cry in their corn flakes, and they set out to make a quick splash in free agency and bagged Patrick Corbin who was the number one pitching prize. Rizzo was not done there as he got Brian Dozier, and Anibal Sanchez also and had Victor Robles on the Opening Day roster whereby the Nats more than made up for the loss of Harper. The issue with the possibility of losing a +7.0 WAR player like Rendon is that there is no replacement for him except for a sum of the parts of more than one player will have to be greater than +7.0. The Nats window for winning more is still open though no matter what happens with Rendon.

“If you do a little counting around in the clubhouse, we should be able to be competitive for a few more years as well. You don’t see any reason for a drop-off,” Max Scherzer made that comment three years ago and clearly he was right.

Scherzer was spot-on about the future. The Nats have stayed competitive. There is so much talk about the window of winning opening and shutting for this team. The Nationals just won the World Series so the window certainly stayed open after Harper left, and he had a prophetic statement during Spring Training of 2017.

“I mean, there’s so many guys on this club that can help us in the long haul as well,” Harper said before the 2017 season. “Everybody talks about now. This year, next year — the window. But the [Nationals’] window is long.”

Harper was also prophetic about a parade for D.C., and the truth is the name on the back of the laundry may change but the front of the jersey is what matters. Some fans feel that Rendon is irreplaceable, but at some point like we saw with Jayson Werth — age will get you after a while anyway so whether it is now or seven or eight years from now — little will be the same in the game of baseball. Turnover is a reality. A baseball career is short. Staying with one team is even shorter lived.

If you ever saw Rendon play in college for Rice, you could see “it”. Before TalkNats came into existence, I would wax poetic about this kid from Texas who had the best barrel to ball skills I had ever seen from a teenager. He controlled his bat through the zone and made college pitchers look like they were Division III players. His wrists were magic and he allowed the ball to get deep and used that quickness to his advantage. In 2010, I asked Wayne Graham who coached and recruited Rendon where he stacked up against some of the best he had coached, and he said Rendon is the best hitter he ever had. I asked for clarity of the coach who was 74 at the time, “Better than Lance Berkman?” and he responded, “Yes.” Graham who retired from coaching last year at 82 years old had coached many All-Star players. There was no hesitation on Rendon. He saw it. I saw it. I let everyone know before that 2011 draft that Rendon was the best hitter in that entire draft. When Rendon fell to the Nats at number six in the draft due to some health concerns, I said the Nats just signed a future batting champ. Okay, he came close to winning a batting title, and he could still win one. As I used to do back in the old days, I flew to Spring Training early on before the crowds to see the prospects and report back.

What I saw in February of 2012 in camp at Viera, Florida was Harper and Rendon swinging together. Rendon had a simple compact swing with no glaring holes in it. Harper had a violent swing with many moving parts. When I saw Rendon go down and get to balls at almost a 45° angle and connect barrel to ball on the sweetspot, you could see it and hear it. The Nationals had the makings of greatness on that field. Clearly Harper was über talented and already hyped. The way Harper threw his hands at the ball at contact to add that extra power was advanced, but his moving parts like Ryan Zimmerman‘s swing can make you nervous that pitchers will exploit holes versus that sweet swing of Rendon that had no discernible holes. 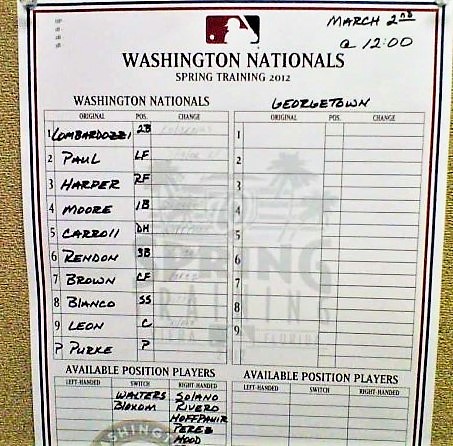 There was a March 2nd game against Georgetown University in Spring Training 2012. Manager Davey Johnson penciled in some players who were younger than some of the Georgetown players like Rendon and Harper to make it interesting and keep it fair for the college kids. What an exhibition game that was. For weeks I would write on the NatsInsider blog what I had witnessed in training camp. Greatness was there in Viera, Florida, and with the right coaching, some good luck, and a few more supporting pieces, you could envision the building blocks that were there for a championship team I wrote in Spring Training of 2012. That team had just acquired Gio Gonzalez and Edwin Jackson to fill in a rotation with Strasburg and Zimmermann. With Ryan Zimmerman occupying third base we debated where Rendon would play, and the answer was easy — you will find a spot for him in the middle of the infield or shift RZim over to first base.

In Rendon’s first full year in 2014, he was a star. He scored 111 runs with 83 RBIs and was voted 5th in the MVP voting and won the Silver Slugger. The Houston native was as smooth as silk in all of his advanced mechanics. On April 10th of that season, Tony “Two Bags” had a hit in every game to start the season. He was poetry in motion. The only thing that would stop Rendon from greatness was his desire to be great. Each year, the scouts and analytics groups on opposing teams would try to exploit Rendon’s weaknesses which were few. If he could just cover the top few inches of the strike zone (inside and outside) that was his kryptonite — if he could, he would reach that greatness. In 2019 through his work on balls up in the zone, Rendon came into the season with no kryptonite, and he punished balls up and away at a .462 batting average in 2019 and inside middle at .500. He looked destined to win that batting crown that I talked about 8 years earlier. Rendon was batting .338 on September 6th. If he maintained that level, he would do it easily as Christian Yelich was out for the season and stuck at .329. Unfortunately, Rendon went into a slump after that and batted a paltry .172 the rest of the way. He would finish the season at .319 and finish 3rd behind Yelich and Ketel Marte. Most likely the slump to finish the season for Rendon was due to fatigue. When it mattered the most in the postseason, Rendon’s bat lit up again, and he was always about team before self anyway.

The legend of Tony Rendon was cemented in the postseason setting a record for his “clutchness” with three home runs in the 7th inning or later in three consecutive elimination games. For a player who has never hit a walk-off home run, he showed that he is clutch to finish games, and he did it on the biggest stage. That is why Rendon will get paid because he certainly peaked at the right time.

Maybe the only weakness Rendon has is his dry personality and how he abhors those PR planned interviews in pregames and postgames occasionally. The closest Rendon came to big emotion was a “bat flip” on a home run that we later learned was a flip of disgust as he thought he missed the home run and the backspin and the right ballpark weather conditions carried the ball out of the park. Rendon profusely apologized as he ran the bases to the opposing team. Self-promotion often makes a player look better than he is in a way where perception is greater than reality. Some might mistake Rendon as being cantankerous, but when you get to know him, he just does not like answering questions about himself. He would rather talk about you. In the end, maybe Rendon’s personality will turn off some teams who cannot see him as a marquee player who will sell tickets and jerseys, but with the right marketing behind him, maybe he can if he would allow that to happen. In D.C., he does not have to be the showman; he just needs to be himself.