As of today, Mike Rizzo is in another final contractual season with the Nats! #Poll 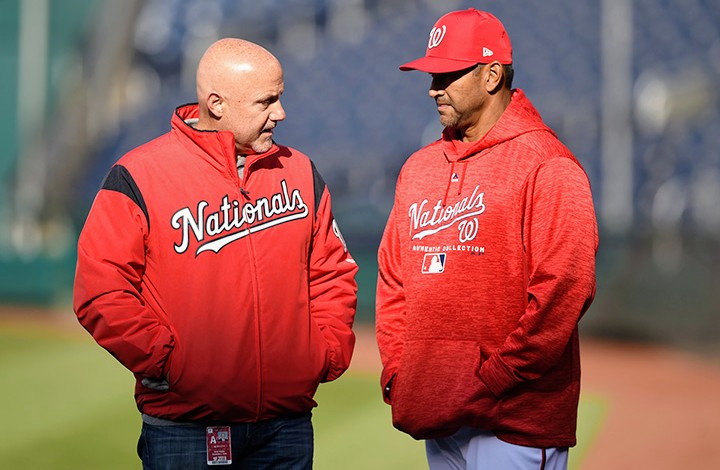 The world champions are building their 2020 team after eleven players from the World Series roster have become free agents. General Manager Mike Rizzo is more concerned about replacing Gerardo Parra on the roster than he is about his own future. Two years ago it was a common question asked to Rizzo about his future during the Nats event at Winterfest and dozens of times during Spring Training. He’s been with the Nats for over 14 years and was the first employee that the Lerner ownership group hired when they purchased the franchise in mid-2006. During his tenure, he has negotiated six different contracts for himself averaging 2.5 years per deal. So why are fans worried about Rizzo’s next deal? A seventh contract for Rizzo is only different because now he has a World Series ring.

According to reports, Rizzo’s last deal paid him over $4 million a year, and he will go past 15 years with the Nationals during the 2020 season. A few things have changed since his last contract like the World Series win, and the rumor that Rizzo is getting married in Jamaica to his long-time girlfriend Jodi Fick who he met years ago through Roger Bernadina, the original “Shark” if you were a fan back in those days. What does Rizzo want to accomplish next? Bringing another championship to D.C. of course.

“This is the organization I built from scratch. I feel it’s my home. I would feel very comfortable being here long-term,” Rizzo said before Opening Day of the 2017 season. “But we have a contract. I’ve never brought it up. If one day they approach me, we’ll discuss it, and I’d be happy to stay.”

Shortly after Mike Rizzo made that quote he received a new two-year deal before first pitch of Opening Day. That contract will run through the end of the 2020 season, and the same for manager Davey Martinez except for a source has told us Martinez has a fourth year team option.

Reports of manager Davey Martinez entering his final year of his 3-year contract with the Washington Nationals is true but we have been told by a source that the #Nats have a 4th year option at $1.25 million to take him through the 2021 season. pic.twitter.com/HizqB5Qjvb

Both Martinez and Rizzo were under fire after the team’s 19-31 start this year, and there were calls from the media and fanbase to fire both. Martinez was blamed for usage of the bullpen, and Rizzo was blamed for building a bullpen with failing relievers like Trevor Rosenthal and Kyle Barraclough who were the back-end setup men supporting closer Sean Doolittle. Now we transition from the calls of “fire them” to “extend them” and so goes the 180° turns in sports and life.

Now teams will be trying to replicate what the Nationals produced this year with a veteran group of starting aces, but that is too expensive for most teams as the Nats had about $90 million wrapped up in 2019 for Max Scherzer, Stephen Strasburg, Patrick Corbin and Anibal Sanchez.

“We’ve been highly scrutinized on how we do our business, but we do our business pretty well. I’ve seen ‘dysfunction’ and stuff like that. We are not dysfunctional,” Rizzo said a few years ago. “When you have the track record we have, the communication I have with the owners — Ted (Lerner) and I specifically, me and them — I think it works for us.”

Works for them indeed. When you win a World Series, scrutiny is replace by praise. Now teams will study how the Nats got to where they did. Some of it does start with cash. Most general managers have to beg for money to spend on free agents. Mike Rizzo has been spending lots of Lerner money since 2009 when the team set a record on a signing bonus for Strasburg. From 2017 to 2019, the Nationals only trailed the Boston Red Sox on total team payroll.

Owners get little credit but much blame. When Davey Martinez was struggling as a manager, one local writer brought up that the Lerners decision to not bring back Dusty Baker and his 192 wins and NL East titles put the Nats in the mess they were in at the time. That mess became success. If the Lerners were to blame for replacing Baker, shouldn’t they get the credit now? Right, it never seems to work like that. Rizzo is a genius again and Davey is the best manager in baseball, but the Lerners will always be criticized by some.

“If you want to do an autopsy on the Washington Nationals’ disappointing 2018 season, you don’t need to be a coroner,” Thom Loverro wrote in the Washington Times after the 2018 season. “The cause of death is easy enough to spot — just take another look at the line of Lerners sitting in the front row last Nov. 1 at the Nationals’ press conference to introduce new manager Dave Martinez. … That arrogance was at the heart of the decision to send Dusty Baker packing after two straight National League East titles and 192 wins. That arrogance was behind the team’s decision to turn a championship contender over to a rookie manager. That arrogance was evident in management’s insistence that success for this franchise is measured in World Series championships only.”

The Nationals success has worked for many reasons, and a key is that continuity in sticking with the key personnel who built this team and one continued voice from Mike Rizzo since Zimmerman’s rookie season. Rizzo is now a bona fide star among general managers. Keeping him seems like an easy decision, but today, is that the number one priority of the team?

Vote in this poll on the Nats priorities: