The miracle run is complete! The Washington Nationals are World Series champs! 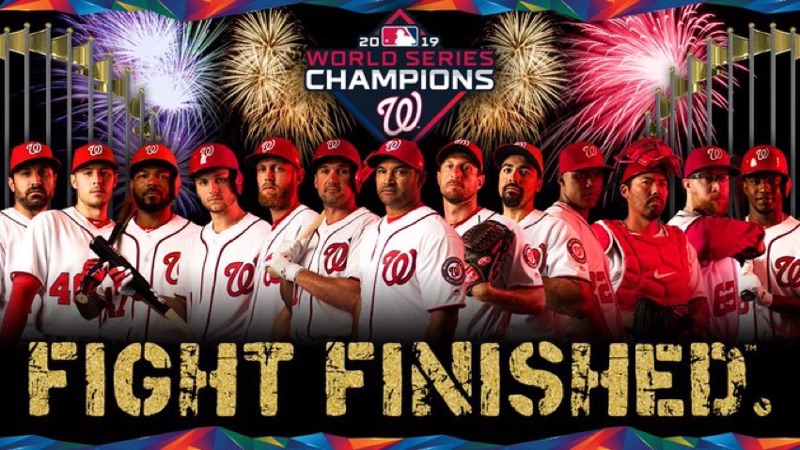 If you believe in crazy proclamations, the departing free agent stood in Clearwater Florida during Spring Training and talked about bringing a title back to D.C., and it has now happened. The miracle run is now complete. The Nationals went the hard way of having to win 12 games this postseason because they went the Wild Card route. Max Scherzer bent but did not break in this Game 7, and Howie Kendrick like he did to win Game 5 of the NLDS hit the game winning RBIs via a home run. The Nats are World Series champs with a 6-2 win in Houston.

“We stayed in the fight, and we won the fight!,” manager Dave Martinez said.

With four wins on the road, the Nats won all the games in Houston. After May 23rd, the Nats went 86-43. The same number of wins that were the number of years since DC had their last World Series team in 1933. This series was about the little things and the big things. Stephen Strasburg is your MVP, and Anthony Rendon in most years would have won that honor. But there are so many others who showed up big. Juan Soto‘s bases clearing single in the Wild Card game, and his three World Series homers have been huge. Ryan Zimmerman had a 3-run home run against the Dodgers. Everyone on the roster came through. The Nats survived five elimination games, and the others lost four elimination games in the order of the Brewers, Dodgers, Cardinals, and Astros.

The improbable is reality. The Nationals on May 24th had a .01% chance of making the postseason, and when they finally did, they were an underdog in all four series. The man so many wanted fired, manager Dave Martinez, pushed almost all of the right buttons, and his team responded behind him.