The divine line of destiny for these 2019 World Series champion Washington Nationals was unique! 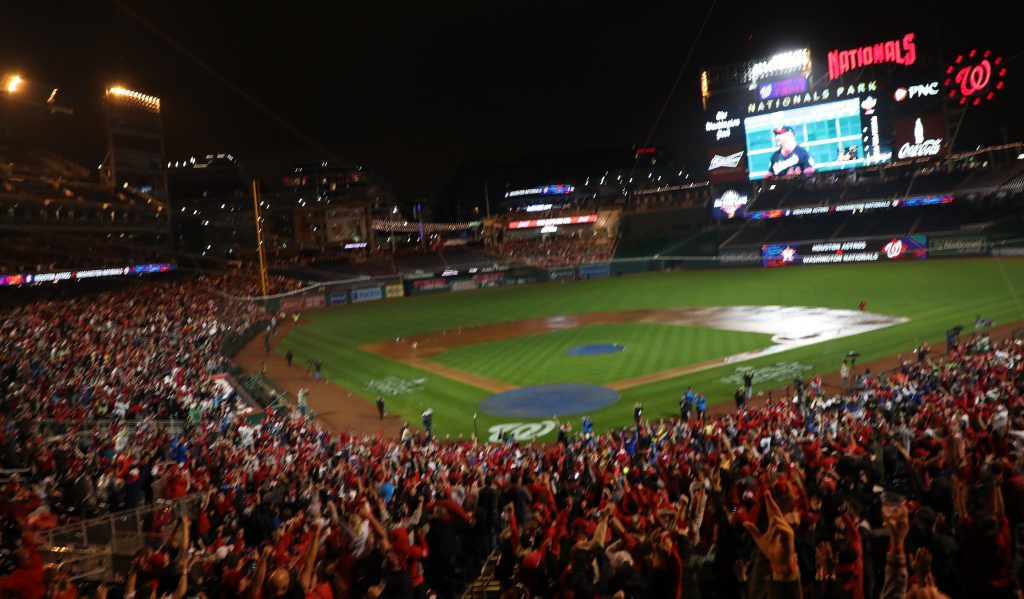 The Game 7 “Watch Party” at Nats Park erupts in the rain after Daniel Hudson gets the final out; Photo by Sol Tucker for TalkNats

When the movie is made about these miracle 2019 Nats, the beginnings started in Montreal and all of the trials and tribulations of a rocky start in 2005 with a team that was stripped almost bare in the minor leagues except for Ian Desmond and Roger Bernadina were little help until the Nats were six years old. The Expos made a trade for Bartolo Colon in 2002 that depleted the farm system of their top prospects when they sent future stars away in Cliff Lee, Brandon Phillips, Grady Sizemore and Lee Stevens for Colon. The Expos then got rid of Colon a few months later for almost nothing. Two draft picks that worked early on were Ryan Zimmerman in 2005 and Jordan Zimmermann in 2007 as key building blocks for the future of what would be part of the core of the 2012 playoff team.

Besides the two Zims, the drafts were not good in the early years given the Nationals were seemingly picking near the top of the draft, and player development was poor.  But piece by piece and some good trades and a team that “tanked” with 100-loss seasons got the building blocks going when Stephen Strasburg was drafted number one overall in 2009. The bones of this 2019 team came from so many moving parts, but key pieces were from the draft like Zim, Strasburg, and Anthony Rendon (2011 draft class) as well as the international signings of Juan Soto and Victor Robles. There was the key “PTBNL” trade that brought Trea Turner and Joe Ross to the Nats and then Adam Eaton, Sean Doolittle, Yan Gomes, Tanner Rainey, and Daniel Hudson all came via additional trades.

Ownership paid $350 million for the duo of Max Scherzer and Patrick Corbin as key free agent acquisitions, and Anibal Sanchez defected from the rival Braves for a modest two-year deal to complete one of the best rotations in baseball (Strasburg, Scherzer, Corbin, Sanchez). Nothing happens without some luck and Howie Kendrick rebounded from a torn achilles injury as a key cog in the wheel, and he became a key role player with three players who were cut mid-season from other teams and they were Gerardo Parra, Fernando Rodney, and Asdrubal Cabrera. All three were basically “freebies” as their previous teams paid the bulk of their contracts.  A key deadline trade got Daniel Hudson from the Blue Jays, but the other deadline trades did not pan out.

“We won one. We finally won one,” former World Series Detroit teammates Sanchez and Scherzer shared in an embrace.

This team had that secret sauce added with a Latino flair when Parra, Rodney and Cabrera were added and they helped to energize a clubhouse in need of a jolt. Parra singlehandedly won games for this team like the grand slam to beat the Dodgers in May and his grand slam to clinch home field advantage for the Wild Card. Bases loaded hits were a key in September and October from Parra’s slam to Soto’s single that cleared the bases to win the Wild Card game, and Kendrick’s grand slam to win the NLDS against the Dodgers in extra innings.

Ryan Zimmerman was right about the bounces as Joc Pederson missed the nail in the Nats coffin by inches on a line drive down the line, and Juan Soto‘s single that hit a sprinkler head in that Wild Card game and Kendrick’s game winner in the World Series clanked off the foul pole that was fair by an estimated 17 inches!

“That ball is an inch foul, and it could have been an inch fair,” said Max Scherzer about a key Joc Pederson shot down the line in the eilimination game 5 of the NLDS.

The bad bounces and BABIP went against the Nats in games 3, 4, 5, and most of Game 7, but in the end Kendrick’s opposite field homer had enough tail on it with backspin to clank off of the metal grated foul pole. It is when you knew this was the team of destiny. Bumpy roads do make for beautiful endings.

The 2012 Strasburg “shutdown” did pay dividends and it was finally realized 7 years later in this World Series as Stras not only was the World Series MVP but he will parlay this into a new contract most likely and replace his current four year deal if both sides can do that. Strasburg’s postseason ERA is 1.46 in 55 1/3 innings and that puts him in the rarest of company with Sandy Koufax, Mariano Rivera, and Madison Bumgarner as the best postseason pitchers.

The circuitous route worked and unconventional tactics to neutralize the awful Nats bullpen worked in the postseason as manager Dave Martinez used Corbin, Scherzer, and Strasburg at key points in the bullpen and it was Strasburg who got the win in relief in the Wild Card game and Corbin got the win in the World Series finale in relief. In addition, Doolittle and Hudson were key figures in the bullpen with Rainey and Suero getting limited work. The rest of the bullpen arms were used sparingly or not at all. While some critics doubted that the formula would work of only using Hudson, Doolittle, and the starters going in relief — it did, and it was the Brewers, Dodgers, Cardinals and Astros who all had the bullpen blowups.In fact, Josh Hader blew the save in the Wild Card, Clayton Kershaw blew the save in the Game 5 elimination game, and Will Harris blew the save in the World Series finale.

The Nationals changed the blueprint and are the first team to win a World Series after being 12 games under .500 since the Boston Braves in 1914. Their system of belief was built in the faith of their teammates and the next man up principle. They believed in their leaders in their clubhouse and ownership, and management. It was not always a smooth ride, but that is why the ultimate victories at key points were so much sweeter.

General manager Mike Rizzo always believed in building his team around a strong starting rotation, and it always seemed to be the Nats bullpens derailed their teams in 2012, 2014, 2016, and 2017 in their NL East division winning seasons — they went into Hi Lev mode every time they were ahead in this postseason and those relievers had ZERO failures.  At one point in the season, the bullpen ERA was 8+ and they finished with a 5.66 ERA which was still the worst in the Majors.

“Obviously, we had some help from the starters coming down in between starts,” Daniel Hudson said. “Obviously, we know the narrative with the bullpen all year: ‘It’s not a very good bullpen.’ But nobody cares anymore. We got a ring. That’s all we care about.”

The team that Mike Rizzo built to win 90-games had to replace a 3.4 WAR player from the 2018 roster. Some thought the departure of Bryce Harper closed the window but au contraire, it transformed the team where his dollars were spread to all of those new acquisitions mentioned from Corbin, Brian Dozier, Matt Adams, Kurt Suzuki, Anibal Sanchez, Jeremy Hellickson, and even Trevor Rosenthal. Combined those players cost less than the $300 million reportedly offered to Harper. The team got +4.5 WAR just for Corbin! On top of that Victor Robles was promoted to the Opening Day roster and he was a +2.5 WAR and made league minimum.

“And 90-wins is always a goal of mine to have a 90-win team on paper going into Spring Training,” Mike Rizzo said at the Hot Stove Q&A before Spring Training. “We believe we have that this year. We have had a lot of changes, and I think we signed nine new players on our twenty-five man roster…We really added to what I think and Davey thinks makes a championship organization tick. Pitching. Defense. Athleticism. Speed. I think we improved in all four of those aspects. It’s a big part of our identity as far as trying to develop a championship caliber club. Our scouting staff is as good as it has ever been. Our analytical staff and department is bigger and better and brighter than it’s ever been. We’re in a good spot. This so-called window is going to remain open for many more years.”

“When the off-season is done and Spring Training starts, we want to think that we have a 90-win type of team on paper. Games aren’t played on paper. I get that. I heard that, and I agree with it.  My job is to create a roster analytically, and in the eye of the scouts and with the coaching staff has a chance to win 90-games, and 90-games sometimes — some years means 85, sometimes 82, sometimes means 95 or 98. So depending on luck — happenstance, injuries, health, all that stuff it varies. My job is to put together a 90-win team on paper that can compete in the National League East, and in the National League, and I think we accomplished that this year.”

The “90-wins” on paper team actually won 93 in the regular season and 12 games in the postseason for 105 wins in total, and no team was better after May 23rd than the Nats. The Nats finish to clinch the Wild Card to the World Series championship was a 20-5 run which included two winning streaks of 8 games and an amazing 5 victories in elimination games outscoring their combined opponents 19-0 from the 7th inning to the Curly W.  If you saw the movie, you would not believe it happened — yet it did.