The NLDS rosters are set; Game 1 is today!

The Washington Nationals NLDS roster is due to MLB this morning by 10 am. This roster is different from what you saw for the Wild Card game. The Washington Nationals are in Los Angeles for Game 1 with a first pitch of 8:37pm. They arrived mid-afternoon (2:30 pm local time) at the Bob Hope airport in Burbank and worked-out a few hours later at Dodgers Stadium at 7pm PDT and a short media session before that with Davey Martinez,  Anthony Rendon,  and Patrick Corbin. The starting pitchers have only been announced for Game 1. It will be Patrick Corbin against Walker Buehler.

“We have to start by playing Game 1, and focus on Game 1,” manager Dave Martinez said. “We’re all excited about what happened [in the Wild Card] and what transpired, but they understand what’s ahead of them.”

Winning the Wild Card was step one in the Nationals postseason run, and the NLDS is a best of five games where the winner of three games then gets to move forward to the NLCS.

The Nationals know that if they can win Game 1 on the road that they get themselves in a great position, and because they acquired the pitching jewel of the free agent market in the off-season, they now have Patrick Corbin who statistically is the Nats’ best matchup against these Dodgers.

“I think we match up well with them,” said Corbin.

In 2016, the Nationals and Dodgers battled in a five game series in the NLDS. As Ryan Zimmerman said, sometimes it comes down to a few bounces that go your way. So true.

It is a wacky game, and let’s hope the Nats get those lucky bounces! 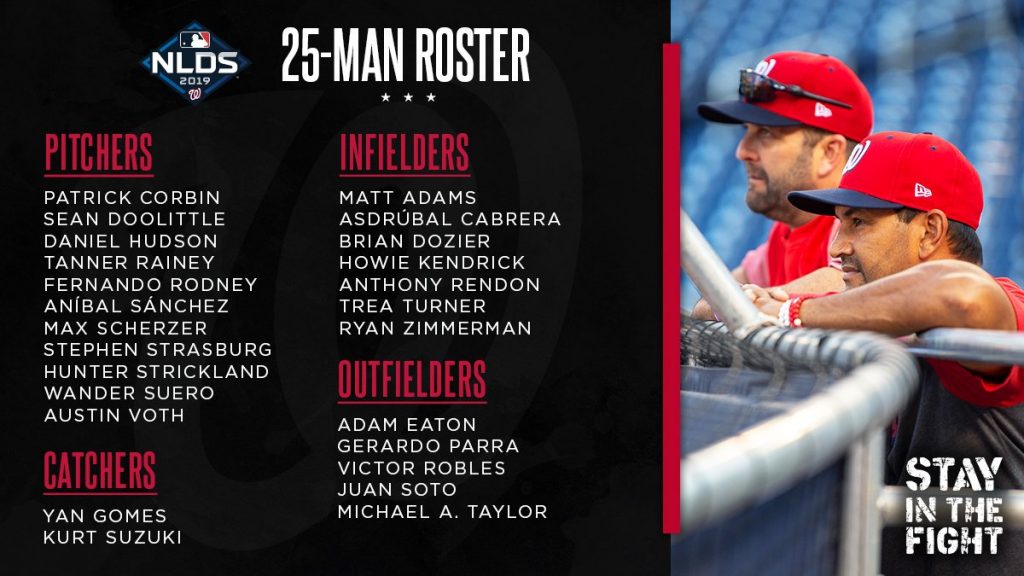