The monkey is off their backs! The Nats steal a game in their last at-bat! 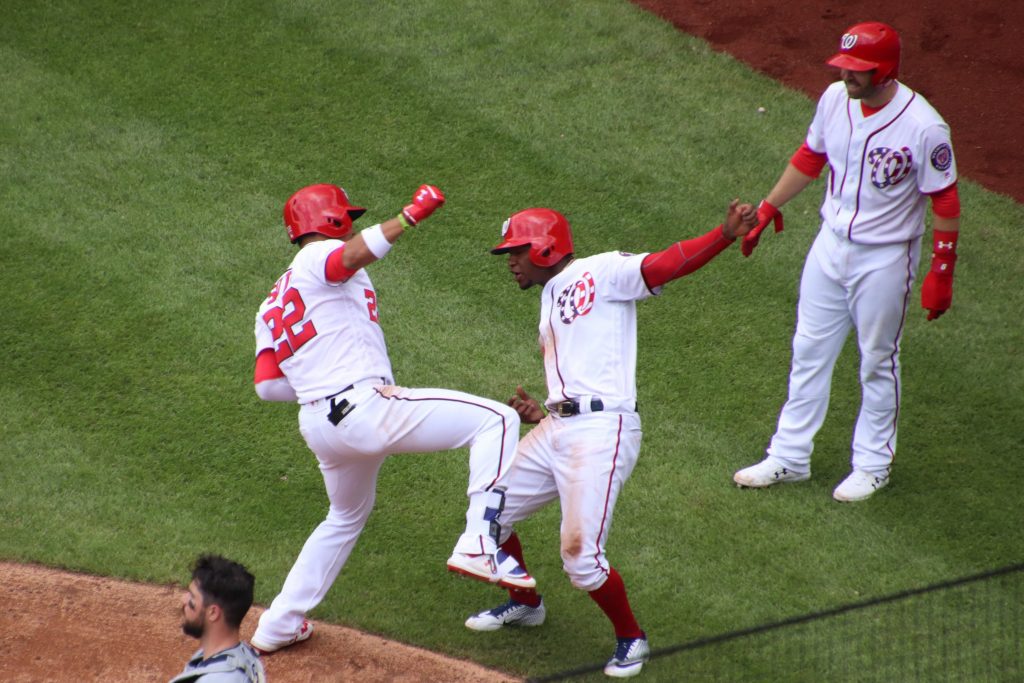 We have been reminded over and over that the Nationals were 0-4 in do-or-die games, and this 2019 team that never gives up — did not give up and came back to steal this game back from the Brewers in a similar gut-wrenching fashion to how the Nats have lived four times in their short history with excruciating losses in winner-take-all games. Juan Soto is the hero who singled with bases loaded and were the beneficiaries of a Brewers error to allow the bases to clear. The Nats win this one 4-3, and they deserved this. Stephen Strasburg earned the win and Daniel Hudson the Hi Lev save!

The team will be on their way tomorrow to Los Angeles to face the number one seed Dodgers in the NLDS. The Nats will play at 8:37 pm on Thursday at Dodgers Stadium. Who will start for the Nats? It will be Patrick Corbin to start game one of the NLDS and most likely Anibal Sanchez in game two of the best-of-five NLDS.

“Absolutely, we play to the end,” Strasburg said. “We’ve been in crazier games throughout this season. This team doesn’t quit so we fight to the end.”

It was Strasburg who relieved the 3-time Cy Young winner Max Scherzer after the 5th inning, and Stras threw three scoreless innings with four strikeouts. He was electric out there after Scherzer was torched for three runs on two home runs. Max was victimized by a tight strike zone and a meatball to Brewers catcher Yasmani Grandal for a home run that put the Nats in a 2-run hole before some people settled back into their seats. The pitch to Grandal was Scherzer’s only pitch you could criticize him for, and it seemed like a frustration pitch after he issued the lead-off walk to open the game as Max thought he painted a strikeout — and he probably did.

The Nationals scoring was just one run from a solo home run from Trea Turner until the 8th inning when Josh Hader took over with a 3-1 lead. Hader hit pinch-hitter Michael Taylor on an inside pitch that was challenged as it hit his hand and bat almost simultaneously. With Taylor on first base, Ryan Zimmerman pinch-hit for Adam Eaton, and he popped up with the Brewers playing “no doubles” and the ball fell into shallow centerfield for a single then the Nats earned their first walk of the night on a 3-2 pitch to Anthony Rendon to load the bases with two outs. With bases loaded, Soto on a 1-1 pitch hit a low liner into rightfield for a single that went under the glove of rookie Trent Grisham to clear the bases and it was that walk to Rendon that became the winning run.

“It feels amazing,” Soto said. “It is really good. Right now we are here for D.C. and we are going to keep going.  We have a long way to go.”

Before the 8th inning, the Nats had a lot of close calls like a Kurt Suzuki blast that just lost steam and was caught in front of the bullpen. The Nationals, besides Turner and Howie Kendrick, were shutdown by Brewers starter Brandon Woodruff. The Nats 2-3-4 hitters did not reach base until the 8th inning, and that has been the mark of this team to never give up and stay in the fight. On this night, it was the “little things” that doomed the Brewers. Every “pinch” the Nats had came through like the pinch-hitting Brian Dozier‘s hustle on a grounder that caused an error, the pinch-hit popup single by Zim, and Taylor’s HBP, and don’t discount Grisham rushing to the ball and making the fateful error with pinch-runner Andrew Stevenson on second base.

The Washington Nationals fans came out to support their team and a packed stadium that went well past capacity with an announced attendance of 42,993 and most were clad in red as the team asked fans to do. They were loud and proud all night long.

This win, coupled with the regular season, is the Nationals 9th consecutive win, and that is a testament to the manager, Dave Martinez, and his coaching staff and the players.