In the off-season, there was one clear pitching prize available in free agency once Patrick Corbin declined his Q.O. (qualified offer), and the Washington Nationals stepped up and grabbed that prize. They spent $140 million on a six-year deal that shocked the baseball world who had him going to the Yankees or the Phillies after their owner declared he was willing to spend “stupid money” in free agency. Corbin valued the entire package the Nats offered plus the opportunity to work with Yan Gomes who the Nats had just traded for. Today, that investment into Patrick Corbin could pay dividends worth its weight in gold if he can deliver a win in this first game of the NLDS against the Dodgers.

With Corbin, the Nationals got an NL West pitcher who had some excellent games against the Dodgers. He will face the right-handed Walker Buehler, and both pitchers have almost identical ERAs at 3.25 and 3.26 for the season. Buehler is the tale of two cities against the Nats with a 7-run game in D.C. and a 7.0 inning shutout in May in Los Angeles, and the Nats won both of those games. Some may remember that Gerardo Parra started that game at first base against Buehler and hit a grand slam against Dylan Floro in the bullpen.

While the Nats almost had to go with Corbin due to Max Scherzer and Stephen Strasburg pitching two days ago, the Dodgers had all of their pitchers rested and chose Buehler over Clayton Kershaw who will pitch tomorrow, and he will pitch against Strasburg. The Nationals will pitch Strasburg on two days rest after he threw 3.0 innings on a low mid-30’s pitch count. Manager Dave Martinez said he is treating that Strasburg appearance like a normal side session.

The lineup tonight is basically the same as the Wild Card game with the addition of Gomes who has been the only catcher who has caught Corbin all season. Martinez could have gone with a Parra at first like he did in that game in Los Angeles, but chose to stick to what has worked down the stretch. 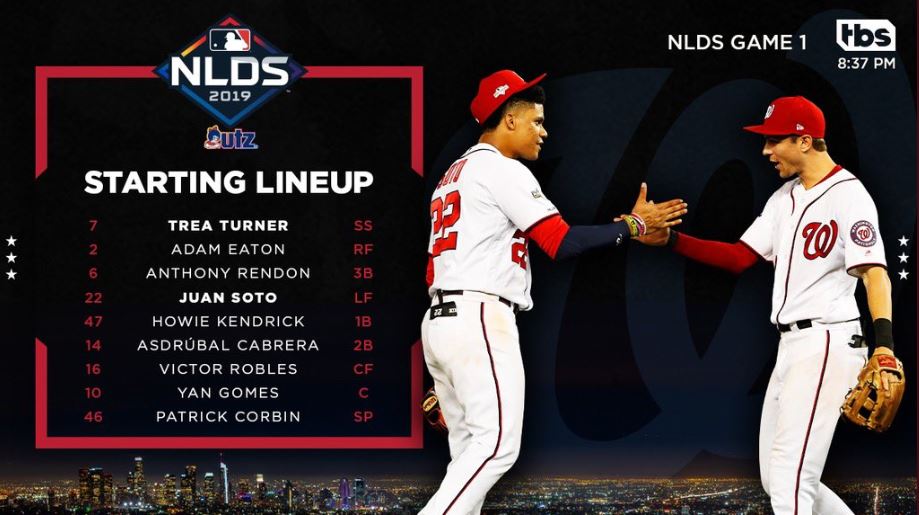