The Nationals bullpen is trending in the right direction 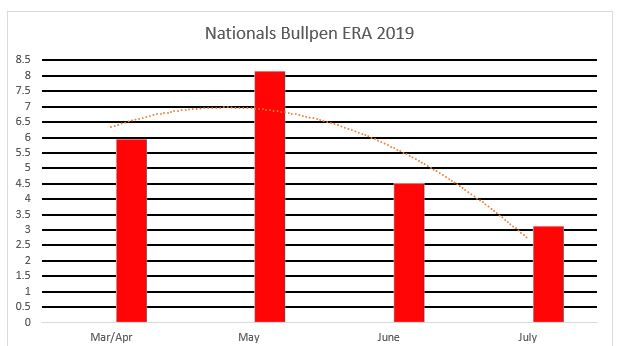 With all of the changes to the Nationals bullpen, they are trending in the right direction after the May meltdown. Sure, the 6.08 overall ERA is still the worst in the Majors but this is a bullpen that posted a 4.54 ERA in June and 3.12 in the first week of July. For blown saves, the Mets lead the Majors at 21 followed by a three-way tie for second place at 18 with the Nationals, Red Sox, and Mariners. The worst bullpen WHIP belongs to the Orioles followed by the Nationals at 1.55. The Nats bullpen OPS is fourth worst and tied with the Phillies at .808. Suffice it to say that bullpen issues are chronic in the Majors. The NL average bullpen ERA is 4.61 which means the Nationals are 1.47 over the average. Since the beginning of June, the Nationals are better than the league average.

Removing players like Trevor Rosenthal and demoting Kyle Barraclough to Double-A Harrisburg have helped steady the bullpen. In fact, all of the current bullpen members have ERAs below that 6.08 team 2019 average. The Nationals still have 18 losses tagged on this bullpen and 18 blown saves. Those numbers must continue to improve in the team’s second half.

How can general manager Mike Rizzo, manager Dave Martinez, and pitching coach Paul Menhart continue to improve the current bullpen? Use and usage is always a key in improving a bullpen, and Fernando Rodney is now taking on high lev innings to take much of the burden from Tanner Rainey and Wander Suero who have had their struggles late in the game. Rainey’s use and usage is one that has to change. He struggles in back-to-back appearances with a 2.250 WHIP and 13.50 ERA — but when Rainey appears with at least one day of rest his ERA is only 1.32. For Suero, he seems to pitch best on two days of rest, but it is difficult to pinpoint his issues because of some of his extreme ups and downs this season. Suero might not be the reliever you want to use in Hi Lev situations (.351/.386/.730/1.116) and especially with RISP situations and two outs where the batting average is .353. You might consider not using Suero in Hi Lev situations and pulling him in RISP spots.

On the trade market, the Nationals need to target Hi Lev set-up men who will cost less in trade. The issue is there are several teams that are not in trade mode which could impair the supply of top relievers. Three names that look intriguing are Tyler Clippard, Sam Dyson, and Aaron Bummer. Yes, Tyler Clippard is having a resurgent season with a 0.896 WHIP this season, but the Indians are in the Wild Card hunt and probably not looking to trade rather they might be in acquisition mode. Dyson should be available with the Giants in sell-mode, and Aaron Bummer would be very expensive as he has several years of control remaining for the White Sox, and their closer Alex Colome is expected to be traded for a haul. If Tampa goes into sell-mode which does not look promising, Emilio Pagan is a 28 year old righty who has been battle tested in the AL East with five saves and five holds and an 0.833 WHIP and an ERA of 1.73 . Tony Watson and Will Smith of the Giants will almost certainly be traded, and Smith will cost a top prospect.

The teams in sell-mode look like the Angels, White Sox, Mariners, Blue Jays, Tigers, Royals and Orioles in the American League, and the Giants, Mets and Marlins in the National League. There will be some more names emerge from those teams as well as whether the Mets who are ten games under .500 will admit they are going into sell-mode.