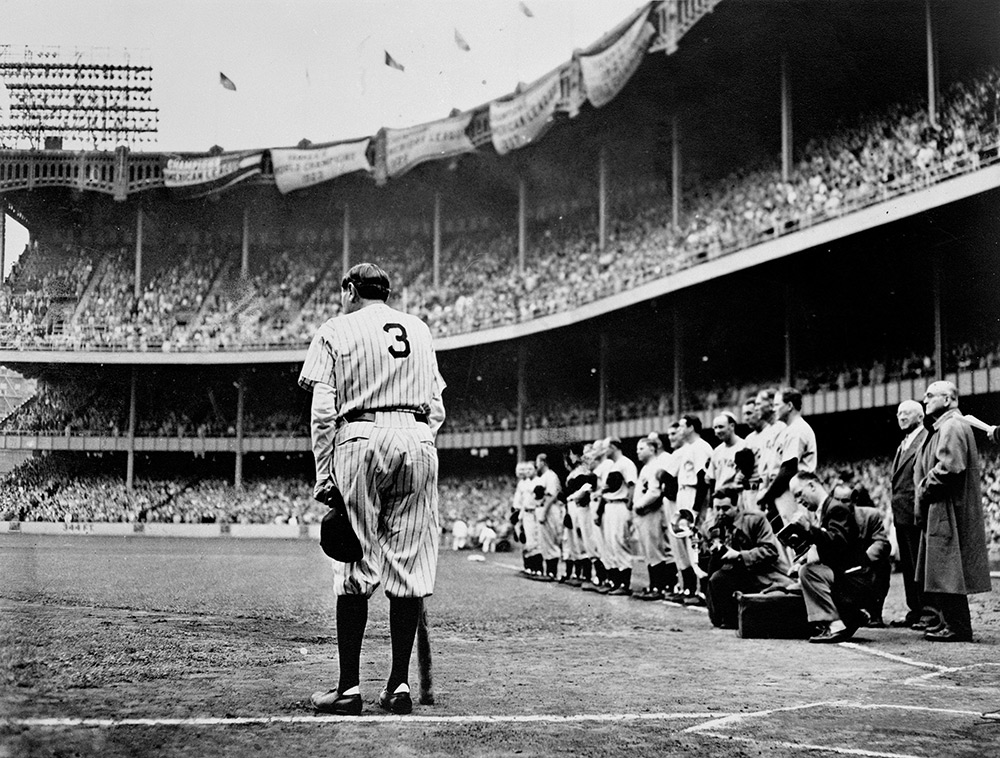 There have easily been more than a billion photographs taken of the various aspects of baseball.  From that large supply only a scarce few  are truly indelible.  Nathaniel Fein’s Pulitzer Prize winning photo of Babe Ruth bidding farewell on June 13, 1948 is one of them.  Celebrating the Silver Anniversary of Yankee Stadium Ruth’s number 3 was being retired.  He was dying from a rare form of cancer, nasopharyngeal carcinoma, had undergone pioneering chemotherapy, and was horribly frail.  Dressing in the Visitor’s Locker Room he borrowed a bat from Cleveland’s Bob Feller to use as a cane.  Staring out at a big crowd, the rafters were filled with banners from triumphs gone by the ways.  The crowd sang “Auld Lange Syne” as Fein captured the moment.  Two months later — Ruth would pass.  Today that site is a collection of sandlot baseball fields dubbed, “Heritage Fields” with few markings to indicate the history of the spot.  Towering nearby the haunts of “The House that Ruth Built” is the new Yankee Stadium disparagingly referred to as “The House that Greed Built.”  It is a safe bet that the youngsters running the bases on the sandlot fields have dreams of making it to that bright and shiny park.  Few things frame the cycle of life more effectively than baseball.

All sports rely on their young dreamers for continuity.   Since the beginnings of the game the phrase, “If you build it they will come” has rung true.   What youngster could look out on a Major League field and not imagine being on it?   Baseball as an enterprise subsisted on physical attendance fueled by multi-generational interest.  Tradition and respect for the past was a crucial element of the branding.  The kids had the dreams.  But, the parents had the dollars.  When adults went to a game, they wanted to revisit the game of their youth.   Enter television.  For about 30 years baseball viewed television as a vehicle to improve attendance.  A home game telecast was a rarity.   Breweries owned many of the broadcast ventures.  The franchises made relatively little off of the broadcasts.  Enter cable and the whole business model changed.

Ted Turner used to say that he made “…lots of money on the Braves.”  He did that by having the Braves on nearly every cable box in the country.  Attendance became a secondary and less-important form of income.  Turner had created the future business model for baseball in the form of team-owned cable sports networks and regional sports networks.  When Bud Selig began his tenure in 1992 MLB was barely a $1 Billion business in annual income.  By the time he left in 2015 the annual take was over $9 Billion.  Attendance had increased over the same time period by less than 4,000 per game.  The Regional Sports Networks fueled the profits. Give credit to Selig for one thing if nothing else: He knew when to get out.

Since Selig has left office,  attendance has dropped by 17%.  Cable’s death-grip on the television market has loosened. And, most menacing of all, the demographics indicate a decline of interest in the most important category of all for the future; the youth.

Businesses have life cycles.  Smooth sailing is a short-lived period.  There are always challenges.  Some enterprises adapt and grow.  Others rely on their traditional business model and fail.  In the 1950s, RCA was a powerhouse business; the king of the transistor.  They stuck with a business model rendered obsolete by external technological advancements.  Their decline into obscurity was dramatic.  Ditto Eastman Kodak. The same applies to too many enterprises to name.  Golf is an example of an industry that explosively went from niche status to major status…and is now well on the way back to being a niche.  It shares many of the same demographic issues as baseball.  Note that the downsizing in golf has been managed well.

So, how does the enterprise respond to these dark and ominous clouds?  To be blunt, it’s obvious the afterguard hasn’t the foggiest idea.  The search, so far, for a root cause to attendance declines has been what incident analysis consultants unkindly label an “Easter Egg Hunt.”  Last year the baseball media was saturated with stories attributing blame to the longer durations of games.  MLB leadership jumped on the bus with both feet.   Without really understanding what is at the core of the issues, the leadership has been brandishing a quiver of so-called, “Solutions.”  But, a quick look at the numbers should dispel the notion that game duration is the root cause.  In 1969 the average game took 2:28.  Today it takes 3:08 per Baseball Reference.  That looks like a compelling stat until a closer examination is conducted.  Today’s game is only 10-minutes longer than it was 25-years ago.  The real jump over the 50-year period happened between 1984 and 1994 when the game extended by 18-minutes.  What was going on then?  That was the time period with the advent of cable, the birth of regional sports networks, and the injection of major cash into the game.  Advertising time fueled the cash flow.  A baseball game went from 18-minutes of inning breaks to 45-minutes or longer.  Attendance continued to climb until 2015.  Scratch game duration from the “Smoking Gun” list.

Nearly all of the various solutions being offered by Commissioner Manfred tinker with the fabric of the game.  Moving the mound, requiring relievers to face multiple batters, instituting extra-innings changes, and several others all disrupt the game itself.  The “Unintended Consequences” are numerous.  But, perhaps most impactful would be the erosion of baseball as a timeless game.  Witness gridiron football where rules-changes by the bucket-full are an annual tradition.  The games we see on Sunday afternoons in the fall scarcely resemble those of even 25-years ago.  A few years back during the daily commute one talk show radio host had asked for a listing of the five-greatest Quarterbacks of all time.  A caller was promptly berated for listing Johnny Unitas because, “That’s Flintstones’ football, Dude.”  Baseball has so-far escaped the denigration of its past.  It has only done so by being faithful to the game.

It isn’t that baseball is without change.  The game evolves constantly.  Pitching is a perfect example.  Jack Chesbro had 48 Complete Games in 1904.  That is 6 more than all of MLB in 2018.  Not only are Complete Games almost extinct, they have now taken on a bit of a pariah status.  It takes so many pitches in today’s world to complete a game that it can alter the trajectory of a pitcher’s season.  It’s a dramatic change.  However, it was an organic one.  The game didn’t change rules to make that happen.  It happened on its own.  On the other hand, MLB has changed the baseball to improve aerodynamics.  Home Runs are way up.  It was an easy and unilateral move to “improve offense.”  (MLB controls the choice of the baseball manufacturer “Rawlings’.)  But, it threatens the integrity of historic performances.

Where this goes is impossible to predict.  But, it is undeniable that the business is facing downward pressures.  If the enterprise can’t resist the pressures entirely then it needs to be skillfully navigated to a different business model of smaller income.  The real problem comes when and if it attempts to maintain the status quo in an environment that won’t support it.  That’s how businesses flame out.  The desire to “Do something, do anything” is overwhelming.  What has been demonstrated by the brain trust so far has hardly imbued confidence that a coherent strategy is in play.

There is a delicate balance in baseball of past, present, and future that is unique and totally satisfying.  We will have to see if it stays that way.