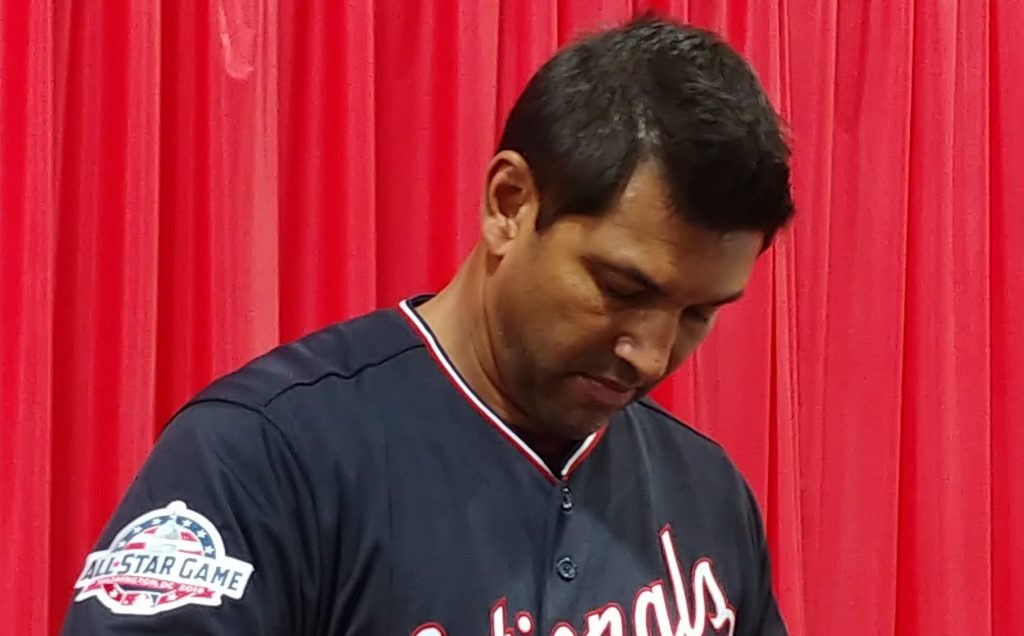 Tell us if you heard this story before — a man walks into a room and tells everyone he’s changed. That is manager Dave Martinez. During the off-season and Spring Training, he has told anyone who has interviewed him that he studied film all winter and learned a lot. He apologized for how he over-worked Sammy Solis. The second-year manager seemed to be a changed man, but when the lights came up and the show started this was the same Dave Martinez we saw last year. The same guy just a year older. He spins the stories to cover the mistakes just like before. Read between the lines of the excuses in the post-game presser below.

“We had 6 outs to get a run,” Martinez explained. “I knew [the pitcher’s spot in the lineup] would come up again. I was trying to save Matty [Adams] to face either Edwin Diaz or Jeurys Familia if we get to that spot [with runners on-base].”

No, you did not have 6 outs to get a run because you had no idea if your pitchers would yield any more runs. Also, how did he know the pitcher’s spot would come up again? There was no guarantee of that unless at least 3 runners got on base with no doubleplays. It’s simple math because Scherzer was the last out in the 7th inning. Actually it seemed to be a low likelihood since you look at career WHIP percentages of Jeurys Familia (1.207) and Edwin Diaz (1.010).

There were actually 7 outs remaining in the game when the pitcher’s spot came up in the bottom of the 7th inning in a 1-0 game, and instead of going to a thumper like Matt Adams to try to tie the game — Dave Martinez stuck with a tiring Max Scherzer to bat. After Scherzer K’d, he came out to pitch the top of the 8th inning with a pitch count of 93.

If you're not going to pinch hit Matt Adams to hit against Seth Lugo down 1-0 in the seventh, why's he here?

What a divergence between how the Mets handled their pitcher Jacob deGrom, and Martinez handled Scherzer as if this was the final game of the season and not the first.

Scherzer would trudge forward and clearly was fatigued as he admitted after the game but you could see it on the mound. He finished with 110 pitches but what if his final batter, Brandon Nimmo, did not strikeout on 4 pitches and became a tougher at-bat? In reality, Nimmo could have fouled off several pitches. His pitch count concluded at 110 pitches but every extra inning also includes the rigors of warm-up pitches between innings. Scherzer could not even qualify for the win since he was yanked from the game mid-inning with his team losing. At that point he could only hope for a no-decision in the best case.

The same ole Davey said he was trying to give Scherzer the chance to get the win. In a game where individual wins should not matter, this manager once again said it mattered. It was “individual over team”. Trevor Rosenthal warmed up and was never used. Scherzer’s walked-batter in the 8th inning scored, and the one run deficit turned to two runs.

Instead, Dave Martinez was willing to fatigue his ace pitcher on Opening Day to try to statistically give him a chance to get a “W” and instead he got the “L” and a fatigued arm was the end result. Was it worth it in hindsight Davey?

“…I was trying to give [Max Scherzer] a chance to stay in the game, win the game, and I knew we had six outs with our top guys coming up to hit.”

It should also be noted that Trevor Rosenthal began warming up during the bottom of the 7th inning to be ready to pitch the 8th inning. Scherzer was at 93 pitches and was tired. Scherzer walked pinch-hitter Dominic Smith in the 8th inning, and of course he scored. We’ve seen that before.

“I did [feel] fatigued kind of there in the eighth,” Max Scherzer said. “I could feel I was really hitting a wall at the end and was able to just execute some changeups late there in the eighth to get some strikeouts. That was the end of my line right there.”

What was gained by all of this? Baseball is a marathon and when you sprint out of the gate it’s never a good thing. Scherzer should have 31 starts ahead of this and hopefully more if the Nationals make the postseason. 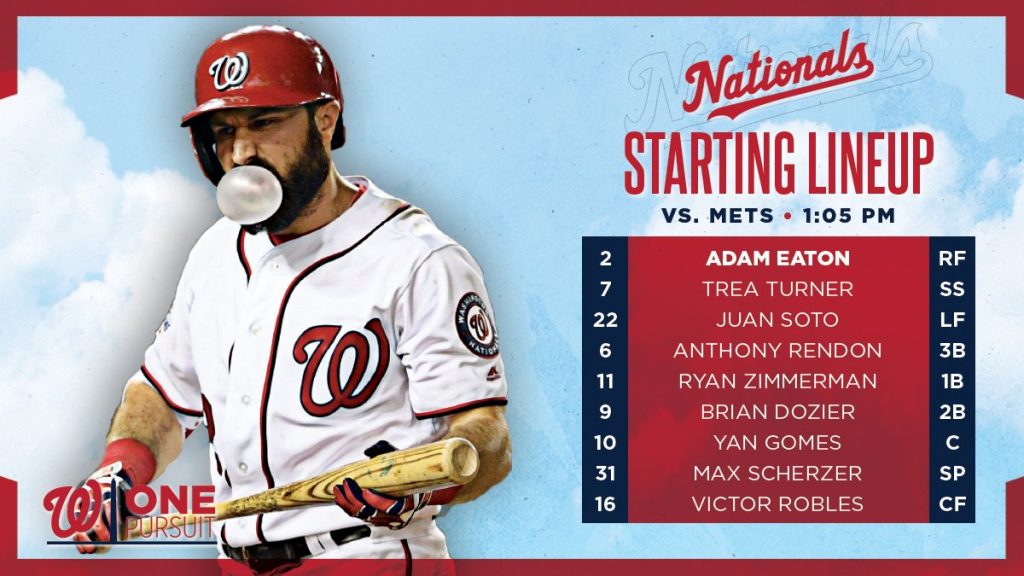 There was also the analytics of the game. Someone switched the batting order as you can see from the graphic above. Juan Soto was supposed to be batting 3rd and he was flip-flopped with Anthony Rendon when the official batting order was released. We can debate all day long on whether Ryan Zimmerman should have faced deGrom or the hot hitting Matt Adams who had homered in his previous 3 games.

The batting order seemed to matter, but give credit to the reigning Cy Young winner Jacob deGrom as he made some big pitches in some big spots. The Nationals had 7 RISP chances and came through once when Adam Eaton smoked a low liner to rightfield which could not score Victor Robles who had to hold up in case the ball was caught.  It was that type of day.

But you have to look at the heart of the order. They had their chances. Both Anthony Rendon and Ryan Zimmerman came up with 2 chances each with runners-in-scoring-position and came up empty. Zimmerman smoked a low liner to 3rd base that was caught, and Rendon extended his poor hitting against deGrom with the 0-3 to a 2-26 results. 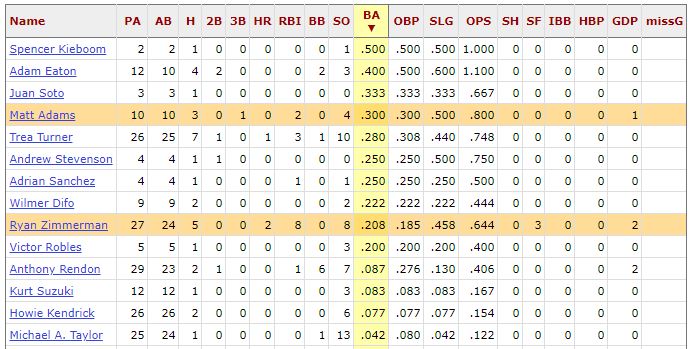 This entry was posted in Analysis, DaveMartinez. Bookmark the permalink.
← Previous Article | Next Article →