Trea Turner had over two dozen Cobras at the park! 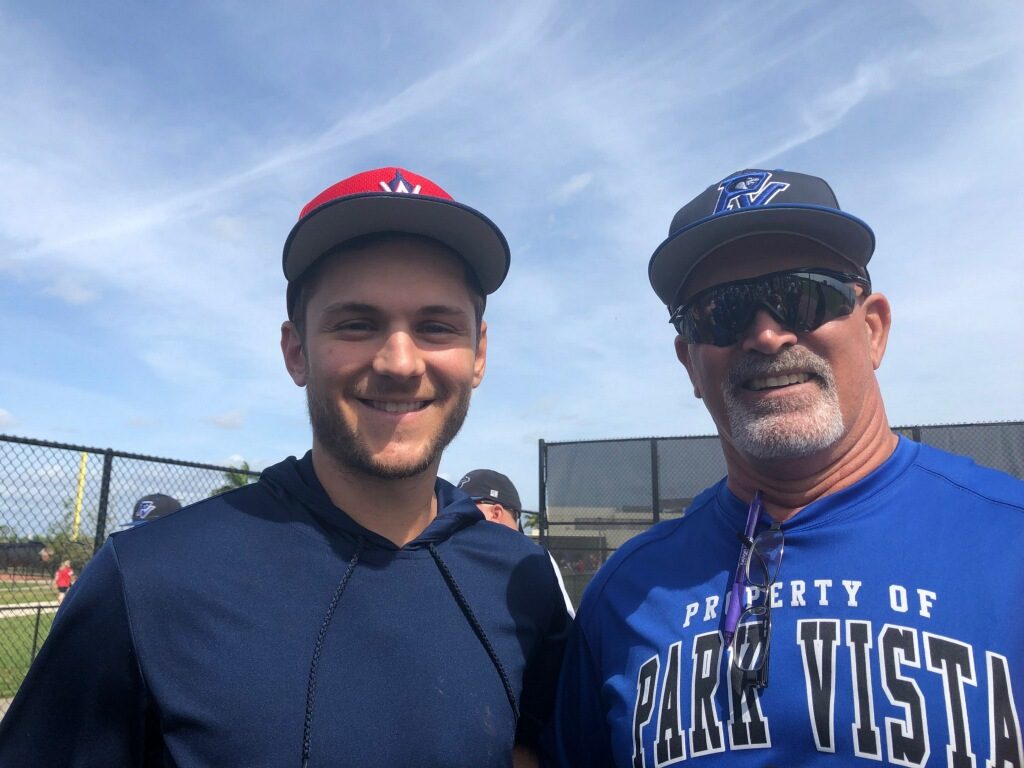 When Trea Turner attended Park Vista High School, he wore jersey #3 and was skinnier than he is now. He had a quick bat and quicker feet, and a heart of gold back in 2011 at PVHS. Not much has changed with Trea besides the MLB success and the size of his muscles and his bank account. Being a star player does have its perks as Turner needed about 35 tickets to accommodate all of the players and coaches from his old High School and the Washington Nationals made that happen. The PVHS Cobras still have many familiar faces including Trea’s high school head coach Larry Greenstein. The Cobra players received the red carpet treatment with a behind the scenes tour and time on the field with Trea. Days like that go a long way for these kids to see what is possible.

Park Vista had their own game later that day in Ft. Lauderdale, but certainly took advantage of the 15 mile drive from their school to the FITTEAM Ballpark complex.

“I really appreciate the Trea Turner and the Nationals for inviting Park Vista [High School] out to the park today,” Greenstein said. “Thank you for giving our athletes an experience of a lifetime.”

It did not take long in the bottom of the first inning for Trea to launch a booming two-run home run to get his team on the board. Later in the game Trea was on second base and tried to show off on an infield grounder as he sprinted to third base and then headed home as the throw was made to first base — only the first baseman was paying attention and fired the ball behind Turner, and he was thrown out in a rundown.  That was a lesson to the Cobra players on being too aggressive on the basepaths.

“Been thinking about doing something like this for a little while now,” Turner said. “I was talking with some people about the idea of bringing them out to the stadium to see a game and get a chance to talk to them.”

“It’s great because I feel that they can learn at a younger age than I did. Not too long ago I was in their shoes, and getting a chance to come out to a facility like this would be great to try to learn some baseball and have some fun.”

This video is great as the Cobra players gave him a standing ovation after the home run. 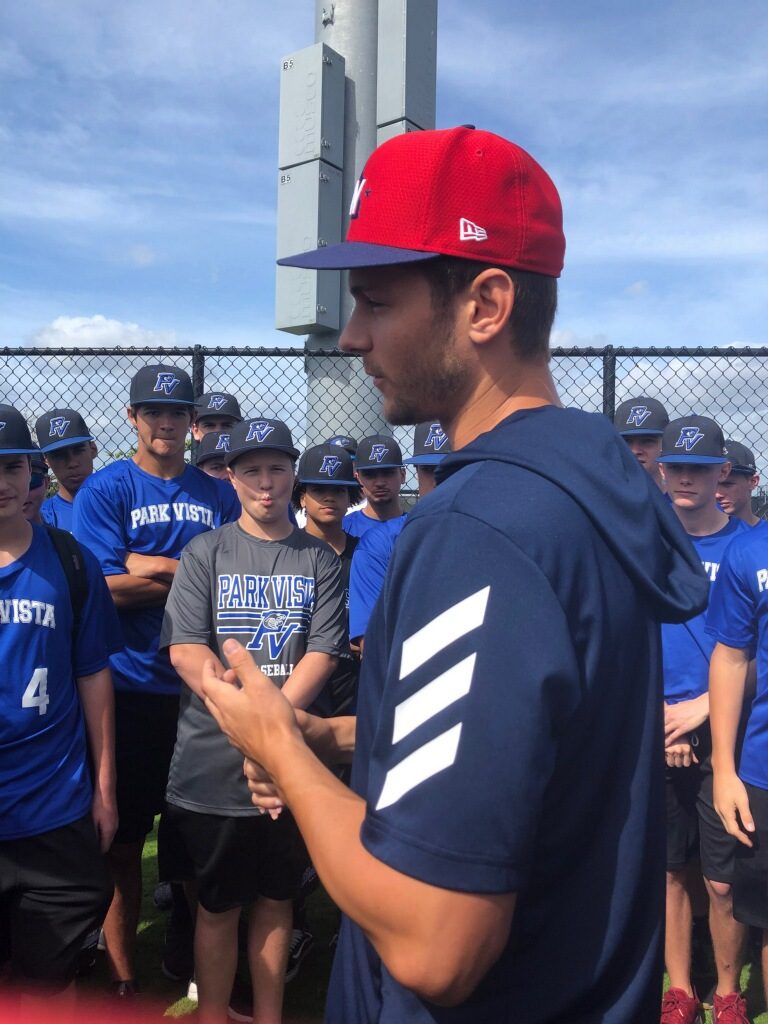 Later that afternoon, the Park Vista High School Cobras varsity team had a game to prepare for in Ft. Lauderdale starting at 7pm which PVHS lost 2-1 against  St. Thomas Aquinas on a walk-off. Nolan Schanuel and Taylor Clapp are this year’s star players for the Cobras. 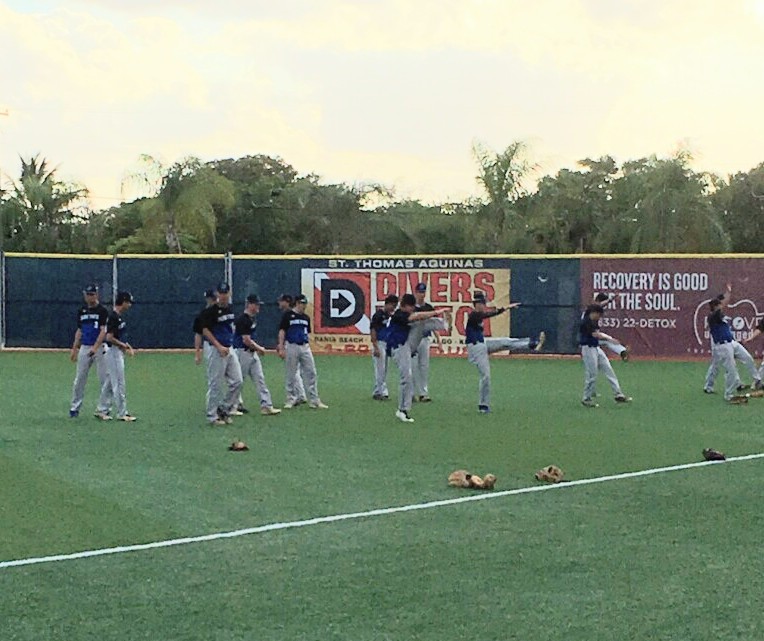 Many of the Park Vista kids are college bound with baseball commits if they are not drafted. Greenstein and his staff have been turning out very good baseball players for a while.

“We were ecstatic about going out to watch Trea play as Greenie read us the email that we were invited,”Schanuel said. “He’s a legend here. He was once in our same place at Park Vista. Our coaches always told stories of Trea and his 6.3 speed and always hustling and that he once hit a home run off the scoreboard at NC State.”

“Trea told us the story at the field about facing Jose Fernandez back in the Florida playoffs. I thought it was insane. It’s amazing how the game was tied and the game came down to the last inning and last pitch.”

Nolan Schanuel verbally committed to FAU for baseball last year and will graduate next year. He is batting over .400 and plays the outfield and first base. With some more progress who knows what his future in baseball will be. The one quote from Trea that will stick with Schanuel is about the world you live in with social media.

“When you think you’re alone — you’re not — someone is always watching,” Turner told the kids.

True words as you are out in the public but also on the field as you never know if a scout shows up unannounced or was there to watch a player on the other team.

You will notice that no player is wearing jersey #3 on the Cobras, and no player has worn it since Trea Turner graduated. As long as Greenstein is coaching the team, nobody will wear it again.

“Trea wore number 3 at Park Vista, and no one has worn it since,” Greenstein told us. “At Park Vista we’re just so proud of how Trea has progressed as an adult and becoming a top MLB player, but he’s still good ole Trea Turner.”

If you do not know Trea’s story in high school, read this about his showdown with Jose Fernandez in the Florida high school playoffs.

“I can remember many games that we played, from my first all the way to my last, and how we got there with practices,” Turner said. “It makes me appreciate where I’m at and have that satisfaction that I put the work in and continued to try to grow [as a player], and I think it started there at [Park Vista].”

One thing for sure, the road was not easy for Turner who was not a highly recruited high school player as only the Pittsburgh Pirates looked at him, and as a low level draft pick he took a scholarship to North Carolina State where he put together the speed and hit tool and became an elite prospect. Perseverance and hard work paid off for Turner and hopefully will for other Cobra players.

This entry was posted in Feature, Turner, Uncategorized. Bookmark the permalink.
← Previous Article | Next Article →