Most baseball evaluators knew before the Florida High School 6A playoffs in 2011 that Cuban defector Jose Fernandez was going to be a 1st round draft pick. Nobody knew at that point in time that Trea Turner would also be a future 1st round draft pick and would actually be picked earlier in his draft as the 13th overall pick compared to Fernandez who was the 14th overall pick in his draft.

Fernandez was being clocked at 98 mph on his fastball for Tampa’s Alonso High School. Ninety-eight mile per hour heaters for a high school kid get scouts salivating plus Fernandez was a very good hitter in the clean-up spot. Scouts who attended the Florida state high school 6A semi-final playoff game on May 23rd of 2011 went to see Jose Fernandez and also got to see Park Vista’s lead-off man Trea Turner who had already committed to NC State. Notes were jotted down by the scouts because you never know who can be discovered at a high school playoff game as there were several promising  under-classmen in the game from Park Vista like Tyler Kendall, Robbie Coman, and Brett Lashley and many more who all graduated the following year and went on to play college baseball, and the other Trey (Amburgey) was drafted by the Yankees last year.

After the game, there was not one scout who approached Trea’s coaches or parents. The scouts were all fixated on Fernandez and his baseball heroics of that day with his arm and his bat. The very skinny kid wearing the #3 jersey for Park Vista who almost hit for the cycle off of Fernandez faded into the distance like an after-thought in the way a Hollywood extra is in the background behind the star.

From Matt Porter of the Palm Beach Post, this is what the line-up card and stats looked like on that day in 2011:

When Trea Turner entered high school as a freshman, he was just 5’4″ tall and was on the JV team, and over the next four years, Trea sprouted up 9 more inches to 6’1″ and added longer strides and more pop from his bat.

“I promoted Trea near the end of his sophomore season to varsity to play with guys like Cody Dent, and Trea made a real impression,” said Larry Greenstein who was Trea’s high school coach. “He really had the tools to be a very good player and as he matured he really showed that he was a top shortstop.” 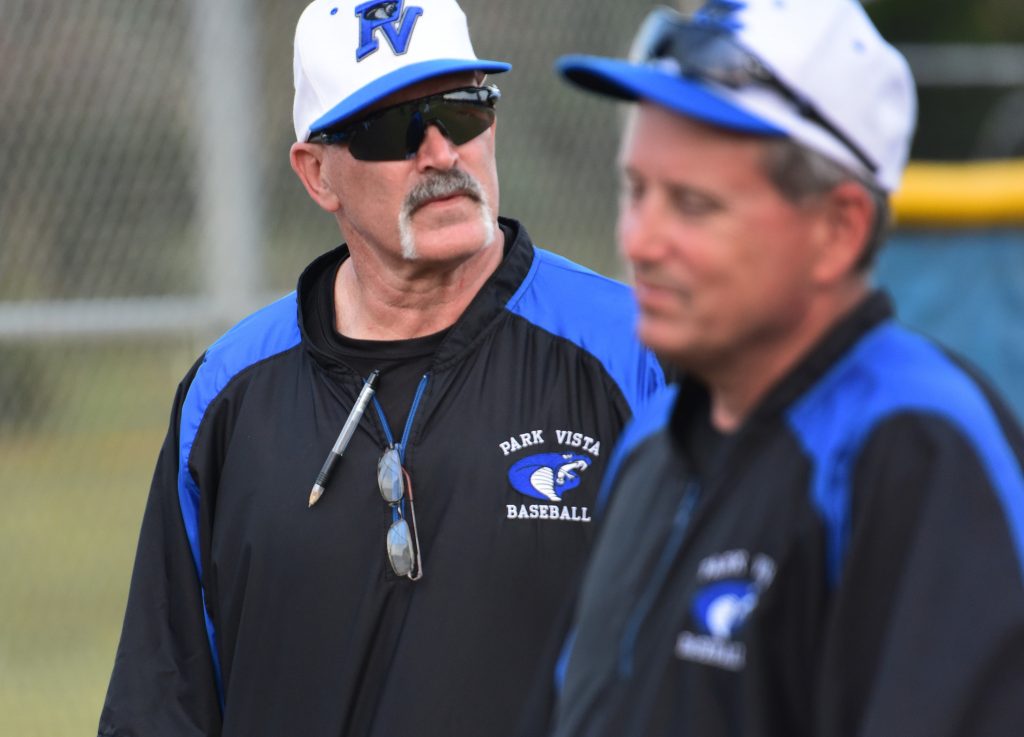 Trea can be looked at now as one of the best players from Palm Beach County but in baseball rich Florida, that didn’t matter much to MLB scouts other than Rolando ‘Roly’ Pino of the Pirates organization who Greenstein was in contact with, and they drafted Trea out of high school in the 20th round. The speed tool was always there, and Pino saw the hit tool, and some slick defense as well. Pino himself was a middle infielder and liked what he saw in Turner, but choosing Trea in the 20th round with a sizeable bonus was not enough to get Turner to walk away from his college commitment he made to Coach Elliott Avent of NC State. Trea Turner didn’t even have many big colleges calling until his travel coach asked for a favor to someone he knew with NC State. The players who seemed to get the most notoriety from Trea’s high school team were probably Robbie Coman who went to University of Virginia and  Tyler Kendall who played for Penn State, but Greenstein was quick to point out that having the most buzz doesn’t mean you are the best player.

Before the match-up with Tampa’s Alonso High School, Trea hit his only high school home run to help beat Flanagan High School and the rights to play Alonso HS in the semi-finals. Everyone expected Jose Fernandez would dominate Park Vista whose players had never seen a live pitcher throw 98 mph before as few amateurs ever do, but Park Vista’s coach Greenstein had an idea that he could simulate Fernandez by moving the pitching machine at the Park Vista field 35 feet from home plate, but it didn’t feel right and their pitching machine could not go much beyond 90 mph.

It was Mark Turner, Trea’s dad, who had the suggestion to go to a specific batting cage that had a pitching machine that could go as high as 100 mph.  It was actually a video pitching machine that has a visual image of a righty or lefty pitcher (whichever you desire) on a screen, and a slot in the screen where the pitcher’s hand would be to deliver the pitch. Greenstein said he would crank up the velocity, and the speed would be shown numerically on the screen. He set the pitching machine initially in the low-90’s and then notched it up to the machine’s maximum of 100. You could hear the ball whiz by, and any swing and miss would leave a thumping sound as the ball crash landed on the padding in the back of the cage.

Greenstein said several players took a while to time the pitches, but Trea was all over the 100 mph pitches and was actually barreling them up.

“I knew Trea could run,” Greenstein said. “I knew he could play defense. I had no idea he could square up 100. His hands were great. It was one of the most impressive things I had seen from Trea. He barreled up every pitch.”

By defeating Flanagan H.S., Park Vista would get that game to face Fernandez as the nationally known phenom for Tampa’s Alonso High School. This Class 6A state baseball semifinal game was a dream for the Park Vista players to be able to say they faced ‘The’ José Fernandez as every high school player in Florida knew who he was plus the stands would be full of scouts.

The game did not start well for Park Vista as Alonso went up 3-0 in the top of the 1st inning. In the bottom of the 1st inning, Trea Turner was the lead-off man and Fernandez was dotting fastballs. Turner fouled one off and it cracked his bat which is a rarity with aluminum bats. Trea got a new bat from his dugout, and in the 3-2 count, Turner smashed a heater from Fernandez that he lined off of an advertisement on the outfield wall at Tradition Field for a stand-up triple. Tradition Field is the Spring Training home of the New York Mets which gave the players a nice batter’s eye to see the pitches better than they could in the simulated batting cage. Greenstein’s idea was working as the Park Vista kids were able to make contact with the 98 heater. Later, in the bottom of the 1st inning, Turner would score on a deep Sac. Fly to get Park Vista on the board!

Trea Turner got up again in the second inning, and this time he hit an RBI double to make the score 4-3 in favor of Park Vista. Turner now had a triple and a double. Fernandez wised up and started to mix in his 87 mph breaking pitch that Greenstein said looked like it was going to hit his right-handed batters in the head and it would take a left turn in for a strike.

“In Florida, most varsity players can hit a fastball,” Mark Turner said. “They see velocity all the time growing up. Pitchers need a second pitch down here.”

Mark Turner was correct of course, and with Fernandez mixing up his pitches, it kept the score at 4-3 through the 4th inning. In the bottom of the 4th, Turner flied to left-field with the Alonso H.S. left fielder making a great sliding catch on him for the third out in the inning.

In the 6th inning, Turner got his single off of Fernandez to give him 3/4th’s of the cycle and just needed the home run to complete it which is a rarity even for High School baseball in a 7 inning game. More importantly, Park Vista went up 5-4 in the game and was in position to win the game entering the final inning. In a storybook ending, it was Jose Fernandez who hit the home run to win the game for Tampa’s Alonso High School, and Turner would not get up to bat again in the game as Fernandez would get through the 4-5-6 hitters quickly to save his own win in a complete game win.

From the Tampa Bay Times after the game, Eddie Daniels wrote, “Despite hitting 98 on a radar gun inside the stadium and consistently being in the 97-mph range with his fastball, Fernandez gave up 10 hits to a Park Vista team ready for the challenge.”

“I’ll say it again, that was the toughest team that I’ve faced,” said José Fernandez after the game in 2011.

Fernandez’s final line on the day against Park Vista was 10H, 5 ER, 5K, 1BB. Trea Turner had 3 of those 10 hits, and Turner was robbed of that fourth hit that left fielder Dylan Gross caught while diving for a low liner that possibly could have been an inside-the-park-home-run if it got by Gross and would have completed the elusive “cycle”.

While disappointing for Park Vista the way their season ended, players like Trea Turner have their sights on bigger prizes, and Coach Greenstein continues to assemble Park Vista rosters hoping to find his next special player for a chance to win the 6A states!

Greenstein was with Trea’s family at Marlins Park this week to watch Trea start in centerfield for the Washington Nationals which Greenstein described as surreal. Tuesday night’s game with Jose Fernandez and Trea Turner brought back those old memories from the 2011 season, and Coach Greenstein shared another thought that this 2011 team led by his senior shortstop did not start off great in 2011, but finished the season on a great run to get as far as they did which is what he remembers fondly as one of his favorite teams he ever coached. 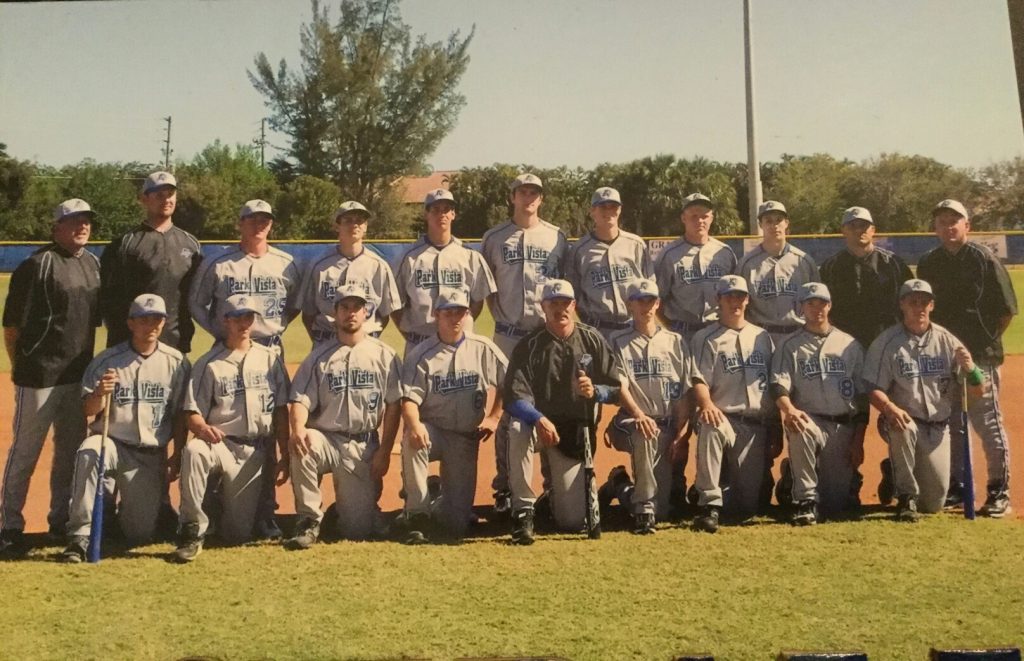 Photo courtesy of Coach Greenstein. Trea Turner is pictured in the back row and is the 2nd player in uniform from the left.

On Tuesday night, Trea Turner was able to face Jose Fernandez for the first time in the Major Leagues. Fernandez got the better of Turner in all three at-bats, but there is a reason you play the games, and they will face each other many more times in the future and in 15 years we will see if the Park Vista kid got the better of the Alonso kid or vice versa. 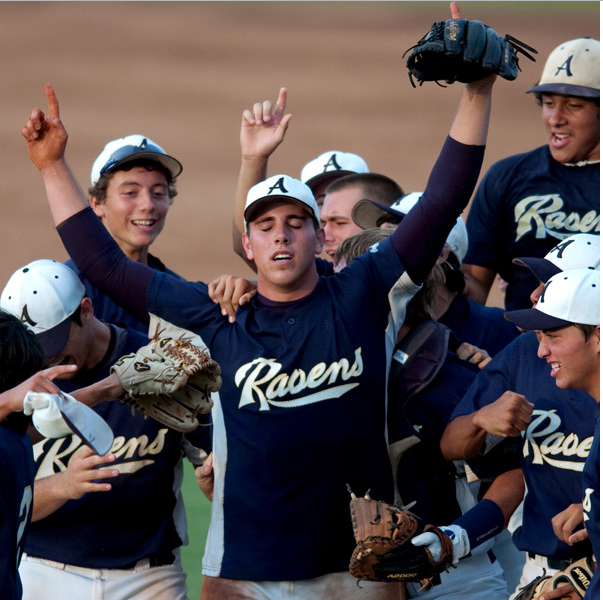