Game #19 Nats head to Fort Myers for a game with the Twins! 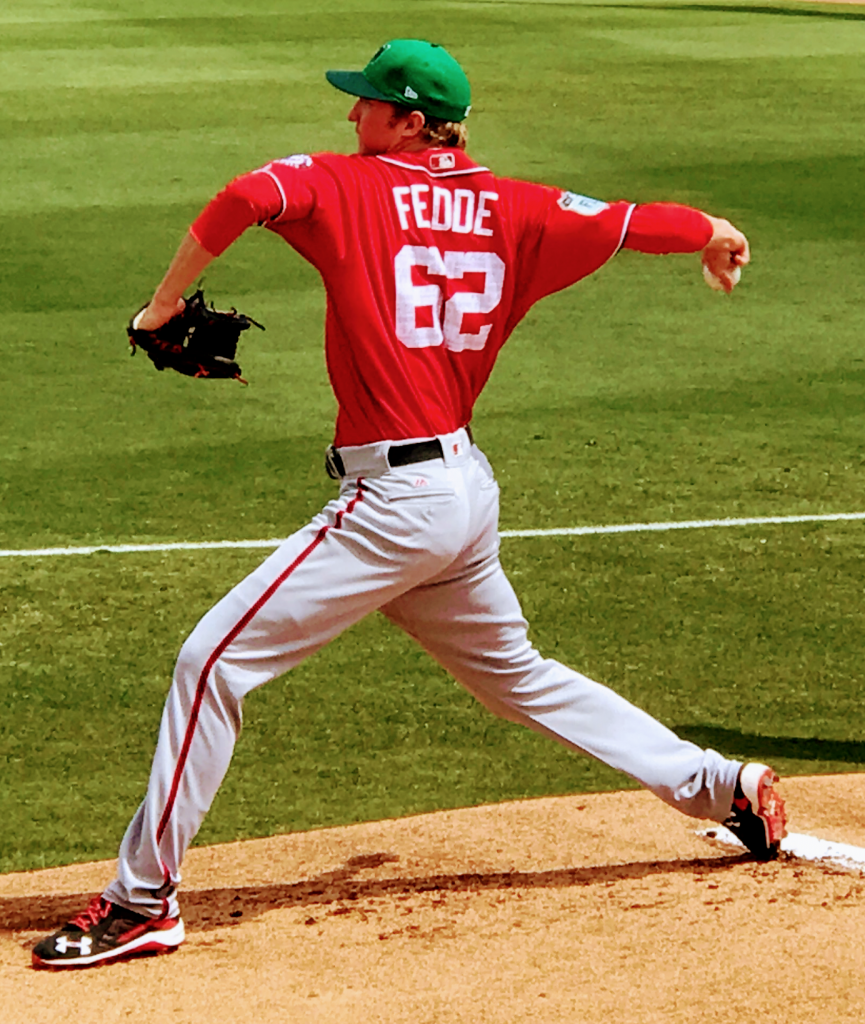 Who wants to wake up at 6 a.m. to get ready to drive to the FITTEAM BOTPB to load up on a 7 a.m. bus to then drive across one of Florida’s East to West routes to the Gulf Coast of Florida —  then head north to Fort Myers to the Spring Training home of the Minnesota Twins.

These long bus rides are something the highly compensated veterans gave up long ago when they were minor leaguers who endured the endless rides from small town to smaller towns on charter buses and stayed at Red Roof Inns.  When you make “The Show” you ride on charter jets and stay at Ritz Carltons. Life as a Major Leaguer is a privileged life, but most who made it to the bigs — paid their dues. So when you are faced with one of those 3 hour bus rides, you tell the boss you would rather stay back and pitch to minor leaguers.  Yes, Anibal Sanchez‘s spot is due today in the rotation, and he will stay behind to pitch on Field #1 along Military Road on the back fields in West Palm Beach while Erick Fedde rides that bus to pitch for the Washington Nationals in Fort Myers.

Someone has to do it. The show must go on, and plenty of players will beg to play in that game to impress manager Dave Martinez and any scout in attendance. You just never know when your big break will come, and proof of that is Clint Robinson who was a career Minor League journeyman with 13 combined career games on his MLB stat sheet and a .231 career batting average before he signed as a Non-Roster Invitee with the Nats. Clint Robinson was the guy making the long bus trips with manager Matt Williams in 2015. Along the way, Robinson impressed the brass. He made the 2015 roster and played in 230 career games over 2 seasons with the Nats. CRob earned well over $1 million dollars too.

Who doesn’t enjoy an underdog story? Clint Robinson was one of the rare ones. Don’t expect Jake Noll to make the Nationals roster on Opening Day or for that matter Carter Kieboom, but maybe both can be callups in 2019. Who knows if Vidal Nuno will even make the roster. When Sammy Solis was released this week, it was Nuño who looked like his replacement, but that was short-lived after the Nats signed free agent Tony Sipp who will be the seventh new face along with Patrick Corbin, Brian Dozier, Trevor Rosenthal, Yan Gomes,  Kyle Barraclough, and Anibal Sanchez on the roster plus the return of familiar faces like Kurt Suzuki, Jeremy Hellickson and Matt Adams. All together those players cost  over $200 million in salaries/incentives!

Sure, it is still possible that Nuño can make the roster as he battles for that final spot with Austen Williams, and Wander Suero who both have options remaining. When Sipp was signed, Nats Twitter got busy. Everyone knew what “good” Sipp would mean to the Nats.

Leave it to Sean Doolittle to sum things up as he also knew what a Tony Sipp signing would mean to this Nats’ team, and Doo still holds out hope that Mark Lerner approves a Craig Kimbrel signing. If you did not read about how Doolittle would give up his primary closer’s role to Kimbrel, you should give it a read. In the meantime, the Nats have Doolittle, Rosenthal, Barraclough, Justin Miller, Matt Grace, Sipp, and one remaining spot remaining in the Nats ‘pen.

“…[Tony Sipp] is going to have his work cut out for him,” Doolittle said. “Welcome to the NL East. Here’s Harper, here’s Freeman, here’s Cano.”

Each NL East team has that prolific lefty batter except the Marlins so lefty specialists are needed for sure. The Nats have Juan Soto, the Braves still have Freddie Freeman, and the Mets added Robinson Cano, and we know who the Phillies added. General Manager Mike Rizzo made the right move to get Sipp.

“I think that [Sipp] balances our bullpen out,” Rizzo said. “He’s had success in big moments. He’s been in the playoffs and had success. I think that not only with our division but just in general, I think he’s a sound relief pitcher. And he gets righties out, too. Let’s not forget that.”

Sipp, 35, had a career year last year for the Houston Astros. His age probably scared away teams. Other teams were scared off thinking that maybe 2018 was an outlier after some tough years before that. Rizzo and his staff believe Sipp can repeat what he did last year. If Tony Sipp can repeat what he did in 2018, he will be one of the bargains of free agency. The lefty will be paid a $1 million salary and a $250,000 mutual option buyout.