A day of fundamentals in #Nats camp

Posted on February 21, 2019 by ArVaFan aka Laura Peebles 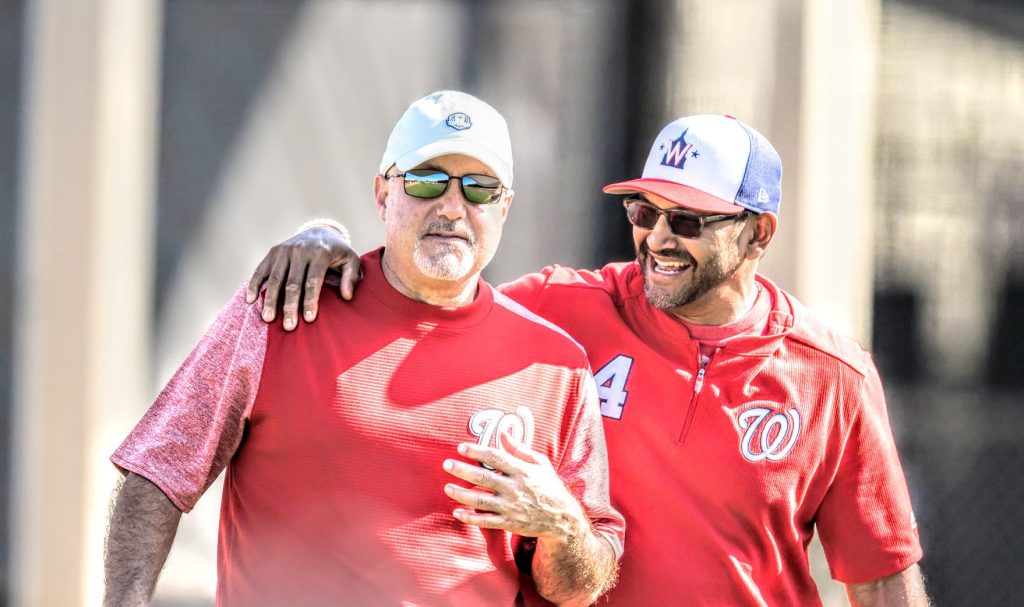 Apparently I look like I know some stuff. Fans, stadium staff, waiters and others asked me a lot of baseball questions today. (Unfortunately, more than half were about he-who-is-still-not-signed).

Today was billed as “fundamentals day” at Spring Training. I certainly saw some fundamentals drills. There was the usual Circle of Trust, and then a lot more standing around and listening before the players broke into groups to do the drills. Here are the fans waiting for something to happen. 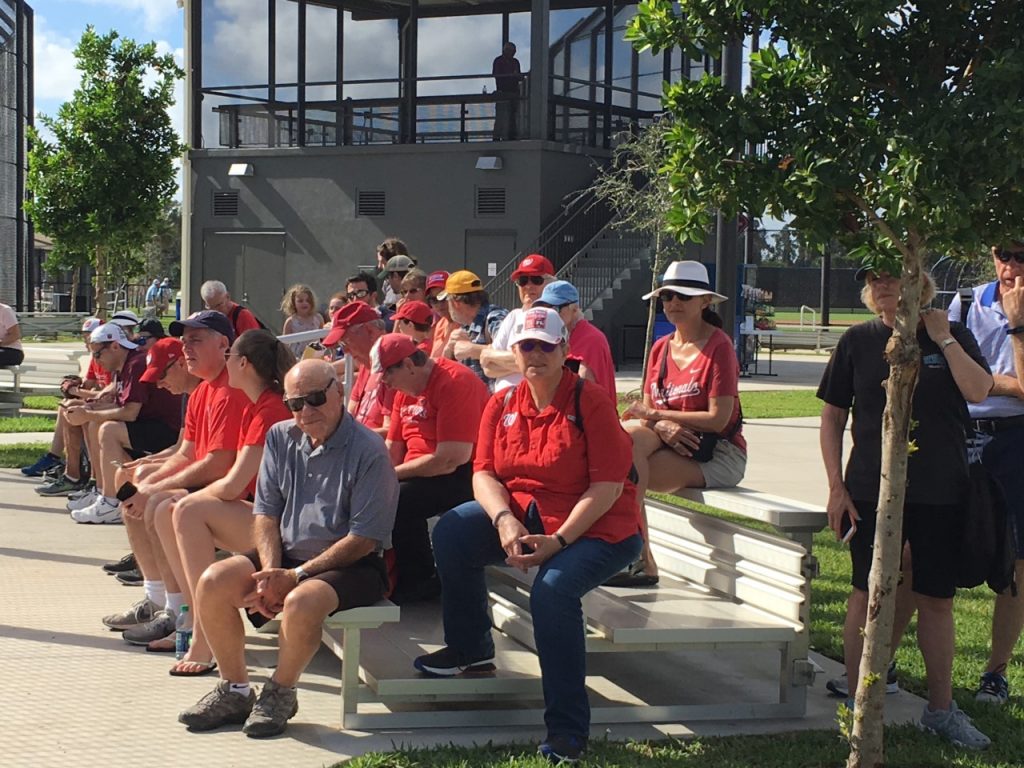 They started with baserunning drills: (1) run hard to first, (2) run to first, walk to second, (3) take a lead off first, run to second, (4) run to home from second, (5) run hard from third. There was a certain amount of celebrating by certain players (i.e., Soto, Eaton) as they crossed home plate. The “run to first, walk to second” drill reminded me of the way a train hooks up (by colliding): players had to slow down rounding first or risk running into the next player. Howie Kendrick ran the drills the same as everyone else did. 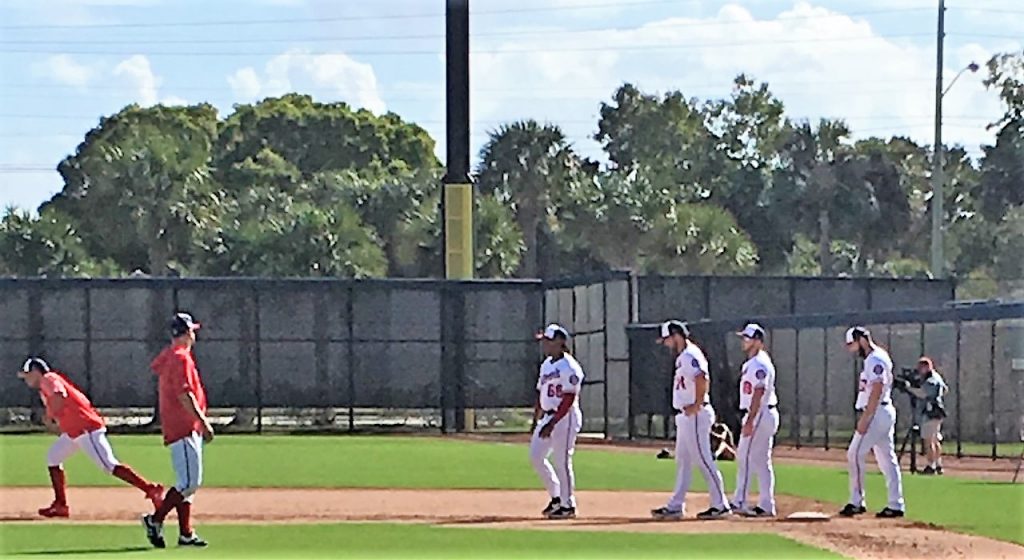 The pitchers did a lot of stretching (including a number of recognizable yoga poses) and long toss while that drill was underway. 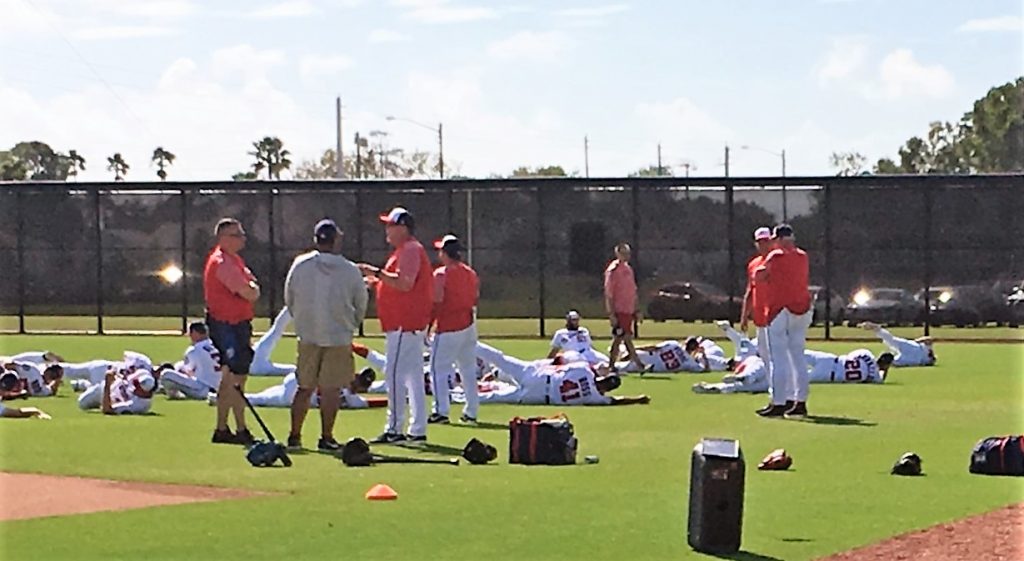 There was another round of fielding grounders at first and third. Howie, Zim, Adams & Marmolejos at first; Wilson, Noll, and Anthony at third. One difference between this year’s drills and prior years was the coach calling “backhand” or “forehand,” telling the player how to pick the ball. I don’t remember that from prior years (although maybe I just didn’t notice).

Then there was what I call the “I got it!” drill. The pitching machine was set to create popups. A pitcher runs to the mound, pretends to pitch, the machine sends a ball skyward, and the closest fielder of the eight or so out there yells “I got it!” very loudly, and (almost always) catches the ball. There was only one collision (not serious).

Pitchout and pickoff practice with Strasburg and other pitchers included going over the signs and timing (sorry, I’m not going to list the signs—besides, they’ll probably change them by the real season).

Then they did batting practice. (Apparently, they did all the drills correctly so Dave Martinez didn’t require any do-overs). As usual, they started with a couple of bunts. Of the group I watched (Zimm, Howie, Eaton, Rendon, Robles, Sanchez) only Eaton could consistently lay down a bunt. After the practice was over, the hitters picked up all the loose balls—they didn’t leave them for the coaches or crew. There were a few BP homers sending the kids behind the fence scrambling for them. Rendon was a real live wire today: teasing the batting practice pitcher about his pitching (“you scared me” on a close pitch), and joking with his teammates. Robles hitting: 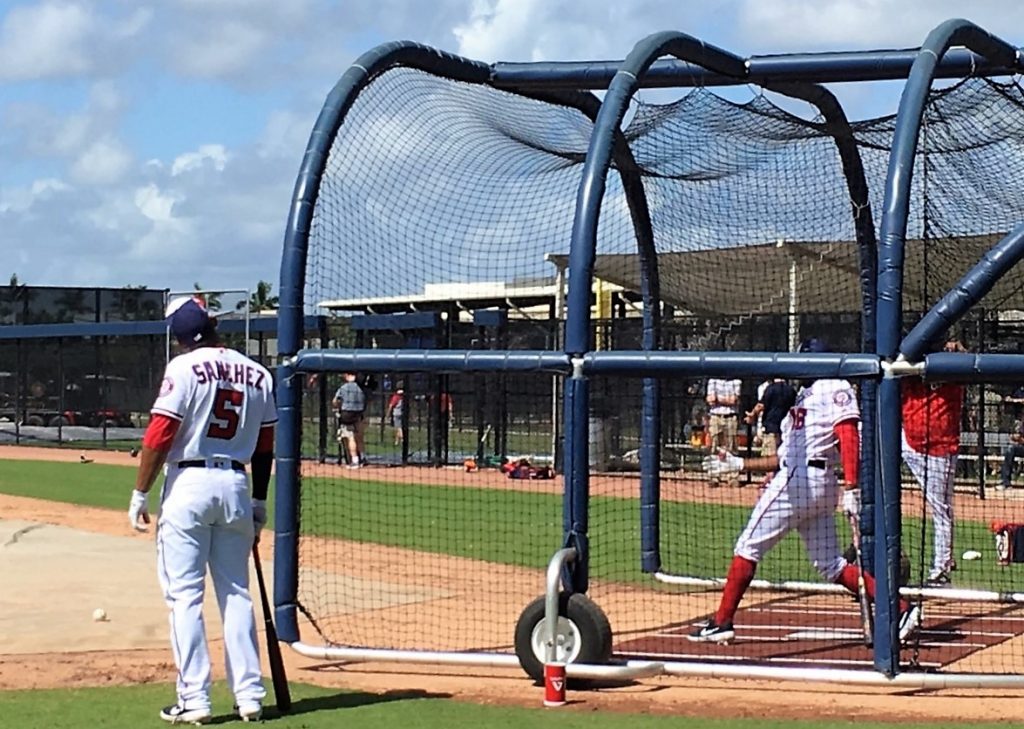 Speaking of kids, B-Man (Adam Eaton’s kid) made a cameo appearance in the outfield. Most of the time, he managed to throw the ball in the bucket, and at one point he tried to carry the bucket (wait a couple of years, kid).

In the batting practice photo, notice the “instant” home plate: they roll that out like a doormat.

Random note: only Spanish heard so far was Raudy Read giving directions to one of the pitchers.

Other random note: here’s the protective netting on Military Trail. Victor Robles hit one over that last year. 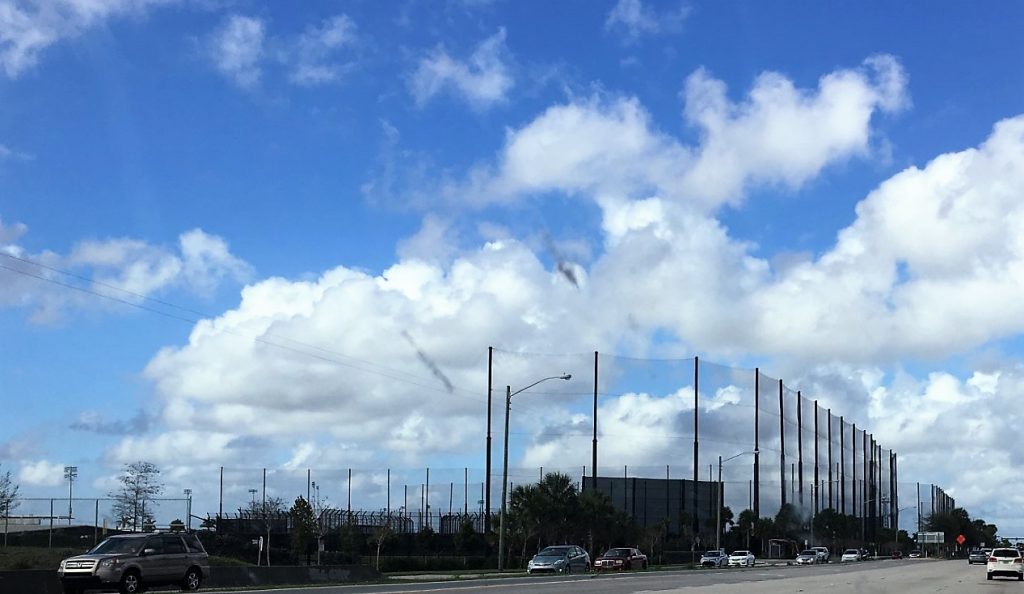 Non-baseball note: on the way home, we saw several turkey vultures sitting on the edge of a golf course. Given that this is Florida, I assume they were waiting for golfers to die.