The last day of Spring Training before the games begin! #Nats

Posted on February 22, 2019 by ArVaFan aka Laura Peebles

February 22 Spring Training: Mark Lerner causes a splash about his statements regarding “no contact” with Bryce Harper or Scott Boras in months. Launch the conspiracy theories. 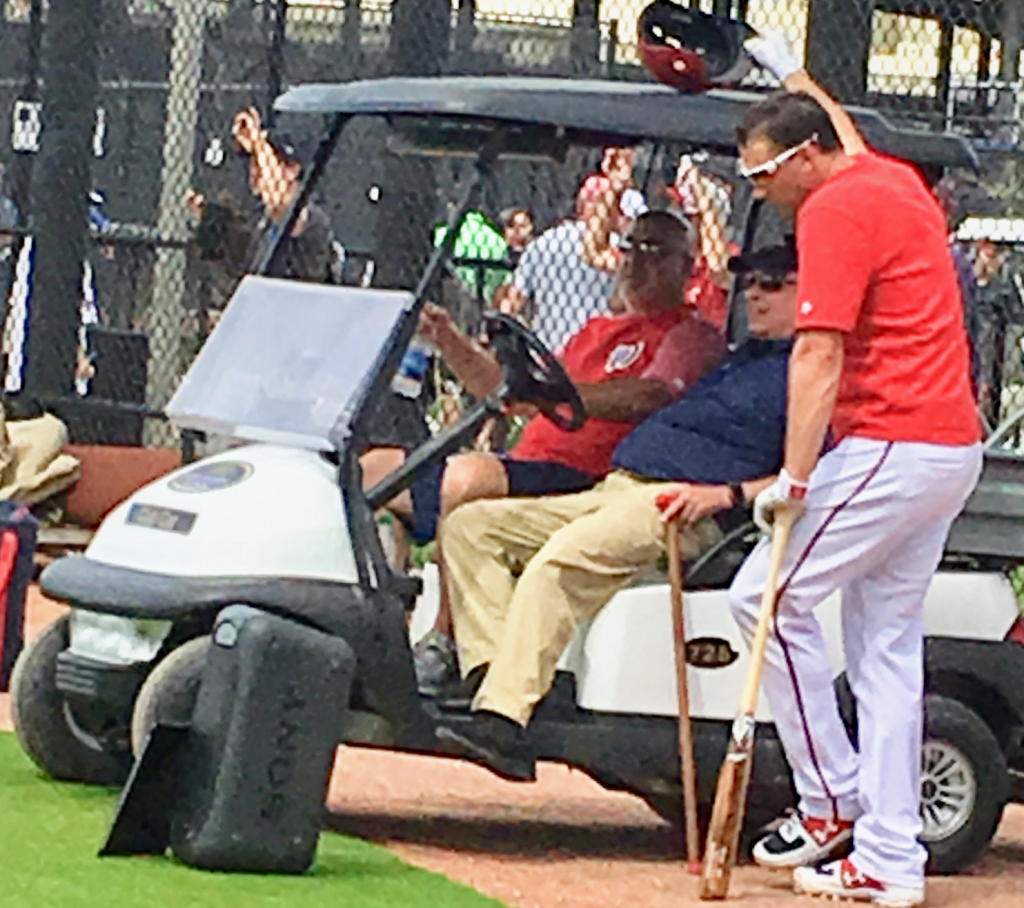 Whatever they were talking about, it probably wasn’t he-who-hasn’t-called-in-months.

The day started with the Circle of Trust as usual. There was a lot of laughter and cheering. Henley wrapped up with a joke. Note that the pitchers always seem to be in the back row, but I think that’s just because they’re generally the tallest group.

Pitchers headed off to the fields to warm up since they would face live hitters today. Spouse said, “This looks like camp with a counselor in front and in back of each group.” Tim Bogar responded “Yep, no stragglers.”  I said “must be easier without Gio to keep track of.” Response, “Yep.”

Watched the stretching and agility drills.  Can’t say that Spenser Kieboom is all that agile—at least not compared to some of his teammates. Today it was Howie who was out of sync with his teammates—facing the other way doing different stretches. Eaton was blowing bubbles while doing the drills, so yes, he can balance and chew gum at the same time. Howie and Eaton were both doing stretches that I couldn’t do since I was their age (i.e., balancing on one leg while doing stretches). Lots of hamstring stretches for the group today: at least they’re trying to prevent injuries. Yan Gomes was back in camp today after being out for a couple of days with apparent food poisoning.  He looked great today, literally skipping rings around his agility group to start out the routine. At one point, Ryan and Read went off to the next field for a few minutes for a separate drill of some kind, but they rejoined the group. 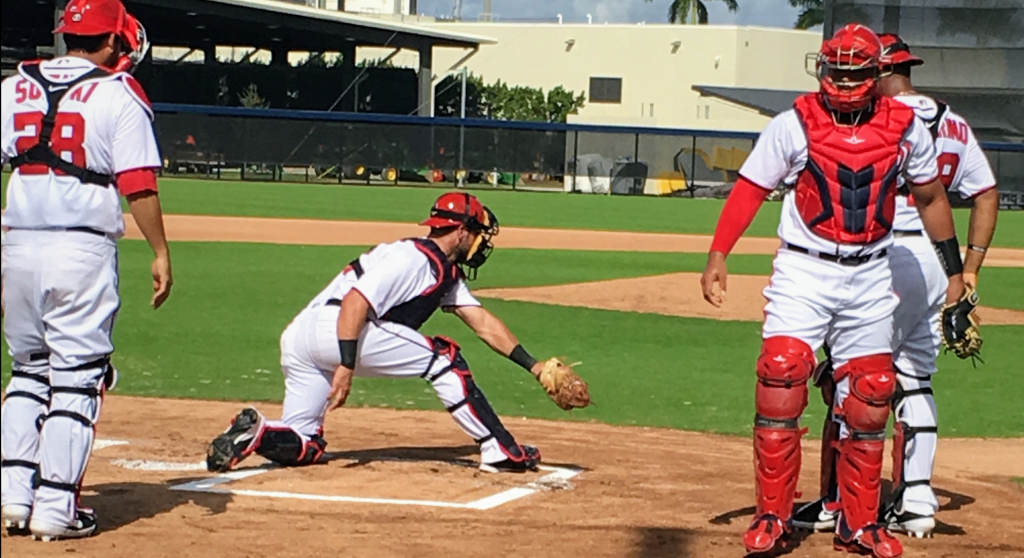 Then it was time for sliding drills. For those not familiar, they use sliding pads, a two-layer contraption with a top cloth that scrunches up when the player slides, and a bottom section that stays put. Players and/or coaches put the top cloth back after sliding. Here’s Suzuki about to land and the coaches putting the top back in place. I have more sliding photos if anyone wants them—and yes, Soto smiles when he lands. 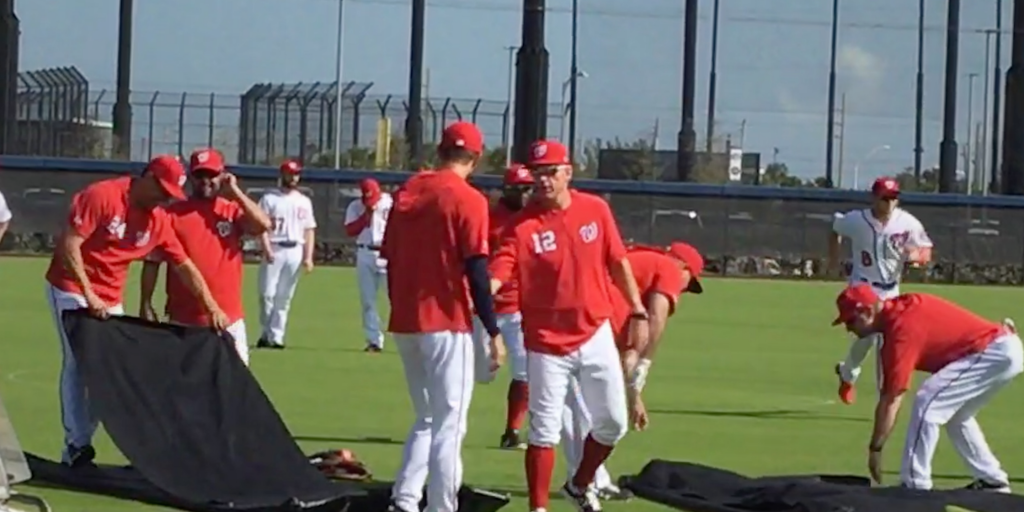 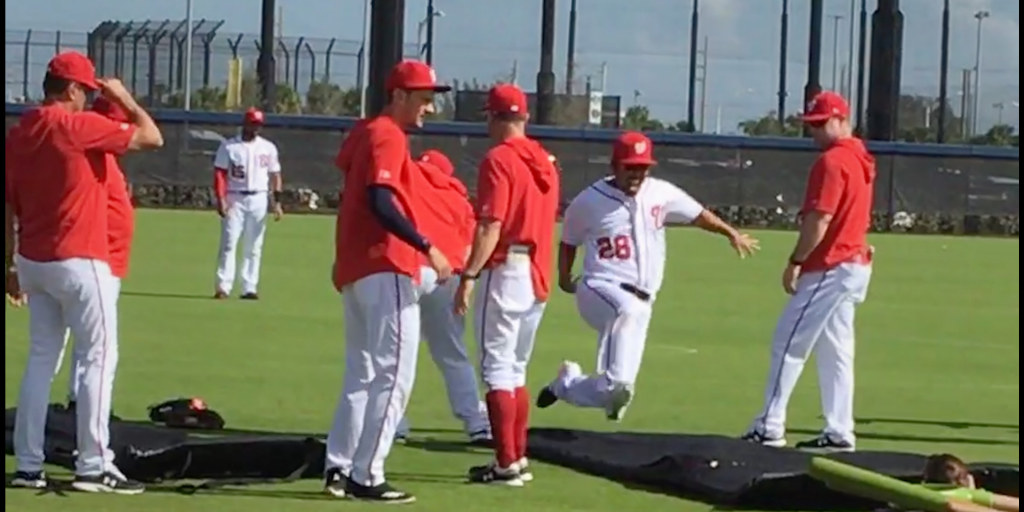 Pitchers took refuge in the batting cage pushed up against the screen while the catchers did receiving drills. One good drill involved a coach at second hitting a ball towards home that would bounce on the mound. Most of the catchers, most of the time, managed to corral the ball and tag out the “runner.” They also took throws from a coach at first base. Also note that Max always has a ball in his hand. 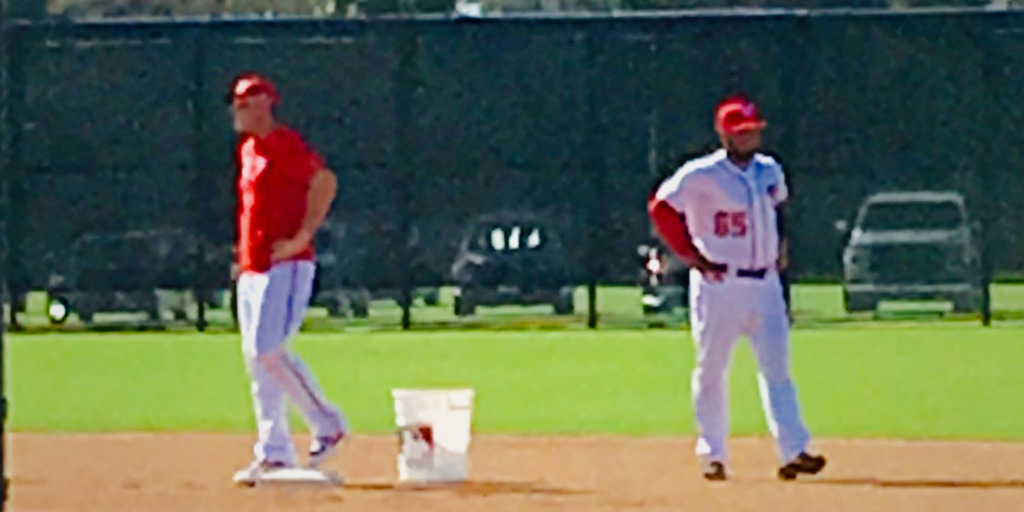 Then it was time for the “situational” drills (apparently 15, per Mark Zuckerman.) Henley, using his gym voice, called out the situation (i.e., runner on first, one out). The pitcher would throw a ball, the batter didn’t swing (in most drills), but a coach would hit or throw the ball to wherever it was supposed to go for that drill (trust me, that’s a little confusing to watch for a fan who’s used to “following A ball,” not “following all the balls, all the time.”). The situations included double plays turned, and a couple of rundowns. 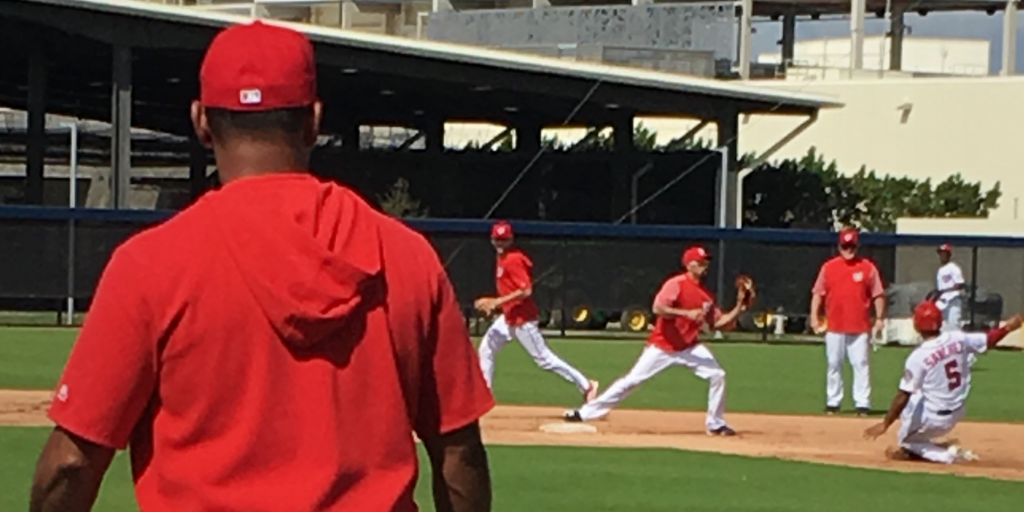 Live batting practice was next. There were four fields, but I heard Yan Gomes saying that he was catching Doolittle so I followed him. Sure enough, they were one of the pairs. Trea scared Doo off the mound with a screaming comebacker. Trea immediately said, “I’m sorry; I didn’t mean to do that!” (although he definitely meant to hit the ball). Trea also managed to lose his bat: he swung so hard that when the bat slipped it got stuck in the batting cage netting—not sure I’d seen that before. Not that I’m a scout or anything but Doo’s pitching looked pretty darn good, consistently low in the zone, although there were several batters who made contact. Doo got two strikes on Soto, but then Soto hit the third one as a grounder that might have snuck through. The catchers were calling the pitches: I saw Doo shake one off. 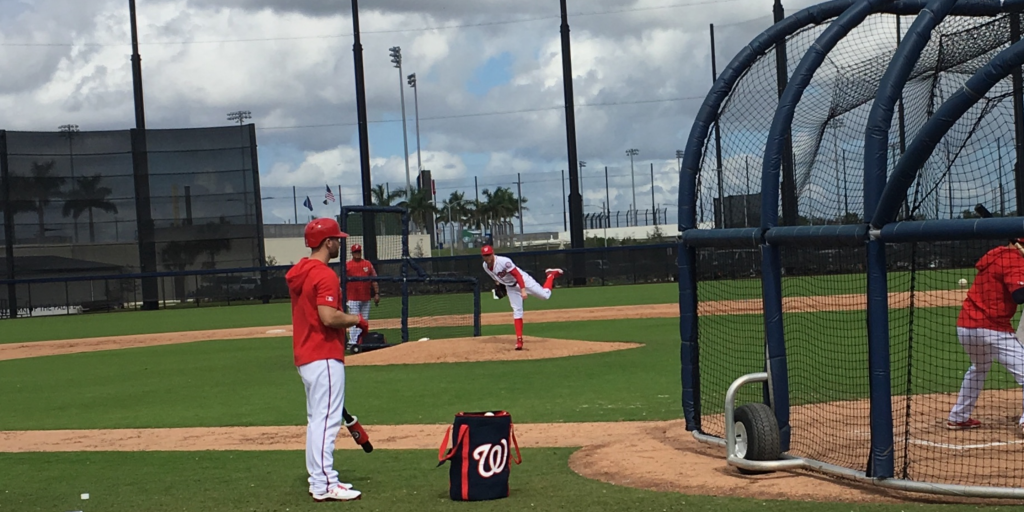 I moved over to another field and watched Miller and Hoover vs Zim, Robles and Eaton. And Zim still has his complicated swing. Hoover just seems to throw with a lot more effort than, say, Doo. Maybe that’s just his standard pitching motion. Needless to say, the hitters got more hits off Hoover, than, say, Doo.  After each pitcher’s live batting practice, the coaches would throw a few balls at them for practice fielding to first and third. Here’s Zim vs. Hoover. 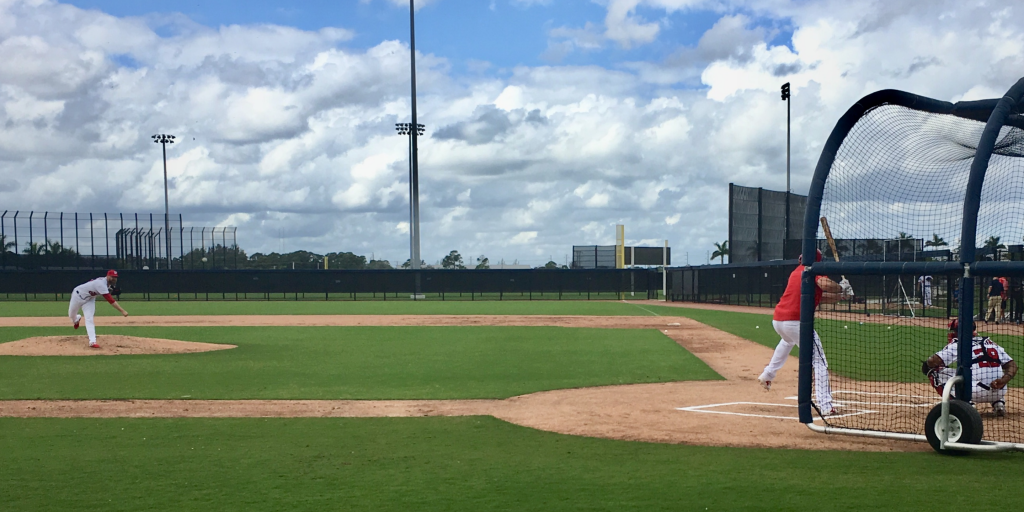 I couldn’t resist a shot of the photographer and Reynolds—she’s more flexible than the players on the field! 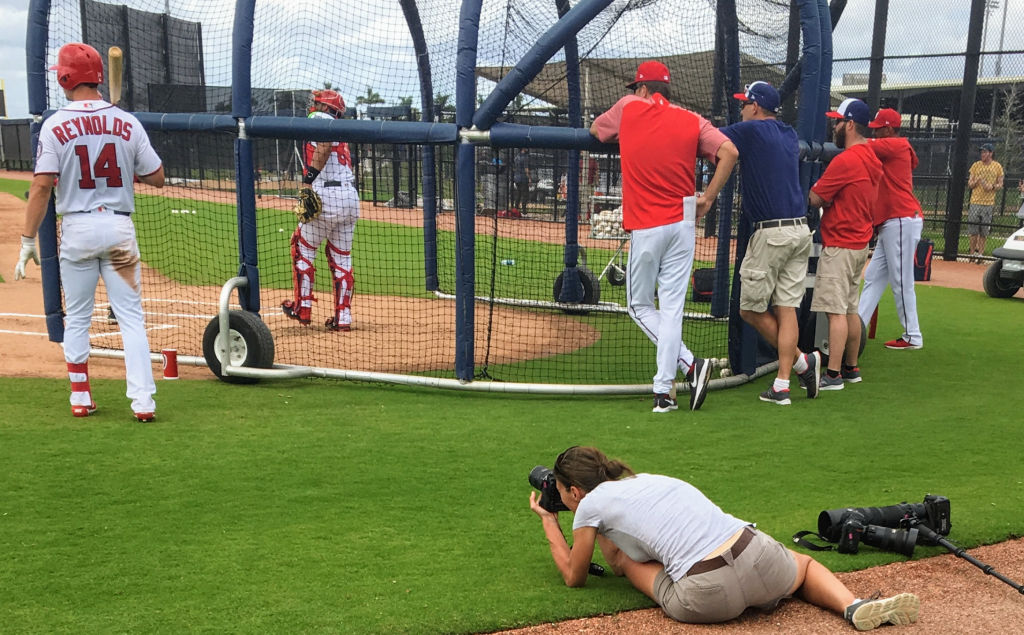 And Spouse caught a souvenir-on one bounce. 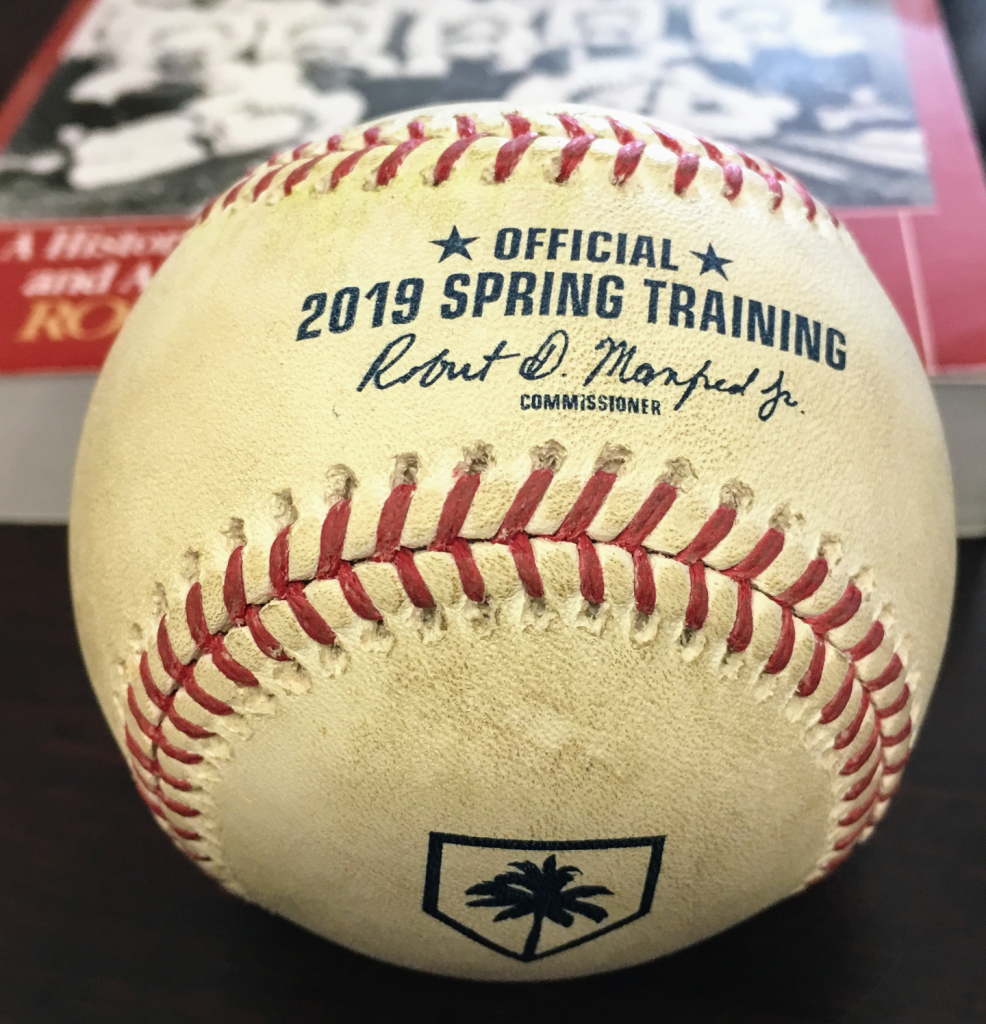