Posted on February 20, 2019 by ArVaFan aka Laura Peebles

As always, the workouts start with a Circle of Trust meeting. This one was complete with some bellowing from Henley—no, I couldn’t make out the words nor could I swear that actual words were involved. Henley is coated in SPF 1000 as always. (I think I figured out why, besides the obvious “skin cancer prevention;” his beard has looked grey for years, so no one will notice as it’s turning grey).

We arrived just as the Circle was starting, so we missed the injury caused by catchers’ batting practice (which happens before everything else). Raudy Read hit a major home run that bounced off the sidewalk and hit a fan in the eye. At least Read signed a ball for him.  I’ll follow up later on the injured guy since he’s friends with a guy from Sec. 314 who’s also down here. 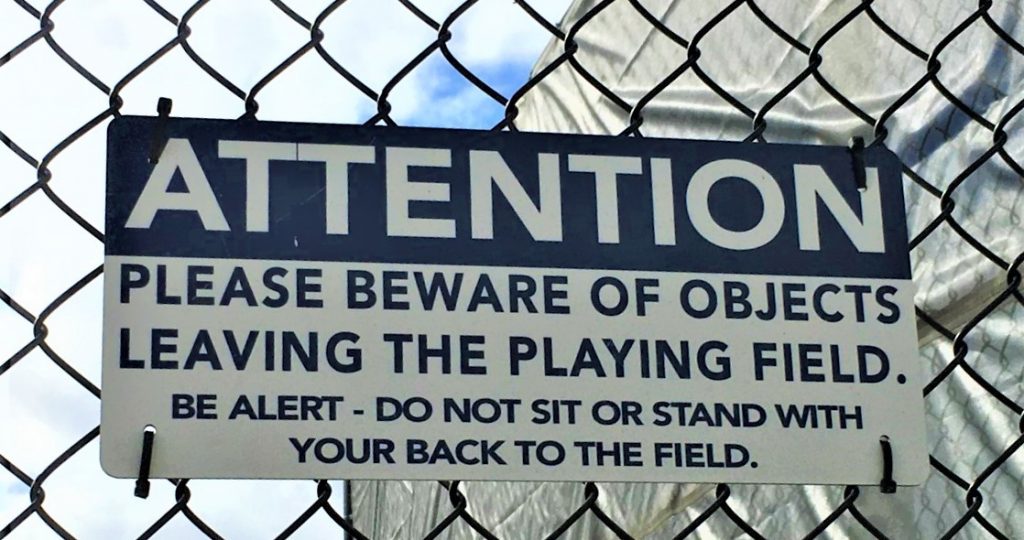 A guy at the fence mentioned that of all the teams he’s seen at ST, the Nationals are the ones who do the most talking vs. working out. He allowed as maybe the other teams do it inside, but I thought it was an interesting observation—especially when Davey continued the meeting at the field. 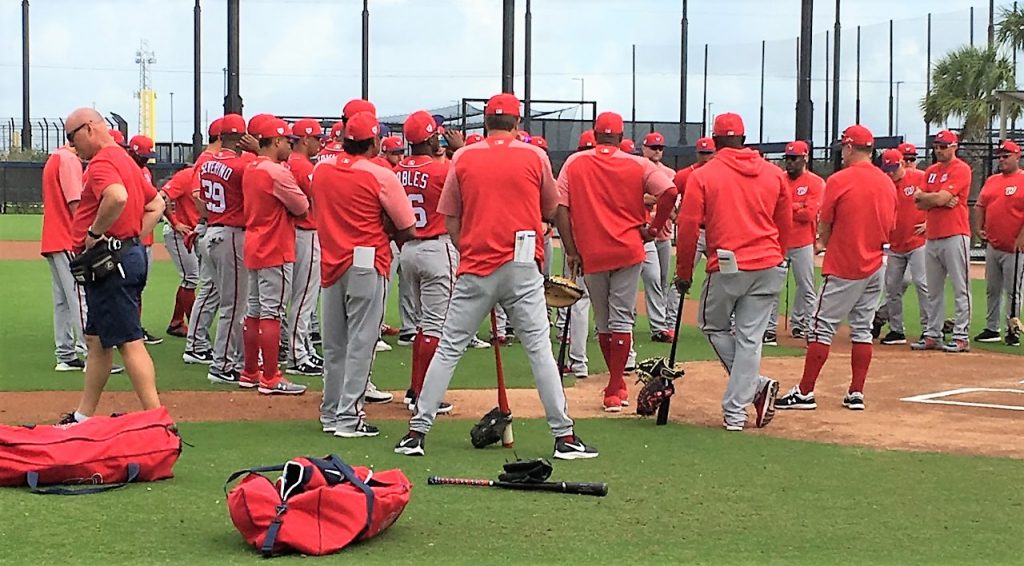 Some of the staff remembered me from last year (and were actually wondering where we were since they hadn’t seen us until today.  I think I’m using up my 15 minutes of fame on Spring Training).

After the Circle of Trust, the group broke up and headed to the fields for various drills. Many of them started with warm-up calisthenics.  In the past Gio was always the one who was one or two drills behind everyone else (or just talking and not stretching). I did catch Anthony, umm, losing focus once or twice. 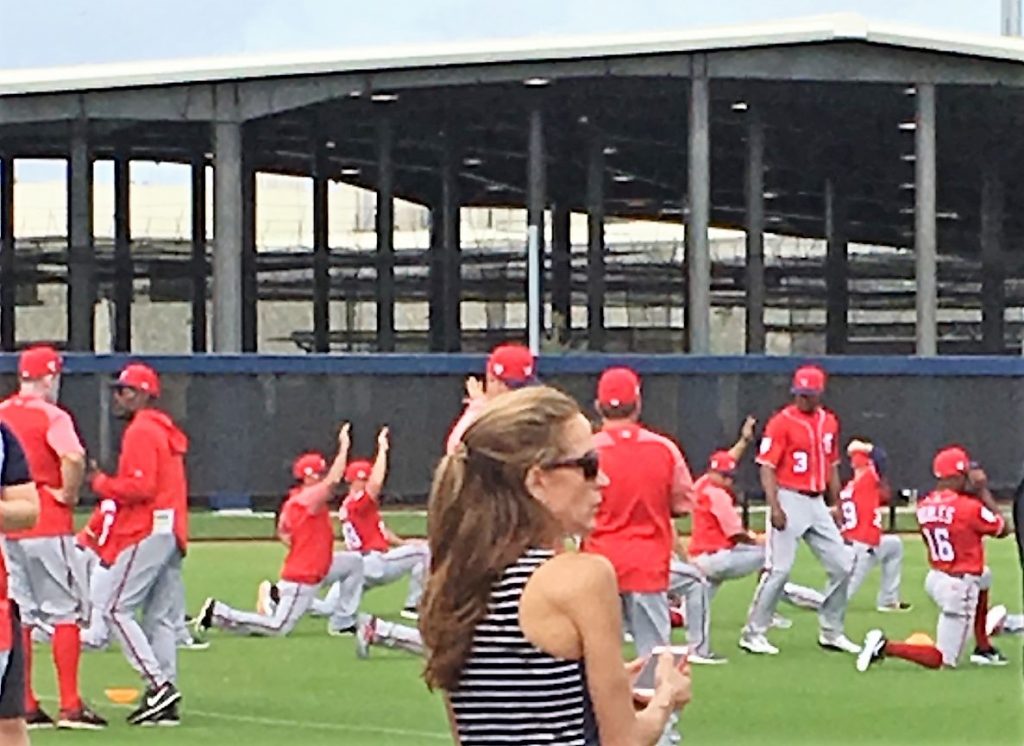 Today’s drills included grounders and double plays for the infielders. Three coaches hit the balls in the general direction of the fielders who take turns fielding the balls, although I noticed that a couple of times Matt and Ryan were getting balls at the same time. I didn’t notice Howie handling himself any differently at second than the other second basemen. Those drills looked pretty good, although I couldn’t say perfect by any means. While the infielders were doing that, the outfielders were doing catch and throw in drills in the back of the same field (Stevo, Soto, Robles, Eaton).

Then I watched the catchers doing pickoffs/caught stealing at first and second. Geez, they need more work on that. The second baseman did a lot of leaping for balls and still didn’t get them all. I can’t say that any one catcher was better or worse than the others, although I wasn’t videoing them for analysis like the Nats were. Speaking of cameras, I was speaking with Kyle Brostowitz and mentioning the number of cameras (ESPN, MASN, Nats internal video folks). He said that he’s glad to see the Nationals getting the attention—better to get the attention than be ignored.

Kyle also mentioned that they have not replaced Valerie Camillo—her duties have kind of been spread around [author’s note: yeah, and the lack of a person who is focused on the fan experience shows, and it doesn’t say good things about the team, either. Rant mode off/.]

Pitchers’ fielding practice included both relief and starting pitchers (except the ones who were throwing to live hitters—Strasburg and Fedde). After Max covered first he’d keep the ball and fidget with it as he moved back up in the line of pitchers, only dropping the ball when it was his turn to field again. He seemed to be yawning a lot—wonder if the kid kept him up. 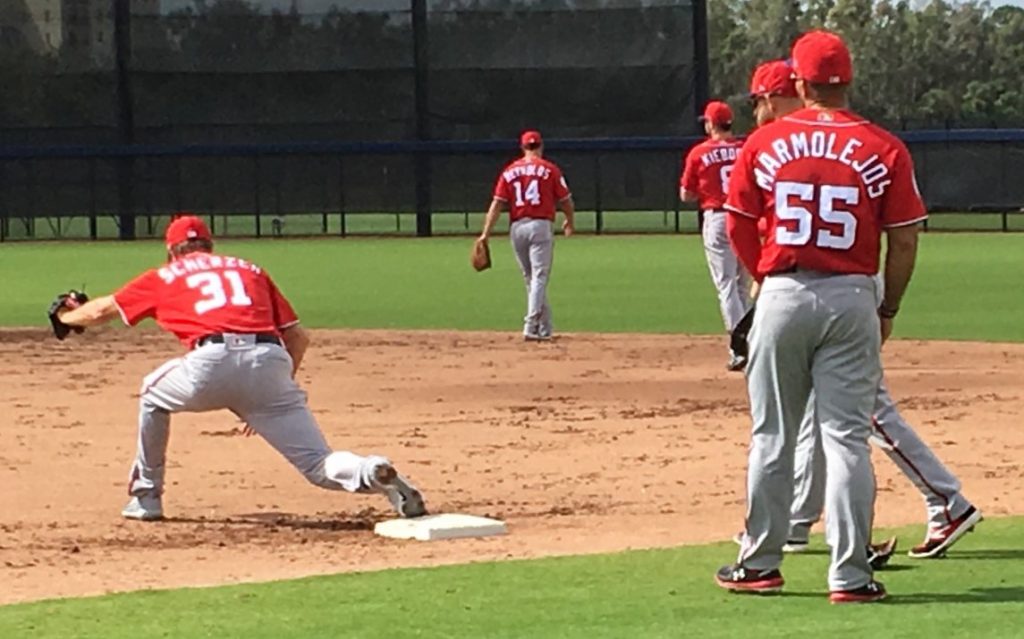 Speaking of pitchers, Strasburg alternated with Fedde today in Field 4, followed by McGowin. As far as pitches in the zone, Stras was way ahead of Fedde. Soto and Matt Adams were among the hitters who actually swung at the pitches.  Juan Soto things: swing, hit, grin, repeat. MAT swung too, facing McGowin, and did managed to connect. Soto definitely hit a few that looked as if they would have been hits. Matt connected on a couple, too. Stevo did get one solid hit. I’m no scout, but I think McGowin looked better than Fedde. 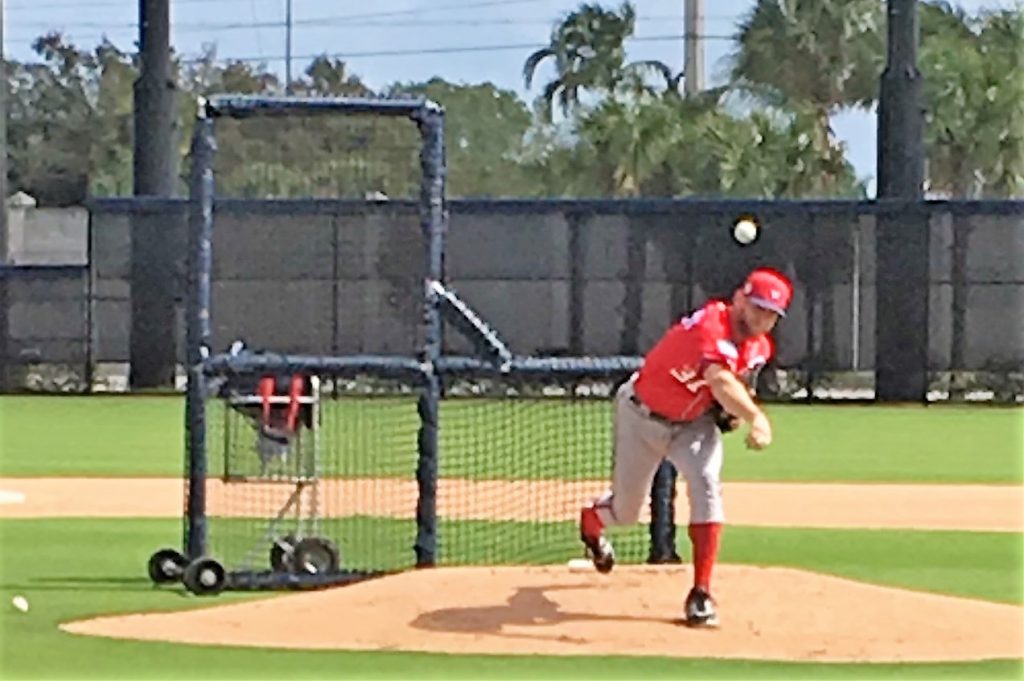 At the end of each pitcher’s session, they did pickoff to first and second practice. The coaches had to tell Sevy to slow down the sign-calling:  apparently he was flashing it so fast that the pitcher wasn’t seeing the sign (while obviously trying to “hide” the sign from the runner).

I caught the end of Barrett’s pitching session.  I don’t think he was that accurate (okay, he didn’t hit anyone). Carter Kieboom got a nice hit off Nuño 45.

I did get Davey to sign my cap (offered him the chance to be the first signature and he took it). Rizzo followed. We chatted about Italian restaurants, his dad (in good health, still doing scouting in the Arizona Fall League), and his wearing a cap (yes, Henley’s been a good influence on him). 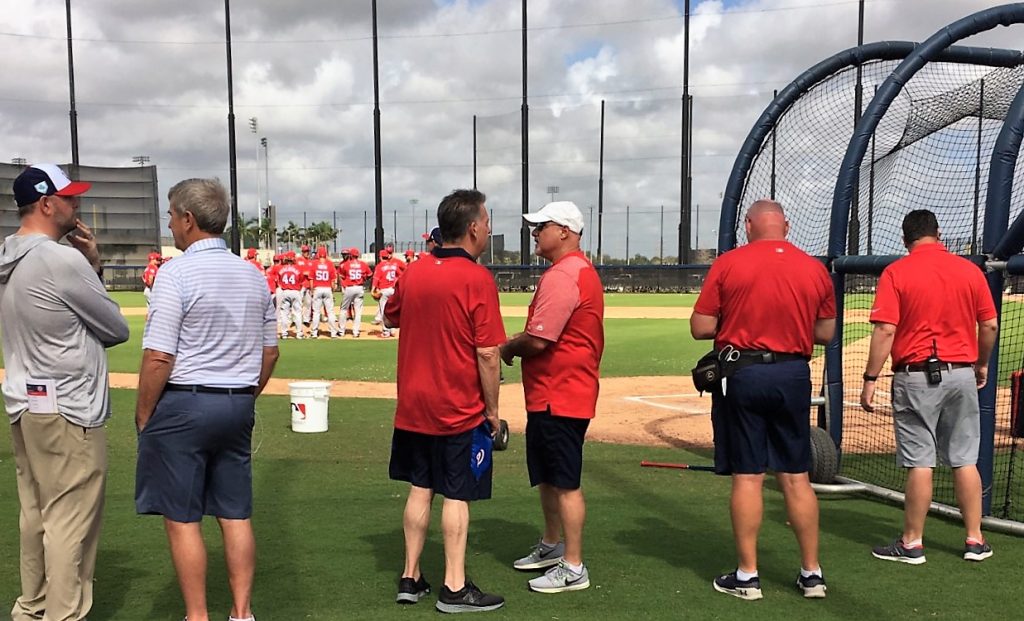 PS:  There were dozens of fans at the park, local and down from DC. The only Harper jerseys were on young kids.