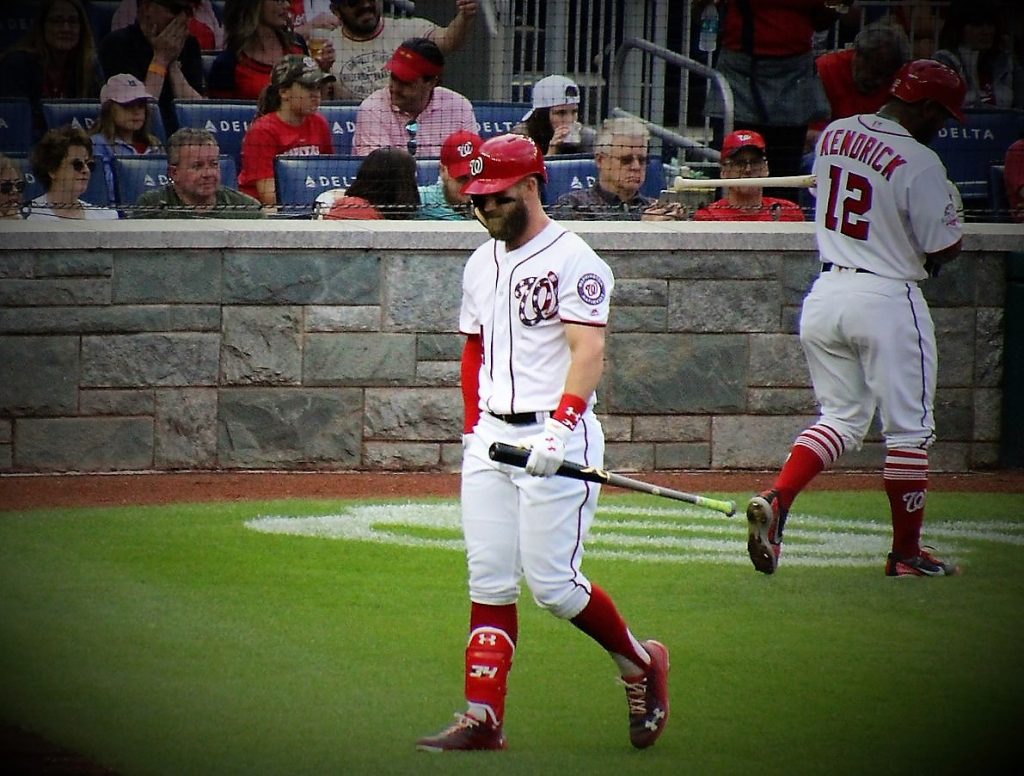 Where is Bryce Harper going? (Photo by Marlene Koenig for TalkNats)

Famed Austrian physicist Erwin Schrödinger devised a thought experiment to explain quantum mechanics back in 1935. Schrödinger posited a scenario, which (slightly simplified) goes like this: A cat is inside a box, and if a particular event happens inside the box, the cat will die. Otherwise, the cat lives. But there is no way for an outside observer to see inside the box during the experiment. (We assume, in this thought experiment, that the cat has access to an unlimited supply of food, water, oxygen, tummy rubs, and whatever else it needs to stay alive.)

Schrödinger’s goal was to demonstrate the absurdity of a competing theory of quantum mechanics. The cat can either be alive or dead. But while it is inside the box, engaged in this experiment, the observer must treat it as if it is both alive and dead.

Ultimately, Schrödinger fled the Nazi occupation of Austria and spent the rest of his career in Ireland. He died in 1961. But if Schrödinger had lived well into his 80s, and if he had come to North America instead of Ireland, he might have found work in a baseball front office in the era of free agency.

The Washington Nationals face a version of Schrödinger’s paradox right now, as home-grown superstar Bryce Harper ponders a decision that has been years in the offing. The free agent Harper is being aggressively courted by the division-rival Philadelphia Phillies. He has also been linked to the Chicago Cubs, the Los Angeles Dodgers, and the Chicago White Sox. Of course, Harper has also stated on many occasions that he loves playing in Washington, D.C., and likes the idea of wearing a single uniform through his entire career.

The Nationals have had to operate this season as if Harper’s Nats tenure is simultaneously alive and dead. There is no way to see inside Harper’s mind, and his camp isn’t divulging a whole lot of information this winter. Last week, multiple reports suggested that the Nats were the favorites to retain Harper; on Sunday, multiple reports (most notably from USA Today‘s Bob Nightengale, quoted below) are suggesting Harper is likely to sign with Philadelphia.

[T]he Phillies have become the most aggressive team in their pursuit for Harper while the Nationals’ interest appears to be waning. Nationals executives are now calling a reunion with Harper a “long shot.’’

That jibes with what Nats principal managing owner Mark Lerner told the media last month in an unusual candid interview with Grant Paulsen and Danny Rouhier on D.C. sports radio station 106.7 The Fan. Lerner, who took over day-to-day duties from his father, Ted, last year, said:

I really don’t expect him to come back at this point. I think they’ve decided to move on. There’s just too much money out there that he’d be leaving on the table. […] It’s hard to see somebody like that go, but unfortunately it’s a strong possibility that’s going to happen.

According to a source, there is momentum building toward Harper’s return to Washington, while the Phillies — who are set to meet with Harper this week in Las Vegas — appear to be turning up their pursuit of Machado.

Has something changed? Was Feinsand’s source wrong? Are Nightengale’s sources wrong? It wouldn’t be the first time. Here’s a story in three tweets about another fight over a top free agent between the Phillies and Nats from earlier this offseason:

The #Phillies are making it clear to marquee free-agent starter Patrick Corbin that they won’t be out-bid, and teams still in the hunt for Corbin’s services realize it, too.

Nationals have agreed to terms on a deal with Patrick Corbin, according to a person familiar. Pending physical.

Source: The #Phillies (Like the #Yankees) weren’t willing to go beyond 5 years in their contract offer. So it appears that it really came down to the #Nationals willingness to give Patrick Corbin a 6th year.

Nobody really knows what will happen next. Nightengale even left himself some wiggle room in noting that the Phillies could instead sign Manny Machado, whom Feinsand and other reporters have tabbed as their top target, and exit the Harper sweepstakes.

In the meantime, the Nats have been building a World Series-caliber team. General manager Mike Rizzo’s latest touch was to add veteran second baseman Brian Dozier on a one-year deal. Dozier is coming off a down year, which is the only reason a 31-year-old Gold Glover who smashed 104 home runs over the previous three years with the Minnesota Twins was available on a one-and-done contract. The Nats are hoping he will rebound and provide a source of right-handed power to pair with lefty slugger Juan Soto in the heart of the order, while representing a defensive upgrade over former incumbent Daniel Murphy.

Aside from inking Corbin and Dozier, the Nats’ two highest-profile free agent signings this winter, Washington has also landed two high-octane ex-closers in Trevor Rosenthal and Kyle Barraclough, secured the services of two of the game’s finest all-around catchers in Kurt Suzuki and Yan Gomes, and exchanged declining veteran Tanner Roark for resurgent veteran Anibal Sanchez to fortify the back end of the starting rotation. Rizzo is in a pleasant position. He doesn’t have to do anything else.

The Nats will likely spend the rest of the offseason taking advantage of another sluggish free agent market to scoop up overlooked players with a bit of upside on minor league deals with invitations to spring training. Jamal Collier of MLB.com said Friday he expects a few more signings in the mold of Henderson Alvarez, players who could challenge the likes of Joe Ross for major league roles in spring training.

At the same time, the Nats are keeping an eye on that box in the corner. They don’t know whose uniform Harper will be wearing when he reports to spring training camp, whether in Arizona or Florida. And we fans can’t see inside yet another box: We don’t know the truth of how interested the Nats really are, or the Phillies, or anyone else, and what kind of contract they’re prepared to offer to back that interest up. Harper’s time with the Nats is either alive or dead. The Nats’ hopes to retain him are either alive or dead. And as far as anyone from the outside can tell, they’re both.