The Nationals payroll after the Brian Dozier acquisition and all of the arbitration moves will be approximately $10 million from the CBT cap of $206 million, but with bonuses and incentives the Nationals have about $3 million of buffer to either spend now or wait for the July 31 trade deadline -or- they can make a couple of moves like a creative extension of Ryan Zimmerman‘s contract and possibly a trade which makes things more complicated — but not outside the realm of possibilities.

The Washington Nationals now know their worst case situation with the two players who have filed for arbitration hearings. With Sammy Solis ($850,000), Joe Ross ($1 million), Trea Turner ($3.725 million), and Anthony Rendon ($18.8 million) all inked for the 2019, it just leaves Michael Taylor and Kyle Barraclough to be resolved. If we used the players numbers for Taylor and Barraclough in terms of salaries and go to the high side of the numbers, the Nationals payroll would be $195,733,300 prior to any incentives or bonuses. Of all of the arbitration numbers, only Rendon exceeded the MLBTR estimate which seems to be the pattern with Scott Boras prominent clients as they routinely beat the MLBTR estimates. We saw that repeatedly with Bryce Harper and Stephen Strasburg as well as Rendon. In case you were not aware, this is the final year of arbitration for Rendon before he could possibly become a free agent. There is much hope that the Nationals will do an extension with Rendon which they could do as a separate deal now and not effect his AAV for 2019.

As an aside, Tanner Roark received $10 million from the Cincinnati Reds to avoid arbitration which is $2 million higher than Anibal Sanchez‘s 2019 base salary. After Roark was traded, it was Sanchez who was acquired and appears to be slotted into the 4th spot in the starting rotation. Sanchez also has the opportunity to earn incentives for 2019 of $2 million which is payable based on $500,000 each for 18, 22, 26 and 30 starts. In addition, Sanchez also deferred $2 million of his base salary.

With Brian Dozier’s deal closing in on being official at $9 million, the Nationals will have to make a 40-man roster move to make room for the new second baseman. There are many candidates for a DFA as well as for a trade. You can expect Dozier’s official announcement has been delayed to allow general manager Mike Rizzo time to make a move -or- he could have made the DFA already and waiting for that player to clear waivers. Possible names on the list of DFAs are Pedro Severino, Matt Reynolds, Austin Adams, and Trevor Gott.

As most baseball fans are aware, the Philadelphia Phillies sent a delegation of sorts to visit Bryce Harper in Las Vegas where the table will be full with Phillies team owner John Middleton, GM Matt Klentak, manager Gabe Kapler, and Harper’s agent Scott Boras all expected in attendance. Middleton had stated back in November that he intends to spend money this off-season and “maybe even be a little bit stupid” about it, but when the opportunity came up to spend “stupid” on Patrick Corbin — the Phillies did not push the button on the cash register. So far, Middleton’s words have been empty when he has had the chance to spend “stupid”. In fact, USA Today columnist Bob Nightengale declared that Middleton’s Phillies would not be out-bid on Corbin which they were, and Nightengale’s tweet did not age well.

Of course former Nats G.M. Jim Bowden believes that if the Nats got Harper back, they will win the World Series. Let us hope Jim Bowden is right on this one!

While Bowden gets bold, Tom Boswell wrote a nice article that took it a step further and feels that Alex Ovechkin was 0-9 before he got his parade in Washington, D.C., and if Ted Lerner gets Harper back in a Nationals uniform, it could be Lerner and Harper who will be future statues on the south side of Nationals Park!

Thomas Boswell writes, “Oh, brother. If all that falls in place, we can start designing the statues of Ted Lerner and Harper that will probably be placed in front of Nationals Park someday, near Walter Johnson, Josh Gibson and Frank Howard.”

“Oh, yeah, this would be a statue moment. Right now, Nats fans face an alternative of two states of baseball grace: ‘Wow, what a winter,’ and flat-out OMG!”

“Lerner deserves bronze already for buying a team for his hometown in 2005 and helping to catalyze the birth of the Southeast waterfront by building an organization that, just seven years later, won the first of four NL East titles.”

Now who wants to think about what Mr. Boswell was ultimately referring to with “If all that falls in place” which seems like he is ready for Mr. Lerner to blow-up the 2019 CBT cap to get Harper and try again for another postseason run. There could be 330-to-350 million reasons for the Lerners to stick to what they have now, but hey, it’s only money!

Last night, we exchanged tweets with Sean Doolittle who has been very engaged on recent articles in Forbes about the decrease in spending by teams in relation to revenues. When Doolittle made his tweets as an employee of the Nationals, he needed to be clearer in his remarks as his audience is large and the comments were quickly misinterpreted by many fans who thought he was commenting negatively about his employer (Nationals) who are part of the “industry’. While Doolittle was correct that the industry as a whole cut back on spending last year in relations to revenue, the facts are that the Nationals spent more than any other  team in total revenue to payroll dollars in baseball. Doolittle was kind enough to respond to our tweet and  acknowledge in a clarification that the Nationals were not an issue.

Well your team isn't one of the offending teams. #NATS

This is true! They spend money every year to put a winning team on the field. And the fans have shown their appreciation and support by filling up the ballpark. I am very lucky to be a part of this organization.

If you thought investing in player pay was down last season, here’s what shows you were right… Economic Data Shows MLB Spent Less On Player Salaries Compared To Revenues In 2018 via @ForbesSports https://t.co/dmuxrFOEmX pic.twitter.com/4iN8PguBDp 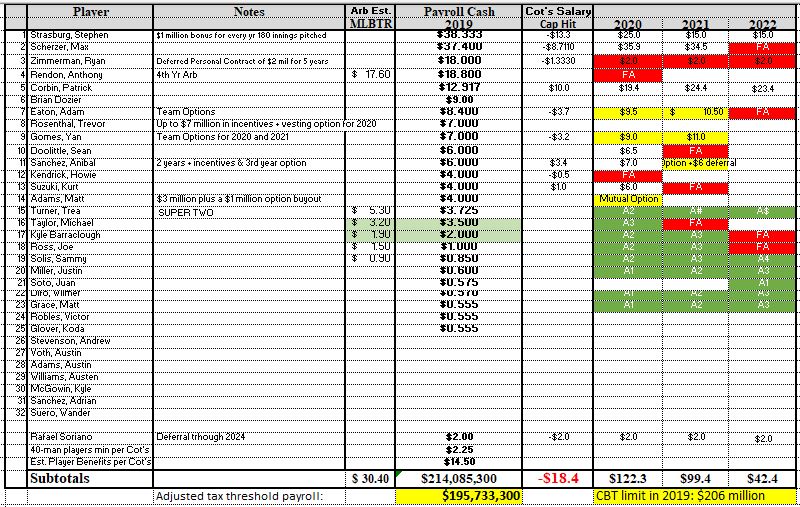