It is time to extend Ryan Zimmerman to a restructured deal! 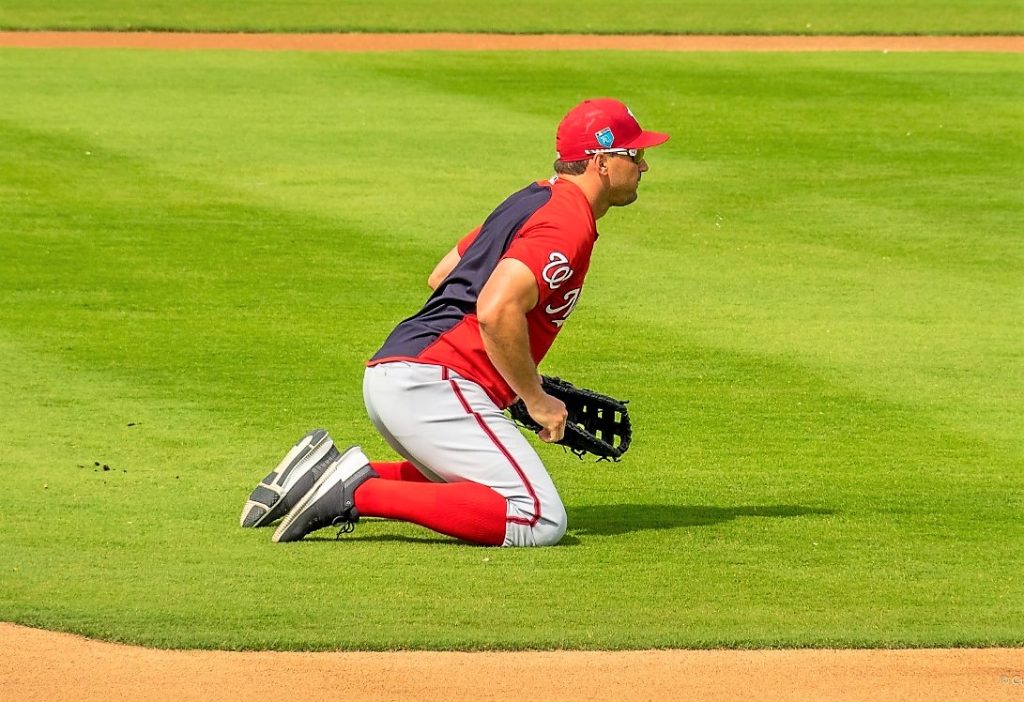 Zim’s 2018 Spring Training on the back-fields; Photo by Craig Nedrow

For months our readers here have discussed our suggestion about the advantages of extending the contract of the face of the franchise for the Washington Nationals. In case you did not know, Ryan Zimmerman happens to be one of the top offensive players in baseball when facing left-handed pitching which is one of the reasons to retain him for a few more years at a lower salary. There is a perfect storm of need brewing for the Washington Nationals and Zimmerman because he wants to stay with the Nats, and the team needs to lower their 2019 payroll. They can both accomplish these goals together creatively speaking. The Nats can actually lower payroll by extending Zimmerman’s contract to include the 2019 season and at a market rate for the 2020 and 2021 season which would take Zim to his retirement at the age of 37.

For the two-time All-Star, he has repeatedly said he wants to extend his career in Washington, D.C., but determining his future value could be the sticky point. With Matt Adams signed to a new $3 million deal for 2019, the market seems clear what a 30 year old Adams is worth — but what would Zim’s value be for his age 35-36 season and his age 36-37 season? Would Zim agree that Adams’ salary is his true value? Hopefully he would as the 34 year old first baseman once again hurt his value by spending too much time on the DL and playing poorly for the first month of the season. Zim finished with just a +1.3 WAR that ranked at only the 22nd highest ranked among 1st basemen in 2018 while he is among the highest paid at that position and set to pocket $18 million more in 2019 if no renegotiation happens.

If the Nationals wrapped Zimmerman’s 2019 salary into a new 3-year deal with 2020 and 2021 valued at $3 million each for a new $24 million deal paid out in equal $8 million installments the team could slash $8.333 million off of the CBT payroll giving the team’s General Manager, Mike Rizzo, that cash to finish off his roster for 2019. This becomes mutually beneficial for both sides, but of course the MLBPA would have to ratify the deal which is never a given. Zim has been publicly campaigning for an extension because there is no way the team will pick up his 2020 team option at an additional $18 million. After Zim’s career ends, he will enter into the personal services portion of his contract with the team and receive a $2 million a year salary working on the business side at Nationals Park.

“I don’t think it’s any secret I’d like to finish here [with the Nationals]. I’m really optimistic about what will happen, and it goes back to me just staying healthy and playing to begin with,” Zimmerman said. “It’s on me. If I want to continue playing, I have to prove that I am worth it to keep investing. I still would like to get compensated fairly, but it’s not like I am going to go somewhere else and play for an extra couple bucks.”

Zimmerman fell out of favor with many in the fan base when he skipped almost all of Spring Training before the 2018 season and it was rumored that he was hurt. His start to the season was a struggle in the month of April as he played almost every day and batted only .184 during the month while stranding runners by the dozen each week during the month.

So @JonHeyman is reporting that Ryan Zimmerman has also been dealing with a calf injury during his time off for the oblique. Apparently the calf injury is why he missed spring training via the report. Seems odd that never came out publicly.

Since 2011, Zimmerman has missed an average of exactly 50 games a season over that 8-year span while only averaging a .798 OPS since he initially played first base back in 2014. Zimmerman has also been a combined negative fielder at first base with a career -5.6 UZR rating, and his arm has cost the team on throwing out lead runners and starting doubleplays. If you expect Zimmerman’s defense to improve in the future, it might not happen given age regression and Zim’s own words that he might have to stop diving for balls as that has taken a toll on his body.

“I take a lot of pride in defense and try and dive all over the place. It might be time to stop doing that stuff,” Zimmerman said.

The good news is Zimmerman can crush left-handed pitchers and ranked 4th best in the entire majors last year at a 1.143 OPS. The issue is Zimmerman’s batting against right-handed pitching has been poor and in 2018 he struggled in each part of his slash at .228/.289/.429/.718. With Matt Adams discovering the advantages of pilates, he became a cat at 1st base posting his best adjusted UZR/150 to a +5.7 on defense. Adams was also looking like an All-Star last year with a .927 OPS through the All-Star break, but for some reason Nationals’ manager Dave Martinez relegated Adams to the bench in the season’s second half and Adams fell apart without regular playing time. Adams was also excellent in RISP spots batting over .300 and slashing 1.004 for the season after you consider his awful second half. There was a point when Adams was batting over .400 in RISP spots.

With Adams and Zimmerman both available, match-up baseball makes sense. This is where these Mike Rizzo teams must change their past with favoring high-priced veterans. The money is spent so go with your best regardless of who is getting paid what. That does not mean a straight platoon, but it does mean taking the sum of the parts to give you a value greater than forcing a square peg in a round hole.  This concept goes back to putting your players in their best situations to succeed. This goes to not continuing what is not working. It sounds so simple except the Nats have shown a consistency in playing struggling high-priced veterans like Jayson Werth, Matt Wieters and Zimmerman when the team had other alternatives. The stats in large sample sizes tell you it was not working well before.

“At some point, if you want to be here, you have to make some sacrifices,” Zimmerman said. “I’m not going sit here and say I’m willing to play for the league minimum, but for me to play here would be the ultimate goal, to finish my career here. I’m been very lucky to be in the situation I’ve been in.”

“I grew up in Virginia Beach, went to school at the University of Virginia and played in D.C. for the better part of 14 years, with my parents being four hours away. It’s been a very special place growing up here. I came to D.C. as a 20-year-old. Now I’m married and have two little girls.”

“This community in D.C. has been special to me. It would be really weird to play anywhere else. I don’t envision myself chasing anything anywhere else, either. I’ll continue to work my butt off, be in shape every year to play and help this team win. When it comes time I can’t do it anymore, then it’s time to go home.”

For Zim, he has only played for one professional team in his entire career, and even with the shenanigans of hiding injuries, he is still a very popular athlete in D.C. sports. If the Nats are going to extend Zim’s deal — you might as well do it now to average into a more advantageous CBT payroll for 2019. Also,  “Mr. Walk-off”  is chasing history in pursuit of Jim Thome who has 13 career walk-off home runs followed by Jimmie Foxx, Mickey Mantle, Stan Musial, Albert Pujols, Frank Robinson (Zim’s 1st manager), and Babe Ruth who all have 12 walk-off home runs, and Zim is tied with David Ortiz and Tony Perez with 11 walk-off home runs.

By splitting time at first base as well as the catcher’s position and possibly even second base if there is a new left-hand batting acquisition, the team would be joining all of the teams who have already committed to intelligent analytics. Smart match-ups are based on analytics not straight lefty/righty platoons where players only bat against the opposite-handed pitchers. There are many right-handed starters for instance who Ryan Zimmerman hits well like Nick Pivetta, Vince Velasquez and Zack Wheeler, but makes little sense to bat him against Kyle Hendricks (0-18), Tyson Ross and Jeff Samardzija.

Last season in a key game against the Cubs, Martinez started Zimmerman against Hendricks when he had a better alternative on the bench in Mark Reynolds who was hitting the Cubs righty at a .714 average with a 1.921 OPS. When Martinez talks about the “little things” which he does incessantly, he needs to stare in the mirror because many times the little things begin on the tip of his pencil when he signs that line-up card.

This entry was posted in MattAdams, RyanZimmerman. Bookmark the permalink.
← Previous Article | Next Article →